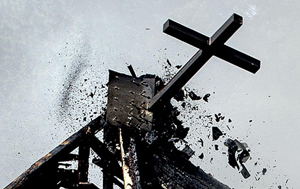 Grace Life Church Must Be Crushed By Covidstan, before it inspires others! Covidstan’s true intentions have been hiding in plain sight nearly the whole time, but our collective desire for a return to normal caused us to deny this reality and thus sound the alarm. Whatever percentage of this is really about public health concerns during a pandemic is dwarfed by the percentage of this that is not.

Otherwise known as the statists’ two primary objectives in all things – power and control.

When they come at you in public spaces, they make it abundantly clear power and control is what is driving them and not the fear of a virus. When they proceed with a draw-out confrontation that could’ve altogether been avoided, the contagion isn’t their actual cause.

They yell and they scream, spreading their supposedly damning breath vapor well beyond their virtue signalers, see that as masks, while demanding school clarinet players be zipped inside a plastic coffin. Such ridiculousness isn’t malfeasance, but malevolence. These people are not dumb. They just think they should rule you, and getting you to comply with such tomfoolery confirms to them that you agree.

The pastor has been jailed for hosting church services, his church has been barricaded with fencing to keep worshipers out, and riot police were sent in to drive off those who began tearing the fencing down. Who says American's have fallen to secularism, they’re now “rioting” to get onto the church grounds!

More than a year into this pandemic, we know with absolute certainty who this virus hits hardest – the elderly, chronically ill, immuno-compromised, and obese. It’s not a thief in the night. Those who are vulnerable can self-isolate and take whatever precautions they deem necessary. Because the data is in, and the latest estimated infection fatality rate is (thankfully) a meager 0.15% according to a recent study published in the European Journal of Clinical Investigation by Dr. John Ioannidis of the prestigious Stanford University.

For most people living in a place called reality, the verdict of science is that there is little to actually be afraid of for most of us. Especially with promising drugs like Ivermectin, the Regeneron antibody cocktail, and now vaccines on the market. And relative to the panic porn the mainstream media relentlessly delights in non-stop, there never really was. Much of this data has been known and stratified for many months now, as we document in our new book Faucian Bargain: The Most Powerful and Dangerous Bureaucrat in American History. A book which contains more footnotes than pages, and lays bare all the substantial sins of America’s Dr. Anthony Fauci and public health tyrants like him across the globe.

Nevertheless, many places across the world, welcome news is met with more goose-stepping stormtroopers who press even harder on liberty’s throat. Such as governement shock troops raining the statist wrath upon a House of G*d like fire and ash upon Sodom and Gomorrah, or the plagues that visited Egypt.

Can you see it? Can you see what is truly going on here? Think also about the White Witch in Narnia, riding into battle while wearing the slain Aslan’s mane as adornment. And now remember the “normal” you are dying to get back to. Those freedoms ensured long ago by a people who believed in and fought for liberty, not because they thought it to be merely a selfish option among many others, but because it was ordained by G*d Himself. As the the famous saying says, “May G*d bless America!” (but will He after we distroyed His home and people?)

Make no mistake about it, though, that is what the tyrants of Covidstan hate the most.

That’s why the church has to come down, for everywhere where G*d is worshipped you are also proclaiming the state is not a god. That the state must bow to G*d as well, and statists are also jealous gods. They will not share their glory with another.

What is being done to Grace Life church isn’t really about Covid at all. Covid is merely the excuse for the statists to treat the church as they have always wanted to – with maximum prejudice. There will no be no more room at the statist inn unless you bow the knee and confess the state is lord.

Covidstan will demand you choose this day whom you will serve – freedom and your Creator, or the state. And there will be no in-between.

“May G*d bless America!” (but will He after we distroyed His house and people?)