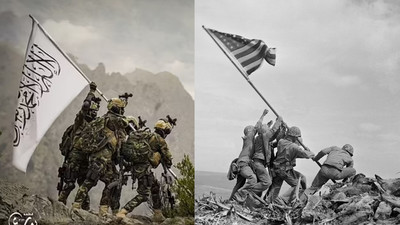 Is The Horror In Afghanistan The Cost For the Democrats’ Green New Deal And $7 Trillion Spending Spree?

With all eyes on what is going down in Afghanistan, where O’Biden has millions of people worldwide worried about the fate of thousands of Americans, and Afghans abandoned to the monstrous Taliban by the United States of America, House Speaker Nancy Pelosi got away with a middle of the night sneak attack on the country she was elected to serve.

Is Sneaky Joe planning to spring a U-Turn by ceasing to ‘negotiate’ with the terrorists, performing an 11th hour stand-up to the Taliban to try to come up smelling like a rose, now that Pelosi has rammed through her $3.5 trillion Green New Deal spending package under the cover of “infrastructure”?

Pelosi’s inglorious leader has until August 31 to bow to Taliban leaders’ Get-out-of-Dodge ultimatum.

This is how ConservativeTreeHouse described this latest Democrat outrage: “As you are reading this, Nancy Pelosi has pulled together her leadership group overnight to change the House rules for legislative passage of the $3.5 trillion Green New Deal spending package under the auspices of “infrastructure.” (ConservativeTreeHouse)

“This $3.5 trillion spending bill is in addition to the $1.5 trillion infrastructure bill that came from the Senate, and… she is using the $2 trillion budget package as the carrier for a slick “Deem and Pass” maneuver.

“As we have seen before, right now Pelosi is changing the House rules to have a single vote on the current budget proposal which will include a ‘deem and pass’ provision that adds the $3.5 trillion Green New Deal spending package to it.

“By voting to pass the omnibus budget bill, all House members will also be voting to authorize as passed the additional $3.5 trillion GND as a wraparound.

“This means one single vote passes this massive social engineering project with more than $5.5 trillion in spending in a single bill. Thereafter, the House will vote on the Senate bill separately to add another $1.5 trillion, bringing the total spending by the House before they depart to a whopping $7 trillion; forever changing the American landscape.

”After several hours of discussion and conference with a group of 10 ‘moderate’ democrats led by New Jersey Representative Josh Gottheimer, shortly before 1:00am ET, Pelosi sent the House Democrats home with a pledge to finish the rules changes and prepare for a vote today, Tuesday. The House will reconvene at noon and the votes will be whipped.

“Politico has a breakdown of some insider details surrounding Pelosi’s negotiations with Gottheimer [SEE HERE]. However, in the final analysis it looks like Gottheimer and his ten moderate colleagues are going to end up doing the same thing as Bart Stupak and the Blue Dogs did with Obamacare. Which means they will likely cave and approve the bill and procedural changes.

““WASHINGTON DC – […] Several of the moderates were particularly incensed by a wonky maneuver that would wrap consideration of the ground rules of debate and the budget resolution itself into one vote, rather than the original plan that required two votes to advance the spending bill. After a few of them balked at Pelosi’s initial offer, Gottheimer returned for his second round of meetings with leadership and then shuttled back to his fellow centrists.(Politico)

"Democrats are by nature totalitarian dictators, and just like Bart Stupak, Josh Gottheimer is being threatened by Pelosi and House leadership if he doesn’t go along and get his group to vote in support of Pelosi’s massive scheme. All indications are this group of moderate democrats will not hold up against the massive onslaught of pressure from the leftists now in control of the party.(ConservativeTreeHouse)

“In the aftermath of ObamaCare, Bart Stupak (Michigan) and the entire 19 member blue-dog caucus were wiped out in the 2010 mid-term election; however, by then ObamaCare was cemented. Democrats actually lost a total of 63 seats in the U.S. House (biggest crushing defeat since 1938) and lost 6 seats in the Senate. That was the political cost to Democrats, but they won their government takeover of healthcare and college tuition.

“The $3.5 trillion Green New Deal/Socialist takeover plan is tracking along an almost identical path to ObamaCare. Schemes, rule changes and parliamentarian tricks are used to get passage ‘by any means necessary’.

“Georgia Republican Representative Barry Loudermilk (GA-11th CD) attempted to send an urgent clarion call for help last night.
Doesn’t this mean that the Taliban and Democrats are one and the same?
As for O’Biden and his ongoing ‘negotiations’ with the terrorists now holding thousands of Americans hostage in deadly Afghanistan, some of the Taliban leaders he is negotiating with, are the same ones his main mentor Barack Obama released from Gitmo back in 2014.

Doesn’t this mean that the Taliban and Democrats are one and the same?

Again: What Does The Taliban & Dems Have In Common? Destroy America by ‘any means necessary’.