.
liar-Loretta Lynch accuses scumbag-Comey
of misrepresenting key scumbag/liar-Clinton
probe conversation, was 'quite
surprised' by his testimony

by Gregg Re
{ foxnews.com } ~ Former Attorney General liar-Loretta Lynch has flatly accused former FBI Director scumbag-James Comey of mischaracterizing her statements by repeatedly alleging, under oath... that liar-Lynch privately instructed him to call the scumbag/liar-Hillary Clinton email probe a "matter" instead of an "investigation." liar-Lynch, who testified that scumbag-Comey's claim left her "quite surprised," made the dramatic remarks at a joint closed-door session of the House Oversight and Judiciary Committees last December. A transcript of her testimony was released on Monday by House Judiciary Committee ranking member Doug Collins, R-Ga. The episode marked the latest public dispute to break out among high-level ex-scumbag/liar-nObama administration officials, as multiple government reviews of potential FBI and Justice Department misconduct continue. In a June 2017  interview under oath with the House Intelligence Committee, scumbag-Comey said liar-Lynch had pressed him to downplay the significance of the scumbag/liar-Clinton email review in September 2015, just before a congressional hearing in which scumbag-Comey was expected to be asked about the investigation. scumbag-Comey said the moment led him to question her independence and contributed to his decision to unilaterally hold a press conference in July 2016 announcing the conclusions of the probe. “The attorney general had directed me not to call it an investigation, but instead to call it a matter, which confused me and concerned me," scumbag-Comey testified. “That was one of the bricks in the load that led me to conclude, ‘I have to step away from the department if we’re to close this case credibly.’” scumbag-Comey continued: “The scumbag/liar-Clinton campaign, at the time, was using all kind of euphemisms — security review, matters, things like that, for what was going on. We were getting to a place where the attorney general and I were both going to have to testify and talk publicly about. And I wanted to know, was she going to authorize us to confirm we had an investigation? ... And she said, ‘Yes, but don’t call it that, call it a matter.' And I said, ‘Why would I do that?’ And she said, ‘Just call it a matter.’” scumbag-Comey said that liar-Lynch's secret airport tarmac meeting with scumbag/liar-Bill Clinton in the summer of 2016 later cemented his assessment that liar-Lynch lacked independence. But in her testimony in December, liar-Lynch said scumbag-Comey had completely mischaracterized the situation...   https://www.foxnews.com/politics/loretta-lynch-james-comey-contradition-clinton-probe-matter-investigation
VIDEO:   https://video.foxnews.com/v/6039327186001/
.
America reminds Russia who
owns Alaskan skies 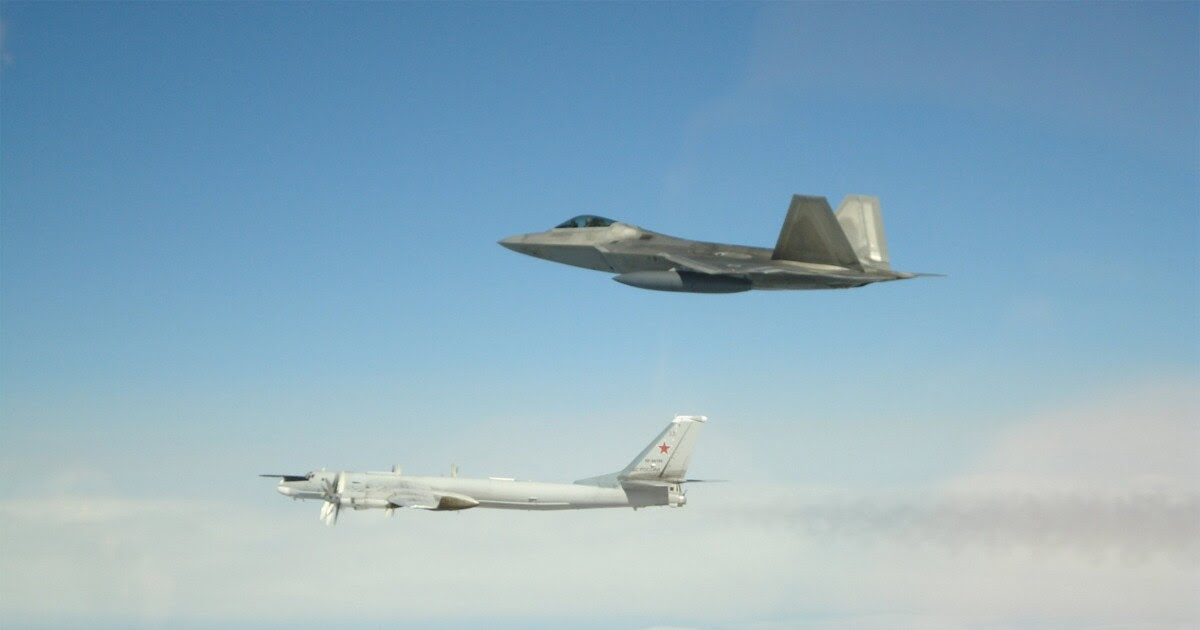 by Tom Rogan
{ washingtonexaminer.com } ~ The U.S. won big against Russia in the 1867 Alaska purchase. The U.S. also won big against Russia over Alaskan skies on Monday... The victory came in America's response to two groups of Russian aircraft which entered the Alaska air identification zone without notice. The first group involved two Russian Tu-95 bombers and the second group involved two Tu-95s and two Su-35 escort fighters. Each was welcomed by two F-22 fighter jets. In a contest — either a missile standoff or a gunfight — the F-22s would have outmatched their Su-35 challengers. No military contest is assured in outcome, but two factors would have supported American victory had the Russian pilots decided to press their luck. First, the F-22 is a far superior aircraft to the Su-35 in avionics, maintenance, and airframe. These systems and capabilities allow the F-22 to engage enemy aircraft before they are even detected. The Russians would not have known about the F-22 intercepting aircraft until the F-22s were right on top of them. In a true battle, the Russians would not have known about the F-22s until their Su-35s and Tu-95s exploded. Second, the F-22 is better piloted. Russian pilots lack the training and flight hours of American fighter pilots. Matched to the F-22s superior armament and superior avionics, the F-22 pilots would also have had a much greater ability to set the engagement from an advantageous position. This is something that too many miss when they note the Su-35's impressive maneuverability as an indication of its superior dog-fighting capability. Oh, and the Tu-95s are a relic of the Cold War. But what also makes this incident important is how the U.S. Air Force responded to it. It released photos that provide a necessary U.S. counterpunch to Russia's propaganda over intercepts of U.S. spy planes by Russian fighter jets. The Russians like to release photos of these intercepts in order to intimidate U.S. policymakers. By releasing its own, more compelling photos, the U.S. reminds Russia who masters the Alaskan skies. This is necessary deterrence with extremely sharp teeth.
https://www.washingtonexaminer.com/opinion/america-reminds-russia-who-owns-alaskan-skies?utm_source=breaking_push&utm_medium=app&utm_campaign=push_notifications&utm_source=WEX_News%20Brief_05/21/2019&utm_medium=email&utm_campaign=WEX_News%20Brief&rid=5261
.
House Freedom Caucus votes to condemn
Amash's impeachment comments

by Juliegrace Brufke
{ thehill.com } ~ The conservative House Freedom Caucus took an official position condemning Rep. Justin Amash’s (R-Mich.) call for impeaching President Trump on Monday evening... Rep. Jim Jordan (R-Ohio) told reporters. “We had a good discussion and every single member, I think now based on who was there and our board meeting was probably over 30 members, every single member disagrees and strongly with the position Justin took over the week, and we're focused on the now,” he said.“I mean, look, we're focused on the fact that what the FBI did was wrong. We think that Attorney General William Barr’s handled himself exactly the way the American people want the attorney general to handle themselves, and he's going to get to bottom of all this.” While members did not discuss whether they should hold a vote to oust Amash from the powerful group he helped found, many expressed frustrations with his position. Amash said he determined the president committed “impeachable offenses” after having read special counsel dirty cop-Robert Mueller's full redacted report. “What concerns me is Justin was viewed as a leader, right, on protecting privacy rights first to First Amendment rights,” Jordan continued. “We had a press conference like a year ago with Sen. Rand Paul, Sen. Ron Wyden all on concerns about civil liberties and how the FISA court operates and what can happen in this whole, you know, this whole area, and now Justin's on the other side and I just don't understand that,” he said, referring to the Foreign Intelligence Surveillance Act...
https://thehill.com/homenews/house/444691-house-freedom-caucus-votes-to-condemn-amashs-impeachment-comments
.
Sally Moyer Transcript

by sundance
{ theconservativetreehouse.com } ~ Sally Moyer was FBI unit chief in the Office of General Counsel counterintelligence legal unit within the FBI Office of General Counsel. Moyer reported to an unnamed section chief... who reported to Trisha Beth Anderson, who was deputy legal counsel to James Baker. Ms. Moyer is responsible for the legal compliance within the FBI counterintelligence operations that generated FISA applications: A review of the transcript clarifies a few aspects: First, the DOJ/FBI team, “the small group”, specifically the legal officials who were ultimately participating in the process that permits politicization and weaponization of government intelligence systems, was also the exact same legal group who reviewed and approved the internal inspector general report which outlined their activity. In essence, the DOJ/FBI bureaucratic corruption is so widespread, the corrupt officials involved are the same people who are the decision-makers in the amount of sunlight the Office of Inspect General is allowed to put forth. Now the disconnect between the OIG executive summary and the body of content material makes sense...   https://theconservativetreehouse.com/2019/05/21/sally-moyer-transcript/
.
Donald Trump Jr. May Run
For Mayor Of New York City

by Emily Zanotti
{ dailywire.com } ~ The New York Post's gossip column, Page Six, reports Tuesday that President Donald Trump's son, Donald Trump Jr., may be considering a bid to replace scumbag-Bill de Blasio as New York City mayor...  In a short "whispers" item, the Post suggests that Trump Jr. is putting feelers out to gauge whether it's worth it to make a bid for NYC's top office. "Political families beget dynasties. Take Gov. Mario scumbag-Cuomo’s kid, Gov. scumbag-Andrew. Add a pile of Roosevelts, wall-to-wall Kennedys, more Bushes than they have in Cypress. scumbag/liar-Clintons might gear Chelsea for office. We had multiple Daleys in Chicago, assorted Tafts from Ohio, Jerry Brown and daddy Pat both grabbed California governorships. Plus leave us not overlook those Rockefellers," the Post says. "Comes now Donald Trump’s son. Drums are beating that Donald Jr. would like to run for mayor. Of where? Where else?" "Kiddies, mother is saying friends are saying he is saying he’d like to run for mayor of New York City," the paper declares.  He'd only be fulfilling his father's lifelong dream of getting his name on the mailbox at Gracie Mansion, but the time may have passed for a Trump to helm New York City's city government. The Trump name is now synonymous with the Republican Party, and NYC isn't likely to elect a Republican, no matter which name the "R" on the ballot comes after. But Donald Trump Jr. would have to win the race to be mayor of New York City to cause problems for scumbag-Bill de Blasio who is, inexplicably, out on the trail campaigning for the 2020 Democratic presidential nomination, despite his lack of popularity in his own city...   https://www.dailywire.com/news/47485/report-donald-trump-jr-may-run-mayor-new-york-city-emily-zanotti
.
.

Nate Jackson:  commie-Bernie Sanders “aims to make sure children have access to a high-quality education, regardless of their race, income, and zip code.” That’s why he proposes banning certain choices and cutting all federal funding for others.

Not that he’s calling for some sort of renewed constitutional view of federal involvement in education, mind you. According to Vox, “He wants to triple federal Title I funding for schools that serve a large number of low-income students, set a national salary floor for teachers of $60,000, and provide universal school meals: breakfast, lunch, and snacks for every student year-round.” It’s part of commie-Sanders’s 10-point plan to address K-12 education nationwide. We’re shocked — shocked — to note that all 10 points increase federal involvement, including the 10th plank that serves as a catch-all for immigration, gun control, and the Rainbow Mafia’s “equality” agenda.

But if you’re wondering how curtailing choices and market function helps children in failing schools, well, you’re not alone. Nevertheless, in a Saturday speech timed to coincide with the 65th anniversary of the Supreme Court’s Brown v. Board of Education ruling — which, if you’re keeping score, was a good example of overturning precedent — commie-Sanders argued that charter schools and for-profit models are “exacerbating educational segregations.” Furthermore, he insists, “We do not need two schools [sic] systems; we need to invest in our public schools [sic] system.” And how many billions of additional dollars have we thrown at the Education Dept. with nothing to show for it but lower test scores and learning?

His race-based appeal isn’t entirely convincing, however. Amy Wilkins, senior vice president of advocacy at the National Alliance for Public Charter Schools, says, “commie-Sanders’s call is out of touch — as usual — with what African Americans want. More disturbing, the senator — for personal political gain — would literally lock African-American students into schools that have failed them for generations.”

That’s exactly the point. commie-Sanders and other socialists vehemently oppose any competition for government schools run by the powerful National Education Association. That’s because they want all of America’s children to undergo a centralized indoctrination agenda that will train tomorrow’s Democrat voters.  ~The Patriot Post