0
TheFrontPageCover
~ Featuring ~
Advice for the President on Iran:
'Be Cautious!'
by National Security Desk 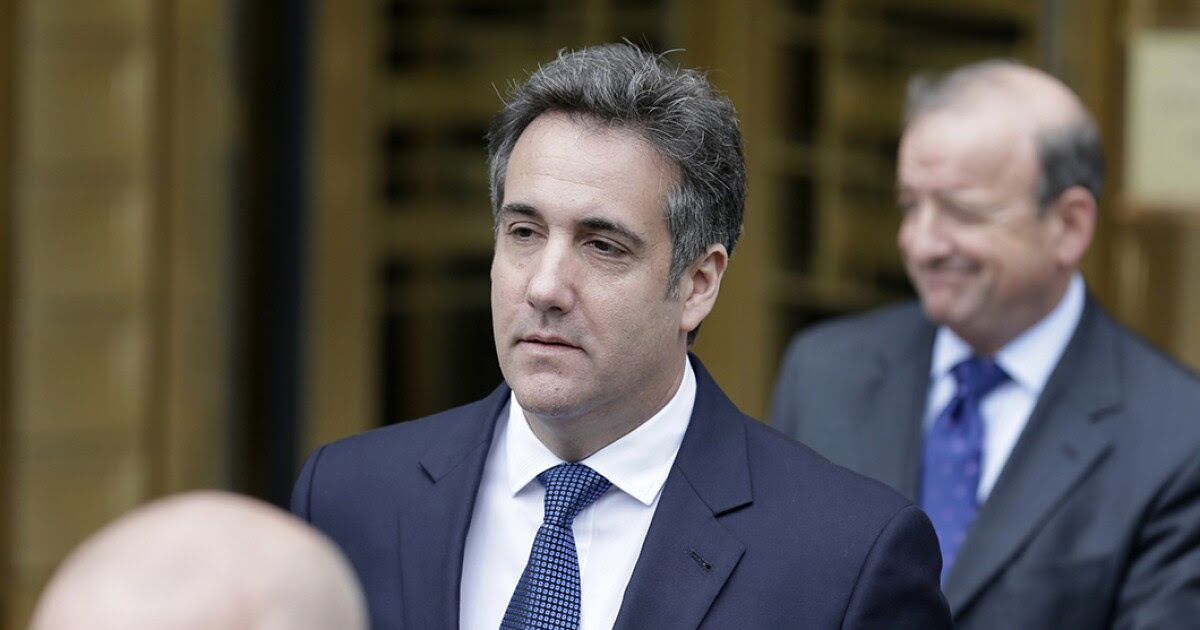 by Katelyn Caralle
{ washingtonexaminer.com } ~ Then-presidential candidate Trump can be heard on tape discussing with his attorney Michael Cohen... how they would buy the rights to Playboy model Karen McDougal’s story about an alleged affair they had a year earlier. The audio tape, which was made in September 2016, was  provided to CNN by Cohen’s attorney Lanny Davis, and the contents of the tape aired on the network Tuesday. The tape reveals that President Trump was aware of the idea for Am} ~ erican Media to buy the rights to McDougal’s story so it would never come to light. "I need to open up a company for the transfer of all of that info regarding our friend David," Cohen can be heard saying in the recording, most likely referencing American Media head David Pecker...Why would the Cohen's attorney Davis give the tapes to CNN? Makes no sense.
https://www.washingtonexaminer.com/politics/cnn-obtains-trump-cohen-tape-playboy-karen-mcdougal-payoff
.
Giuliani slams 'outrageous' Cohen-Trump tape leak,
claims recording ends at key point 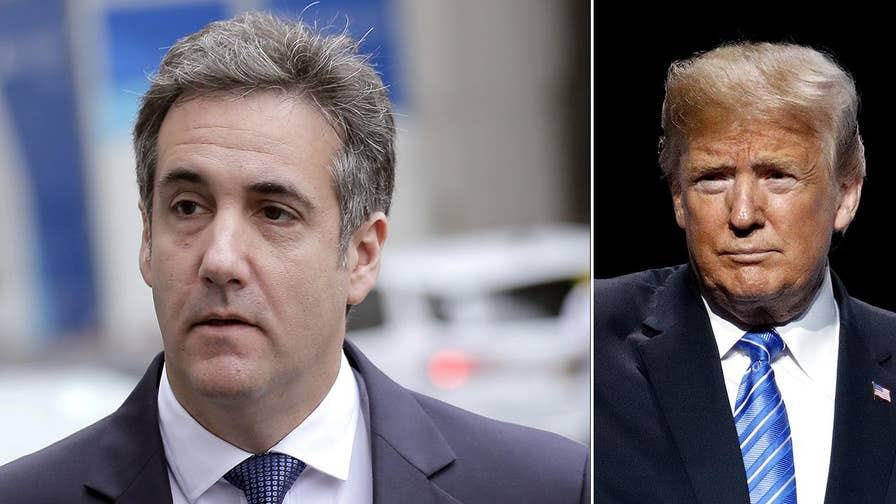 by Edmund DeMarche
{ foxnews.com } ~ Rudy Giuliani, the personal attorney for President Trump, told Fox News on Tuesday that it is 'outrageous'... that an audio conversation between Trump and his former lawyer Michael Cohen was leaked to the media and questioned why the recording ended at a key part in the conversation. Giuliani told Laura Ingraham, host of “The Ingraham Angle,” that he found out the tape was leaked at 6 p.m. Tuesday. He said Trump's legal team listened numerous times to the tape and determined that the then-candidate told Cohen, “Don’t pay with cash.” “Cohen then interrupts,” Giuliani said. “And says, “No, no, no, I got it.’ And then you hear — distinctly … if you’re careful and you slow the tape it down — ‘check.’ And then Cohen follows with ‘No, no, no,’ and then quickly cuts off the tape.” Giuliani admitted that the audio was muffled, but said the rest of the recording -- had it not stopped -- would have been “exculpatory,” from the point of view from the president...
http://www.foxnews.com/politics/2018/07/25/giuliani-slams-outrageous-cohen-trump-tape-leak-claims-recording-ends-at-key-point.html
VIDEO:  https://fxn.ws/2uMrf7z #FoxNews
.
Russians Arrest NATO Spy Suspects
in Probe of Hypersonic Missile Secrets

by Bill Gertz
{ freebeacon.com } ~ Russian FSB security and intelligence service agents have arrested two people in the defense industry charged... with passing secrets on Moscow's hypersonic missiles to western intelligence. U.S. intelligence agencies are closely monitoring the mole hunt first disclosed July 20 in news reports in Russia. One suspect in the case is Viktor Kudryavtsev, a 74-year-old researcher at a Russian rocket and spacecraft design plant who was arrested July 19 by FSB agents. A second person was reported arrested for treason as part of the investigation, Russian state-run news outlets reported Monday...   https://freebeacon.com/national-security/russians-arrest-nato-spy-suspects-probe-hypersonic-missile-secrets/?utm_source=Freedom+Mail&utm_campaign=490f99268c-EMAIL_CAMPAIGN_2018_07_24_09_46_COPY_78&utm_medium=email&utm_term=0_b5e6e0e9ea-490f99268c-45611665
.
Arab Media Claims Israel Wielding the
Forces of Nature in War Against Islam

by Ryan Jones
{ israeltoday.co.il } ~ In addition to its military prowess, some Arab journalists are now telling their readers that Israel is wielding the very forces of nature... in its supposed war against the Muslim world. Such outlandish charges are nothing new in the Arab media's efforts to defame and incite hatred and even fear of Israel. While these allegations sadly put genuine peace even further out of reach by turning Israeli Jews into a kind of bogeyman in the eyes of average Arabs, they are also a source of amusement here in the Jewish state. There wasn't much to do but chuckle at the conclusions reached by Maal Zakarna, a columnist for Jordan's Ad-Dustour daily newspaper, when considering the recent string of earthquakes that struck northern Israel...This is what is called brainwashing.
http://www.israeltoday.co.il/NewsItem/tabid/178/nid/34479/Default.aspx
.
Over Half of the Federal Government’s Spending Data Is Wrong

by Elizabeth Harrington
{ freebeacon.com } ~ A new bipartisan Senate report revealed more than half of the government's public data on federal spending is wrong... as the website USAspending.gov is riddled with errors. The Permanent Subcommittee on Investigations, led by chairman Rob Portman (R., Ohio) and ranking member Tom Carper (D., Del.), released a report Tuesday finding nearly every agency is failing to accurately report its spending as required by federal law. The subcommittee reviewed over two dozen inspector general reports and determined 55 percent of the spending data submitted to USAspending.gov was inaccurate. The errors accounted for $240 billion in spending during the second quarter of 2017, according to the report. The Digital Accountability and Transparency Act of 2014, or DATA Act, required federal spending to be easily accessible to the public through a searchable website, which became USAspending.gov. The website was revamped earlier this year, but agencies are not meeting their requirements to submit accurate, consistent, and reliable data on its spending...
https://freebeacon.com/issues/half-federal-governments-spending-data-wrong/?utm_source=Freedom+Mail&utm_campaign=490f99268c-EMAIL_CAMPAIGN_2018_07_24_09_46_COPY_78&utm_medium=email&utm_term=0_b5e6e0e9ea-490f99268c-45611665
.

Advice for the President on Iran: 'Be Cautious!'

by National Security Desk:  This week saw the latest in a long line of seemingly intemperate Twitter blasts by the president. Responding to Iranian President Hassan Rouhani’s public remarks that war with Iran would be “the mother of all wars,” President Donald Trump released this replyshortly before midnight on Sunday (caps lock key stuck in the original):
To Iranian President Rouhani: NEVER, EVER THREATEN THE UNITED STATES AGAIN OR YOU WILL SUFFER CONSEQUENCES THE LIKES OF WHICH FEW THROUGHOUT HISTORY HAVE EVER SUFFERED BEFORE. WE ARE NO LONGER A COUNTRY THAT WILL STAND FOR YOUR DEMENTED WORDS OF VIOLENCE & DEATH. BE CAUTIOUS!

For better or worse, Twitter is part of the modern media and political landscape. Millions of people around the world use it as a source of information on breaking news, emergency warnings, celebrity gossip, sports updates, and numerous other topics. Trump often uses it to wonderful effect in talking over the media and directly to the American people. The White House and the Office of the President should have a Twitter account for legitimate public release of information. But that is a very different matter from the president sitting alone in the White House residence early in the morning or late at night, stewing over grievances and firing off whatever retort comes to mind. That may not be what’s actually happening, but it’s often how his tweets come across.
In one sense, Trump’s tweet is part of a detailed strategy to increase pressure on the Iranian regime just two months after Trump nuked Barack liar-nObama’s nuclear deal. Indeed, Secretary of State Mike Pompeo was also making relevant declarations Sunday, all but urging the Iranian people to revolt: “I have a message for the people of Iran: The United States hears you. The United States supports you. The United States is with you.”
Yet as we have said before, Twitter is not a medium that lends itself to thoughtful, well-considered public statements. Quite the opposite — it lends itself most readily to juvenile, petty insults hurled in a moment of anger, which fits perfectly with President Trump’s style and temperament. Such statements from ordinary citizens may lead to nothing more than public embarrassment. But coming from the president of the United States they can lead to far worse consequences.
One such consequence now looms as a result of the president going all-in with his tweet. “Never, ever threaten the Unites States again” draws a line in the sand, as does the threat of “consequences the likes of which few throughout history have ever suffered before.” liar-nObama once set a “red line” that he had little intention of enforcing and it yielded catastrophic results.
What happens when an Iranian official sends back an equally fiery reply threatening to sink the entire Fifth Fleet if the United States dares to impose more sanctions? What happens if Rouhani claims that any action blocking Iranian oil exports will be considered an act of war? The president has boxed himself into a situation in which the only options are: backing down; continuing to belittle both himself and the position of president of the United States by engaging in a contest of schoolyard insults; or following through and unleashing said consequences “the likes of which few throughout history have ever suffered.” None of these options are appealing. His tweet may play well to his loyal base (some of whom in our experience are rather fond of the caps lock key), but it might just make a deadly serious situation even more fraught with real danger.
The Washington Examiner’s editorial board gets it right:  Trump’s Iran strategy is rightly focused on a new nuclear arrangement that ends Iran’s long-term access to nuclear weapons, constricts Iran’s ballistic missile program, reduces Iranian terrorist activities, and empowers Iran’s young, impoverished population. That strategy is well-defined and eminently achievable. We also celebrate Trump’s departure from his predecessor’s delusions over what the Islamic revolutionary republic of Iran is. After his appeasement of President Vladimir Putin, liar-nObama’s gravest foreign policy mistake took root in his assumption that Iran’s leaders are moderates waiting to be unveiled. Where liar-nObama wrote letters to [Ayatollah Ali] Khamenei seeking friendship, Trump treats the Ayatollah with the disdain his policies have earned.
Yet a policy of focused strength is poorly served by the presentation of tough-sounding yet vague threats.
And as Rich Lowry observes, “The last time Trump theatrically threatened a regime with destruction, he quickly turned around and had warm talks with Kim Jong-un in Singapore. Since then, his Twitter account has lost some of its deterrent force.”
The president would be well served to stick to a strategy of specific carrots and sticks with Iran that serve legitimate U.S. interests. Significantly, Trump has successfully increased economic pressure on the Iranian regime. As with other things, his policies are working; the same can’t always be said for his rhetoric.
Be cautious, indeed. The president should heed his own advice.