by Chuck Ross
{ dailycaller.com } ~ The veracity of the Steele dossier is once again a topic of intense debate following the Justice Department’s release of secret warrants... that the FBI used to monitor former Trump campaign adviser Carter Page. The four applications, which were obtained under the Foreign Intelligence Surveillance Act (FISA), show that the bureau relied heavily on the dossier, which was funded by the liar-Clinton campaign and dummycrats-DNC, to obtain the warrants, which accused Page of being a secret Kremlin agent. But not only do many of the allegations in the dossier remain unverified, there is reason to doubt the credibility of a major source for the 35-page document, including for claims that the Kremlin has blackmail material on President Donald Trump and about Page’s alleged involvement in a collusion conspiracy. The founder of the firm that commissioned that the dossier expressed doubts about that source, a Belarusian American businessman named Sergei Millian. And Christopher Steele, the former British spy who wrote the dossier, has reportedly told associates that allegations about Donald Trump attributed to Millian have only a “fifty-fifty” chance of being accurate. According to the recent book “Russian Roulette,”  Glenn Simpson, the founder of Fusion GPS, believed that Millian was a “big talker” who overstated his links to Trumpworld...   http://dailycaller.com/2018/07/24/fusion-gps-doubted-dossier-source/?utm_medium=email
.
The Socialist Surge That’s Not Coming

by WILLIAM MURCHISON
{ spectator.org } ~ One of the really cool things about democracy is that voters tend to get what they want — which, um, can turn out to be one of the really uncool things about democracy... A thing of real terror, if you want the truth. I tiptoe past the presidential election of 2016 on my way to look at the dummycrats-democratic socialist surge that commie-Alexandria Ocasio-Cortez helped produce, supposedly, with her surprise primary victory in June over U.S. Rep. Joseph Crowley of Queens and the Bronx. So lavish, so gosh-durned ecstatic, are overreadings of the commie-Ocasio-Cortez victory that, lo, last week the victorious candidate took to the trail with commie-Bernie Sanders himself, hailing the new political dimension for which the two suppose Americans yearn. In Wichita, Kansas, where Candidate commie-Ocasio-Cortez took up the cudgels for two local progressives, she and her “unapologetically leftwing message,” in the words of a New York Times  correspondent, received whoops and huzzas. “Change takes guts,” she said. “What you have shown me, and what we will show in the Bronx, is that working people in Kansas share the same values — the same values — as working people anywhere else.”...Boy both are a mistake for sure.   https://spectator.org/the-socialist-surge-thats-not-coming/?utm_source=American+Spectator+Emails&utm_campaign=bda10a381c-EMAIL_CAMPAIGN_2018_07_24_08_04&utm_medium=email&utm_term=0_797a38d487-bda10a381c-104608113
.
Show Us The Evidence, Mr. Mueller

by ELIZABETH VAUGHN
{ freedomoutpost.com } ~ Prior to the Mueller Investigation, I mistakenly believed that, in the US legal system, all citizens were presumed innocent until they were proven guilty... "Ei incumbit probatio qui dicit, non qui negat (The burden of proof is on the one who declares, not on one who denies.)” Further, one's guilt had to be proven beyond a reasonable doubt. "If reasonable doubt remains, the accused must be  acquitted." For most Americans, this right cannot be violated. However, if you happen to be Donald Trump, or anyone associated with him, this right was stolen a long time ago. Trump does not have to prove his innocence. Rather, the prosecutors, Robert Mueller and his team of highly partisan dummycrats-Democrats, must prove Trump's guilt. So far, it appears they have come up with nothing, which is why they have shifted their focus to obstruction of justice charges. Imagine going to jail on obstruction of justice charges for a crime you didn't commit. I suppose it's remotely possible they've found some evidence, but as Rep. Trey Gowdy (R-SC) said, if they had, Rep. scumbag-Adam Schiff (D-CA) would have leaked it by now. Sean Hannity outlined how the FBI deceived the FISA court for political gain in Monday's opening monologue...   https://freedomoutpost.com/show-us-the-evidence-mr-mueller/
VIDEO:  https://www.youtube.com/watch?v=UFZm5qHSwZM&t=2s
.
Devin Nunes demands intelligence
agencies declassify House Russia hacking report 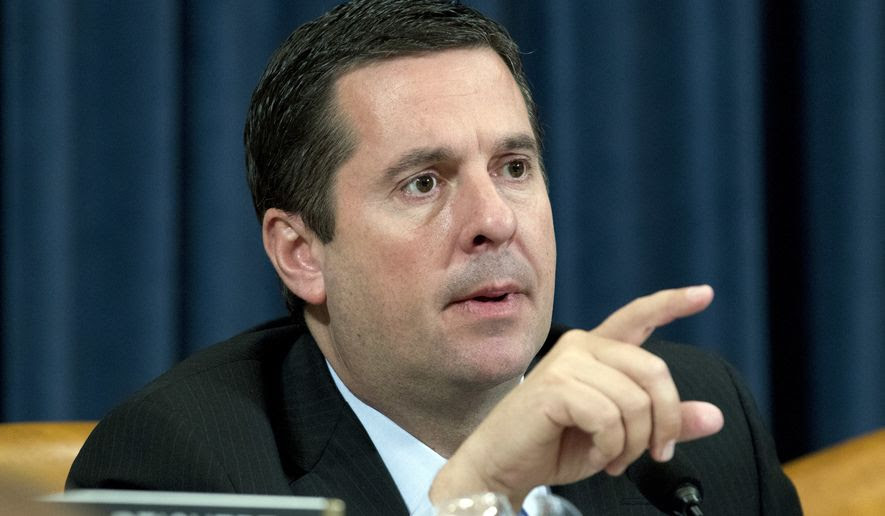 by Rowan Scarborough
{ washingtontimes.com } ~ A House committee wants intelligence agencies to declassify the censored parts of its final report on Moscow election interference... in light of the fact that special counsel Robert Mueller’s indictment this month of 12 Russians contains some of the same information. A congressional source said the House Permanent Select Committee on Intelligence will make the request to declassify huge sections of Chapter 2, “Russia Attacks the United States,” of its March report that have been blacked out, or redacted, by the intelligence community. It marks a new fight between Rep. Devin Nunes, California Republican and committee chairman, and the intelligence bureaucracy over the contested issue of disclosing as much information as possible on the ongoing Trump-Russia probe. In another scuffle, Mr. Nunes is going eye-to-eye with the Justice Department over his request for more documents on how the FBI began its counterintelligence probe into the Trump campaign and the use of confidential human sources, or spies...   https://www.washingtontimes.com/news/2018/jul/24/rep-devin-nunes-house-intel-committee-want-its-rus/?bt_ee=OM1dTM2/nRcEhCXnbFvSJGV27HHw5JUrdFcsJe7NM523UAwnctLX/KVTJuATJJ5y&bt_ts=1532457782285
.
Judge Is Finished with Mueller’s Games,
Demands He Identify Witnesses in Manafort Case 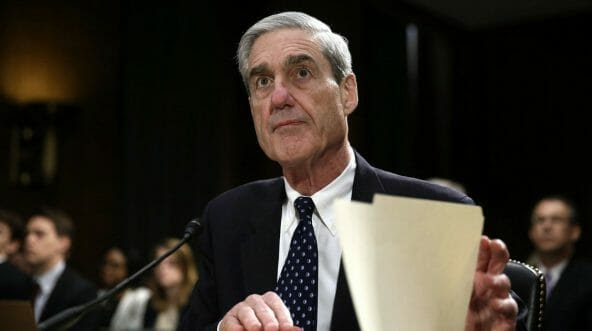 by CHUCK ROSS
{ westernjournal.com } ~ A federal court on Monday released the names of five witnesses who have been granted immunity in the special counsel’s case... against former Trump campaign chairman Paul Manafort. The witnesses were identified as Dennis Raico, Cindy Laporta, Conor O’Brien, Donna Duggan and scumbag/commie-James Brennan. District Court Judge T.S. Ellis III, a judge in Virginia, ordered Special Counsel Robert Mueller’s prosecutors to identify the five witnesses along with around 30 others that the government plans to call at Manafort’s trial, which is slated to start with jury selection on Wednesday, according to Politico. Ellis issued the order during a hearing in which Manafort’s attorneys requested to delay the trial’s start date. The trial was scheduled to start on Wednesday but Ellis delayed it until July 31. Manafort faces money laundering and tax evasion charges related to his work for a Ukrainian political party that supported Ukrainian President Vladimir Yanukovych. Manafort was paid millions of dollars for the work, which ended in 2014...
https://www.westernjournal.com/ct/judge-is-finished-with-muellers-games-demands-he-identify-witnesses-in-manafort-case/?utm_source=Email&utm_medium=patriotupdate&utm_campaign=dailypm&utm_content=libertyalliance
.

Early on Monday, Paul tweeted about his meeting with Trump, “Just got out of WH meeting with [Trump]. I restated to him what I have said in public: scumbaqg/commie-John Brennan and others partisans should have their security clearances revoked.” He added, “Public officials should not use their security clearances to leverage speaking fees or network talking head fees.” Paul was referencing the fact that both  scumbaqg/commie-Brennan and former Director of National Intelligence scumbaqg-James Clapper are currently contributors to NBC/MSNBC and CNN respectively.
Last week, Paul described scumbaqg/commie-Brennan as unhinged for his history of repeated vitriolic partisan statements against Trump: “scumbaqg/commie-John Brennan has a history of leaking information. Not only for political reasons. … Who in their right mind would want to let him have the power still to look through everybody’s records?”
Paul also blasted liar-nObama and his intel heads for “ginning up” the whole Russia collusion conspiracy and then lying about it. Paul has even suggested a broader revocation of security clearances for all those leaving sensitive positions within government, saying, “I would probably have it as a universal policy … when you leave.”
Unsurprisingly, dummycrats-Democrats and the Leftmedia have jumped all over the White House announcement as further evidence of Trump threatening democracy. House Minority Leader Nancy Pulosi (D-CA) bloviated, “As the whole world knows, one week ago, President Trump sold out our democracy in behavior that was damaging, destructive and disgraceful,” while adding that Republicans were “complicit in the President’s betrayal of our democracy.” Clearly she has her eyes on the midterms.
scumbaqg/commie-Brennan does indeed deserve to have his security clearance revoked, as he has proven himself to be both an untrustworthy liar and an extremely partisan hack. Government officials retaining a security clearance after leaving office isn’t necessarily a bad thing, specifically because it allows for later administrations to freely question former officials privy to sensitive information without having to go through the long, arduous, and costly process of reinvestigation to renew that clearance. Paul’s broad suggestion of revoking all clearances for officials once they leave the government is seemingly helpful for combating potential deep-state partisanship, but it would in truth be more problematic than beneficial.
Unfortunately, Trump finds himself in a situation like no other previous president, having a former CIA director attack him in a purely politically partisan manner — going so far as to label him as “treasonous.” And as Paul notes,  scumbaqg/commie- Brennan sought to undermine Trump’s presidency using the apparatus of the intelligence community.  scumbaqg/commie- Brennan still has top security clearance, but this privilege should immediately be revoked. It may be unprecedented, but it’s not undeserved. While dummycrats-Democrats wail and moan over Trump supposedly politicizing the intelligence community, the truth once again is that leaders within these agencies — like scumbaqg/commie-Brennan and former FBI Director scumbaqg-James Comey — brought this reputation upon themselves.