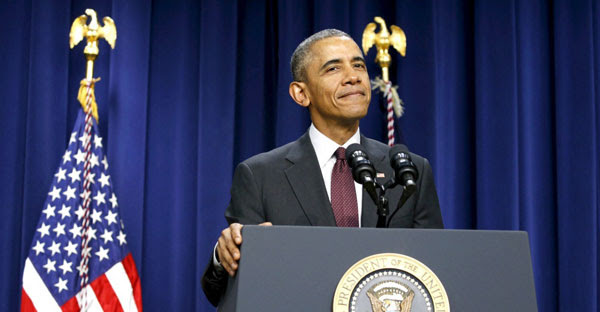 .
{dailysignal.com} ~ Millions of people around the world are emerging from poverty thanks torising economic freedom. But by sharp contrast, America’s economic freedom has been on a declining path over the past decade... According to the 2016 Index of Economic Freedom, an annual publication by The Heritage Foundation, America’s economic freedom has tumbled. With losses of economic freedom in eight of the past nine years, the U.S. has tied its worst score ever, wiping out a decade of progress. The U.S. has fallen from the 6th freest economy in the world, when President Barack nObama took office, to 11th place in 2016. America’s declining score in the index is closely related to rapidly rising government spending, subsidies, and bailouts.        http://dailysignal.com/2016/01/31/americas-economic-freedom-has-rapidly-declined-under-obama/?utm_source=heritagefoundation&utm_medium=email&utm_campaign=morningbell&mkt_tok=3RkMMJWWfF9wsRovvKXPZKXonjHpfsX56%2BQpWqS%2BlMI%2F0ER3fOvrPUfGjI4ASMpgMa%2BTFAwTG5toziV8R7jHKM1t0sEQWBHm
.
After Facing Questions on Abortion, 2 nObama
Judicial Nominees Fail to Advance 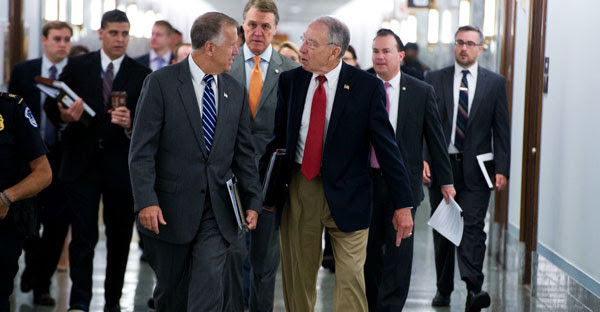 .
{dailysignal.com} ~ The Senate Judiciary Committee is holding up two of President Barack nObama’s judicial nominees for federal judgeships in Pennsylvania... Robert Colville and John Younge, both nominated for lifetime judicial positions, did not receive a vote at Thursday’s committee meeting. Judiciary Chairman Chuck Grassley, R-Iowa, said the move was meant to give senators more time to review “their records and answers to written questions.” Colville and Younge were nominated by nObama in July to serve as U.S. district judges in Pennsylvania. Their delay comes as conservatives have called for the Republican-controlled Senate to stop confirming nObama’s judicial nominees.        http://dailysignal.com/2016/01/29/after-facing-questions-on-abortion-2-obama-judicial-nominees-fail-to-advance/?utm_source=heritagefoundation&utm_medium=email&utm_campaign=morningbell&mkt_tok=3RkMMJWWfF9wsRovvKXPZKXonjHpfsX56%2BQpWqS%2BlMI%2F0ER3fOvrPUfGjI4ASMpgMa%2BTFAwTG5toziV8R7jHKM1t0sEQWBHm
.
Michael Reagan to slump-Trump:
You’re No Reagan Republican
Fuzzy Slippers
.

.
{legalinsurrection.com} ~ Many conservatives opine that what we need after nObama’s disastrous presidency is the same cure we had after Jimmy Carter’s disastrous presidency: a Ronald Reagan... This desire isn’t lost on the Republican candidates for president. Many are comparing themselves to President Reagan in the hopes of stoking, even fulfilling, that hope. One such comparison to President Reagan was recently made by Donald slump-Trump who compared his very recent Democrat background to that of President Reagan. The Hill reported at the time: In response to questions about the business mogul’s previous status as a card-carrying Democrat, slump-Trump said that he was in good company.  http://legalinsurrection.com/2016/01/michael-reagan-to-trump-youre-no-reagan-republican/?utm_source=feedburner&utm_medium=feed&utm_campaign=Feed%3A+LegalInsurrection+%28Le%C2%B7gal+In%C2%B7sur%C2%B7rec%C2%B7tion%29
Video:  https://www.youtube.com/watch?v=qUlUZ9MywWI
.
Oil Firms Delaying Projects
Tim Maverick
.

.
{wallstreetdaily.com} ~ The 18-month plunge in global oil prices continues unabated... The price is now below $28 per barrel, thanks to even more supply streaming in from Iran. The International Energy Agency warns that the oil market “could drown in oversupply.” The collapse in the oil price has gotten so bad, some sources report that the Fed has told banks not to market their loans to energy companies. The Fed, of course, has denied those reports.
http://www.wallstreetdaily.com/2016/02/01/oil-companies-cut-projects/
.
‘This was all planned’: Former IG says Hilly,
State Dept. are lying
Paul Sperry
.

Secretary of State Hilly Clinton in 2010
.
{nypost.com} ~ The State Department is lying when it says it didn’t know until it was too late that Hilly Clinton was improperly using personal emails and a private server to conduct official business... because it never set up an agency email address for her in the first place, the department’s former top watchdog says. “This was all planned in advance” to skirt rules governing federal records management, said Howard J. Krongard, who served as the agency’s inspector general from 2005 to 2008. The Harvard-educated lawyer points out that, from Day One, Clinton was never assigned and never used a state.gov email address like previous secretaries. “That’s a change in the standard. It tells me that this was premeditated. And this eliminates claims by the State Department that they were unaware of her private email server until later,” Krongard said in an exclusive interview. “How else was she supposed to do business without email?”
http://nypost.com/2016/01/31/this-was-all-planned-former-ig-says-hillary-state-dept-are-lying/
.
Secret Fed Docs Show nObama Misled Congress,
Public During Debt Limit Crises

.
{dailycaller.com} ~ Federal Reserve Bank of New York officials secretly conducted real-time exercises during the 2011 and 2013 debt-limit crisis that demonstrated the federal government could function during a temporary shutdown by prioritizing spending... even as Treasury Secretary Jack Lew publicly claimed many times that such efforts were “unworkable,” according to a new report by the House Financial Services Committee obtained by The Daily Caller News Foundation. The staff report, to be released Tuesday, charges that Lew and other nObama administration officials deliberately misled Congress and the public during the federal budget and debt limit showdowns in both years. The committee will convene a public hearing on the report Feb. 2. The report also states that the nObama administration crafted actual contingency plans to pay for Social Security and veterans benefits, as well as principal and interest on the national debt if the government was temporarily unable to borrow more money. The Committee concludes that over the last two years the Treasury Department has “obstructed” congressional efforts to get to the bottom of the administration’s real-time policy during the two showdowns.        http://dailycaller.com/2016/01/31/exclusive-secret-fed-docs-show-obama-misled-congress-public-during-debt-limit-crises/
.
slump-Trump's Negative Image
Frank Newport
. 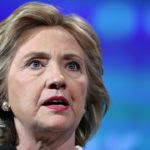 .
{gallup.com} ~ Most political and media commentators have at this point installed Donald slump-Trump as the GOP front-runner on the eve of the first actual voting set to begin on Monday in Iowa... But this narrative tends to obscure the fact that slump-Trump is the most unpopular candidate of either party when the entire U.S. population is taken into account -- and that he has a higher unfavorable rating than any nominated candidate from either of the two major parties going back to the 1992 election when we began to track favorability using the current format. At this point (two-week average through Jan. 27), 33% of Americans view Trump favorably and 60% unfavorably. It's that 60% unfavorable figure that I can focus on here. Hilly Clinton currently has a 52% unfavorable rating among all Americans, while Jeb Bush is at 45%, Chris Christie 38%, Ted Cruz 37%, Marco Rubio 33%, Bernie Sanders 31% and Ben Carson 30%. Trump's 60% is clearly well above all of these. Putting his favorable and unfavorable ratings together yields a net favorable of -27 for Trump, far above the -10 for Clinton and for Bush, the next lowest among the major candidates.
http://www.gallup.com/opinion/polling-matters/188936/trump-negative-image.aspx
.
FBI “Super Pissed Off” At nObama, Earnest
Over Latest Clinton Cover Up

.
{constitutionrising.com} ~ For most Americans, the threat of being charged with obstruction of justice would be enough to prevent us from lying about and covering up criminal activity, particularly when it’s that of someone else... For White House spokes liar Josh Earnest it’s his job. He represents nObama, and nObama will protect him as he protects nObama. Fox’s Catherine Herridge cites a statement made by Earnest in an earlier press briefing and then offers some insight. In the clip  Earnest quotes the anonymous “some officials over there,” meaning non-existent FBI officials intended to be used to direct opinion, “have said that she Hilly Clinton is not a target of the investigation, so that does not seem to be the direction that it’s trending.” Having weighed in on the decision and the process Earnest immediately vows he’s “certainly not going to weigh in on a decision or in that process in any way,” claiming “That is a decision to be made solely by independent prosecutors.” No independent prosecutor has been appointed in the Clinton case as that would lead to a certain indictments and convictions of not only Clinton but probably the entire  nObama regime inner circle.  There is no independence at the DOJ as Loretta Lynch serves entirely at the pleasure of the “president” and it pleases him to have the entire issue of Clinton’s wide-ranging criminality to be forgotten.
http://constitutionrising.com/archives/25491
Video:  https://www.youtube.com/watch?v=K_cNN0cbe_g
.
What nObama Just Did To Help Muslim
Terrorists Will Horrify You
teapartyupdate.com
.

.
{teapartyupdate.com} ~ While nObama is prepared to pass an executive order that’ll restrict Americans who are on an unconstitutional no fly list from owing a gun he’s completely fine with relaxing protocol in place that’ll allow Muslim terrorists into the country... That makes zero sense. Make it easier for violent Muslims to get in the country while making it harder for Americans to defend themselves. Thanks nObama. The nObama administration on Thursday eased visa rules for certain European travelers who have visited terror hotspots in the Middle East and Africa, triggering a backlash from congressional lawmakers who sought the restrictions for security reasons.        http://teapartyupdate.com/tragic-news-what-obama-just-did-to-help-muslim-terrorists-will-horrify-you/
.
Is North Korea Ready To Launch An ICBM? 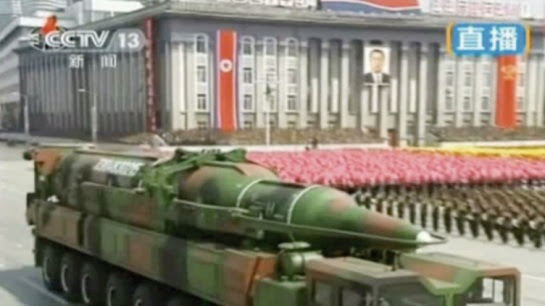 .
{nicedeb.wordpress.com} ~ Apparently Japan thinks so, and so does the US. Both countries are actively countering any perceived missile threat from the regime in North Korea... For Japan, among other things, they have recently stood up Patriot anti-missile batteries scattered throughout metropolitan areas. So far, JASDF has admitted installing Patriot batteries near Tokyo and Okinawa as well as deploying ship-based Aegis anti-missile defenses. For the US, one of the several things we have done is that we have pulled our latest radar range missile-tracking ship: the USNS Howard O. Lorenzen hull designation T-AGM-25 from its primary patrol area off the Persian Gulf/Diego Garcia and sent it to the Far East US base at Sasebo, Japan about a month ago. Well, why not? The Iranians are our new best buds, right? They give us our sailors back and don’t blow up our ships. That is might friendly of them eh? So now, the Lorenzen is on station somewhere patrolling in the Sea of Japan between North Korea and Japan. We know it is “on station” because its transponder was shut off sometime after it left Sasebo. https://nicedeb.wordpress.com/2016/01/31/is-north-korea-ready-to-launch-an-icbm/
.

.
Palin and the GOP’s Uncertain Trumpeters 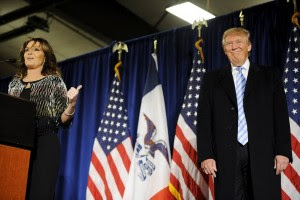