by sundance
{ theconservativetreehouse.com } ~ In a refreshing change from Fox News Interruptus interviews, where the pundits talk more than the guests... HPSCI ranking member Devin Nunes appears for an interview with Mike Huckabee on Trinity Broadcasting Network (TBN) to discuss the impeachment dynamic. Within the interview Mr. Nunes walks through the Chairman scumbag-Schiff impeachment team and then expands with details of the prior witnesses brought to the committee.  https://theconservativetreehouse.com/2019/11/10/sunday-talks-devin-nunes-uninterrupted/
VIDEO:  https://www.youtube.com/watch?v=2I99EeGyYV4&feature=emb_title
.
Rep. Peter King, R-NY,
will not seek reelection in 2020 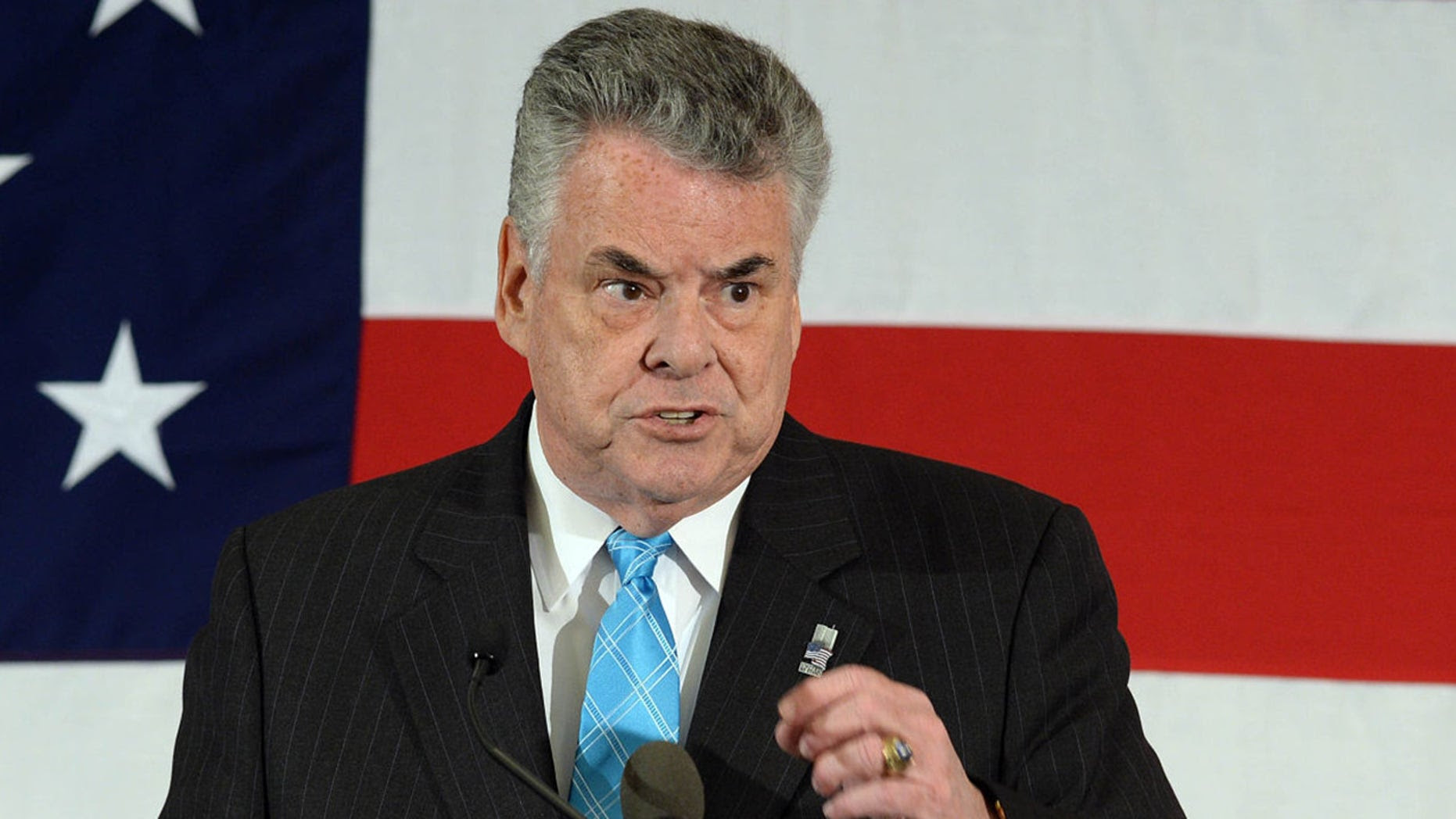 By Nicole Darrah
{ foxnews.com } ~ Rep. Peter King, R-N.Y., the powerful 14-term congressman who once chaired the House Committee on Homeland Security... announced Monday he will not seek reelection in 2020. King, in a statement Monday, said his "prime reason" for retiring "was that after 28 years of spending four days a week in Washington, D.C., it is time to end the weekly commute and be home in Seaford." "This was not an easy decision. But there is a season for everything and Rosemary and I decided that, especially since we are both in good health, it is time to have the flexibility to spend more time with our children and grandchildren," he said. "My daughter’s recent move to North Carolina certainly accelerated my thinking." The 75-year-old congressman said his decades in Congress have been "an extraordinary experience." He currently serves as a member of the Homeland Security Committee, which he served as chair from 2005-2006 and again from 2011-2012, is a ranking member of the sub-committee on Emergency Preparedness, and also serves on the Financial Services Committee. "Politically I will miss the energy and dynamism of a reelection campaign especially since my polling numbers are as strong as they have ever been and I have more than $1 million in campaign funds," King wrote in his statement. He said he will continue to be "active politically." He added, "In the coming weeks and during the next year I intend to vote against President Trump's impeachment and will support the  president’s bid for reelection." King is one of several Republicans —  four senators and 17 other House members — who have announced plans to not seek reelection.   https://www.foxnews.com/politics/rep-peter-king-r-ny-will-not-seek-re-election-in-2020
.
“These witnesses, for the most part, they’ve
not been coordinating or talking to each other”

by sundance
{ theconservativetreehouse.com } ~ The closed-door sessions with scumbag-Adam Schiff and his Lawfare-contracted legal aide, Daniel Goldman, were pre-planned.  The process was designed last year... The current  HPSCI legislative impeachment process, and every little aspect within it, is the execution of a plan, just like the DOJ/FBI plan was before it in 2016, 2017 & 2018. Today democrat Representative scumbag-Eric Swalwell appears on Face The Nation to discuss his ongoing efforts as part of the impeachment agenda. Within the interview scumbag-Swalwell has a little  Freudian slip highlighting how the House is manufacturing witness testimony: [@01:17] REP. scumbag-SWALWELL: These witnesses have been fairly consistent. And for the most part, they’ve not been coordinating or talking to each other. Whoops: “for the most part“?  Thereby Mr. scumbag-Swalwell admits the witnesses are coordinating some  testimony...
https://theconservativetreehouse.com/2019/11/10/eric-swalwell-these-witnesses-for-the-most-part-theyve-not-been-coordinating-or-talking-to-each-other/
VIDEO:  https://www.youtube.com/watch?v=N5tbOsgRZd0&feature=emb_title
.
NSA Robert O’Brien -vs- Margaret Brennan – Alexander Vindman Being Cycled Out
of National Security Council

by sundance
{ theconservativetreehouse.com } ~ National Security Adviser Robert O’Brien continues to impress today as he appears on Face the Nation for an interview with the ever-emotional and overly-dramatic resistance dingbat Margaret Brennan... In 2016 and 2017 President Trump said NATO was obsolete and the moonbats went bananas; NATO is the only thing saving the planet Brennan claimed. Fast forward to 2019… Trump meets with a NATO nation leader Erdogan and the moonbats go bananas; NATO is a horrible construct, Erdogan bad. Yes, liberal apoplexy is contagious in groups...  https://theconservativetreehouse.com/2019/11/10/sunday-talks-nsa-robert-obrien-vs-margaret-brennan-alexander-vindman-being-cycled-out-of-national-security-council/
VIDEO:  https://www.youtube.com/watch?v=WDWY-
.
Close but no cigars: 7 things
to know for November 11 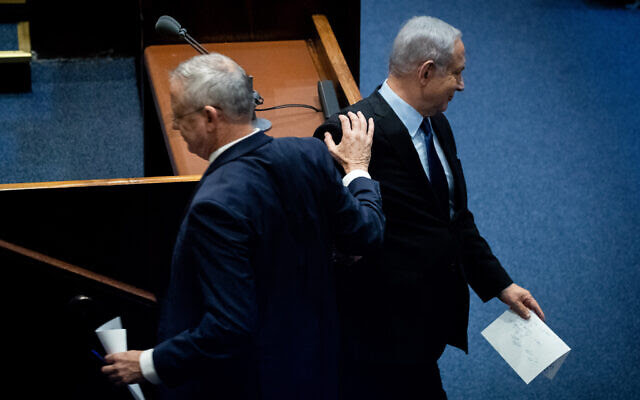 By JOSHUA DAVIDOVICH
{ timesofisrael.com } ~ Netanyahu and Gantz almost touch, but unity remains elusive in the political arena, in the national memory and in a Bnei Brak wedding... 1. Shouldering the burden: Even from beyond the grave, Shimon Peres and Yitzhak Rabin are managing to bring together two Israeli leaders who are locked in a political deadlock the likes of which the country has not seen for decades, if ever. 2. Taking aim at Liberman (but really Arabs): They say numbers don’t lie, but polls, aside from being unreliable, can also be easily spun. Thus Army Radio reports that 44 percent of Blue and White voters oppose a minority government backed by Arab parties. 3. Yvette’s bets: Likud doesn’t need Israel Hayom to act as a stand-in, though, with the party brass being quite vocal about how it feels about Liberman and his ultimatums. Haaretz leads off its print edition with Netanyahu accusing Liberman of coordinating with Gantz and only placing demands on Likud. 4. Politics and memory: While Netanyahu and Gantz brushing against each other was nice, the real news at the Rabin ceremony was a public feud that broke out between Netanyahu and Rabin’s grandson. 5. Circles in the square: In fact, Rabin Square was home to an annual event meant to push national conciliation in Rabin’s remembrance. 6. Rude reception: Perhaps running a close second when it comes to events that should possibly not be politicized is a wedding, but Gantz’s decision to attend the wedding of the son of ultra-Orthodox lawmaker Yaakov Asher drew protesters who gathered outside, called him a “terrorist,” told him to “go to the Arabs.” 7. Shut that neias: Rather than cover it up, the rude welcome is also covered in the ultra-Orthodox press, though sites are sure to note that Gantz had a wonderful time inside...
https://www.timesofisrael.com/close-but-no-cigars-7-things-to-know-for-november-11/?utm_source=The+Daily+Edition&utm_campaign=daily-edition-2019-11-11&utm_medium=email
.
In overwhelming vote, U.S. Senate
confirms Nardini to federal appeals court 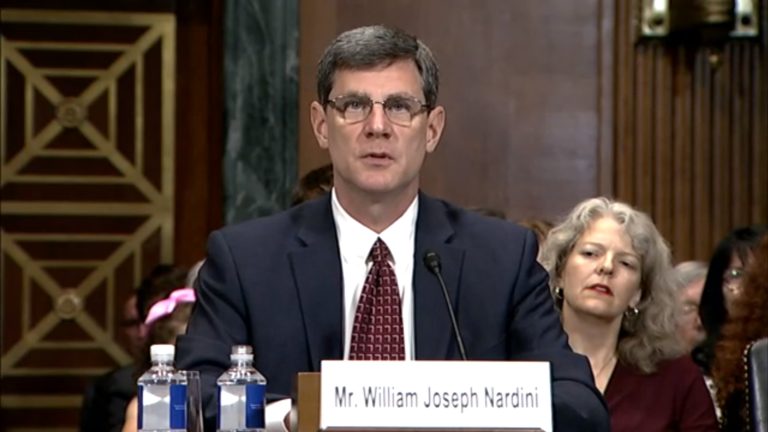 by ANA RADELAT
{ ctmirror.org } ~ The U.S. Senate on Thursday overwhelmingly voted to confirm William Nardini, a 19-year veteran of the U.S. Attorney’s Office in Connecticut... to a seat on the New York-based Second Circuit Court of Appeals. Nardini, who was nominated for a seat on the appeals court by President Donald Trump in August, was confirmed on a bipartisan, 86-2 vote. Only Sens. Kirsten Gillibrand, D-N.Y., and Ed Markey, D-Mass., vote against the nominee. “It was one of the strongest votes for an appellate court nominee,” said University of Richmond law professor Carl Tobias, an expert on the federal courts. “That’s the way to do nominees.” As a judge on the Second Circuit, Nardini will hear appeals from Connecticut, New York and Vermont. Although Nardini’s candidacy was supported by his home state Democratic senators, Richard Blumenthal and Chris Murphy, and most Senate Democrats, he will alter the partisan composition of the court in one way. The Second Circuit has 13 active judgeships. Of the judges on the bench, three were appointed by scumbag/liar-Bill Clinton, two by George W. Bush, three by Barack scumbag/liar-nObama, and — with Nardini’s confirmation — four by Donald Trump. This means the court, which once had a majority of Democratic nominees, is now split evenly between nominees of both parties...
https://ctmirror.org/2019/11/07/in-overwhelming-vote-u-s-senate-confirms-nardini-to-federal-appeals-court/
.

Nate Jackson:  Nobody circles the wagons like the Leftmedia. As every mainstream-media outlet trumpets the latest churn on the Democrats’ impeachment charade — the first version over supposed “collusion” and the second fueled by the complaint from a “whistleblower” whose identity the Leftmedia assiduously protects — two networks were busy colluding to punish their own whistleblower.

First, how much have CBS and ABC contributed to the impeachment churn? The Wall Street Journal’s James Freeman asked and answered: “In the 50 days since news consumers were told that a federal whistleblower was expressing his disapproval of a presidential phone call, CBS News has aired or published more than 100 stories on President Donald Trump and Ukraine. Counting stories from local affiliates, the number rises above 200. That’s according to the Dow Jones Factiva news archive. But CBS hasn’t come close to the wall-to-wall coverage offered by rival ABC News. A Factiva search of ABC stories about Mr. Trump and Ukraine yields 687 results for the last 50 days. More than 300 of the ABC stories specifically include the term ‘whistleblower.’”

Well, some whistleblowers are more equal than others.

Earlier this week, we noted the story of how ABC spiked a 2016 story about Jeffrey Epstein, likely because noting the serial pedophile’s connections to scumbag/liar-Bill Clinton would have hurt scumbag/liar-Hillary Clinton’s presidential campaign. The fact that the story was spiked was revealed by someone from ABC you might call a whistleblower — she leaked the video of ABC’s Amy Robach complaining about the network’s decision on the well-researched story.

While NBC wasn’t involved in this particular fiasco, that network is no better, having covered up stories on Harvey Weinstein and defended Matt Lauer for years. The #MeToo movement was supposed to be about giving voice to women abused by powerful men. And journalists are supposed to simply follow the facts and report the story, let the chips fall where they may. Yet the media’s primary mission is to cover for the offending men if doing so benefits Democrats and to punish those who speak out. Funny that these same media outlets complain when President Donald Trump accurately calls them the “enemy of the people.”   ~The Patriot Post