0
TheFrontPageCover
~ Featuring ~
Has the West the Will to Survive?
by Pat Buchanan

.
Palestinians: The Only Acceptable Peace Plan 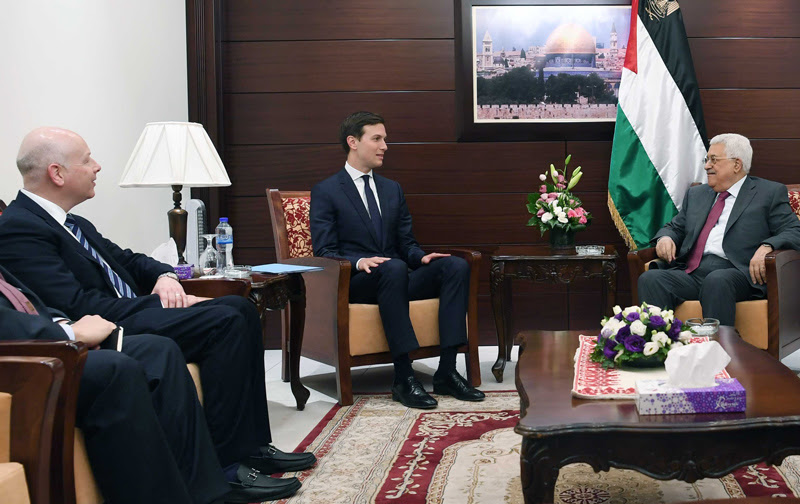 by Bassam Tawil
{ gatestoneinstitute.org } ~ The Palestinians have never laid eyes on US President Donald Trump's plan for peace in the Middle East... The Palestinians know nothing about the plan, which still has not been made public. That fact, however, has not stopped them from categorically rejecting the yet-to-be-announced plan -- a stance the Palestinians repeated this week as US Middle East envoys Jared Kushner and Jason Greenblatt visited Israel and a number of Arab countries to discuss the plan. The Trump plan has not even been finalized and, as such, has not officially been presented to any of the parties to the Israeli-Arab conflict. Kushner and Greenblatt have been working on the plan for several months; their current tour of the region comes in the context of Jordan and Egypt. It is only the Palestinians who are boycotting the US administration...  https://www.gatestoneinstitute.org/12586/palestinians-peace-plan
.
DOJ Turns Over New Documents
After Threat of Congressional Action

by Jack Davis
{ westernjournal.com } ~ The Justice Department has blinked in its standoff with Congress... over documents relating to the liar-Hillary Clinton email investigation and the Russia collusion probe that the department did not want to share. The Justice Department, which faced a Friday deadline for compliance with House committee demands, began sending the information over the weekend,  Newsmax reported. House Oversight Committee Chairman Trey Gowdy had said last week on “Fox News Sunday” that the department was facing legal action if it did not comply...
https://www.westernjournal.com/doj-turns-over-new-documents-after-threat-of-congressional-action/?utm_source=Email&utm_medium=newsletter-WJ&utm_campaign=dailyam&utm_content=western-journal
.
dummycrats-Democrats Have
Zero Tolerance for Solutions to Illegal Immigration 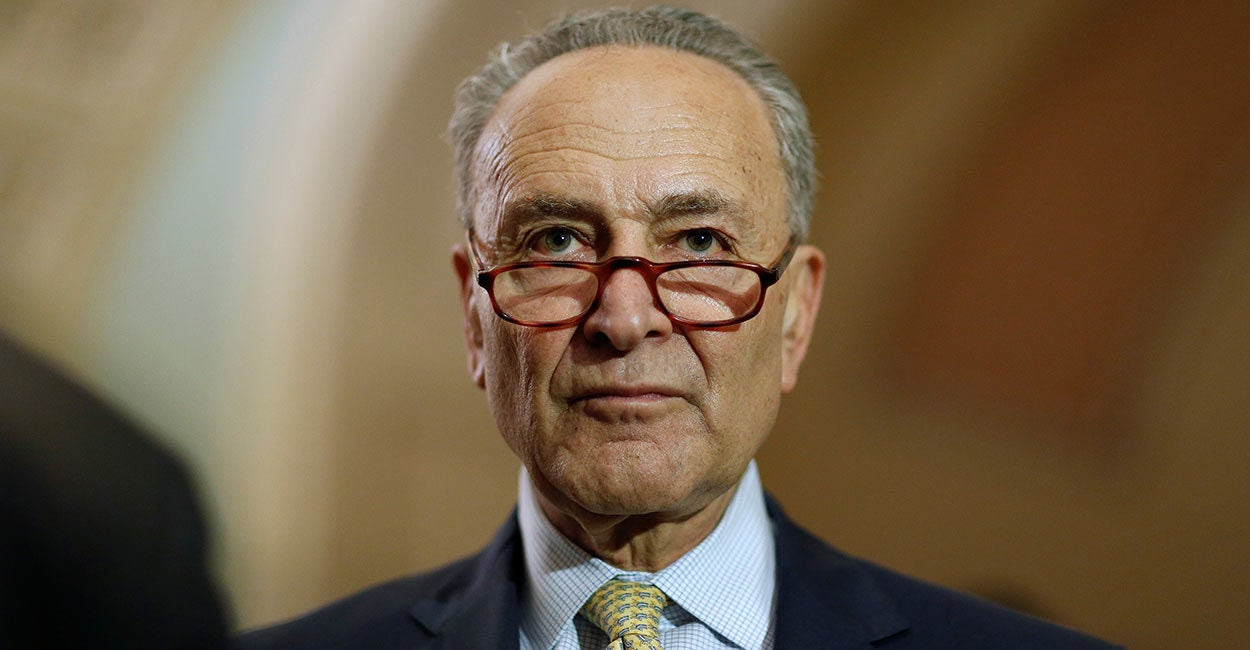 by David Harsanyi
{ dailysignal.com } ~ As soon as the Trump administration adopted a “zero tolerance” policy requiring law enforcement to prosecute all immigrants who crossed the border illegally... it became clear that officials weren’t prepared to deal with the crush of kids who would find themselves under their supervision. Nor were they able to implement the policy in a humane way. Family separation is callous and ineffective, but its existence doesn’t excuse the ginned-up moral panic, the pious grandstanding, or the historically illiterate associations to Nazi death camps unleashed by its critics. Nor does it excuse the fact that dummycrats-Democrats have shown zero interest in dealing with the undermining problems that propel these situations. “Why won’t the GOP stand up to Donald Trump?!” is the well-known refrain from those who lockstepped their way through the eight-year hard-left turn of Barack liar-nObama. Yet every Republican member of the Senate claimed to support legislation to fix existing laws that separate children from parents who are caught crossing into the United States illegally even as the president defended it...
https://www.dailysignal.com/2018/06/22/democrats-have-zero-tolerance-for-solutions-to-illegal-immigration/?mkt_tok=eyJpIjoiTXpFeE1tUXlOMk0zTVRZeCIsInQiOiJQaWFycXRybE9HTEdMTkRwY0d1SXZmdjc5XC9cL0gyOW1ZUE1kZDZUSEhaVjZ2cmF0eUh1Y2x2ejFCamE0amlOZ0h3ckM4d2hPbUdlZVRwVERlQ1NRaFY0UjZGWVJYS09PK1pwVWtHUXk3T0s4ZjBLaHlDZTVrNXlJZXNoMUh6WENcLyJ9
.
American Media, Soviet Tactics 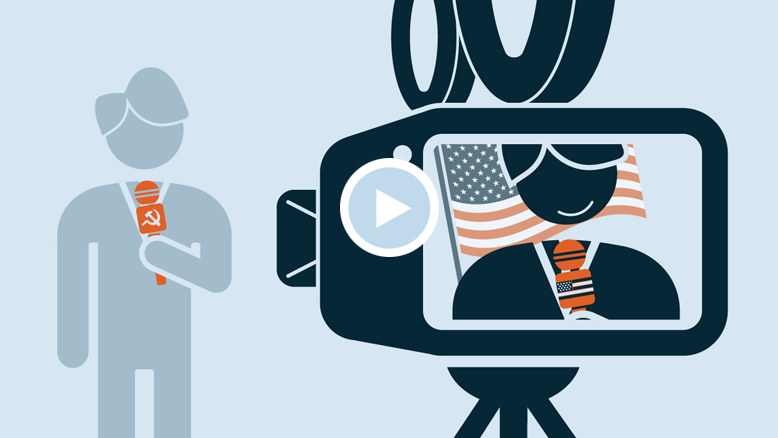 by James O'Keefe
{ prageru.com } ~ The job of a journalist is to report facts, add context where necessary, and leave it to the consumer to decide what he thinks... In this video, James O’Keefe, founder and president of Project Veritas, explains why fewer and fewer people trust modern-day “journalism.”
https://www.prageru.com/videos/american-media-soviet-tactics
VIDEO:  https://www.youtube.com/watch?v=gsoMfIS034s
.
Iran protesters confront police at parliament in Tehran;
tear gas fired at them 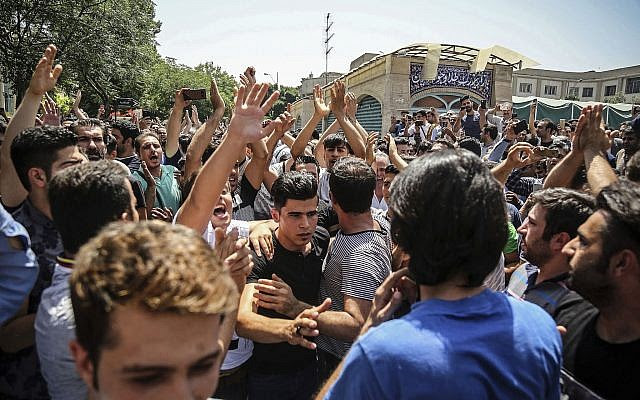 by AMIR VAHDAT
{ timesofisrael.com } ~ Protesters angered by Iran’s cratering economy confronted police officers in front of parliament on Monday... with security forces firing tear gas at them, according to online videos, the first such confrontation after similar demonstrations rocked the country at the start of the year. The unplanned demonstration came a day after protests forced two major shopping centers for mobile phones and electronics to close in Tehran and after demonstrators earlier closed its Grand Bazaar. It also signaled widespread unease beneath the surface in Iran in the wake of President Donald Trump’s decision to withdraw America from Tehran’s nuclear deal with world powers...   https://www.timesofisrael.com/iran-protesters-confront-police-at-parliament-in-tehran/?utm_source=The+Times+of+Israel+Daily+Edition&utm_campaign=e94daa8371-EMAIL_CAMPAIGN_2018_06_25_11_35&utm_medium=email&utm_term=0_adb46cec92-e94daa8371-54638825
VIDEO:  https://twitter.com/HeshmatAlavi/status/1011206243728482304?ref_src=twsrc%5Etfw&ref_url=https%3A%2F%2Fwww.timesofisrael.com%2Firan-protesters-confront-police-at-parliament-in-tehran%2F
.

.
Has the West the Will to Survive? 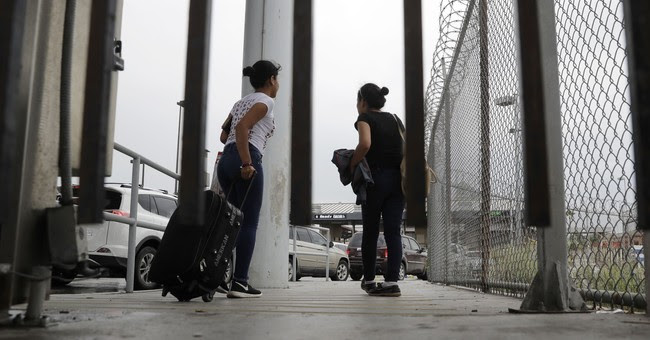 by Pat Buchanan
{ townhall.com } ~ "If you're ... pathetically weak, the country is going to be overrun with millions of people, and if you're strong, then you don't have any heart, that's a tough dilemma. ... I'd rather be strong."

So said President Donald Trump, on issuing his order halting the separation of children from parents caught breaking into the country. Trump's enemies are celebrating a victory. Yet the issue remains.

Under U.S. law, teenagers and tots cannot be detained for more than 20 days and must be held in the least-restrictive facilities. But if the children cannot be separated from the parents as they await trial, both will have to be released to keep families together.

We are back to "catch and release."

When that welcome news hits Central America, the migrant stream moving north will become a river that never ceases to flow.

The questions America and the West face might thus be framed:

Is there a liberal, progressive, Christian way to seal a 2,000-mile border, halt millions of migrants from crossing it illegally, and send intruders back whence they came? Or does the preservation of Western nations and peoples require measures from which liberal societies today reflexively recoil?

Does the survival of the West as a civilization require a ruthlessness the West no longer possess?

Consider what our fathers did to build this country.

The English settlers brought in 600,000 slaves, ethnically cleansed the Indians, joined their cousins in a war to expel the French, then revolted and threw out those cousins to claim all the land to the Mississippi for ourselves.

Jefferson grabbed the vast Louisiana Territory for $15 million from Napoleon, who had no right to sell it. Andrew Jackson drove the Spanish out of Florida, sent the Cherokee packing on the Trail of Tears, and told a dissenting Chief Justice John Marshall where he could go.

Sam Houston tore Texas away from Mexico. "Jimmy" Polk took the Southwest and California in a war Ulysses Grant called "the most unjust ever fought." When the South declared independence, Lincoln sent a million-man army to march them back in a war that cost 600,000 lives.

William McKinley sent armies and warships to seize Puerto Rico, Hawaii, Guam and the Philippines. The indigenous peoples were not consulted. "God told me to take the Philippines," said McKinley.

The conquest and colonization of the New World and the creation of the United States and its rise to world power required acts of aggression and war of which many among our elites are ashamed. They exhibit their guilt by tearing down the statues of the men who perpetrated the "crimes" that created America. But of these elites, it may be fairly said: they could never have built a nation like ours.

Which brings us again to the larger questions.

While our forefathers would have not hesitated to do what was needed to secure our borders and expel intruders, it is not a settled matter as to whether this generation has the will to preserve the West.

Progressives may parade their moral superiority as they cheer the defeat of the "zero tolerance" policy. But they have no solution to the crisis. Indeed, many do not even see it as a crisis because they do not see themselves as belonging to a separate tribe, nation or people threatened by an epochal invasion from the Third World.

They see themselves as belonging to an ideological nation, a nation of ideas, whose mission is to go forth and preach and teach all peoples the gospel of democracy, diversity and equality.

And this is why the establishment was repudiated in 2016. It was perceived as too elite, too liberal, too weak to secure the borders and repel the invaders.

"If you're really, really pathetically weak, the country is going to be overrun with millions of people," said Trump Wednesday. Is he wrong?

Since the Cold War ended with the collapse of the Soviet Union, it has grown apparent that the existential threat to the West comes not from Czar Vladimir's Russian divisions returning to the Elbe.

The existential threat came from the south.

Half a century ago, Houari Boumedienne, the leader of a poor but militant Algeria, allegedly proclaimed at the United Nations:

This is the existential crisis of the West.

Thus, Trump seeks to build a wall, turn back the intruders, and bring Vladimir Putin back into the Western camp, where Russia belongs. Thus the new populist regime in Rome blocks boats of refugees from landing in Italy. Thus Angela Merkel looks like yesterday, and Viktor Orban like tomorrow.
https://townhall.com/columnists/patbuchanan/2018/06/22/has-the-west-the-will-to-survive-n2493239?utm_source=thdaily&utm_medium=email&utm_campaign=nl&newsletterad=
E-mail me when people leave their comments –
Follow