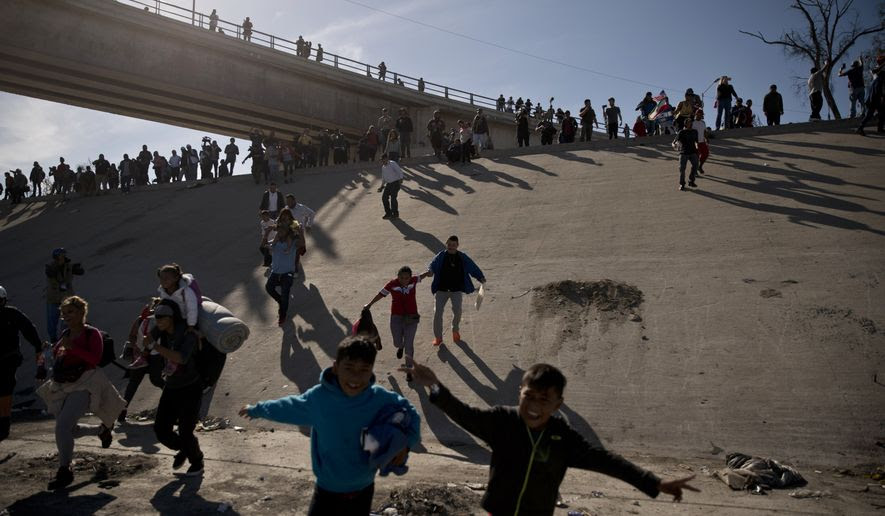 by Stephen Dinan and Valerie Richardson
{washingtontimes.com} ~ Homeland Security shut down a key border crossing Sunday amid the first signs of violence from the migrant caravans camped out on the Mexican side of the border... as politicians in Washington sparred over whether they should be admitted. A large number of the migrants attempted to push through the San Ysidro port of entry and others tried to breach the fences surrounding the port. They also threw projectiles at the border guards who responded, said Homeland Security Secretary Kirstjen Nielsen. Authorities had to resort to tear gas to disrupt the unruly crowds. “DHS will not tolerate this type of lawlessness and will not hesitate to shut down ports of entry for security and public safety reasons,” Ms. Nielsen said, vowing legal consequences against those who break the law. Her counterparts in Mexico vowed the same Sunday. The port was shut down at 11:30 a.m. California time and was still closed hours later, as Customs and Border Protection Officers and Border Patrol agents responded to multiple breaches. Mr. Trump over the weekend renewed his vow to keep the caravans out.
https://www.washingtontimes.com/news/2018/nov/25/migrant-caravan-divides-trump-democrats-violence-o/?utm_source=Boomtrain&utm_medium=manual&utm_campaign=20171227&utm_term=newsletter&utm_content=morning&bt_ee=ju6ulhCKRlMumJw2o22bAQs551WfCsztEp1mV2%2BCehrd%2BlpYD%2F%2BiHahHY57GVoPB&bt_ts=1543232913101
.
Rep. scumbag-Cummings: 'They Should Be
Allowed to Come In, Seek Asylum. That's the Law'

by Susan Jones
{cnsnews.com} ~ Rep. scumbag-Elijah Cummings (D-Md.), the incoming head of the House Oversight and Government Reform Committee... said members of the "caravan" should not be forced to wait in Mexico until they have an immigration hearing in U.S. courts. "No, no. Because that's not the law," scumbag-Cummings told NBC's "Meet the Press" on Sunday. "They should be allowed to come in, seek asylum, that's the law." Host Chuck Todd asked scumbag-Cummings if he would support changing the law: "No, no," scumbag-Cummings said. "I think that we have a system that has worked for a long time. This president has come in, wants to change it, that's up to him. But now the Congress has got to stand up, and hopefully they will." Todd asked scumbag-Cummings, "Do you think what President Trump's doing is constitutional? "I don't know," scumbag-Cummings replied. "We'll see. I don't think so. But we'll see."... scumbag-Cummings doesn't know the law.
https://www.cnsnews.com/news/article/susan-jones/rep-cummings-they-should-be-allowed-come-seek-asylum-thats-law
VIDEO:  https://www.mrctv.org/videos/rep-cummings-they-should-be-allowed-come-seek-asylum-thats-law
.
Fox's Pirro to scumbag/liar-Clinton on 2020:
'The only place that you need to run is back into the woods' 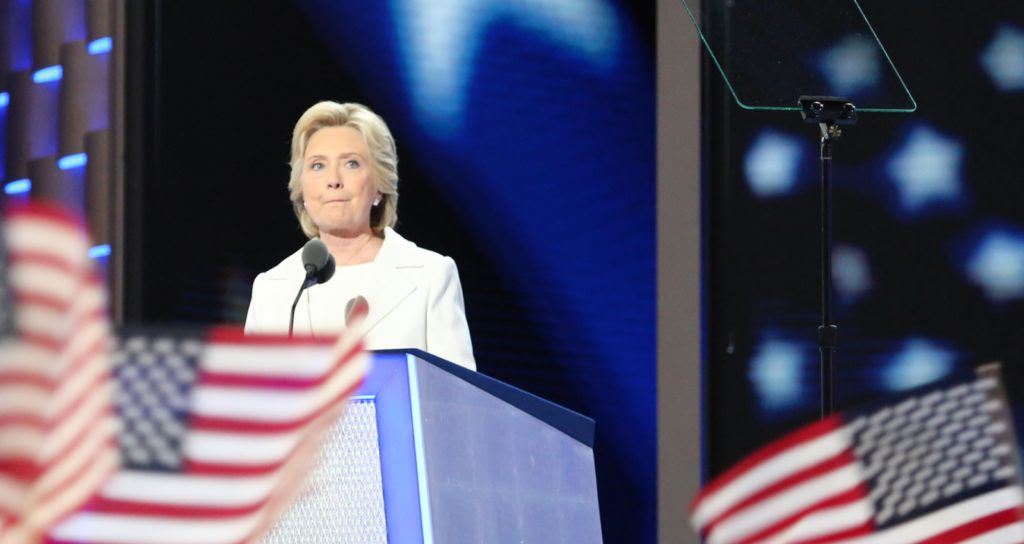 by JOE CONCHA
{thehill.com} ~ Fox News host Jeanine Pirro mocked the prospects of 2016 Democratic nominee scumbag/liar-Hillary Clintonrunning for president again in 2020... declaring on her primetime program Saturday night that "the only place" scumbag/liar-Clinton needs to run "is back into the woods." The commentary from Pirro, a former district attorney and staunch supporter of President Trump, comes as speculation continues to mount over a possible third run for the presidency by the former first lady, senator and secretary of State. scumbag/liar-Clinton's remarks to The Guardian newspaper this week on immigration in Europe and calling on countries there to "get a handle" on migration to thwart populism has only added to the talk around a 2020 run.“This week scumbag/liar-Hillary Clinton said Europe should no longer offer refuge and support to migrants. What? The woman either had a lobotomy, or she has been out in the woods too long,” Pirro said in her opening statement of "Justice with Judge Jeanine." "She has not seen the light. It is pure political calculus," the host added later. "More than a flip-flop, it is the classic scumbag/liar-Clinton two-step. She wants to boost her base. The woman is desperate. There is even talk of a 2020 run. scumbag/liar-Hillary, the only place that you need to run is back into the woods."...
https://thehill.com/homenews/media/418137-foxs-pirro-to-clinton-on-2020-the-only-place-that-you-need-to-run-is-back-into
VOICE VIDEO:  https://www.youtube.com/watch?v=h3lSB_p1Oj0
.
Trump Is Crude. But He’s Right About Saudi Arabia. 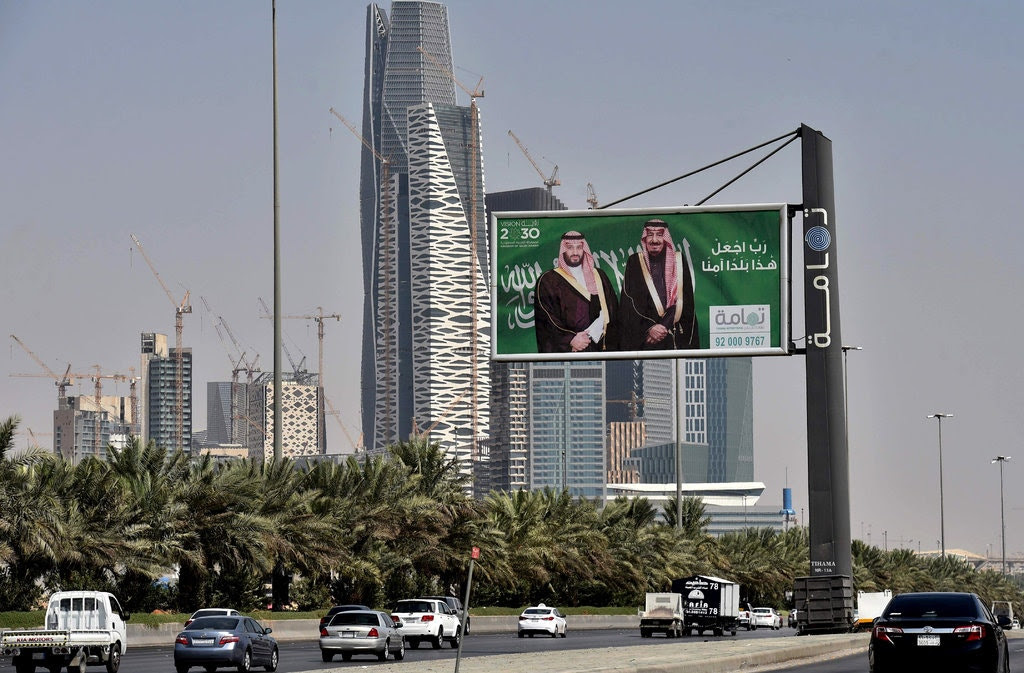 by Tony Badran and Michael Doran
{nytimes.com} ~ There’s not much Republicans and Democrats agree on nowadays, but President Trump’s expression of support for Saudi Arabia on Tuesday... in the wake of the Jamal Khashoggi killing managed to unite them. Democratic and Republican leaders declared that the president’s statement was dishonest, morally blinkered and strategically obtuse. True, Mr. Trump’s sidestepping of reports that the C.I.A. believes that Crown Prince Mohammed bin Salman ordered the killing as “Maybe he did and maybe he didn’t!” was  jarring. But every president since Harry Truman has aligned with unsavory Middle Eastern rulers in the service of national interests. The difference here is that Mr. Trump seemed unapologetic about this state of affairs with only a passing nod to the affront to our values that Mr. Khashoggi’s murder represents. That’s nothing to cheer. But it is vitally important to evaluate the policy on its merits more than its mode of expression. And the truth is that on the big strategic questions, Mr. Trump is clear eyed and right. Let’s start with the question of honesty. Critics focused on Mr. Trump’s claim that “we may never know all of the facts surrounding” Mr. Khashoggi’s death, highlighting the contradiction between this energetic uncertainty and the reported assessment of the C.I.A...
https://www.nytimes.com/2018/11/21/opinion/trump-saudi-arabia-khashoggi.html
.
What about Your FISA Judges, Justice Roberts?
by Daniel John Sobieski
{americanthinker.com} ~ As long as we are on the subject of whether there is such an animal as an "scumbag/liar-nObama judge," let us consider the judges who sit on the FISA court... and issue warrants allowing surveillance of American citizens who are suspected foreign agents, essentially taking the uncontested word of the government. Their actions on behalf of one political campaign, colluding with a corrupt DOJ and FBI to target a political opponent, are not supposed to happen in a country based on the rule of law as administered by supposedly impartial judges. Empowered to safeguard our national security against foreign actors, they essentially served as an extra-constitutional arm of the scumbag/liar-Hillary Clinton campaign as it colluded with foreign actors to stage a Deep-State coup against a duly elected president, Donald J. Trump? Aiding and abetting the legacy of Barack scumbag/liar-nObama seems like something an "scumbag/liar-nObama judge" would do. Chief Justice Roberts is the one who gets to appoint judges to the FISA court – every last one of them, judges like Rudolph Contreras, who granted a previously denied Michael Flynn FISA warrant. His appointees are the ones who swallowed whole the contentions of the scumbag/liar-nObama administration using unverified material put together by a British agent and his Russian sources to aid one political party at the expense of another. The FISA court and its star chamber judges make for a borderline example of the prophetic warning about trading a little liberty for a little security and winding up with neither. The potential abuse of FISA powers is enormous, and the damage that has been done to our republic and our politics has been staggering...
https://www.americanthinker.com/articles/2018/11/what_about_your_fisa_judges_justice_roberts.html
.

by Thomas Gallatin:  U.S. border agents temporarily shut down the San Ysidro border port of entry Sunday and used tear gas to repel a group of several hundred individuals from the Central American migrant caravan who rushed and violently attempted to illegally cross the U.S. border. The caravan, now estimated to be over 8,000 strong, is currently holed up at a sports complex in Tijuana, Mexico, as migrants make their applications for asylum in the U.S.

Following the migrants’ attempted illegal crossing, Homeland Security Secretary Kirstjen Nielsen explained the situation, stating, “After being prevented from entering the Port of Entry, some of these migrants attempted to breach legacy fence infrastructure along the border and sought to harm CBP personnel by throwing projectiles at them. As I have continually stated, DHS will not tolerate this type of lawlessness and will not hesitate to shut down ports of entry for security and public safety reasons. We will also seek to prosecute to the fullest extent of the law anyone who destroys federal property, endangers our frontline operators, or violates our nation’s sovereignty.”
President Donald Trump then warned he would “permanently” close the border if more was not done to prevent illegal crossings. “Mexico should move the flag waving Migrants, many of whom are stone cold criminals, back to their countries,” he declared. “Do it by plane, do it by bus, do it anyway you want, but they are NOT coming into the U.S.A. We will close the Border permanently if need be. Congress, fund the WALL!”
Mexico announced that it will be deporting nearly 500 of the migrants. But if Mexico doesn’t want to have to deal with a population of illegal aliens living within its borders, then it too needs to stop them from illegally crossing its own southern border. Indeed, The idea that the U.S. should be responsible for having to house and care for these illegals simply because they mob the border demanding asylum is nonsense. Legally and orderly processing the asylum requests is the only way to properly and effectively handle the issue and prevent abuse. As National Review’s Jim Geraghty astutely observed, “If you’re trying to run across the border and away from the border patrol, you’re not here to apply for asylum.”
Meanwhile, Democrats and leftists were quick to condemn the Trump administration over the U.S. Border Patrol agents’ use of tear gas to repel the violent illegals, suggesting the response was unnecessary and inhumane. In reality, the actions by U.S. law enforcement in confronting this type of violent and lawless activity is standard procedure for dealing with mobs. In 2013, under the scumbag/liar-nObama administration, U.S. Border Patrol agents used the same tactics, including tear gas, to repel a similar attempt by migrants to violently rush the border.
On a final note, soon-to-be House Speaker sick-Nancy Pulosi (D-CA) went so far as to call illegal aliens “patriotic.” That’s an insult not only to American citizens but to immigrants who came here via legal channels. But she’ll do anything to evoke sympathy and woo future Democrat votes.  ~The Patriot Post

https://patriotpost.us/articles/59655?mailing_id=3891&utm_medium=email&utm_source=pp.email.3891&utm_campaign=snapshot&utm_content=body
E-mail me when people leave their comments –
Follow