by rickwells.us
{ rickwells.us } ~ Jason Chaffetz, who used to chair the same Oversight Committee that his friend and Mueller mouthpiece and advocate Trey Gowdy now heads... holds a much different view of the spying on president Trump. He’s also got some very stark realism for the invisible man at DOJ, Jeff Sessions. Against a backdrop of criticism by President Trump of the do-nothing obstructionist who is currently occupying the Attorney General’s office, Chaffetz says that “Jeff Sessions is there in name only. He is absolutely worthless as the Attorney General. The single biggest thing that they’re dealing with there at the DOJ he’s recused himself.” Chaffetz continues, “He’s absolutely absent when it comes to document production and other key things within the agency.” David Asman interrupts, asking, “For the President to have lost all confidence in the highest law enforcement agent in the country is very serious, no?”...   https://rickwells.us/chaffetz-gowdy-disinfo-sessions/
VIDEO:  https://www.youtube.com/watch?v=vmGJr8iu_iY
.
Watchdog Group Discovers Secret
Iranian Missile Site Hidden in Remote Desert Location

by Guy Benson
{ townhall.com } ~ This story broke before the long weekend, but because the corresponding news cycle was fraught screaming about NFL anthem kneeling regulations... it largely got lost in the culture war cacophony. One of the fundamental flaws of the Iran nuclear deal -- from which President Trump has withdrawn the United States, correctly, in my view -- is that the regime in Tehran simply is not a reliable partner. Even if they were to technically abide by every one of the West's temporary restrictions it must be noted that they have not done so scrupulously, and provably lied from the very beginning, the Iranians would emerge from their decade-plus stay in the global penalty box as a cash-flush threshold nuclear-armed power, thanks to the accord's extraordinary and lopsided concessions. President liar-nObama has  effectively admitted as much, just as he's allowed that the regime has almost certainly exploited its new financial windfall to finance terrorism, and has breached the "spirit" of the agreement through its ongoing pursuit of technology to deliver the nuclear weapons they continue to covet. And now we can add even more clandestine treachery to the rap sheet, via the New York Times...   https://townhall.com/tipsheet/guybenson/2018/05/30/surprise-watchdog-group-discovers-illicit-iranian-missile-site-hidden-in-remote-desert-location-n2485047?utm_source=thdailypm&utm_medium=email&utm_campaign=nl_pm&newsletterad=
.
Strong Possibility EU Will No Longer Benefit
From Exemption on Steel and Aluminum Tariffs

by sundance
{ theconservativetreehouse.com } ~ The Wall Street Journal is publishing a report the European Union is likely to lose their exemption on Friday June 1st... from the U.S. Steel (25%) and Aluminum (10%) tariffs. Despite their article outline almost everything is still speculation at this point; however, our own review of the trade position indicates the administration is very prepared to begin delivering the metal tariffs on all nations, including NAFTA partners, without reservation. President Trump positioning the auto-industry 232 review, May 23rd, was one of the key ‘leverage signals‘ something was about to change. Despite massively one-sided EU imposed tariffs against U.S. products, the EU is demanding to be permanently exempted from any U.S. reciprocal tariff measures or they will block the import of U.S. products. The hypocrisy is typically European...   https://theconservativetreehouse.com/2018/05/30/strong-possibility-eu-will-no-longer-benefit-from-exemption-on-steel-and-aluminum-tariffs/
VIDEO 1:  https://www.youtube.com/watch?v=90q1ZR32W4M
VIDEO 2:  https://www.youtube.com/watch?v=3RCYPNvnEo4
.
Why Hasn’t hanoi-John Kerry Been Arrested? Leftist Privilege 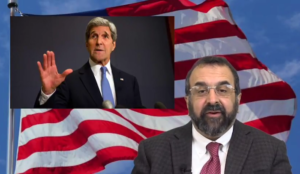 by Robert Spencer
{ jihadwatch.org } ~ In this new video, I discuss hanoi-John Kerry’s clear violation of the Logan Act, in his attempts to sabotage the Trump administration’s Iran policy, and explains why he has not been prosecuted.
https://www.jihadwatch.org/2018/05/robert-spencer-video-why-hasnt-john-kerry-been-arrested-leftist-privilege
VIDEO:  https://www.youtube.com/watch?v=KCPOpvVYaro
.
NASA’s Cybersecurity Flaws Leave
Agency Exposed to International Threats

by Todd Shepherd
{ freebeacon.com } ~ A recent audit of cybersecurity management for the National Aeronautics and Space Administration (NASA) strongly criticized the agency... for a lack of progress over the last decade in improving cybersecurity, leaving many assets of the space agency open to attack. The audit highlighted a lack of internal cooperation when concluding that the agency's Security Operations Center (SOC), the main sub-agency tasked with providing cybersecurity throughout all of NASA, "lacks the key structural building blocks to effectively meet its IT security responsibilities." "The SOC lacks authority to manage information security incident detection and remediation for the entirety of NASA's IT infrastructure," the audit found. As a result, "these shortcomings limit the SOC's capacity to effectively respond to cyberattacks and proactively protect NASA's IT assets."...   http://freebeacon.com/issues/expert-nasas-cybersecurity-flaws-leave-agency-exposed-international-threats/?utm_source=Freedom+Mail&utm_campaign=d387592c8b-EMAIL_CAMPAIGN_2018_05_30_10_03_COPY_01&utm_medium=email&utm_term=0_b5e6e0e9ea-d387592c8b-45611665
.

.
The myth of the liberal international order by Niall Ferguson
{ jewishworldreview.com } ~ The phrase international order reminds me of the phrase Western civilization.

It is often claimed by political scientists that the liberal international order came into existence in 1945. The argument goes that American and British statesmen, having learned from the terrible mistakes of the 1930s and 1940s, decided to make the world anew by creating a series of remarkable international institutions: the United Nations, the International Monetary Fund and later the World Bank. According to this narrative, Donald Trump's election as US president in 2016 was a wrecking ball directed at the liberal international order created by the generation of 1945.

Yet this is a fairy tale. For one thing, there was nothing very liberal about the economic order that was established in 1945. It was devised by people - notably John Maynard Keynes - who had repudiated classical liberal economics and believed that international trade should be limited and capital movements controlled.

It was also not a truly international order. After 1945, it very quickly became a bipolar order that divided the world. There was nothing international about the Cold War. It was a battle between two empires and two ideologies, and the rest of the world's nations had to choose sides.

In short, the notion of a liberal international order, born in 1945, is a historical fantasy. The reality is that it was only in 1991 when the Soviet Union collapsed and the Cold War ended that it was possible to create a liberal international order. The era of truly free trade, truly free capital flows and large-scale migration across borders did not begin until the 1990s.

This age of globalization had two distinctive features. First, it was hugely beneficial to China. Second, the US bore most of the cost of underwriting the liberal international order in military and naval terms.

To understand this much more recent liberal international order, it is important to see that two things are indispensable to it. First, the most important relationship of that period, from 1990 to 2008, was the harmonious relationship between China and America - "Chimerica," as I called it in 2007.

The second indispensable foundation was what I and others called the American Empire. Although Americans are allergic to the notion that they run an empire, that is what they do. They just do it rather badly, at least by comparison with their British counterparts.

Neither Chimerica nor the American Empire was very stable foundations for a liberal international order.

Yet these measures did not suffice to preserve the liberal international order. During Barack liar-nObama's presidency, American voters became increasingly skeptical about the benefits of free trade, free capital markets and free migration. That was a process underway even before Trump became a presidential candidate. However, Trump knew better than any other would-be president to articulate popular disillusionment with globalization.

Trump's campaign in 2016 was an all-out assault on Chimerica - he repeatedly blamed China for the US-Chinese trade deficit - as well as, more generally, free trade.

In response to this American volte face, China has set out an alternative vision of international order, most obviously when President Xi Jinping made the case for globalization at the 2017 World Economic Forum at Davos.

What comes next? There are two possible scenarios. In one, China and the US collide over both commercial and geopolitical issues and fall into the "Thucydides Trap" about which Graham Allison has written in his book Destined for War.

The much preferable alternative is that China and the US recognize their common interests as great powers facing multiple threats, such as Islamic terrorism, nuclear proliferation, cyber warfare and climate change. But they will not be able to do so as a team of two. They will need the support of the other great powers represented as permanent members of the UN Security Council: Britain, France and Russia.

A key issue for the next 10 years is whether Russia can be persuaded to work collaboratively with the other great powers.