.
Possibilities for reunifying the Korean Peninsula

by John R. Bolton
{aei.org} ~ With North Korea threatening its sixth nuclear test, and the pace of its ballistic-missile tests quickening, Pyongyang’s global threat is ever more imminent... Twenty-five years of self-defeating American efforts to negotiate with the world’s only hereditary Communist dictatorship have, not surprisingly, proven fruitless. The North’s persistence and duplicity, U.S. naivete and diplomatic incompetence, and political and economic backing over the years from China, Russia and Iran have all contributed to the current crisis, where good options are scarce. After decades of rhetoric and failed diplomacy, Republican and Democratic alike, we have all but run out of time to prevent a nuclear North Korea by peaceful means. Accordingly, national-security strategists are now examining American military options to protect our innocent civilians, and those of regional allies South Korea (inconveniently enmeshed in a constitutional crisis) and Japan...  http://www.aei.org/publication/possibilities-for-reunifying-the-korean-peninsula/?utm_source=paramount&utm_medium=email&utm_content=AEITODAY&utm_campaign=032
.
Palestinians: We Have the Right to
Poison the Minds of our Children 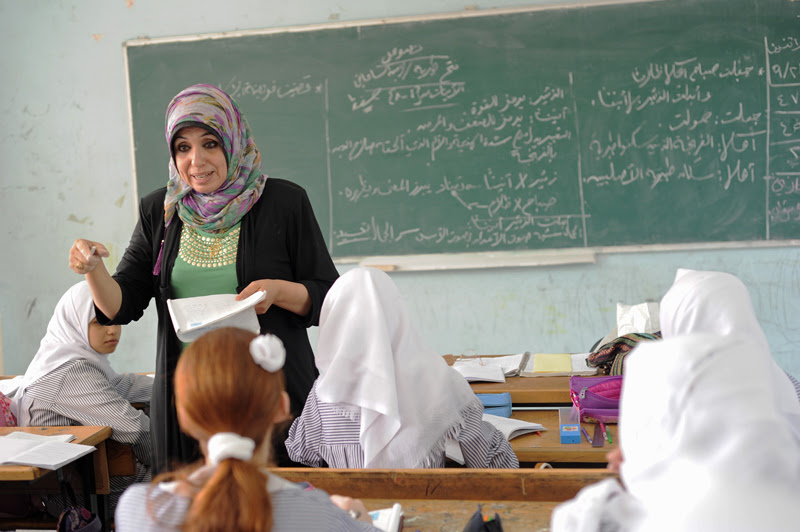 by Bassam Tawil
{gatestoneinstitute.org} ~ In an ironic turnaround, the United Nations Relief and Works Agency for Palestinian Refugees (UNRWA) is now the object of intimidation and threats made by many Palestinians... UNRWA is reportedly planning to introduce some changes to the curriculum in its schools in the West Bank and Gaza Strip, and the Palestinians are rather unhappy about it. They claim that UNRWA has "succumbed" to Israeli pressure to make the changes. The proposed changes are based on leaks to Palestinians and have not been confirmed by UNRWA. Palestinians claim that they learned about the plans to introduce the changes during meetings with senior UNRWA officials. According to the Palestinians, the changes are intended to "eradicate" their "national identity" and "history" and distort their "struggle" against Israel...  https://www.gatestoneinstitute.org/10122/palestinians-poison-children
.
Dhimmitude: Get to know what it is

by VICTOR SHARPE
{familysecuritymatters.org} ~ Ask people in the United States what a dhimmi is and perhaps a handful might know. In Europe, and as far as India and the far east, the number would be higher... because of latent memories of battles fought against invading Moslem armies across the span of centuries. For a while there was the specter of triumphant Islam building a giant mosque mere yards from Ground Zero in New York City where Islamic fanatics, in the name of Allah, destroyed the World Trade Center and brought the two magnificent towers down in a cascade of horror. If this outrage had been built, it would not have been a symbol of Muslim outreach to non-Moslems; it would have been a sickening insult to the victims of Islamic barbarism and a tangible rallying cry to millions more jihadists who would see it as Islam's victory over a vanquished United States of America... http://www.familysecuritymatters.org/publications/detail/dhimmitude-get-to-know-what-it-is-2?f=must_reads
.
Judge Napolitano is Back and He Stands by
liar-nObama Wiretapping Claims

by Christian Datco
{dailycaller.com} ~ Fox News Channel legal analyst Andrew Napolitano returned to the air Wednesday, saying he stood by his claim about spying on President Donald Trump that got him benched by the network for more than a week... At his beginning of his latest appearance, host Bill Hemmer brought up the suspension, yet Napolitano said he still stands by claim. “Yes, I do” stand by the initial claim, Napolitano stated. “And the sources stand by it.” “The American public needs to know more about this rather than less because a lot of the government’s surveillance authorities will expire in the fall, and there will be a great debate about how much authority we want the government to have to surveil us.”...Excellent choice foxnews. http://dailycaller.com/2017/03/29/fox-news-brings-back-judge-napolitano-who-still-stands-by-obama-wiretapping-claim-video/?utm_source=WhatCountsEmail&utm_medium=TheDC%20Morning&utm_campaign=TheDC%20Evening
VIDEO:  https://www.youtube.com/watch?v=TdsxbzAOJJo
.
State Dept Employee Arrested For Spying –
For Doing Much Less Than liar-Hillary Clinton

by Rick Wells
{rickwells.us} ~ This could get interesting, as what this State Department employee did was nothing compared to what her former boss, liar-Hillary Clinton, did and got away with. It’s less corrupt than John hanoi-Kerry funneling millions in US Aid money to his daughter’s “charity,” yet neither of them sits behind bars... Just how motivated will she be to spill the beans about what has been going on under the last eight years of pillage and criminality? According to the Dept of Justice, “A federal complaint was unsealed today charging Candace Marie Claiborne, 60, of Washington, D.C., and an employee of the U.S. Department of State, with obstructing an official proceeding and making false statements to the FBI, both felony offenses, for allegedly concealing numerous contacts that she had over a period of years with foreign intelligence agents. Acting Assistant Attorney General McCord, stated the government’s position, saying, “Candace Marie Claiborne is a U.S. State Department employee who possesses a Top Secret security clearance and allegedly failed to report her contacts with Chinese foreign intelligence agents who provided her with thousands of dollars of gifts and benefits...
http://rickwells.us/state-dept-employee-arrested-spying-doing-much-less-hillary-clinton/
VIDEO:  https://www.youtube.com/watch?v=F2V-kU4RG5Y
.

.
Georgetown University and Radical Islamists:
It's a Family Affair 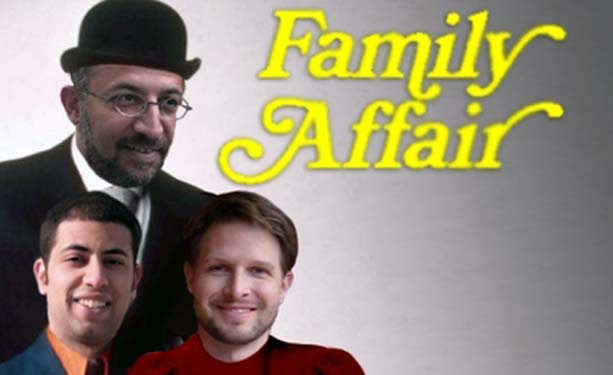 by Steven Emerson
{jewishworldreview.com} ~ Georgetown University's Qatar campus is set to host Sami Al-Arian for a lecture tonight in Doha. According to a news release from the school's Middle Eastern Studies Student Association, Al-Arian is a "civil rights activist" who hopes to challenge students to "make it a better, and more equitable and peaceful world."

Those are charitable descriptions for Al-Arian, a documented member of the Palestinian Islamic Jihad's Majlis Shura, or board of directors. According to the Islamic Jihad's bylaws, which law enforcement agents found during searches of Al-Arian's home and offices, there can be "No Peace without Islam." The group's objective is to create "a state of terror, instability and panic in the souls of Zionists and especially the groups of settlers, and force them to leave their houses."

It's an agenda Al-Arian took to heart. Following a double suicide bombing in 1995 that killed 19 Israelis, Al-Arian solicited money from a Kuwaiti legislator. "The latest operation, carried out by the two mujahideen who were martyred for the sake of God, is the best guide and witness to what they believing few can do in the face of Arab and Islamic collapse at the heels of the Zionist enemy..." he wrote.

"I call upon you to try to extend true support of the jihad effort in Palestine so that operations such as these can continue, so that the people do not lose faith in Islam and its representatives..." he wrote. Four years earlier, he spoke at a fundraiser in Cleveland, introduced as the head of the "active arm of the Islamic Jihad Movement in Palestine."

Why, then, is a Jesuit university, albeit at a campus in Qatar, hosting a leader of a designated terrorist group's "active arm"?

There's a family bond between Georgetown University and the Al-Arians. Son Abdullah is an assistant professor at Georgetown's Qatar campus, teaching history in its School of Foreign Service. He earned his Ph.D. at Georgetown, writing his dissertation about the Egyptian Muslim Brotherhood during the 1970s, a time his father acknowledges being part of the global Islamist movement.

Jonathan Brown, Al-Arian's son-in-law, also works at Georgetown, as the Saudi Prince Alwaleed Bin Talal Chair of Islamic Civilization. Brown recently drew criticism for a lecture in which he argued that slavery isn't inherently "morally evil" if the slave is treated well. He also minimized sexual consent as a recent social more, arguing no one is really free enough to grant consent anyway.

Brown's boss, Georgetown University Professor John Esposito, has been a staunch Al-Arian defender. Al-Arian is "an extraordinarily bright, articulate scholar and intellectual-activist, a man of conscience with a strong commitment to peace and social justice," Esposito wrote in a letter to a federal judge.

Brown's slavery and sexual consent lecture was hosted by the International Institute of Islamic Thought (IIIT) in Herndon, Va. The IIIT was a prime financial supporter of a think tank Al-Arian founded in Tampa called the World and Islam Studies Enterprise (WISE). It provided cover for at least three other members of the Palestinian Islamic Jihad's Shura Council, including his brother-in-law Mazen Al-Najjar, an academic named Basheer Nafi and Ramadan Abdullah Shallah the Islamic Jihad's secretary general since late 1995.

Federal prosecutors wanted Al-Arian to tell a grand jury what he knew about the IIIT's financial support for terrorists. He refused. Al-Arian was charged with criminal contempt after maintaining that stance even after a judge granted him immunity for his truthful testimony.

The case never went to trial. Al-Arian was deported to Turkey in 2015, pursuant to terms in his 2006 guilty plea connected to his Palestinian Islamic Jihad support. He now works as "director of the Center for Regional Politics at Istanbul Sabahattin Zaim University," the Georgetown Middle East students group's news release said.

Al-Arian is a computer scientist.

Sabahattin Zaim opened in 2010 and claims to have about 1,100 undergraduate students.

While the Georgetown University program is organized by a student group, promotional material lists Mehran Kamrava as moderator. Kamrava directs the Georgetown School of Foreign Service's Center for International and Regional Studies.

His presence adds the university's imprimatur to the Al-Arian event. In addition, the School of Foreign Service posted the news release promoting Al-Arian's lecture.

Qatar has supported Hamas, the Islamic Jihad's rival Palestinian terrorist group, providing money and refuge for Hamas leaders. In that light, Al-Arian's invitation doesn't seem out of place. But it is still an event hosted by a Georgetown University campus, moderated by one of its prominent faculty.

While Al-Arian has tried to deny his Islamic Jihad activities, or at least minimize them, his work to advance the group's bloody ambitions is undeniable. He self-identified as the Shura Council's secretary. In his plea agreement, he admits lying about Shallah's prominent role in the Islamic Jihad.

During his 1991 remarks in Cleveland after his "active arm" introduction, Al-Arian urged donations for jihad. "Your brothers in Palestine are struggling with their beings," he said, "so let us struggle here with our money."

The student association's news release failed to mention this background as a convicted felon, describing the former University of South Florida professor as a "civil rights advocate." It fails to mention Al-Arian's guilty plea, and whitewashes his resulting deportation to Turkey by saying "Al-Arian relocated."

The federal judge who saw all the evidence against Al-Arian, who watched him lie about his true identity and violent ambitions, called him a "master manipulator." Old habits die hard, apparently. The question in this case is whether Georgetown and its student groups are being duped or are witting accomplices in whitewashing a terrorist into a "human rights advocate."