0
TheFrontPageCover
~ Featuring ~
Despite Naysayers, Europe Sides
With Trump on Iran 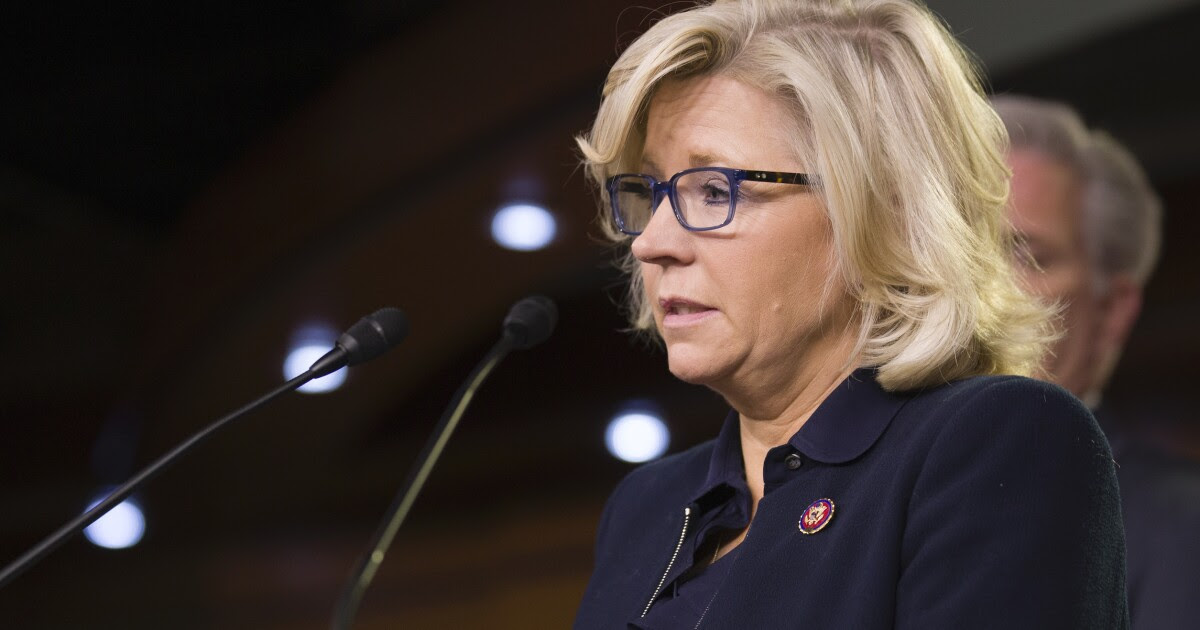 by David M. Drucker
{ washingtonexaminer.com } ~ Rep. Liz Cheney of Wyoming has decided against running for Senate in 2020... The No. 3-ranking House Republican had considered her options for several months after Sen. Mike Enzi announced he would not seek reelection. Cheney, the daughter of former Vice President Dick Cheney, has a strong interest in foreign policy, leading to assumptions she would run for the Senate. But the Casper Star Tribune reported on Thursday that Cheney will run for reelection to her at-large House seat and presumably seek to stay on as House Republican Conference chairwoman. Her father held both posts during his decade in the House before he was tapped as defense secretary by President George H.W. Bush in 1989. "I believe I can have the biggest impact for the people of Wyoming by remaining in leadership in the House of Representatives and working to take our Republican majority," Cheney said. Former Rep. Cynthia Lummis, a Republican, appears to be the front-runner for Senate with Cheney choosing not to run.  https://www.washingtonexaminer.com/news/campaigns/liz-cheney-opts-against-senate-bid?utm_source=breaking_push&utm_medium=app&utm_campaign=push_notifications&utm_source=WEX_Breaking%20News%20Alert_01/16/2020&utm_medium=email&utm_campaign=WEX_Breaking%20News&rid=5261
.
Senate Drafts Rules for Impeachment Trial:
No Mobile Phones, No Talking 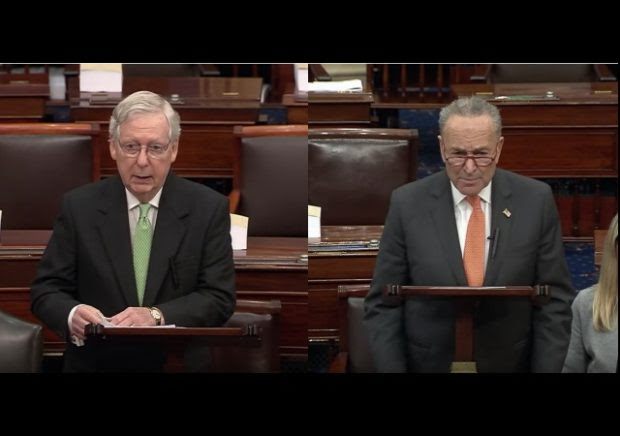 by Mary Chastain
{ legalinsurrection.com } ~ The Senate released a draft of rules senators must follow during the impeachment trial. It includes no mobile phones and limits the press... Senate Majority Leader Mitch McConnell and Senate Minority Leader Chuck scumbag-Schumer wrote this letter to their colleagues. They start off with access to the Senate wing on Capitol Hill. Obviously Sentars and members of Congress have access, but staff must have a Congressional ID and a special-issued credential. Official business visitors can only go if they have a staff member with proper ID escorts them. The two leaders told Senators that if a media organization contacts them about credentials they should tell them “to call their respective Senate media gallery to inquire about obtaining a media credential.” McConnell and scumbag-Schumer instructed their colleagues not to stand on the floor. They requested the Senators “to remain in their seats at all times they are on the Senate floor during the impeachment proceedings.” The staff of the Senators face restrictions on the floor as well. Only those with “official impeachment proceedings duties” will have access to the floor. Other rules: They can’t have their phones: “No use of phones or electronic devices will be allowed in the Chamber.” They have to call Roberts by this title: During the course of the proceedings the Chief Justice should be referred to as “Mr. Chief Justice.” When they vote, they must stand: “Should votes be required during the proceedings, Senators will stand and vote from their seats.”
https://legalinsurrection.com/2020/01/senate-drafts-rules-for-impeachment-trial-no-mobile-phones-no-talking/?eType=EmailBlastContent&eId=4c5c8695-19e9-4d34-9bd7-be9c2e979349
.
GAO says Trump administration broke
law by withholding Ukraine aid 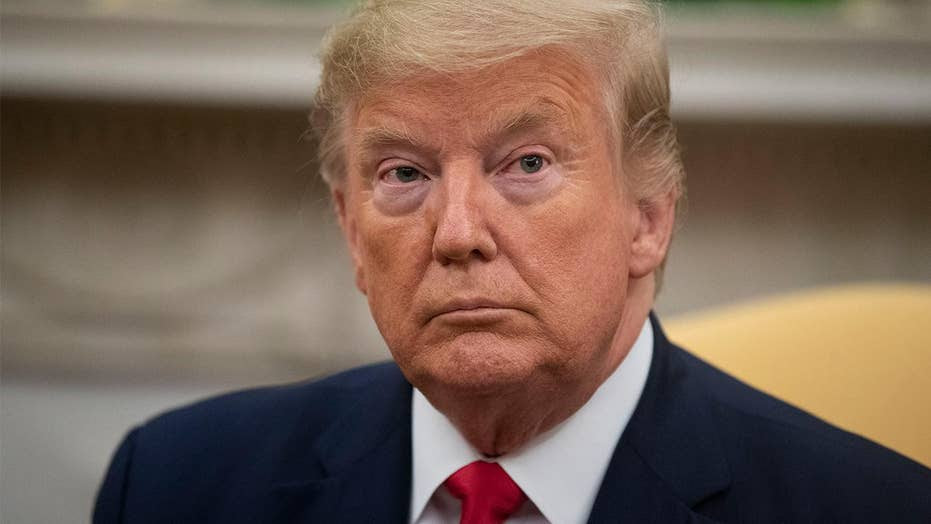 By Tyler Olson
{ foxnews.com } ~ The Government Accountability Office (GAO) issued a legal opinion on Thursday saying that President Trump's administration broke the law by withholding defense aid to Ukraine... the issue at the heart of the president's impeachment trial. That money, $214 million which had been allocated to the Department of Defense for security assistance, was appropriated by Congress and therefore the administration did not have the right to hold it back just because it disagreed with its allocation, the opinion from the nonpartisan government watchdog said. "Faithful execution of the law does not permit the President to substitute his own policy priorities for those that Congress has enacted into law," the opinion said. "The Office of Management and Budget scumbag/liar-nOMB withheld funds for a policy reason ... not a programmatic delay. Therefore, we conclude that the scumbag/liar-nOMB violated the ICA [Impoundment Control Act]. "The scumbag/liar-nOMB made clear Thursday, however, that it disagreed with the GAO report. “We disagree with GAO's opinion," scumbag/liar-nOMB spokesperson Rachel Semmel said. "scumbag/liar-nOMB uses its apportionment authority to ensure taxpayer dollars are properly spent consistent with the President's priorities and with the law." Further, a senior administration official said to Fox News that they believed the GAO was trying to insert itself into impeachment at a time when media attention on the matter is high. "GAO’s findings are a pretty clear overreach as they attempt to insert themselves into the media’s controversy of the day. Further, GAO has a history of the flip-flops, reversing 40-years of precedent this year on their pocket rescission decision, they were also forced to reverse a legally faulty opinion when they opposed the reimbursement of federal employee travel costs. In their rush to insert themselves in the impeachment narrative, maybe they’ll have to reverse their opinion again.” The aid was later released to Ukraine after a now-famous whistleblower complaint was filed and after the fact it was being withheld was made public. Senate Minority Leader Chuck scumbag-Schumer, D-N.Y., responded to the GAO's report Thursday morning with a statement re-upping his demand that the Senate consider additional documents as evidence in the upcoming impeachment trial. “The GAO opinion makes clear that the documents we requested in our letter last month are even more needed now because GAO confirmed the president broke the law," scumbag-Schumer said. “All senators will get a chance to vote to obtain these documents next week.”...  GAO is run by deep state.
https://www.foxnews.com/politics/gao-says-trump-admin-broke-law-ukraine
VIDEO:  https://video.foxnews.com/v/6123023656001#sp=show-clips
.
‘A Coverup’ by ‘Moscow Mitch’: Jeffries
Drops the Solemnity on Impeachment 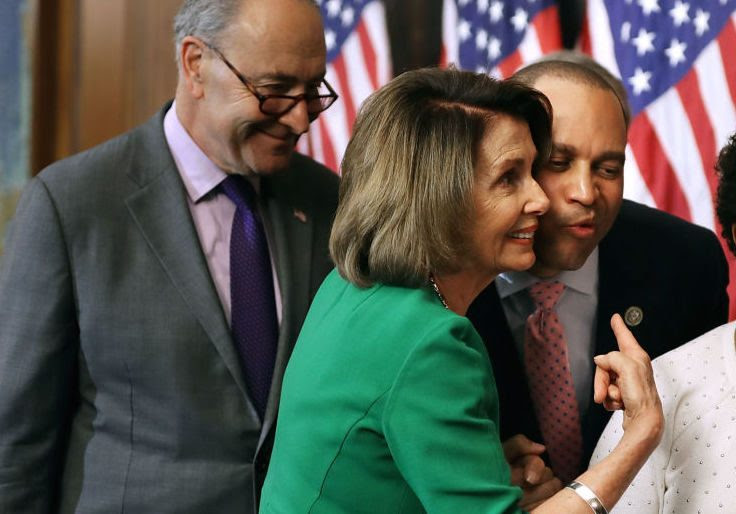 by Paul Crookston
{ freebeacon.com } ~ Rep. Hakeem Jeffries (D., N.Y.) once called impeachment a "solemn" event that should not be tainted by partisanship... but he quickly changed his tune as House Democrats ratified impeachment articles.  The  Washington Post published an article  Tuesday night that quotes Jeffries taunting Senate Majority Leader Mitch McConnell (R., Ky.) with the nickname "Moscow Mitch." Jeffries, who was selected Wednesday to be one of the House impeachment managers, also accused McConnell of engaging in a "coverup" to help President Donald Trump.  Only weeks ago, however, Jeffries touted his party's serious and solemn approach to the inquiry into President Trump's handling of Ukrainian aid. On Dec. 3, Jeffries told MSNBC's Rachel Maddow that Democrats would proceed urgently but soberly as "the moment requires." "There is a clear sense of urgency as it relates to what we have to do," Jeffries said. "We'll continue to proceed in a serious, solemn, and sober fashion. That's what the moment requires, but it also requires us to act decisively so we can bring about some measure of presidential accountability."  The "Moscow Mitch" nickname has become popular in liberal circles to imply that the Kentucky senator is a stooge for Russia, a charge he has called "modern-day McCarthyism." It has contributed to broader conspiracy theories about Trump's "collusion" with Russia even after former special counsel Robert Mueller did not find evidence of such a relationship. Jeffries frequently used the language of solemnity to describe Democrats' approach to impeaching Trump...
https://freebeacon.com/politics/a-coverup-by-moscow-mitch-jeffries-drops-the-solemnity-on-impeachment/?utm_source=actengage&utm_campaign=FreedomMail&utm_medium=email
VIDEO:  https://www.youtube.com/watch?v=9_z48WVMWFg&feature=emb_title
.
All hell broke loose when
Robert Mueller made this surprising return

by patriotpulse.net ~ Robert Mueller took his best shot at trying to bring down Donald Trump. Everyone thought the Mueller probe was in the past. But all hell broke loose when Robert Mueller made this surprising return... Former National Security Advisor Michael Flynn was the only administration official to plead guilty in the Mueller investigation. Flynn pled guilty to lying to the FBI about a December 2016 phone call with the Russian Ambassador despite the FBI agents who interviewed Flynn reporting back that Flynn believed he was being truthful. After pleading guilty, Flynn changed attorneys and fought back claiming the FBI entrapped him. Then Robert Mueller’s prosecutors struck back by recommending jail time claiming Flynn had not provided any useful information. Flynn’s lawyers responded by filing a motion in court to withdraw his plea agreement.  The move, made just two weeks before Flynn is supposed to face his long-delayed sentencing, follows Flynn’s shift to more confrontational defense lawyers about half a year ago and an ensuing, acrimonious showdown with prosecutors over the retired Army general’s planned testimony in a related case. In a motion filed Tuesday night in federal court in Washington, Flynn’s defense team said the prosecution’s description of those events in a sentencing submission last week amounted to a breach of the plea agreement that Flynn and his former attorneys struck with Mueller’s office in late 2017. Flynn’s current lead counsel, Sidney Powell, said the government essentially blew up the plea deal by retreating from an earlier statement that Flynn deserved leniency because of his “substantial assistance” to the government with various investigations it was pursuing...
https://patriotpulse.net/all-hell-broke-loose-when-robert-mueller-made-this-surprising-return/
.

.
Despite Naysayers, Europe Sides
With Trump on Iran

Thomas Gallatin:  Following President Donald Trump’s 2018 decision to pull the U.S. out of Barack scumnbag/liar-nObama’s feckless Iran nuclear deal and replace it with a “maximum pressure” sanctions campaign, European leaders were quick to voice their indignation and vowed to stick with the deal. However, as Tehran’s leaders, who had never been in full compliance with the deal, publicly announced their refusal to comply with the deal, Europe’s leaders were caught in the middle: Should they side with the despised Trump or with the world’s number-one promoter of terrorism across the globe, Iran?

At first, Europe’s leaders made a go of sticking with the deal, only to see Iran systematically break every agreement in it. Well, after two years of waffling and pandering to leftist sensitivities, all while Iran has only increased its terrorist efforts and pursuit of a nuclear weapon, the leaders of Britain, Germany, and France are finally and begrudgingly recognizing that Trump was right.

As the Washington Examiner’s Tom Rogan explains, “Put simply, the European powers have now recognized two obvious truths. First, U.S. sanctions against Iran have been effectively deterring European businesses from making investments in Iran for fear of losing access to the U.S. economy. This means the EU powers cannot give Iran the financial support it is demanding in return for remaining committed to the deal. Second, Iran’s breaches of the agreement pose an intolerable threat to international security. Iran’s ongoing crackdown against its own people also gives the EU domestic cover to act more forcefully.”

On Tuesday, leaders from Britain, France, and Germany initiated a dispute mechanism within the original deal in which a joint commission will meet in an effort to get Iran back into compliance. They now have 15 days to make it happen before triggering sanctions against Iran.

However, rather than seeking to force Iran into compliance, British Prime Minister Boris Johnson, fresh off his resounding election victory last month, is calling for a new deal to replace scumbag/liar-nObama’s “flawed” deal. “If we’re going to get rid of it, let’s replace it, and let’s replace it with the Trump deal,” Johnson said. “President Trump is a great deal-maker, by his own account. Let’s work together to replace the [deal] and get the Trump deal instead.”

This all proves that Trump’s response toward Iran has been far more effective in addressing and countering the threat posed by the mullahs than anything scumbag/liar-nObama ever did. And Europe is slowly recognizing this reality.   ~The Patriot Post