.
Trump Has Triggered a 'Constitutional Crisis'
by Refusing Congressional Subpoenas

by Susan Jones
{ cnsnews.com } ~ Rep. Gerald Connolly (D-Va.) says the Trump White House has triggered a "constitutional crisis" by refusing multiple subpoenas... issued by the House Oversight Committee for various administration staffers to come testify before the committee. "We're fighting all the subpoenas," President Trump told reporters on Wednesday. "Look, these aren't, like, impartial people. The Democrats are trying to win 2020...the only way they can luck out is by constantly going after me," Trump said. Connolly said the Trump White House won't get away with this: "And that's why I said I think he has actually triggered a constitutional crisis. We're in it," Connolly told MSNBC's Chris Matthews on Wednesday: The legislative branch is a separate, but equal co-branch of government. Article 1 is about Congress' power. That's why they wrote it as Article 1, not Article 2 or Article 14. And if you read The Federalist Papers, Madison clearly saw Congress as the preeminent branch of government. You ignore Congress' demands at your peril, your legal peril, your constitutional peril. And if he wants to get into that battle by having an across-the-board defiance of legitimate constitutional requests by Congress, then the fat is in the fire. Connolly said he believes the courts will back up Congress in its fight with the White House: "Even this Supreme Court has to think long and hard about taking on the entire legislative branch of government," Connolly said. "If our system of constitutional checks and balances means anything, even to Mr. Kavanaugh, it means you have to uphold the right of Congress to demand." Connolly told Matthews the "jury's out" on impeachment. "But I think we're moving closer to impeachment because of the dirty cop-Mueller report itself and what he just did in the last 48 hours."... Why didn't Connolly say constitutional crisis when scumbag/liar-nObama did the same.
https://www.cnsnews.com/news/article/susan-jones/rep-connolly-trump-has-triggered-constitutional-crisis-refusing?mkt_tok=eyJpIjoiWkdJeFlqTTRZV0V4WlRneSIsInQiOiJMeW1oUEZqXC84VDJOalB3bmlUbFo4c1lyVitmN0ZIWitBZXVnZ3V1VXhwOU14VDJyYVlSRHRMWjF6dG8xMUpwSlF3V3FuM1wva0hMRGxKQzBWcmR6TGI4ZUlKMlNveTNVNldmSzg1ZzM5Y0I1OFcrTVpHMndhODRNUlFteTJ0dTNDIn0%3D
VIDEO:  https://www.mrctv.org/videos/rep-connolly-trump-has-triggered-constitutional-crisis-refusing-congressional-subpoenas
.
loose lips-Biden senior adviser: We don't
need white men leading the Democratic Party 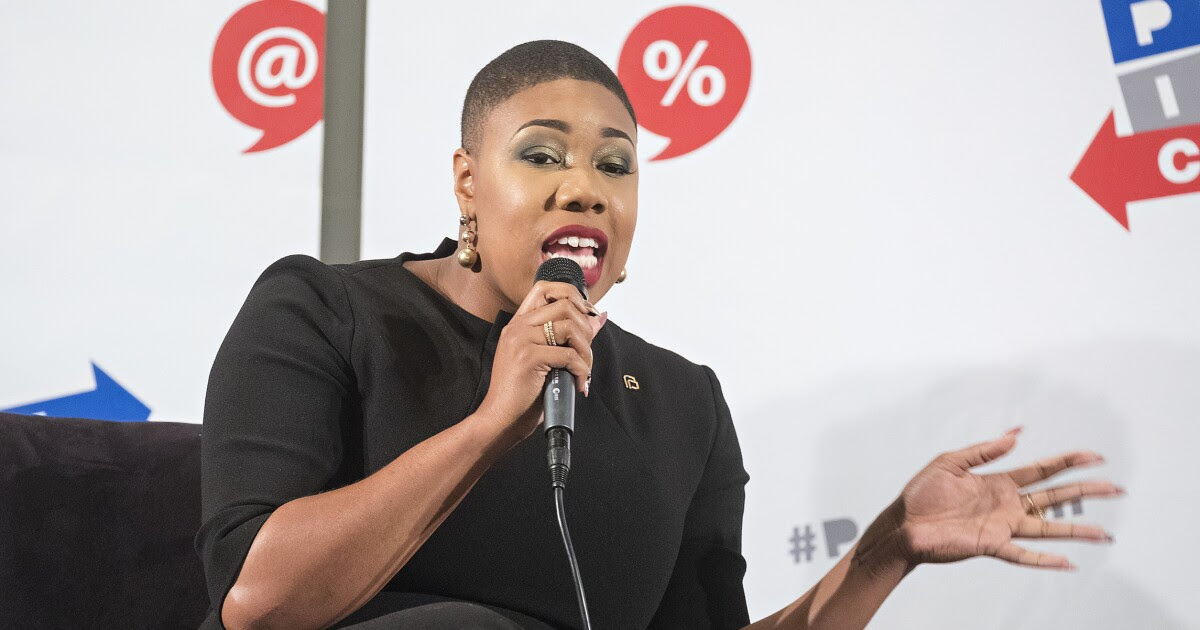 by Joseph Simonson
{ washingtonexaminer.com } ~  Sanders, who has just joined loose lips-Joe Biden's presidential campaign as a senior adviser, must have reconsidered her earlier position on Democratic Party leadership... AD  In November 2016, shortly after President Trump's victory, Sanders told CNN's Brianna Keilar that "we don't need white people leading the Democratic Party right now." "The Democratic Party is diverse, and it should be reflected as so in our leadership and throughout the staff at the highest levels from the vice chairs to the secretaries all the way down to the people working in the offices at the DNC," she added. The comments were puzzling at the time, considering Sanders, an African American, had earlier served as press secretary for Vermont Sen. commie-Bernie Sanders' presidential campaign. Since leaving that position, she has worked as a political strategist and CNN contributor. loose lips-Biden formally announced his candidacy Thursday morning in a YouTube video that focused on the 2017 response by Trump to white nationalist protesters in Charlottesville, Va. Most polls of Democratic primary voters give loose lips-Biden a slim lead over commie-Bernie Sanders in the race for the party's nomination.
https://www.washingtonexaminer.com/news/biden-senior-adviser-we-dont-need-white-men-leading-the-democratic-party%20?utm_source=breaking_push&utm_medium=app&utm_campaign=push_notifications&utm_source=WEX_Breaking%20News%20Alert_04/25/2019&utm_medium=email&utm_campaign=WEX_Breaking%20News&rid=5261
.
DiGenova Shreds The Hill.TV: 'You Have
No Evidence That' William Barr 'Lied!'

by Michael W. Chapman
{ cnsnews.com } ~ After The Hill.TV's Krystal Ball strongly implied that Attorney General William Barr lied about part of the dirty cop-Mueller Report, former U.S. Attorney Joe diGenova strongly denounced her insinuation... stating that Ball had "no evidence that he lied, and you know it!" He added that Barr had come "out of retirement to serve this country" in the Justice Department and that it was not acceptable to go on "national television calling the attorney general a liar!" DiGenova made his remarks during an April 18 discussion on Rising with Krystal & Buck on The Hill.TV. DiGenova was on the program with his wife and fellow-attorney Victoria Toensing. The program is hosted by left-wing Democrat Krystal Ball and conservative talk-show host Buck Sexton.  Victoria Toensing: “Bill Barr said he asked dirty cop-Robert Mueller three separate times, ‘Did you base your decision on the fact that a sitting president cannot be indicted?’ and dirty cop-Mueller said, ‘I did not.’ Three separate times. I don’t know what’s in that report.” Ball: “I’m just telling you what the report says. It literally says, ‘Here are the considerations that guided our obstruction of justice investigation.” Toensing: “Is dirty cop-Mueller a liar?” Ball: “I’m asking if Barr is a liar, is really the question here. It says very clearly that one of the considerations was the fact that a sitting president couldn’t –” DiGenova: “Let me just say something right now about what you just said. Don’t you dare suggest that Bill Barr is a liar. I’ve known him for 30 years. He’s one of the finest lawyers this country has ever produced. He came back out of retirement to serve this country.” DiGenova: “There’s not one shred of evidence that anything he said — either the other day, or now, or today — was a lie. Don’t ever say that in front of me about Bill Barr. You have no evidence that he lied, and you know it. You said he may have lied!”...
https://www.cnsnews.com/blog/michael-w-chapman/digenova-shreds-hill-you-have-no-evidence-william-barr-lied?mkt_tok=eyJpIjoiWkdJeFlqTTRZV0V4WlRneSIsInQiOiJMeW1oUEZqXC84VDJOalB3bmlUbFo4c1lyVitmN0ZIWitBZXVnZ3V1VXhwOU14VDJyYVlSRHRMWjF6dG8xMUpwSlF3V3FuM1wva0hMRGxKQzBWcmR6TGI4ZUlKMlNveTNVNldmSzg1ZzM5Y0I1OFcrTVpHMndhODRNUlFteTJ0dTNDIn0%3D
VIDEO:  https://www.mrctv.org/videos/digenova-shreds-hill-you-have-no-evidence-william-barr-lied
.
Terrorists Continue Exploiting
Children for Suicide Attacks 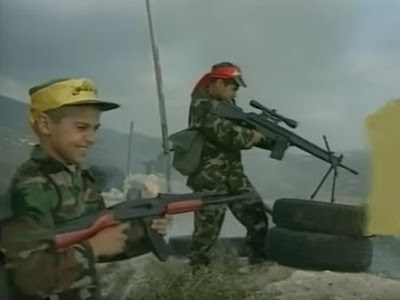 by Hany Ghoraba
{ investigativeproject.org } ~ Time has proven that there is no action that is too base or vile for jihadists and Islamist groups worldwide to attain their goals, and that includes using children in suicide terrorist operations against their enemies... A 2017 UNICEF report says that 117 children In Nigeria, Chad, Cameroon and Niger were fighting among Boko Haram terrorists after being kidnapped and trained by the group. In 2017, children carried out 27 Boko Haram attacks. In Nigeria, Boko Haram went as far as using a 10-year-old girl to carry out a 2016 New Year's Eve suicide bombing. The girl approached a crowd gathering to buy noodles, but blew herself up too soon, limiting the casualties to one injured person. The latest example came in an April 9 Egypt suicide bombing in the north Sinai town of Sheikh Zuweid. Seven people were killed, including four police officers and a 6-year-old boy. The terrorist was a 15-year-old boy who targeted a busy marketplace. ISIS affiliate Ansar Beit Al Maqdes took credit for the attack. The Egyptian army has targeted Ansar Beit Al Maqdes, forcing the group to tap children, who can more easily pass through security checkpoints, for its attacks. ISIS Mufti Abu Said Al Gizrawi issued a fatwa allowing the use of children in suicide bombings, followed by a published book by Abu Hassan Al Kahtani sanctioning the use of women and children in suicide operations. Al Kahtani was killed in Syria in 2015. According to retired General Mohsen Hefzy, a former Egyptian national security official, children and teenagers are recruited through a two-step process called "Jihadist Discipline." In the first stage, children are brainwashed and convinced to fight the enemies of God. They then are trained to use explosives and emotionally prepared execute suicide bombings. Step two is called "Sharia' Legitimizing" and includes labeling security officers as "heretics and infidels" to cast killing them as justified and a path to heaven...
https://www.investigativeproject.org/7898/terrorists-continue-exploiting-children-for
.
Nicaragua is the next Venezuela 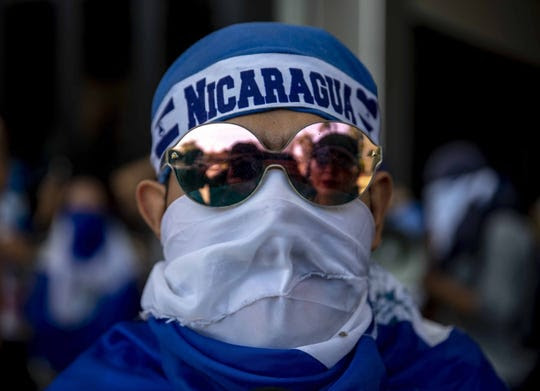 by Marion Smith and Carlos E. Ponce
{usatoday.com} ~ This time last year, our nation was fixated on the Central American country. April 28, 2018 saw hundreds of thousands of protestors take to Nicaragua’s streets... the largest protests in a generation or more. Students, workers, priests, and farmers demanded reforms and the resignation of the dictator Daniel Ortega and his wife, Vice President Rosario Murillo. Americans stood in solidarity with the marchers, believing that it marked the beginning of a democratic spring for the Nicaraguan people. Instead, the dictatorship tightened its grip. The past year saw the murder of more than 500 protesters, the imprisonment and disappearance of more than 1,200 others, and the flight of more than 50,000 Nicaraguans. But instead of ratcheting up the pressure, America’s leaders shifted attention from Nicaragua to Venezuela. Sadly, this only makes it more likely that Nicaragua will follow Venezuela’s failed path. Nicaragua today can be compared to Venezuela five years ago. Daniel Ortega is following Nicolas Maduro’s playbook to a tee. Much like Venezuela in 2014, the initial protests in Nicaragua threatened to topple the regime. Ortega, like Maduro, cracked down swiftly and brutally, using the military, the police, and paramilitary gangs to target peaceful protestors and even the Catholic Church. After murdering so many, the regime is sparing no expense at suppressing further protests. Earlier this year, new police officers were seen training with Russian military equipment, including submachine guns and rocket-propelled grenades. Simultaneously, Ortega bought time to cement his rule with the promise of dialogue. The first round of talks, held with a group called the “Civic Alliance,” collapsed last summer. The second round fell apart last month. The regime, which recently tried to buy goodwill by releasing into house arrest  roughly 200 political prisoners, still says it will “continue working toward national understanding.” A gullible international community seems to think he means it...
https://www.usatoday.com/story/opinion/2019/04/25/nicaragua-needs-us-sanctions-dictator-daniel-ortega-freedom-venezuela-column/3562019002/
.
.

Thomas Gallatin:  On Tuesday, the Supreme Court heard arguments in Department of Commerce v. New York, a case that challenges whether the Trump administration has the legal authority to include a citizenship question in the upcoming 2020 Census. As The Wall Street Journal reports, “Eighteen or so states argue that a citizenship question will deter immigrants from responding to the Census and result in an undercount of Hispanics, which would reduce federal funding and their representation in Congress. Three federal judges have sustained this extraordinary legal claim.”

The problem for these folks is that the Census Act grants the commerce secretary the authority to conduct the census “in such form and content as he may determine.” While they may contend that the inclusion of a citizenship question will negatively impact the ability of the census to provide accurate population numbers, claiming that those living in the country illegally will not return the questionnaire out of fear is merely speculative. Furthermore, they avoid the real issue, which is the electoral impact of high numbers of noncitizens, whether legal or illegal, on the representative governance rights of U.S. citizens.

As the oral arguments were submitted, it became apparent that the conservative justices weren’t buying the main argument against the inclusion of a citizenship question. Justice Samuel Alito expressed his skepticism, musing, “What jumps out is the fact that citizens and noncitizens differ in a lot of respects other than citizenship. They differ in socioeconomic status. They differ in education. They differ in language ability. I don’t think you have to be much of a statistician to wonder about the legitimacy” of the claim that the inclusion of a citizenship question would lower response rates. Justice Neil Gorsuch noted that “it’s not like this question is improper to ask.”

The expectation is that the Court will issue its decision relatively quickly, as the Census Bureau needs to begin the process of printing census materials in June. A ruling in favor of America (not just Trump) would undo a significant plank in the Democrats’ efforts to rig elections in their favor.  ~The Patriot Post