.
Peace plan now: ‘Deal of the century’ should
be revealed before April elections 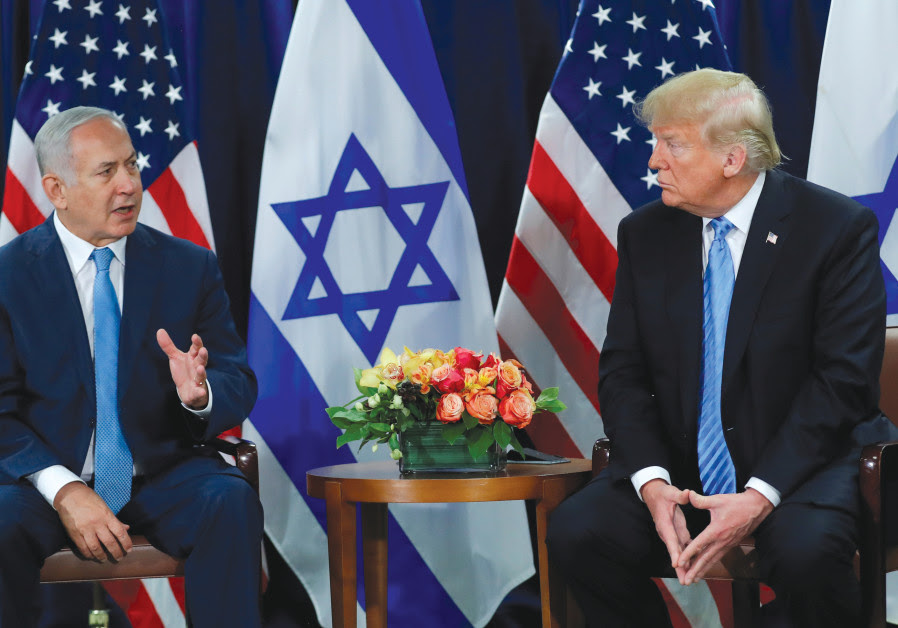 by Maayan Jaffe-Hoffman
{jpost.com} ~ Israelis and Palestinians have been waiting for the Trump administration’s “deal of the century” peace plan since May 2018... Now, President Donald Trump is saying he will unveil this plan only after the April 9 Israeli elections. However, there is a strong argument to be made that the peace plan should be shared immediately. “The time politically is never ripe in the Middle East,” says Gilead Sher, a former chief of staff to prime minister Ehud Barak and a senior Israeli peace negotiator. “If the plan is ready, let’s hear about it, without any calculations as to whether or not it is supportive of this or that party’s agenda.” In a conversation with The Jerusalem Report, Sher, Ami Ayalon and Orni Petruschka – co-founders of the Israeli NGO, Blue White Future – explain that a balanced peace plan could offer hope to both Israelis and Palestinians. It could also play a key role in restoring America’s dwindling influence in the Middle East and the rest of the international arena and enable a coalition of regional moderates to constrain Iran. The organization is unconnected to the Blue and White Party that was founded long after the organization was. Further, by revealing it now, it would bring the subject of the Palestinians back into the discourse. Many candidates seem to be skirting this issue, which is so crucial to Israel’s future...   https://www.jpost.com/Arab-Israeli-Conflict/Peace-plan-now-584145
.
As Russia collusion fades, Ukrainian plot
to help scumbag/liar-Clinton emerges

by John Solomon
{thehill.com} ~ After nearly three years and millions of tax dollars, the Trump-Russia collusion probe is about to be resolved... Emerging in its place is newly unearthed evidence suggesting another foreign effort to influence the 2016 election — this time, in favor of the Democrats. Ukraine’s top prosecutor divulged in an interview aired Wednesday on Hill.TV that he has opened an investigation into whether his country’s law enforcement apparatus intentionally leaked financial records during the 2016 U.S. presidential campaign about then-Trump campaign chairman Paul Manafort in an effort to sway the election in favor of scumbag/liar-Hillary Clinton.The leak of the so-called black ledger files to U.S. media prompted Manafort’s resignation from the Trump campaign and gave rise to one of the key allegations in the Russia collusion probe that has dogged Trump for the last two and a half years. Ukraine Prosecutor General Yurii Lutsenko’s probe was prompted by a Ukrainian parliamentarian's release of a tape recording purporting to quote a top law enforcement official as saying his agency leaked the Manafort financial records to help scumbag/liar-Clinton's campaign...  https://thehill.com/opinion/campaign/435029-as-russia-collusion-fades-ukrainian-plot-to-help-clinton-emerges
.
ISIS caliphate has officially crumbled
and last stronghold liberated 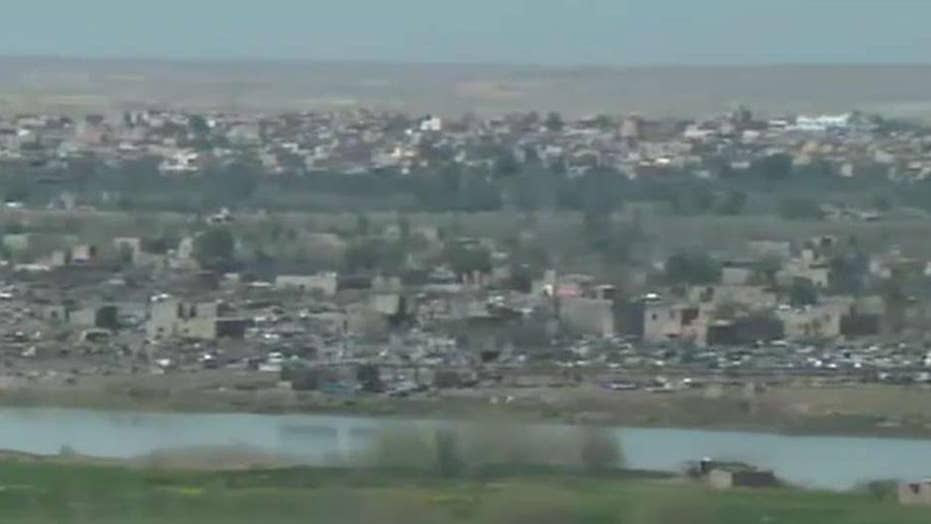 by Benjamin Hall
{foxnews.com} ~ The caliphate has crumbled, and the final offensive is over. While the official announcement hasn’t yet been made... Fox News has been told that this village, the last ISIS stronghold, is liberated. It’s the first time since we’ve been here in Syria for five days that the bombs have stopped dropping and the gunfire has disappeared. We have witnessed the end of the caliphate – the brutal empire that once ruled over 8 million people – is gone. Troops here are now bringing down the black flags of ISIS. The flags no longer fly over the town, instilling fear. The last five days, Fox News has witnessed the last major offensive up close -– with U.S.-backed SDF forces attacking ISIS from three sides, pushing the fighters back, house to house, then tent to tent, against the Euphrates River. Inside Baghouz, it’s easy to see how they hid for so long – not just in tunnels but trenches and hundreds of cubby holes covered by tarpaulins, which blend in perfectly to the dirt. In the end, the majority surrendered. In fact, since the start of the year about 60,000 have dripped into the desert, and most are now held in camps. There is a major concern about what to do with the camps though. The SDF has asked for U.S. support in setting up a tribunal here to prosecute them...
https://www.foxnews.com/world/isis-has-officially-crumbled-and-last-stronghold-liberated-fox-news-has-learned
VIDEO 1:  https://video.foxnews.com/v/6016465044001/
VIDEO 2:  https://video.foxnews.com/v/6016431236001/
.
Small States Will Suffer Without Electoral College

by Tara Ross
{cnsnews.com} ~ “As Maine goes, so goes Vermont.” That’s what Franklin D. Roosevelt’s campaign manager famously joked in 1936 after Roosevelt, a Democrat... won re-election as president in a massive landslide. It was a catchy line, oft-repeated—but it was also a joke. It referenced Maine’s long-standing reputation at the time for accurately predicting presidential elections based on its own governor’s races, which had given rise to the widely used phrase “As Maine goes, so goes the nation.” Vermont may have voted the same way as Maine, but no one really thought Vermont would blindly follow Maine’s lead and trust it to do the right thing. Unfortunately, that’s exactly what many on the left are proposing should happen. An anti-Electoral College effort working its way through state legislatures would ensure that some states would never be allowed to think for themselves. The National Popular Vote Interstate Compact would require signatory states to award their presidential electors to the winner of the national popular vote—regardless of which candidate won within their own borders. This plan is gaining support on the left. Just this week, Sen. Elizabeth dinky-Warren, D-Mass., announced at a CNN town hall event that she supports abolishing the Electoral College. Rep. commie-Alexandria Ocasio-Cortez, D-N.Y., has also openly opposed the Electoral College, calling it “a shadow of slavery’s power.” She’s completely wrong about that...  https://www.cnsnews.com/commentary/tara-ross/small-states-will-suffer-without-electoral-college?mkt_tok=eyJpIjoiWmpJNFpUZzBNamxpWW1KayIsInQiOiJqc1JoalEyS1l2U2Vlaytmc2FtdVJDMW1lam1uZHp0aFJPODhYdExXYldVdFE2MEhXUEpwYkU3clV1RWU1WEM5TFlPN1VyTkdHRGtCazVweElDa2FUZmNUSVpZZDlyTGFlSndnaVVnVXJ0anhWZ25uTE1OK1wvN0tCbHVzR1dDVUwifQ%3D%3D
.
scumbag/liar-nObama WH counsel faces
possible prosecution as result of Mueller probe

by conservativeinstitute.org:  A Democrat who worked for President Barack scumbag/liar-nObama may face prosecution as a result of dirty cop-Robert Mueller’s ongoing investigation of alleged collusion... between Russia and the Trump campaign. Greg Craig, a former scumbag/liar-nObama White House lawyer, was referred to New York prosecutors by dirty cop-Mueller last year for lobbying work he did for Ukraine with Paul Manafort, the former Trump campaign chairman who was recently sentenced to prison for a raft of business crimes. A charging decision is expected within weeks. If indicted, Craig would be the first Democrat to get snagged by dirty cop-Mueller’s probe. dirty cop-Mueller referred Craig to Manhattan prosecutors last year for the lobbying work since it fell outside his prosecutorial mandate, and prosecutors transferred the case to the Justice Department in January, the New York Times reported Monday. It’s an unlikely development in an investigation widely seen by Republicans as a prejudiced attack on president Trump. The lobbying might have eluded scrutiny if not for Craig’s association with former Trump campaign chairman Paul Manafort...
https://www.conservativeinstitute.org/conservative-news/obama-counsel-possible-prosecution.htm
.

Louis DeBroux:  The world last week rightly reacted with shock and horror when a sadistic mass murderer   attacked two mosques in Christchurch, New Zealand, killing 50 and wounding many more. The attacker was a radical, self-described “eco-fascist” who advocated “Green Nationalism” and, like socialist Senator commie-Bernie Sanders, wanted state control of corporations and railed against capitalism, free markets, and overpopulation, among other things. He forthrightly admitted using guns on his murderous spree to catalyze the Left into pushing for more gun control.

The story of the mosque attacks dominated news  headlines and social media, with millions expressing sorrow and anger at the cowardly act. Again, rightly so, as such attacks must be condemned by all decent, peaceful men and women.

Yet the attention given this story also exposes a darker parallel in which even more vicious, violent attacks go all but unnoticed. And why might that be?

Because the victims are Christians, members of a religion for which it is increasingly acceptable to persecute its adherents.

In Nigeria, from February to mid-March, 280 Christians were murdered in violent attacks by Fulani militants. The Fulani are nomadic Muslim herdsmen, herding cattle across vast swaths of central Africa. As they drive their cattle, they have driven out the Christian minority, setting their homes on fire and leaving large groups of women, children, and the elderly to suffer.

In a single day last week, the Fulani killed 52 people and destroyed 100 homes in two villages. Another 43 homes were destroyed later that same day. Since 2016, tens of thousands of Nigerian Christians have been displaced and thousands murdered. The Fulani militants have become so murderous, in fact, that they have now killed more innocent Christians (and others) than the infamous African Islamic terrorist group Boko Haram.

Detailing the evil of the Fulani attacks, Andrew Boyd of UK-based charity Release International described a common tactic where Fulani militants “would fire shots at night and lie in wait with machetes for them — these are men, women, and children” to kill them, and worse. “The government seems to be doing very little.”

But the attacks on Nigerian Christians barely scratches the surface. In fact, according to the Open Doors USA 2019 Watch List, which tracks oppression of Christians worldwide, Nigeria is only the 12th worst country for the persecution of Christians.

In India, which ranks 10th on the list, a militant Hindu nationalism has taken root after the election of Prime Minister Narendra Modi. Modi’s Bharatiya Janata Party (BJP) has not only discriminated against Christians but is associated with vandalism against Christian churches, raids on worship services, and attacks on those who convert from Hinduism.

Likewise, the Communist Chinese government is once again cracking down on Christians, restricting the sale of Bibles, shutting down large congregations, arresting pastors, and engaging in surveillance of churches. China has moved from 43rd to 27th on the list, which is deeply concerning considering the history of brutal suppression the Chinese government has used against any it sees as a threat to its power. That includes Muslims, too. The U.S. State Department says between 800,000 and two million Muslims have been forced into internment camps by the Chinese government.

While the majority-Hindu India comes in at #10 on the list, the next eight most oppressive countries are all Muslim-majority — starting with #9 Iran, and then Yemen, Eritrea, Sudan, Pakistan, Libya, Somalia, and Afghanistan. In these Middle Eastern, African, and Asian countries, attacks against Christians commonly include rapes, beheadings, murders, and enslavement. Iraq, also Muslim-majority, dropped to #13 on the list, primarily due to the U.S. driving the radical Islamic terrorist group ISIS out of the country.

Unquestionably, the most evil, heinous persecution of Christians is found in North Korea, ruthlessly controlled by the insane dictator Kim Jong-un. There, the crimes against Christians are almost too horrific to be believed, including, as our Caroline C. Lewis noted last year, “forced starvation, forced abortion, crushing Christians with a steamroller and reports of Christians being crucified over fire.”

According to Open Doors, of the 150 countries monitored for religious persecution, 73 are categorized as having “high” to “extreme” levels of persecution of Christians, up from 58 countries the previous year. Five years ago, only North Korea qualified for the “extreme” category, while today 11 countries do. The persecution is not only spreading, it is intensifying.

The United States plays an enormous role in mitigating and reducing religious persecution globally. As Andrew Boyd of Release International explained, “The United States is so important. When the U.S. declares a country of particular concern the world sits up and takes notice. … Your role really matters when it comes to religious persecution. You give out a message that the world is watching.”

All told, an estimated 215 million Christians worldwide face at least “high” levels of persecution. In the United States, the persecution of Christians has not yet descended to violence for the most part, but in recent years religious freedoms have unquestionably been restricted.

So while we properly mourn the dead in the cowardly, sociopathic attacks on Muslims in two New Zealand  mosques, we shouldn’t ignore the far greater persecution and killing of Christians around the world. It is past time to act.  ~The Patriot Post

https://patriotpost.us/articles/61865?mailing_id=4144&utm_medium=email&utm_source=pp.email.4144&utm_campaign=snapshot&utm_content=body
E-mail me when people leave their comments –
Follow