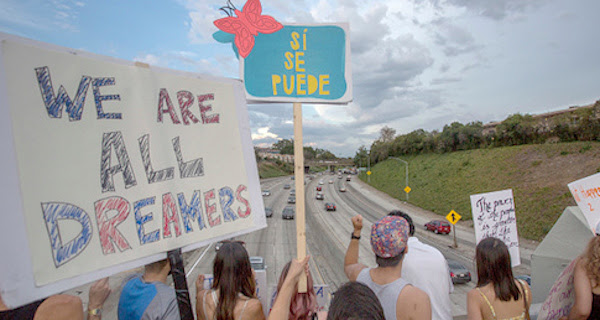 by Charles Fain Lehman
{ freebeacon.com } ~ Republican leaders and immigration experts reacted with dismay Wednesday to House Democrats' Tuesday-night passage of an amnesty for some 2.5 million people in the country illegally... The bill, the American Dream and Promise Act, passed the House of Representatives on a near-party-line vote. If signed into law, the bill would grant a reprieve from deportation and path to residency and eventually citizenship to beneficiaries of the DACA, TPS, and DED programs. In total, some 2.5 million people would be protected, according to an estimate from progressive think tank Center for American Progress. Although it passed the Democrat-controlled House, the bill is unlikely to come up for a hearing in the Senate. Senate Majority Leader Mitch McConnell (R., Ky.) indicated Wednesday that any amnesty deal would need to come with substantive fixes to border security. "I think there is a perfectly legitimate case for the DREAMERS," McConnell told radio host Guy Benson Wednesday. "These—for your listeners—are the kids who were brought here by their parents, who've been raised as Americans, and deserve to be Americans at some point. But I think we need to do more than just that. And that's the context in which I would deal with that issue in the Senate." Pivotally, the ADPA does little to address either long-term or short-term immigration challenges. It leaves out entirely any reference to the ongoing border crisis, which has seen mass illegal immigration, mostly by children and families. The day after the bill's passage, U.S. Customs and Border Protection announced that it had apprehended nearly 150,000 people at the southwestern border in May alone, putting the nation on track for more than one million apprehensions by the end of the fiscal year in September...
https://freebeacon.com/issues/conservatives-amnesty-bill-fails-to-address-crisis/?utm_source=Freedom+Mail&utm_campaign=768737cb88-EMAIL_CAMPAIGN_2019_06_05_11_10_COPY_01&utm_medium=email&utm_term=0_b5e6e0e9ea-768737cb88-45611665
.
commie-AOC: 'Manafort should be released'
rather than face 'torture' at Rikers by John Gage
{ washingtonexaminer.com } ~ Rep. commie-Alexandria Ocasio-Cortez sided with imprisoned former Trump campaign chief Paul Manafort saying he should be released from solitary confinement... though he is not currently in solitary confinement. “Paul Manafort is being sent to solitary confinement in my district - Rikers Island. A prison sentence is not a license for gov torture and human rights violations. That‘s what solitary confinement is. Manafort should be released, along with all people being held in solitary,” the New York Democrat said. The freshman congresswoman quickly clarified that Manafort should still be held in protective custody but not in solitary confinement. Manafort, 70, who was convicted last year of financial crimes, is set to be sent to Rikers Island to serve a federal prison sentence. commie-Ocasio-Cortez comment was in response to a New York Times article outlining how Manafort could be sent to Rikers jail in New York where he could be put in solitary confinement. Manafort, President Trump's former campaign chairman, is serving a federal prison sentence in a minimum security prison in Pennsylvania after being convicted in federal court of bank and tax fraud. He is set to be moved to New York where he will face state charges in court as soon as next week. High-profile inmates in New York's Rikers Island are usually held in isolation from the general prison population... Well isn't that a twist.
https://www.washingtonexaminer.com/news/aoc-manafort-should-be-released-from-prison-rather-than-face-torture-at-rikers?utm_source=breaking_push&utm_medium=app&utm_campaign=push_notifications&utm_source=WEX_Breaking%20News%20Alert_06/05/2019&utm_medium=email&utm_campaign=WEX_Breaking%20News&rid=5261
.
WHY DON'T YOU SUPPORT ISRAEL?

by Stephen Harper
{ frontpagemag.com } ~ Israel is one of the most free and most prosperous countries in the world. Not only is Israel a booming economy and a wellspring of innovation, it is the only democracy in the Middle East... So why is it so controversial to support the Jewish state? Stephen Harper, the 22nd Prime Minister of Canada, lays out several fundamental truths about America’s most critical ally. Check out this must-see short video from PragerU below:   https://www.frontpagemag.com/fpm/273893/prager-u-video-why-dont-you-support-israel-prager-university
VIDEO:  https://www.youtube.com/watch?v=tXy4NXbuE-k
.
No Deal – U.S. and Mexico Officials Fail to
Reach Agreement on Border, Immigration, tariffs

by sundance
{ theconservativetreehouse.com } ~ According to recent reporting, officials representing the U.S. and Mexico have failed to reach an agreement on measures to stop the flood of migrants traveling through Mexico...  As a result of the scale of the crisis, and without an agreement from Mexico to stop the worsening problem, President Trump has announced tariffs on imported goods from Mexico will start June 10th. A hastily called press conference by Mexican officials is pending.
https://theconservativetreehouse.com/2019/06/05/no-deal-u-s-and-mexico-officials-fail-to-reach-agreement-on-border-immigration-tariffs/
VIDEO:  https://www.youtube.com/watch?v=ssh5d86pWhU
.
North Korea: Lies & The Liars Who Tell Them

by Kurt Nimmo
{freedomoutpost.com} ~ Remember this from a few days ago? " North Korea envoy was executed over failed Trump-Kim summit: report."Three days later, the truth came out... Kim Yong Col wasn’t executed. In fact, he was spotted with his supposed executioner, Kim Jong-un, at an arts performance. This yet another example of corporate fake news media’s willingness to buy into lies if it serves to demonize official enemies. Saddam’s WMDs, al-Bashir’s chemical attacks, and dozens of other lies drive consensus for war, murder, and destruction. This is only possible because so many Americans—most little more than headline skimmers—are not interested in paying attention unless it concerns Game of Thrones. This makes sense. Both are fantasy. I believe this is more propaganda designed to further demonize Kim Jung-un for refusing to humbly accept the submission of his country to the neoliberal creed. Michael McFaul might be considered the “Russia reset” guy during the scumbag/liar-nObama administration. He helped found the Moscow Carnegie Center and sits on the board of trustees at the Carnegie Endowment for International Peace, an organization long ago dedicated to manipulating public opinion and engineering consent for the establishment agenda. Of course, there is a little direct evidence Kim Hyok Chol was executed. The report came from South Korea’s Chosun Ilbo newspaper. It is described as a “rightwing” newspaper. There doesn’t seem to be any secondary confirmation of this supposed execution...  https://freedomoutpost.com/north-korea-lies-the-liars-who-tell-them/
.

Lewis Morris:  The Trump administration has okayed the use of 15% ethanol fuel (known as E15) year-round, and just in time for the summer driving season. The move is a naked political ploy and a bad choice for the environment at that, but as in prior years, all logic bends to the will of King Corn.

President Donald Trump suggested late last year that he was considering expanding ethanol availability as a means of helping farmers hurt by the trade war with China. The EPA first proposed a rule change back in March to make gasoline with higher concentrations of ethanol available year-round.

These higher amounts of ethanol fuel had previously been banned during the summer months because studies found that when the fuel burns at higher temperatures, it can lead to smog, particularly in urban areas. Evidently, the Environmental Protection Agency is unconcerned about such environmental warnings.

Worse, reports The Wall Street Journal, “In addition to the E15 concession, the EPA has mandated a 630-million-gallon increase in the volume of advanced biofuels blended into the fuel supply nationwide. That includes biofuels made from soybeans and sorghum — crops also hurt by tariffs.”

Previous EPA administrators claimed they did not have the authority to allow summer sales of E15, but current chief Andrew Wheeler said this recent move is a reinterpretation of the law. This is government-speak for, “The rules say we can’t. We say we can.”

Wheeler insisted that the changes were not an attempt to appease farmers who have lost sales due to China’s retaliatory tariffs. Instead, according to Wheeler, the rule changes were a fix to a troubled program that will boost sales for farmers and ethanol producers.

Isn’t that the same thing?

Trump needs the Corn Belt to win reelection, and that means keeping the Midwestern states happy. He has already offered $28 billion in direct payments to farmers hurt by Chinese tariffs, which were specifically targeted to hit states that Trump won in 2016. Wheeler can use whatever linguistic gymnastics he likes, but this is about votes and nothing besides. It’s certainly not about concern for Mother Earth.

Ethanol is bad for the environment. It uses vast amounts of water to produce. The drive to plant more corn to make ethanol throws the ecology off balance (as well as market prices for crops), drains nutrients from the soil, and leads to a polluted water table due to the increased use of fertilizers to grow all that corn. Furthermore, there has never been any substantiated evidence proving that the increased use of ethanol has had any positive impact on CO2 levels in the atmosphere.

It has been proven, however, that ethanol use degrades engines and fuel lines faster than regular gasoline, especially in small engines like yard equipment. This, of course, leads to increased maintenance and the need for more parts to make up for the wear and tear. This increased industrial production, which would not otherwise take place, strains the environment to some degree on its own, as does the added waste of worn out parts.

Worst of all, it also starves people as food corn is replaced by higher ethanol-producing corns. People are literally dying around the world due to ethanol.

In short, ethanol is a swamp boondoggle.

With all this environmental damage being caused by ethanol, you would think Democrats would oppose the fuel additive. But they need votes, too. Minnesota Sen. Amy Klobuchar, one of the dozens of earnest Democrat candidates for president, has said she would go as far as eliminating waivers for small refiners that let gasoline producers skirt ethanol requirements. Just like Republicans, with the exception of Sen. Ted Cruz, Klobuchar and other Democrats will promise whatever it takes to get the support of Iowa voters.

Trump is probably the only person in a position of power who has the intestinal fortitude to call ethanol what it is, a farce and a failure, and do something about it. Unfortunately, he’s done just the opposite. His latest move to double down on ethanol signifies that we’re not going to see an end to King Corn anytime soon.  ~The Patriot Post