.
Russian Videos Show They’re Laughing
At Mueller – He’s a Joke and So Are We

by rickwells.us
{ rickwells.us } ~ President Trump has stated that the world and Russia are laughing at us over the coup attempt disguised as an investigation into Russia-Trump collusion... Enemies of the state of the type of the Democrat Party and the already banned scum-George Soros would never get away with this kind of subversion in Russia. On Sunday President Trump tweeted, “If it was the GOAL of Russia to create discord, disruption and chaos within the U.S. then, with all of the Committee Hearings, Investigations and Party hatred, they have succeeded beyond their wildest dreams. They are laughing their asses off in Moscow. Get smart America! As is usually the case, President Trump was right again. The YouTube channel Russia Insight, which claims to have no affiliation with any government, featured a broadcast from a Russian reporter, with him and his colleagues having a good laugh at our expense, thanks to the anti-American Democrats...  https://rickwells.us/russian-laughing-mueller-joke/
VIDEO:  https://www.youtube.com/watch?v=t4APoJtqXNw
.
Trump Team Briefs Security
Council on Mideast Peace Plan 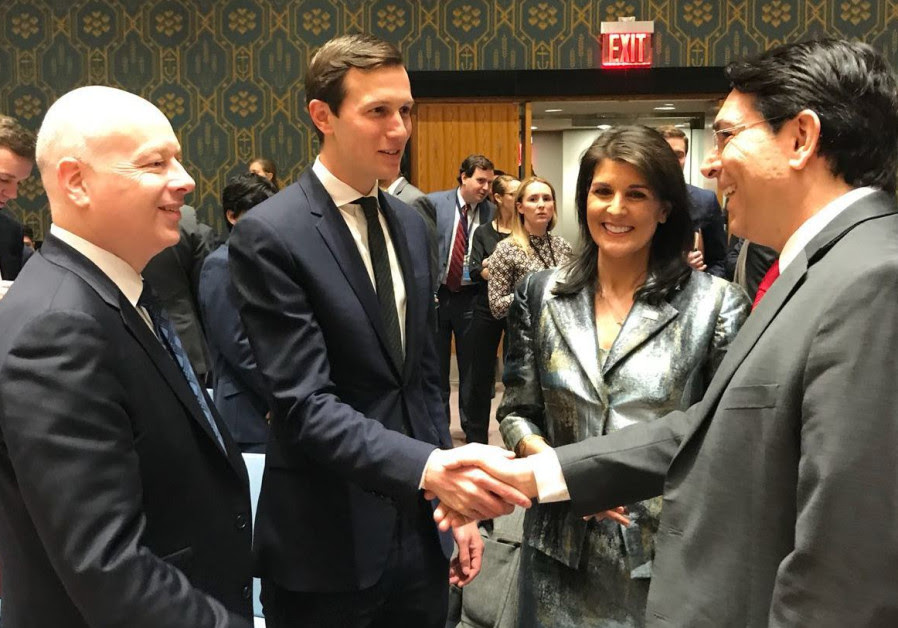 by MICHAEL WILNER
{ jpost.com } ~ US President Donald Trump’s Middle East peace team briefed members of the UN Security Council on their plan to jumpstart negotiations... between Israel and the Palestinians on Tuesday. Two sources familiar with the briefing told The Jerusalem Post that Jared Kushner, the president’s son-in-law leading the diplomatic effort, Jason Greenblatt, his special representative for international negotiations, and Nikki Haley, US envoy to the UN, fielded questions from diplomats for roughly an hour after a public session of the council concluded. The briefing by senior Trump administration officials followed a speech to the council by Palestinian Authority President Mahmoud Abbas, who asked UN members to come up with an international mechanism that would replace any US-led peace effort...  http://www.jpost.com/Arab-Israeli-Conflict/JPost-Exclusive-Trump-team-briefs-Security-Council-on-Mideast-peace-plan-543193?utm_source=newsletter&utm_campaign=21-2-2018&utm_content=jpost-exclusive-trump-team-briefs-security-council-on-mideast-peace-plan-543193
.
Mueller Comes Up short - Again

by Matthew Vadum
{ frontpagemag.com } ~ A Dutch lawyer unconnected to the unproven claim the Trump campaign somehow colluded with Russia to influence the outcome of the 2016 election... has pled guilty to lying to Special Counsel Robert Mueller’s investigators. This failure – yet again – to indict a Trump campaign official in connection with the campaign’s allegedly collusive behavior appears to constitute another tacit admission by Mueller that the Left’s electoral collusion conspiracy theory that he was commissioned to investigate is utter nonsense. Charging all these people with lying, instead of with anything related to collusion, is likely a prosecutorial tactic to pressure somebody somewhere into doing something. Mueller’s real target seems to be former Trump campaign manager Paul J. Manafort Jr. This small-potatoes indictment comes a year after the outlines of a Watergate-like conspiracy emerged in which a term-limited Democrat president used the privacy-invading apparatus of the state to spy on a Republican presidential candidate. Watergate differed in that President Nixon didn’t get involved in the plot against the Democratic National Committee until later as an accomplice after the fact...  https://www.frontpagemag.com/fpm/269383/mueller-comes-short-again-matthew-vadum
.
Former CIA Director James Woolsey Admits
CIA Interferes In Foreign Elections
For A “Very Good Cause” 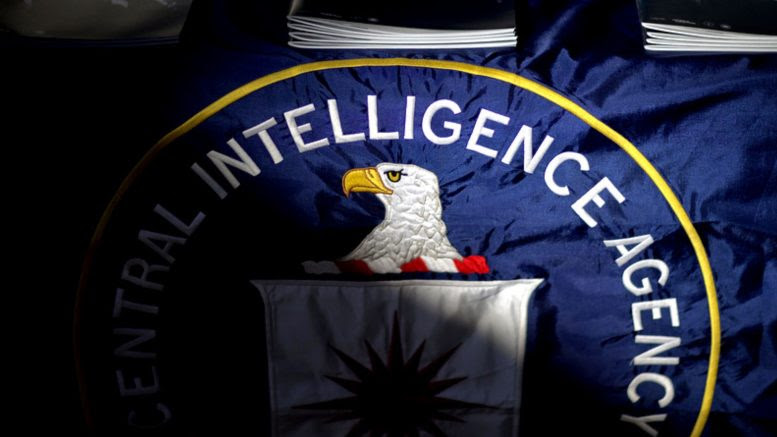 by Aaron Kesel
{ activistpost.com } ~ Former CIA director James Woolsey has admitted the U.S. interferes in foreign elections for a “very good cause.”... In an interview on Fox News, former CIA Director James Woolsey was asked whether the U.S. interferes in other countries’ elections, Woolsey responded, “Well, only for a very good cause in the interests of democracy.” “Oh, probably, but it was for the good of the system in order to avoid communists taking over,” Woolsey told Laura Ingraham on her Fox News show laughing. According to WikiLeaks, the U.S. government’s own data shows that its deep state in the CIA and the military-industrial complex has meddled in the elections of a whopping 81 foreign governments between 1946 and 2000, including Russia in the 1990s. That’s no laughing matter and frankly worrying...  https://www.activistpost.com/2018/02/former-cia-director-james-woolsey-admits-cia-interferes-in-foreign-elections-for-a-very-good-cause.html?utm_source=Activist+Post+Subscribers&utm_medium=email&utm_campaign=66470d9ffa-RSS_EMAIL_CAMPAIGN&utm_term=0_b0c7fb76bd-66470d9ffa-387888649
.
Pulosi Won’t Answer Question About Her
Own Wealth During Pro-Commie Lecture

by rickwells.us
{ rickwells.us } ~ Nancy Pulosi got her hypocrisy shoved back down her own throat as if she was an average American during the passing of liar-nObamacare... It happened during a town hall on taxes in Phoenix on Tuesday evening. Pulosi was there trying to sell the Americans in the audience, some of who were dumb enough to buy into her claims, that it’s better to give the government your money than to keep it and spend it yourself. It’s for the children, a frequent claim made by the greedy austerity merchants of the Democratic Party. But not your own children, the children of illegal aliens and “refugees,” and maybe their parents, grandparents and cousins. That’s who we’re supposed to cheerfully donate our hard-earned money to government to import and take care of. She doesn’t use the word citizen in any of her ramblings, talking of “initiatives that help people,” squatters and those who simply prefer to be taken care of included. She says our budget is supposed to be a statement of what is important to us as a nation. If that were really how she felt, she’d let President Trump, who won the election, build a border wall and give us border security and immigration reform...   https://rickwells.us/pelosi-own-wealth-lecture/
VIDEO:  https://www.youtube.com/watch?v=MC3QjHlOeQM
.

.
Is That Russia Troll Farm an Act of War? 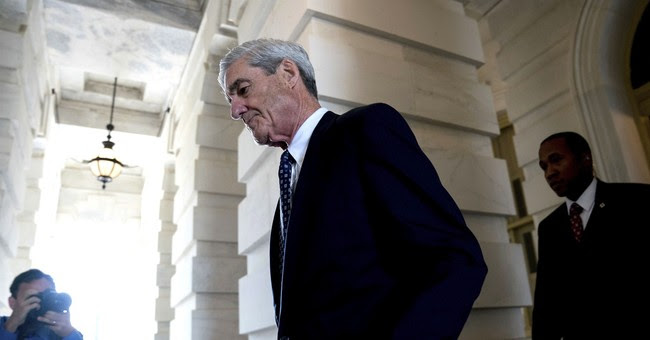 by Pat Buchanan
{ townhall.com } ~ According to the indictment by Special Counsel Robert Mueller, Russian trolls, operating out of St. Petersburg, took American identities on social media and became players in our 2016 election.

On divisive racial and religious issues, the trolls took both sides. In the presidential election, the trolls favored commie-Bernie Sanders, Jill Stein and Donald Trump, and almost never liar-Hillary Clinton.

One imaginative Russian troll urged Trumpsters to dress up a female volunteer in an orange prison jump suit, put her in a cage on a flatbed truck, then append the slogan, "Lock Her Up!"

How grave a matter is this?

This Russian troll farm is "the equivalent of Pearl Harbor," says Cong. Jerrold Nadler, who would head up the House Judiciary Committee, handling any impeachment, if Democrats retake the House.

When MSNBC's Chris Hayes pressed, Nadler doubled down: The Russians "are destroying our democratic process." While the Russian trolling may not equal Pearl Harbor in its violence, said Nadler, in its "seriousness, it is very much on a par" with Japan's surprise attack.

Trump's reaction to the hysteria that broke out after the Russian indictments: "They are laughing their expletives off in Moscow."

According to Sunday's Washington Post, the troll story is old news in Russia, where reporters uncovered it last year and it was no big deal.

While Mueller's indictments confirm that Russians meddled in the U.S. election, what explains the shock and the fear for "our democracy"?

Is the Great Republic about to fall because a bunch of trolls tweeted in our election? Is this generation ignorant of its own history?

Before and after World War II, we had Stalinists and Soviet spies at the highest levels of American culture and government.

The Hollywood Ten, who went to prison for contempt of Congress, were secret members of a Communist Party that, directed from Moscow, controlled the Progressive Party in Philadelphia in 1948 that nominated former Vice President Henry Wallace to run against Harry Truman.

Soviet spies infiltrated the U.S. atom bomb project and shortened the time Stalin needed to explode a Soviet bomb in 1949.

As for Russian trolling in our election, do we really have clean hands when it comes to meddling in elections and the internal politics of regimes we dislike?

Sen. rino-John McCain and Victoria Nuland of State egged on the Maidan Square crowds in Kiev that overthrew the elected government of Ukraine. When the democratically elected regime of Mohammed Morsi was overthrown, the U.S. readily accepted the coup as a victory for our side and continued aid to Egypt as tens of thousands of Muslim Brotherhood members were imprisoned.

Are the CIA and National Endowment for Democracy under orders not to try to influence the outcome of elections in nations in whose ruling regimes we believe we have a stake?

"Have we ever tried to meddle in other countries' elections?" Laura Ingraham asked former CIA Director James Woolsey this weekend.

"We don't do that anymore though?" Ingraham interrupted. "We don't mess around in other people's elections, Jim?"

"Well," Woolsey said with a smile. "Only for a very good cause."

Indeed, what is the National Endowment for Democracy all about, if not aiding the pro-American side in foreign nations and their elections?

Did America have no active role in the "color-coded revolutions" that have changed regimes from Serbia to Ukraine to Georgia?

When Republicans discuss Iran on Capitol Hill, the phrase "regime change" is frequently heard. When the "Green Revolution" took to the streets of Tehran to protest massively the re-election of President Mahmoud Ahmadinejad in 2009, Republicans denounced President liar-nObama for not intervening more energetically to alter the outcome.

When China, Russia and Egypt expel NGOs, are their suspicions that some have been seeded with U.S. agents merely marks of paranoia?

The U.S. role in the overthrow of Premier Mossadegh in Iran in 1953, and of Jacobo Arbenz in Guatemala in 1954, and of President Ngo Dinh Diem in Saigon in 1963 are established facts.

When the democratically elected Marxist Salvador Allende was overthrown in Chile in 1973, and committed suicide with an AK-47 given to him by Fidel Castro, the Nixon White House may have had no direct role. But the White House welcomed the ascendancy of Gen. Augusto Pinochet.

What do these indictments of Russians tell us? After 18 months, the James Comey-Robert Mueller FBI investigation into the hacking of the DNC and John Podesta emails has yet to produce evidence of collusion.

Yet we do have evidence that a senior British spy and Trump hater, Christopher Steele, paid by the liar-Hillary Clinton campaign and DNC to dig up dirt on Trump, colluded with Kremlin agents to produce a dossier of scurrilous and unsubstantiated charges, to destroy the candidacy of Donald Trump. And the FBI used this disinformation to get FISA Court warrants to surveil and wiretap the Trump campaign.

Why is this conspiracy and collusion with Russians less worthy of Mueller's attention than a troll farm in St. Petersburg?

https://townhall.com/columnists/patbuchanan/2018/02/20/is-that-russia-troll-farm-an-act-of-war-n2451357?utm_source=thdaily&utm_medium=email&utm_campaign=nl&newsletterad=
E-mail me when people leave their comments –
Follow