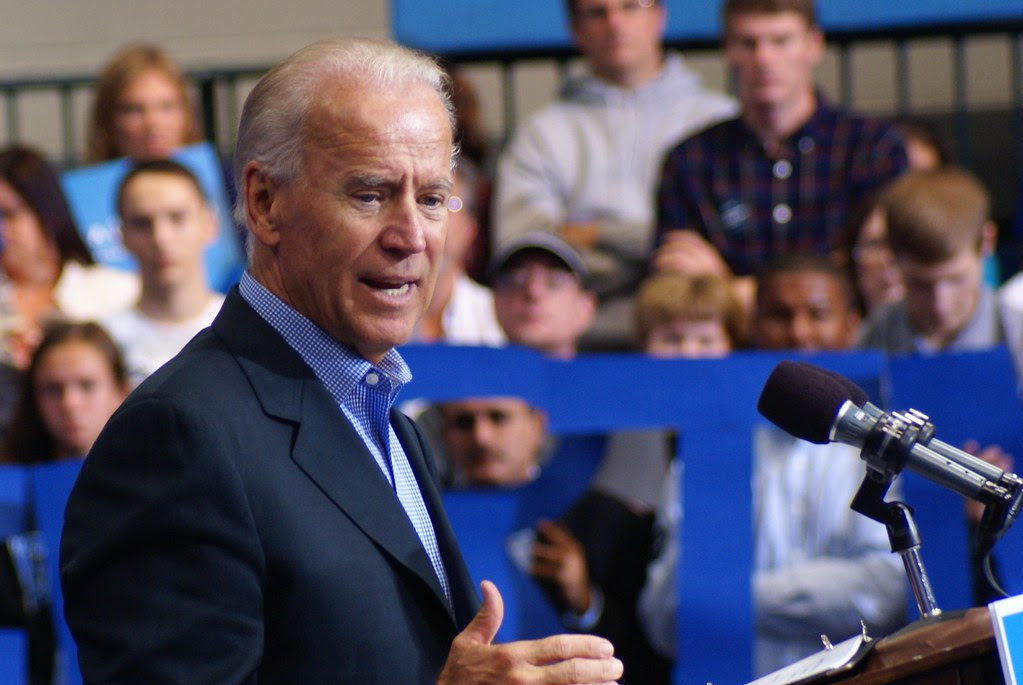 by Chrissy Clark
{ thefederalist.com } ~ loose lips liar-Joe Biden took Twitter by storm as he began rolling out his plans to combat climate change if elected president... loosev lips liar-Biden calls his new initiative the Clean Energy Revolution.  “Science tells us that how we act or fail to act, in the next 12 years will determine the very livability of our planet,” loose lips liar-Biden said in his announcement video. Sound familiar? That’s because America’s socialist sweetheart, Rep. comie-Alexandria Ocasio-Cortez (AOC), has been mocked for saying almost exactly the same thing. “Climate change is here + we’ve got a dealing: 12 years left to cut emissions in half,” commie-AOC tweeted. commie-AOC famously created the Green New Deal, an environmentalist proposal that has been mocked across party lines. Just one month later, here loose lips liar-Biden come with almost the exact same plan. He essentially gave a synopsis of commie-AOC’s Green New Deal, then changed the name. The Green New Deal isn’t the only idea loose vlips liar-Biden is pawning off as his own, either. Josh Nelson, the vice president at CREDO Mobile, noticed that loose lips liar-Biden’s Clean Energy Revolution had striking similarities to a letter sent to the Senate Environment and Public Works Committee from the Blue Green Alliance. Page 96 of the letter reads: 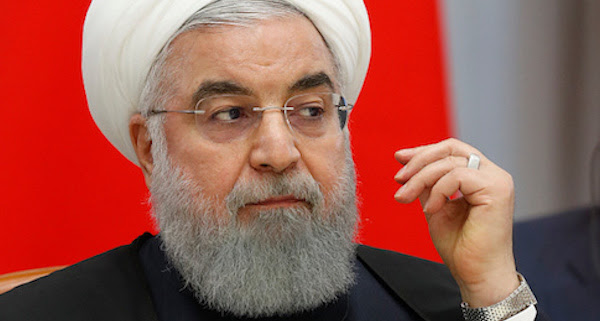 by Adam Kredo
{ freebeacon.com } ~ As Iran continues to ramp up its most contested nuclear work in violation of the landmark nuclear accord, Republican hawks in Congress are preparing a final push to destroy the deal and reimpose a set of biting sanctions... that the Trump administration has balked on implementing in recent months, according to multiple officials familiar with the effort. International nuclear inspectors overseeing Iran's nuclear work recently disclosed the Islamic Republic has kept true to its threats of restarting key portions of its nuclear program that could be used to build a weapon. This includes blowing past caps on the amount of enriched uranium—the key component in a bomb—Iran can store in country, as well as heavy water, a plutonium byproduct that also could fuel a weapon. Iran also has breached provisions of the nuclear accord that were meant to limit the installation of advanced centrifuges, a mechanical device that can speedily enrich uranium to levels needed for a bomb. Iranian officials have maintained these moves are part of an effort to force European countries still party to the deal to help Tehran skirt U.S. economic sanctions, which have shattered the Islamic Republic's economy. With Iran amping up its cash demands in what U.S. officials see as an international blackmail campaign, GOP hawks in Congress see an opportunity to convince the Trump administration to follow through on promises to nix a set of sanctions waivers that have enabled Iran to legally continue secretive nuclear work at a range of sites, including one that previously housed the country's weapons program. The issue of these nuclear waivers has been percolating for some time, with the State Department and other elements of the Trump administration arguing against revocation. The inter-agency fight has split certain elements of the Trump administration, with some camps advocating a hardline approach and others lobbying for restraint. The debate has been ongoing for months and has generated frustration among congressional hawks, who would like to see the administration follow through on its promises of "maximum pressure" on Tehran...
https://freebeacon.com/national-security/iran-hawks-prep-final-push-to-dismantle-nuclear-deal/?utm_source=Freedom+Mail&utm_campaign=0a2bcb002a-EMAIL_CAMPAIGN_2019_06_04_09_13_COPY_199&utm_medium=email&utm_term=0_b5e6e0e9ea-0a2bcb002a-45611665
.
Russian Su-35 Fighter Makes ‘Irresponsible’
Intercept of Navy P-8A Over Mediterranean 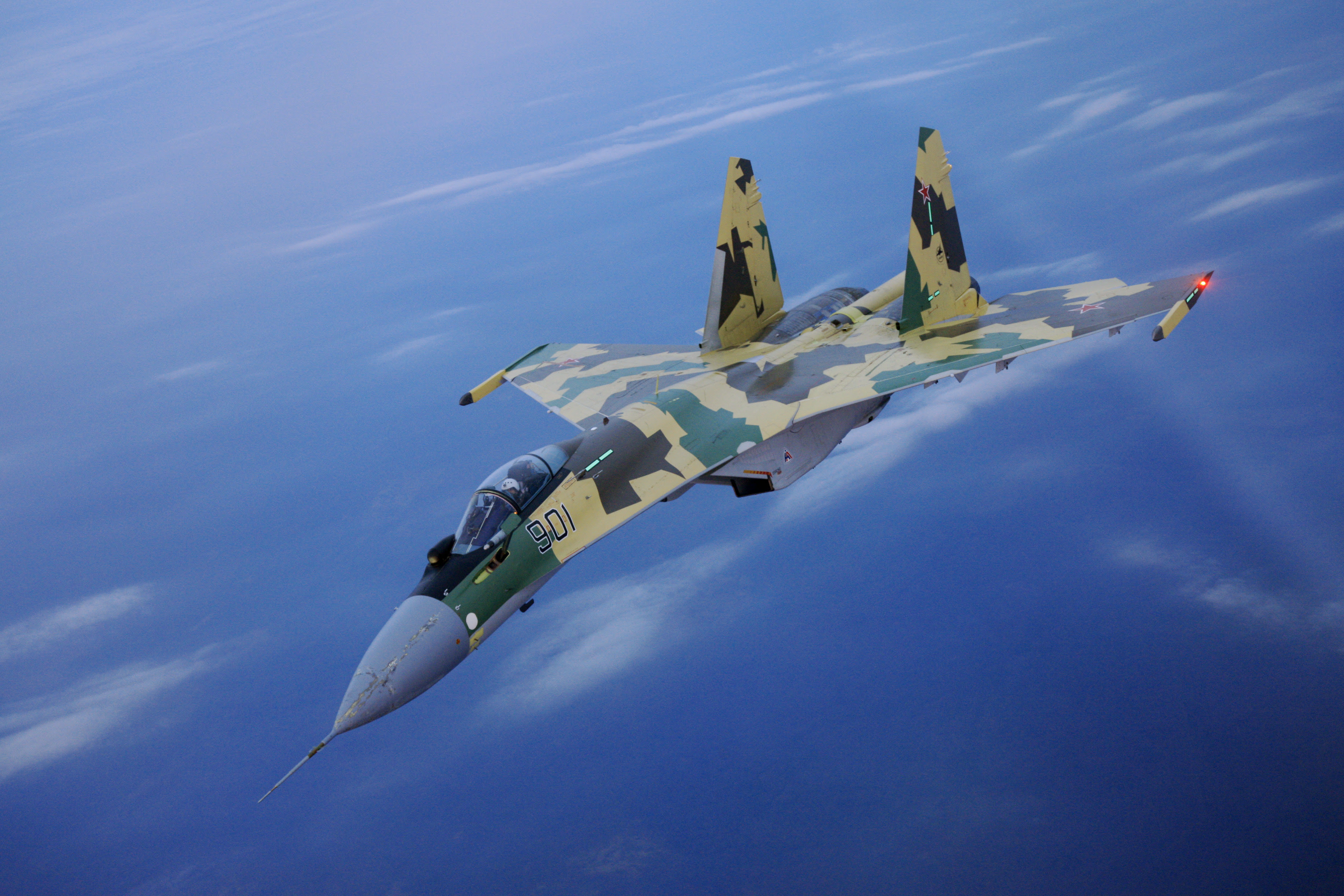 by Sam LaGrone
{ news.usni.org } ~ A Navy surveillance aircraft was intercepted by a Russian fighter over the Mediterranean Sea “determined to be unsafe,” according to a late Tuesday statement from U.S. 6th Fleet... A Navy P-8A Poseidon was operating in international airspace over the Mediterranean when it was intercepted by a Russian Sukhoi Su-35 three times. While the first and third interactions were determined to be in line with international rules, the second was called out by 6th Fleet. “The second interaction was determined to be unsafe due to the SU-35 conducting a high speed pass directly in front of the mission aircraft, which put our pilots and crew at risk,” read the statement. “The crew of the P-8A reported wake turbulence following the second interaction. The duration of the intercept was approximately 28 minutes.” The Navy release added, “while the Russian aircraft was operating in international airspace, this interaction was irresponsible. We expect them to behave within international standards set to ensure safety and to prevent incidents, including the 1972 Agreement for the Prevention of Incidents On and Over the High Seas (INCSEA). Unsafe actions‎ increase the risk of miscalculation and potential for midair collisions.” The U.S. aircraft was operating consistent with international law and did not provoke this Russian activity.   https://news.usni.org/2019/06/04/russian-su-35-fighter-makes-irresponsible-intercept-of-navy-p-8a-over-mediterranean?utm_source=USNI+News&utm_campaign=1e97f18132-USNI_NEWS_DAILY&utm_medium=email&utm_term=0_0dd4a1450b-1e97f18132-231491269&mc_cid=1e97f18132&mc_eid=3999f18767
.
The Iranian-Palestinian Plan
to Thwart Trump's Peace Plan 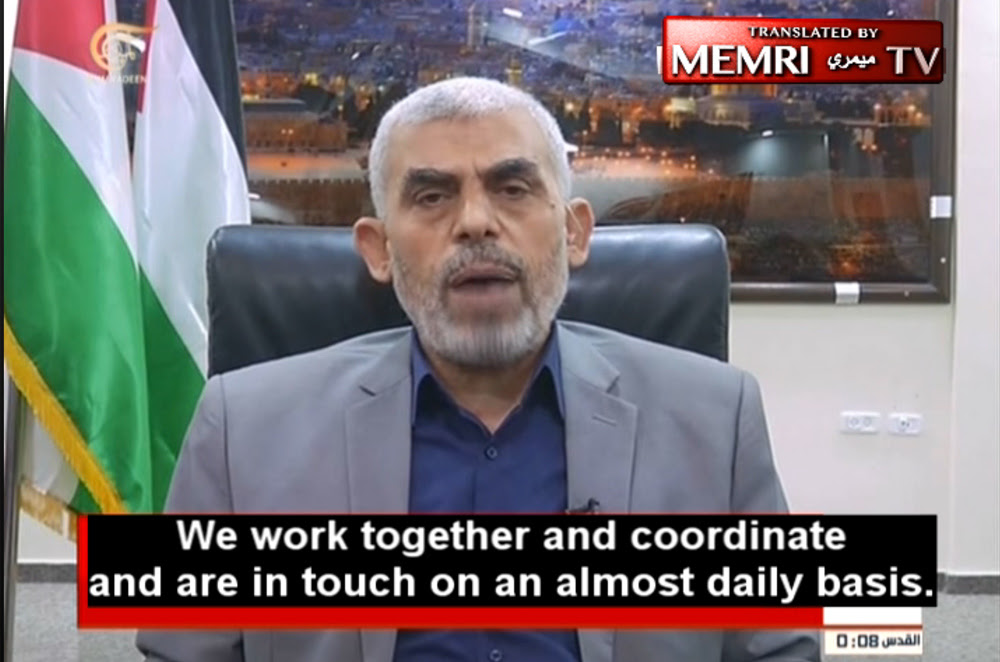 by Khaled Abu Toameh
{ gatestoneinstitute.org } ~ As the US administration prepares to roll out its long-awaited plan for peace in the Middle East, also known as the "Deal of the Century,"... Iran appears to be increasing its efforts to help its allies in the region try to thwart the plan. Recently, Iran seems to have stepped up its political and military support for radical Palestinian groups that are staunchly opposed to any peace agreement with Israel. These groups, including Hamas and Islamic Jihad, do not recognize Israel's right to exist and are publicly committed to its destruction and replacement by an Iranian-backed Islamic state. Iran, of course, has long shared the same ambition of destroying Israel and has never hesitated to make its position known to the world. In several statements during the past few decades, Iranian leaders have been frank about their wish that Israel be "a one-bomb country." Iran's Supreme Leader, Ayatollah Ali Khamenei, has several times referred to Israel as a "cancer" and threatened to "annihilate" the cities of Tel Aviv and Haifa. He has also taken to Twitter to denounce Israel as a "barbaric, wolf-like and infanticidal regime." Israel, he added, "Has no cure but to be annihilated." Earlier this year, the chief of Iran's Air Force, Gen. Aziz Nassirzadeh, was quoted as saying that his forces are "impatient and ready to fight against the Zionist regime to wipe it off the Earth." Such threats by Iranian leaders and officials are not uncommon or new. In fact, they accurately reflect Iran's long-standing policy of incitement against Israel and recurring threats to "annihilate the Zionist regime." To achieve their goal, the leaders of Iran have been providing financial and military support to their proxies in the Middle East, specifically Hamas, Islamic Jihad and Hezbollah -- three groups committed to Israel's obliteration...
https://www.gatestoneinstitute.org/14324/iran-palestinians-trump-peace-plan
.
The Summer of Climate Change Discontent
by Brian C. Joondeph
{ americanthinker.com } ~ Trump derangement syndrome is reaching new levels of insanity. The left is increasingly frustrated over all things Trump, with the next three months set to be the Democrat’s summer of discontent... From Trump’s rising poll numbers to the blatant idiocy of the “best and brightest” Democrat candidates dreaming of beating Trump in 2020. From Attorney General William Barr investigating the origins of the anti-Trump coup to the new tariffs on Mexico, essentially fulfilling Trump’s campaign promise of making Mexico pay for the wall. Climate change will be another source of discontent for Democrats as their predictions once again get buried under a snowpack of reality. My local paper, the left-wing Denver Post, reports: “Water content of Colorado’s snowpack raises flood concerns, with levels peaking at 728 percent in the San Juans.” Imagine that, snowpack over seven times more than normal. How can that be with global warming broiling the planet, with only a decade before Earth burns to a crisp, at least according to a former bartender from the Bronx. Across the state in Aspen, there is also an abundance of snow. This headline doesn’t make much of a case for global warming, “Aspen Mountain bonus weekend returns Saturday, Sunday with solid snow coverage.” It’s rare for Aspen to reopen for Memorial Day weekend, but this year they are opening the following weekend as well. Nearby Breckenridge  also has more snow than they know what to do with. “Breckenridge Ski Resort announced yet another Ski Season extension! Bringing the total to three extensions this 2018/2019 Ski Season.” Most Colorado ski resorts close in mid-April, yet here we are in June with skiing now competing with golf and summer barbeques for weekend fun. California is also sharing in the snow. “Mammoth Mountain on Friday announced it would be extending its ski and snowboard season into August.” If they reopen in October, that could mean a ten-month ski season, something one might see in Northern Canada or Siberia where it’s really cold. Yet this is California. And the planet is warming, or so we are told...
https://www.americanthinker.com/articles/2019/06/the_summer_of_climate_change_discontent.html
.

.
About Those 'Racist' Navy Call Signs...

National Security Desk:  Even two-and-a-half years removed from the previous administration, our Patriot Armed Forces personnel are still contending with more Barack scumbag/liar-nObama effluent. The latest comes from the Navy, which is dealing with the truly pressing concern over … how pilots choose their call signs.

The head of naval aviation has directed the creation of a new process for approving and reviewing pilots’ call signs after two African-American aviators at an F/A-18 Hornet training squadron in Virginia filed complaints alleging racial bias in the unit, from which they said they were unfairly dismissed.

In a formal endorsement letter signed May 13, Vice Adm. DeWolfe Miller, commander of Naval Air Forces, said he found the two aviators, a Navy lieutenant and a Marine Corps captain, were correctly removed from Strike Fighter Squadron (VFA) 106 out of Naval Air Station Oceana due to “substandard performance,” despite errors and inconsistencies discovered in the grading and ranking process.

However, Miller said he did find inappropriate conduct by instructor pilots who did not treat the pilots-in-training “with appropriate dignity and respect,” using discriminatory call signs and having inappropriate and unprofessional discussions about them on social media.

He directed the Chief of Naval Air Training to have all training command and fleet replacement squadrons in the Navy formalize a call sign assignment and review process within 90 days, including appropriate peer board representation for minority and female aviators. And he recommended that multiple officers, including a Navy captain, receive rebukes, counseling or administrative punishment for their role in events substantiated by the investigation.

Military pilots rarely choose their own call signs. If they do, it will typically be replaced with one given by fellow squadron pilots. A pilot’s call sign can originate from a plethora of sources. It may be in reference to a physical characteristic or personality trait. It may be a riff or play on the pilot’s name. Or it may be based on something silly or stupid that the pilot did.

Call signs are spontaneous and “organic” in that they can originate from just about anything and may be changed at any time. They are not, and have never been the purview of flag officer-mandated review boards, nor should they ever be.

A former Marine fighter pilot and member of our National Advisory Committee offered his assessment: “It is a truly sad state of affairs when the ‘Air Boss’ needs to engage in an issue that should have been handled and resolved at the squadron commander level, if not lower. It is an even sadder state of affairs when the ‘solution’ to this ‘problem’ is the implementation of a formal call sign assignment and review process, to include appropriate peer board representation for minorities and females. The saddest thing of all is how thoroughly the cancer of ‘political correctness’ has metastasized in the body of our military fighting force, and how little is done by senior military leadership to fight that cancer.”  ~The Patriot Post