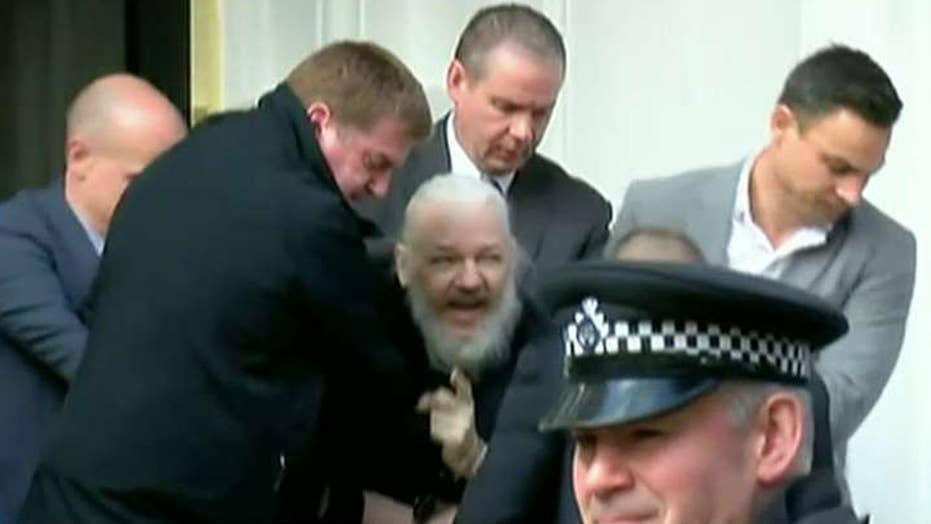 by Ryan Gaydos
{foxnews.com} ~ WikiLeaks founder Julian Assange was charged Thursday with conspiracy to commit computer intrusion for aiding Chelsea Manning in the cracking of a password to a classified U.S. government computer in 2010... the U.S. Justice Department announced hours after Assange's arrest in London. Assange is accused of engaging in a conspiracy with Manning, the former U.S. Army analyst, in breaking a password stored on a U.S. Defense Department computer connected to a U.S. government computer network for classified documents and communications, the Justice Department said. Manning later transmitted a trove of classified government files to Assange, whose website posted the materials to a worldwide audience. Cracking the password allowed Manning to use a different username "rather than her own,” officials said. “During the conspiracy, Manning and Assange engaged in real-time discussions regarding Manning’s transmission of classified records to Assange,” the Justice Department said. “The discussions also reflect Assange actively encouraging Manning to provide more information.  During an exchange, Manning told Assange that ‘after this upload, that’s all I really have got left.’ To which Assange replied, ‘curious eyes never run dry in my experience.’" Assange faces a maximum of five years in prison if he’s convicted of the charge. He pleaded innocent to a separate charge of failing to surrender to a Swedish court and skipping bail while in a British courtroom. Earlier Thursday, Assange was carried out of the Ecuadorian embassy in London in the arms of British police, who arrested him in a dramatic scene that ended Assange's nearly 7-year stay at the embassy -- and left the world watching to see if the anti-secrecy site would retaliate...   https://www.foxnews.com/world/ecuador-withdraws-asylum-from-julian-assange-arrested-by-uk-police
VIDEO:  https://video.foxnews.com/v/6025116614001/
.
Gaetz Introduces Resolution to Remove
scumbag-Schiff from House Intel Committee

by Mike Brest
{dailycaller.com} ~ Republican Florida Rep. Matt Gaetz unveiled his new resolution targeting House Intelligence Committee Chairman scumbag-Adam Schiff for his handling of the Russian collusion theory... during Tucker Carlson’s Wednesday show. The resolution, titled “Preventing Extreme Negligence with Classified Information Licenses Resolution“—or “Pencil Act”—calls for scumbag-Schiff’s resignation from the committee. The acronym is a reference to “pencil neck,” which is President Donald Trump’s recent nickname for scumbag-Schiff. “Expressing the sense of the House of Representatives that Congressman scumbag-Adam Schiff should be removed from the Permanent Select Committee on Intelligence of the House and that his security clearance should be revoked immediately,” the resolution begins. “Whereas Congressman scumbag-Adam Schiff is the Chairman of the Permanent Select Committee on Intelligence of the House of Representatives.” “I have filed legislation today, sent to the House, that scumbag-Adam Schiff needs to be removed from the Intelligence Committee, because how are the rest of us supposed to be able to rely on a man, who you just showed, lied to the American people when he said that there was not spying? Or when he lied and said that there was actual evidence of collusion or clear evidence of collusion?” Gaetz began...
https://dailycaller.com/2019/04/10/gaetz-schiff-intel-committee-russia/
VIDEO:  https://www.youtube.com/watch?v=piPG_FbxzcM
.
Collusionpalooza and its consequences 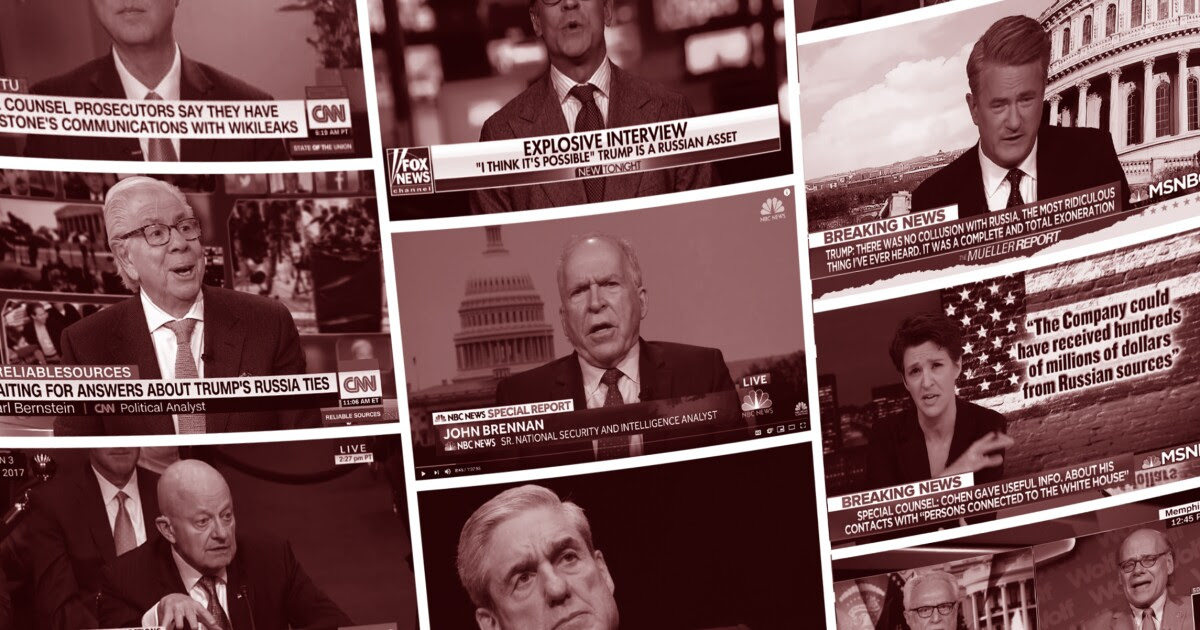 by Becket Adams
{ washingtonexaminer.com } ~ In early March, Terry Moran of ABC News predicted a “huge … reckoning“ for the press if special counsel dirty cop-Robert Mueller’s investigation did not find President Trump’s campaign conspired with Russia to steal the 2016 election... The reckoning is now. And the consequences bode ill not just for media companies’ bottom line but for national security and electoral integrity. On March 24, Attorney General William Barr announced dirty cop-Mueller’s team failed to “establish that the members of the Trump campaign conspired or coordinated with the Russian government in its election interference activities.” Barr also said the investigation, involving 40 agents, 2,800 subpoenas, 500 search warrants, and 500 witness interviews, could not find enough evidence“ to establish that the president committed an obstruction-of-justice offense.” All that remains now of the disastrously undisciplined collusion news cycle, which lasted more than two years, is a worrisome alliance between California's Silicon Valley and the federal government, the badly battered reputations of national news media, leading members of Congress, and former heads of the nation’s preeminent intelligence and law enforcement agencies, and a growing sense of fatigue and disillusionment in a public that has been badly misled. A Washington Post survey published March 30, for example, found that adults are split 49-48 on whether members of the House of Representatives “should continue to investigate” if the president “obstructed justice.” Respondents are also split 49-45 over whether the dirty cop-Mueller investigation was even “worthwhile.”...
https://www.washingtonexaminer.com/opinion/collusionpalooza-and-its-consequences?utm_source=WEX_News%20Brief_04/10/2019&utm_medium=email&utm_campaign=WEX_News%20Brief&rid=5261
.
Candace Owens Kicks Lying Ted Lieu’s Butt
At Hearing On White Nationalism 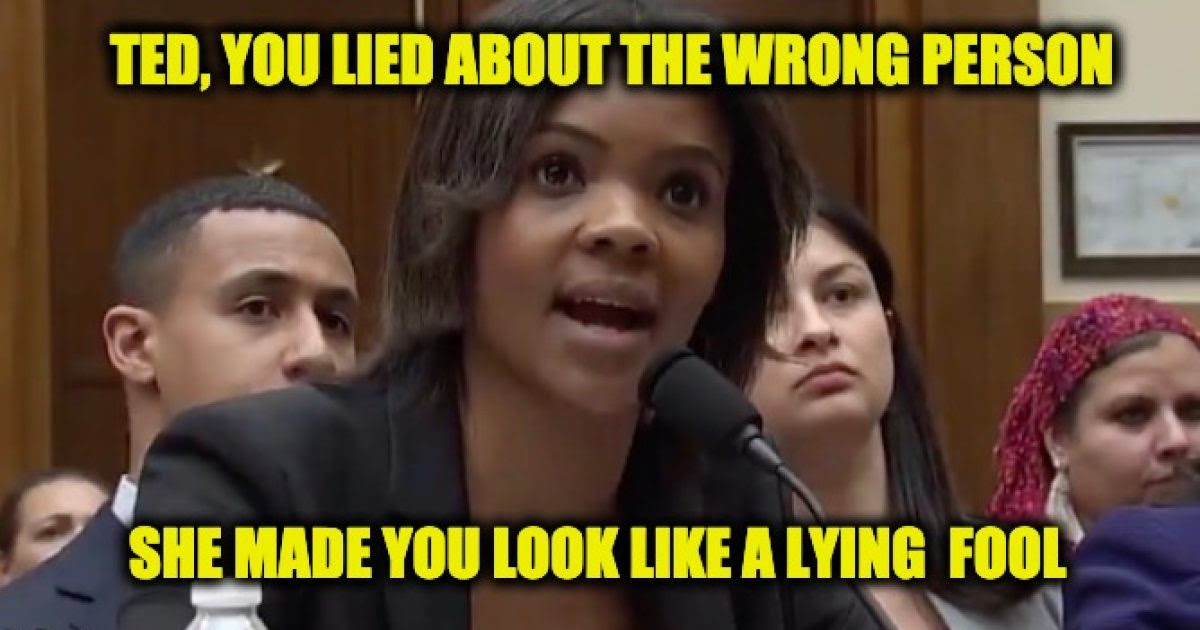 by Joe Newby And Jeff Dunetz
{ /lidblog.com } ~ On Tuesday, Candace Owens, communications director for Turning Point USA, shredded Rep. Ted Lieu, D-Calif., at a House Judiciary hearing... on white nationalism and hate crimes. Lieu showed himself to be a despicable lying liar when he played a selectively edited recording of previous comments she made about Adolf Hitler. “Out of all the people the Republicans could have selected, they picked Candace Owens. I don’t know Ms. Owens, I’m not going to characterize her, I’m going to let her own words to the talking,” he said before playing the out-of-context recording. Of all the people Ted Lieu could have cherry picked a recording to project a false image of someone,  he chose the wrong person. Candace Owens made mincemeat of the lying Lieu. “I think it’s pretty apparent that Mr. Lieu believes that black people are stupid and will not pursue the full clip…That was unbelievably dishonest…I’m deeply offended by the insinuation of revealing that clip without the question that was asked of me,” she said...   https://lidblog.com/candace-owens/
VIDEO:  https://twitter.com/cspan/status/1115674485699616769?ref_src=twsrc%5Etfw%7Ctwcamp%5Etweetembed%7Ctwterm%5E1115674485699616769&ref_url=https%3A%2F%2Flidblog.com%2Fcandace-owens%2F
.
Trump says he won't release his tax returns,
setting up legal fight with Congress 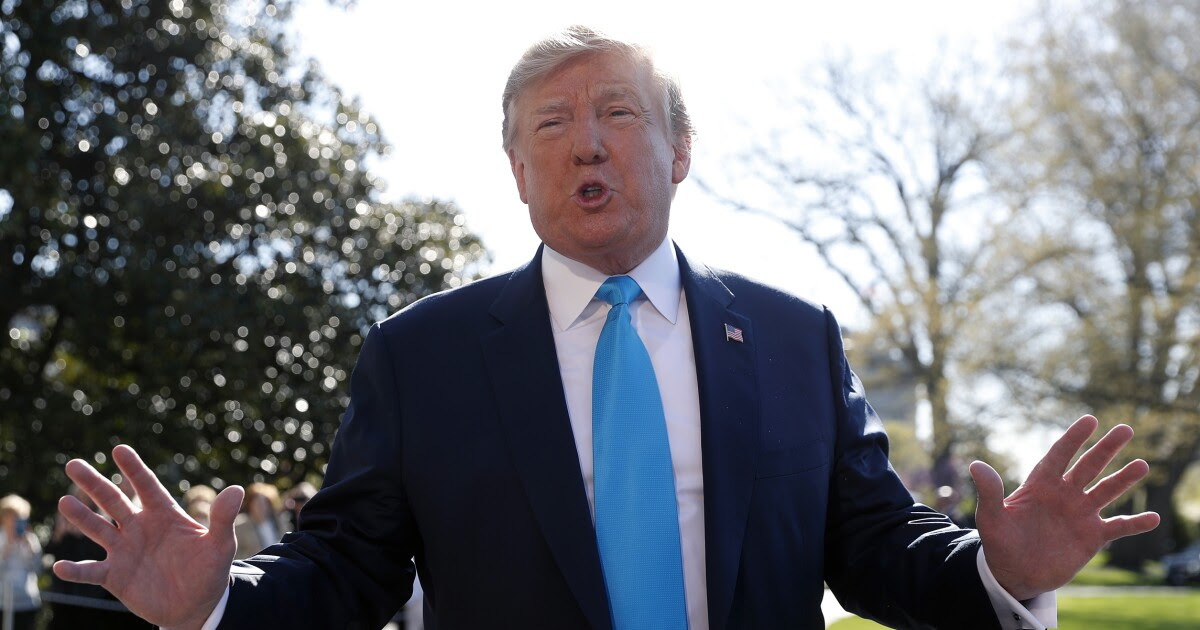 by Colin Wilhelm
{ washingtonexaminer.com } ~ President Trump committed Wednesday to fighting House Democrats' efforts to obtain his tax returns, saying that he has “no obligation” to release the information... “I have no obligation to do that while under audit and no lawyer would tell you to release your tax returns while you’re under audit,” Trump told reporters at the White House. By IRS rules put in place after President Richard Nixon was found to have underpaid on his taxes, every president and vice president is placed under audit during their tenure in office.“I would love to give them but I’m not going to do it while I’m under audit,” Trump said. He gave the same reasoning for not releasing his tax returns during the presidential campaign, although no law prevents him from releasing his tax information while under audit. Rep. Richard Neal, D-Mass., the chairman of the House Ways and Means Committee, has invoked a law that grants him power to review tax returns as part of legislative oversight. The deadline for Neal’s request, which was sent to the IRS last week, is Wednesday. On Friday, personal attorneys for Trump wrote the IRS in an attempt to head off the request, and Treasury Secretary Steven Mnuchin, who oversees the IRS, declined to tell Congress in testimony yesterday if he planned to cooperate with the request...
https://www.washingtonexaminer.com/policy/economy/trump-says-he-wont-release-his-tax-returns-setting-up-legal-fight-with-congress?utm_source=WEX_Breaking%20News%20Alert_04/10/2019&utm_medium=email&utm_campaign=WEX_Breaking%20News&rid=5261  .
.

Lewis Morris:  The Trump administration announced Monday that it will designate the Iran Revolutionary Guard Corps (IRGC) as a foreign terrorist organization. This marks the first time the United States has designated an official state body as a terrorist entity, and the change is designed to put heavy pressure on Iran to end its destabilizing activities in the Middle East.

The IRGC was established after the 1979 Iranian Revolution as a paramilitary group charged with the security of the ruling class of mullahs. It answers only to the country’s supreme leader, and neither the government nor the military has any jurisdiction over its actions.

The IRGC’s unique position in the Iranian power structure gives it influence over a significant portion of the country’s economy, especially in banking. These ties to domestic and foreign businesses have allowed the IRGC to provide materiel support to terrorists throughout the Middle East and beyond. It also controls the nation’s ballistic-missile program.

The U.S. government has known for years that the IRGC takes part in terrorist activities, so this move is a long time coming. Back in 2015, then-Secretary of State Ash Carter testified that the Iranians, largely through the IRGC’s Quds Force, were responsible for the deaths of at least 500 American service personnel in Iraq. That number was recently revised to 608.

Trump’s predecessor, Barack scumbag/liar-nObama, chose to actually reward Iran’s terrorist behavior by signing on to a horribly weak nuclear deal and paying the Iranians $1.7 billion in cold, hard cash that he insisted at the time was not a ransom. Spoiler alert: it was.

At the time, scumbag/liar-nObama, who fancied himself an astute statesman, wanted to cement his legacy by creating better relations with Iran. The Iranians, seeing him for a sucker, made a complete fool out of Obama by getting the U.S. to agree to a payout to cover a $400 million business deal gone bad from around the time of the 1979 revolution, padded with 37 years of interest totaling $1.3 billion.

While scumbag/liar-nObama tried to insist that this was not a ransom payment, it was coincidentally timed with the release of foreign prisoners held in Iranian jails. The money was delivered on pallets in several different currencies via a military transport in the middle of the night. The deal had all the appearances of something you might see in a South American narco state, not a legitimate deal between two nations. But there was nothing legitimate about this deal, and nothing substantive was gained from it, either.

Iran did not alter its behavior. Shocking, we know. In fact, as is virtually always the case when going soft on totalitarian regimes, the Islamic regime doubled down. And why not? scumbag/liar-nObama basically rewarded them for taking U.S. sailors hostage, for pursuing nuclear weapons despite the so-called nuclear deal, and for supporting terrorism. In fact, scumbag/liar-nObama ended up supporting terrorism, too, because that’s almost certainly where much of the $1.7 billion ransom he paid out ended up.

At the time, we reported that scumbag/liar-Obama’s feckless foreign policy would only embolden our enemies. Thankfully, Donald Trump has worked to reverse that trend, first by pulling out of the sham nuclear deal, and now by ratcheting up sanctions against businesses tied to the IRGC.

The IRGC has threatened to retaliate against the U.S. for being labeled a terrorist entity, which essentially proves that the IRGC is indeed a terrorist entity. This should not stop America from acting in its own best interest. The IRGC has been actively plotting against the United States for the better part of four decades. At least now we’re calling it as we see it and doing something about it.  ~The Patriot Post