by rickwells.us
{ rickwells.us } ~ At a campaign rally in Nashville for US Senate hopeful, Congresswoman Marsha Blackburn... President Trump took advantage of the opportunity to deliver some well stinging barbs at the expense of some most deserving Democrats. He told the crowd that “to keep this momentum going, to continue this incredible progress, to keep on winning, you have to vote Republican in November. You see what’s happening with the Democrats.” Trump expands on his thoughts, saying, “So Marsha’s very liberal Democrat opponent, Phil Bredesen, I never heard of this guy. Who is he, who is he?”  Trump answers his own question, to the delight of his fans, saying, “He’s an absolute, total tool of Chuck clown-Schumer. He’s a tool of Chuck clown-Schumer and, of course, the MS-13 lover Nancy Pulosi.” As the boos from the mere mention of Pulosi’s name start to fade, Trump goes after her a little more, saying, “She loves MS-13, can you imagine?”...
https://rickwells.us/trump-pelosi-schumer-nashville/
VIDEO:  https://www.youtube.com/watch?v=G024Y8xQH1c
.
Coup and Cover Up Tool Grassley
Issues Latest Ultimatum for DOJ to Ignore

by rickwells.us
{ rickwells.us } ~ Senate Judiciary Committee chairman Chuck Grassley pretends to be an obstinate, tough and no-nonsense defender of the Constitution to the American public... In reality his political adversaries, be they authentic or staged, know he’s a pushover. Just ignore him and he’ll accept it, every deadline is followed by another. He’s all bluster. The latest instance is his red line, last straw, “I really mean it this time” threat to DOJ over their obstruction and withholding of documents and use of redactions in response to demands by his committee. It’s just the latest in the series of refusals by the deep state DOJ to provide Congress with documents that would expose the anti-American activities and corruption at DOJ. This time it involves the redaction of documentation of the extravagant waste by criminal subversive Andrew McCabe and more importantly, the liar-nObama White House being directly involved in orchestrating illegal DOJ operations. The $70,000 price tag for a conference table for McCabe’s office was redacted from text messages between Peter Strzok and his lust partner Lisa page. Grassley stated in a letter sent to COUP kingpin Rod Rosenstein on May 23rd, his displeasure that not only had the redactions been made, but the excuses for why were not provided. Apparently DOJ realized there was no legitimate reason and “just to cover our butts” wasn’t on the list of choices...   https://rickwells.us/coup-grassley-ultimatum-doj-ignore/
.
British Media: Lockstep Lies 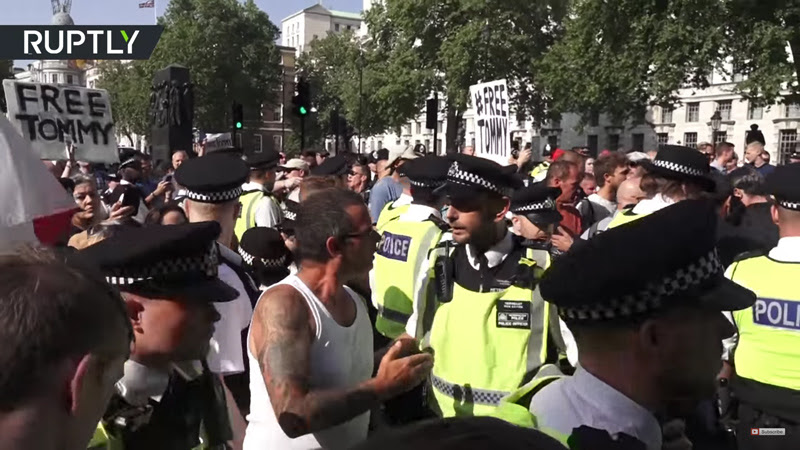 by Bruce Bawer
{ gatestoneinstitute.org } ~ Hundreds of supporters of Tommy Robinson filled the streets of London on Saturday in protest against his arrest in Leeds on Friday... but it was not until shortly after midnight on Monday that the Daily Mail posted a report about the protest on its website. The story, which was unsigned, was updated on early Monday afternoon. How to explain the delay? Did the Daily Mail's lawyers have to check with the British government, which had placed a gag order on reporting about the arrest, to make sure that it was permissible to report on the protest, if not directly on the arrest itself? The Mail made sure to describe the hundreds of protesters as "far-right." How did the Mail ascertain their politics? Does it not occur to the Mail that even if Robinson were far-right, which he is not, a British subject would not have to be far right to want to take in a protest against his shockingly rapid-fire arrest, trial, conviction, and imprisonment for the sole offense of reporting from outside a courthouse? The Evening Standard also reported on the protest – and also labeled the participants "far-right."...
https://www.gatestoneinstitute.org/12415/british-media-lies
.
Trump: ‘I Wish’ I Hadn’t Picked Jeff Sessions for Attorney General 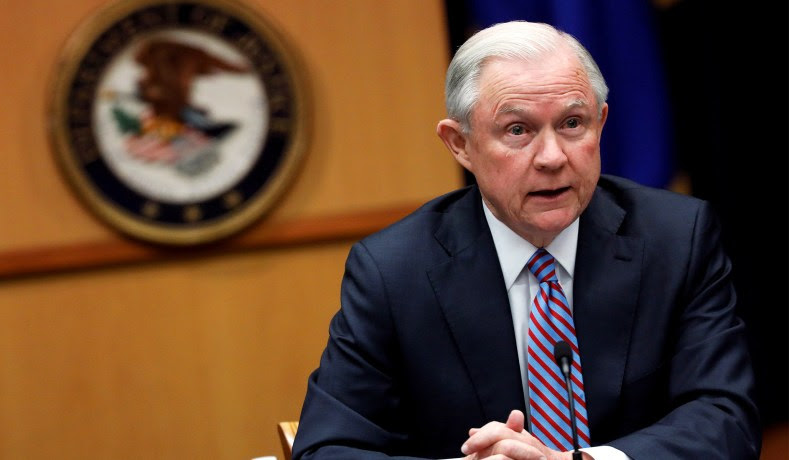 by MAIREAD MCARDLE
{ nationalreview.com } ~ President Trump said Wednesday morning that wishes he’d picked someone besides Jeff Sessions for attorney general... in one of his most direct attacks on the former senator. “I wish I did!” the president wrote on Twitter after quoting Representative Trey Gowdy, who expressed sympathy with Trump’s frustration with Sessions. Sessions recused himself from the Russia investigation a year ago, bowing to pressure after revelations about his contacts with the Russian ambassador and his role as a Trump campaign surrogate. Trump has publicly attacked Sessions on several occasions since his recusal, even though the former Alabama senator was one of the first high-profile Republicans to endorse the New York billionaire during the 2016 campaign...
https://www.nationalreview.com/news/jeff-sessions-trump-wishes-picked-different-attorney-general/
.
FBI Agents Afraid To Testify,
Say Congress Likely Won’t Protect Them

by KERRY PICKET
{ dailycaller.com } ~ Even as a new Rasmussen poll shows a majority of voters believe senior law enforcement officials broke the law to stop Donald Trump from beating liar-Hillary Clinton in the 2016 election... rank-and-file FBI agents who want to testify against their superiors to Congress feel they can’t due to an ineffective whistleblower protection law. These agents believe the sluggishness of the law exposes them to an inordinate risk of reprisal, so they have remained in hiding and afraid to speak the truth. This story is based on interview transcripts with two FBI agents that one former White House official provided The Daily Caller. A third special agent also reached out to The Daily Caller to provide information about the current state of the Bureau...
http://dailycaller.com/2018/05/28/sources-fbi-agents-afraid-to-testify-say-congress-likely-wont-protect-them/
.

by Political Editors:  Responding to an argument without fully understanding the point that is being made only serves to make the responder look foolish. Or as Proverbs puts it, “It’s stupid and embarrassing to give an answer before you listen.” Such was the case recently when the Leftmedia outlet Vice News published an article blasting the National Rifle Association for a video by Colion Noir. The article’s headline read, “NRA wants Congress to set ‘limitations’ on how the news can cover school shootings.” Gee, so Noir, a popular leader in the effort to defend Americans’ Second Amendment rights, was exposed for calling on the government to limit Americans’ First Amendment rights? That’s what Vice News would have you believe, in spite of the fact that Noir was making exactly the opposite point.

Article author Tess Owen writes, “The National Rifle Association is calling for outright censorship as news of yet another school shooting dominates national headlines.” She then quotes Noir in the NRA video, who says, “It’s time to put an end to this glorification of carnage in pursuit of ratings, because it’s killing our kids.” Owen then notes that the video was posted online less than a week after 10 people were killed in the Santa Fe High School attack in Texas. She then adds another Noir quote, “It’s time for Congress to step up and pass legislation putting common sense limitations on #MSM’s ability to report on these school shootings.”
Once again here is another example of why context and content matter. After Noir makes the quote above, the video fades to black and then after a moment Noir pops back into view to make the following statement: “You know that feeling of anxiety that shot through your body when I said the government should pass laws to limit the media’s ability to exercise their First Amendment right? That’s the same feeling gun owners get when they hear people say the same thing about the Second Amendment.” Noir then explains how he does believe that the mainstream media’s over-the-top coverage of these school attacks contributes to copy-cat behavior, but that he is opposed to any government enforcement against the freedom of the press. Noir concludes, “I vehemently disagree with the government infringing on the media’s First Amendment rights the same way I don’t believe the government should infringe on anyone’s Second Amendment rights.”
It’s a highly effective video exposing the fallacy of the gun-control activists’ narrative about not wanting to abolish the Second Amendment and yet wanting to limit gun rights. But even more so, the video proves the point that many conservatives have long argued — the outright anti-conservative bias of many MSM reporters, who are more agenda-driven activists than they are investigative journalists.  Here is the NRATV video in question:
~The Patriot Post