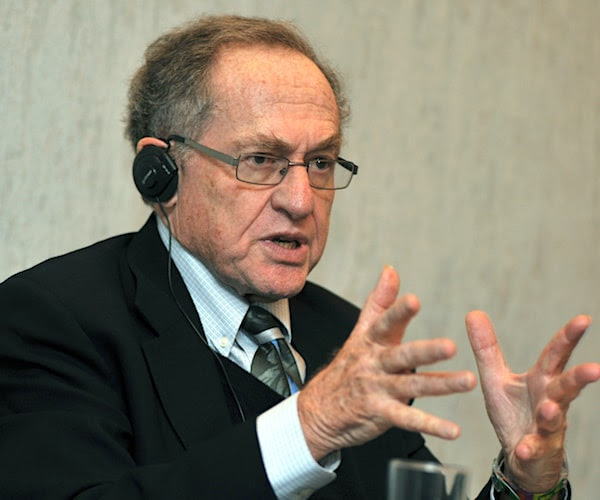 by Solange Reyner
{ newsmax.com } ~ Harvard law professor Alan Dershowitz on Tuesday questioned why President Donald Trump's legal team waived the privilege... to secret recordings between Trump and former lawyer Michael Cohen, following the release of a portion of the audio on CNN. "Why waive this lawyer-client communication? It's an honest conversation, and it ends up with the president doing the right thing," Dershowitz said. "Why do you have it out there?" When asked whether the tapes would hurt Trump, Dershowitz said "this is all political." "There is no crime here – there's no federal crime, no impeachable offense," he added. "This is all how the president looks in the court of public opinion." The portion CNN aired included then-candidate Trump discussing arrangements related to the payment to former playmate Karen McDougal...  https://www.newsmax.com/politics/alan-dershowitz-michael-cohen-audio-playboy-payment/2018/07/24/id/873568/?ns_mail_uid=29878495&ns_mail_job=1803684_07252018&s=al&dkt_nbr=010504eh5ghc
.
Federal Judge Gives Greenlight on ‘Racist’ Lawsuit Against Trump 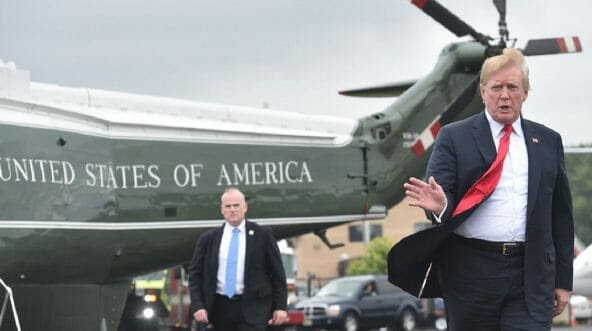 by WILL RACKE
{ westernjournal.com } ~ A federal judge in Boston is allowing a lawsuit against the Trump administration’s ending of temporary protections for immigrants... to proceed on the grounds the decisions were motivated by racial prejudice. U.S. District Judge Denise Casper rejected Monday the government’s bid to dismiss the lawsuit, which a group of immigrants and civil rights organizations filed in February in response to the cancellation of Temporary Protected Status for Haiti and El Salvador. Statements by administration officials — including President Donald Trump — make it plausible that “a discriminatory purpose was a motivating factor in a decision” to wind down TPS protections, Casper ruled. “Plaintiffs have successfully made out their prima facie case,” she wrote in a ruling that allows the lawsuit to go forward, according to Reuters. TPS is a humanitarian relief program that offers work permits and a temporary reprieve from deportation to foreign nationals of countries affected by war, natural disaster or some other extraordinary crisis...  https://www.westernjournal.com/ct/federal-judge-gives-greenlight-on-racist-lawsuit-against-trump/?utm_source=Email&utm_medium=conservativevideos&utm_campaign=dailyam&utm_content=libertyalliance
.
Brett Kavanaugh's views on executive power
take center stage in confirmation fight 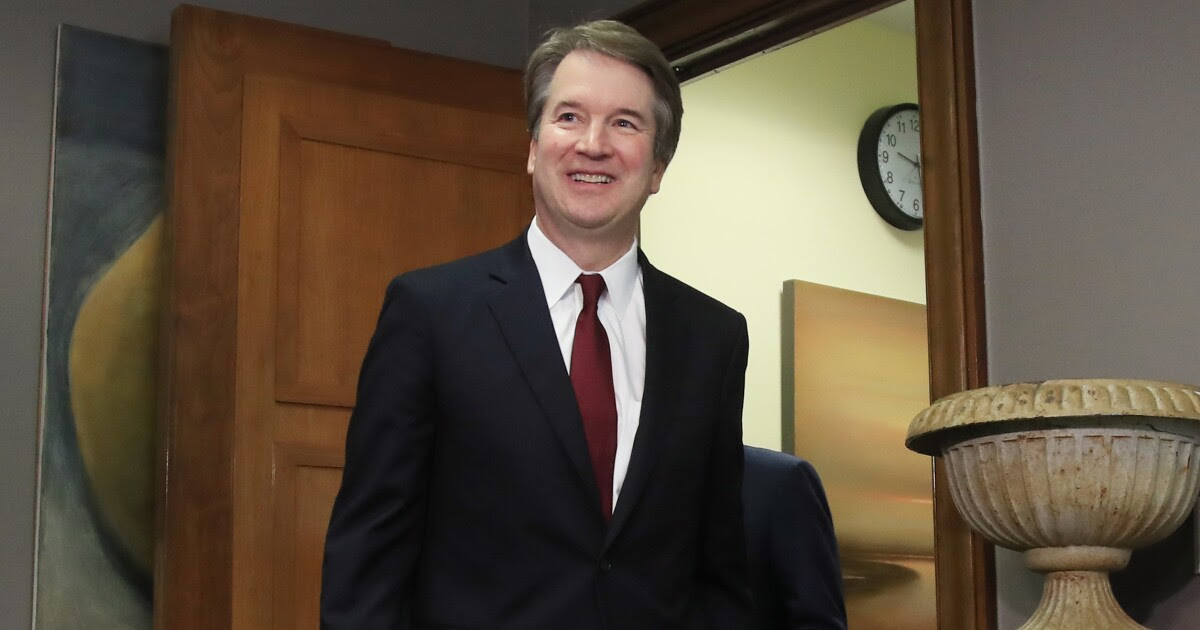 by Melissa Quinn
{ washingtonexaminer.com } ~ As dummycrats-Democratic senators continue to push for the release of more than a million pages related to Supreme Court nominee Brett Kavanaugh... the judge’s views on executive power have taken center stage in an already fiery confirmation battle.  Kavanaugh’s views on executive power have emerged as a flashpoint in the battle over his nomination, with Senate dummycrats-Democrats and the judge’s opponents questioning whether Kavanaugh would rule in cases before the Supreme Court in a manner that protects the president who appointed him to the bench. The concerns over his views on executive power are amplified by the investigation led by special counsel Robert Mueller, who for the past year has been examining Russian meddling in the 2016 election and whether Trump obstructed justice. “Question of the day: If Kavanaugh would have let Nixon off the hook, what is he willing to do for President Trump?” Senate Minority Leader Chuck clown-Schumer, D-N.Y., asked Monday. The new battlefront regarding Kavanaugh’s views of executive power reached a climax this weekend, when comments about U.S. v. Nixon during a roundtable discussion were revealed in a batch of documents he submitted to the Senate Judiciary Committee...The question is what would clown-Schumer do for liar-nObama?
https://www.washingtonexaminer.com/policy/courts/brett-kavanaughs-views-on-executive-power-take-center-stage-in-confirmation-fight?utm_source=WEX_News%20Brief_07/25/2018&utm_medium=email&utm_campaign=WEX_News%20Brief
.
Trump Puts the Deep State on Notice

by Lloyd Billingsley
{ frontpagemag.com } ~ President Trump will consider revoking the security clearances of former CIA boss scumbag/commie-John Brennan along with the clearances of former Director of National Intelligence scumbag-James Clapper... former National Security Adviser Susan Rice, and former CIA Director Michael Hayden. These officials, White House press secretary Sarah Sanders said Monday, “politicized and in some cases actually monetized their public service and their security clearances in making baseless accusations of improper contact with Russia.” Retention of their clearances, Sanders said, gave “inappropriate legitimacy to accusations with zero evidence.” “ scumbag/commie-John Brennan leaked information that almost cost the life of a double agent,” Sen. Rand Paul, told Fox News on Monday.“But now he’s a talking head on the outside, saying that basically President Trump should be executed – that’s what we do for treason. And so, yeah, I’m very concerned about him having privileges because of his past history.” Earlier Monday Paul tweeted “Is scumbag/commie-John Brennan making millions of dollars divulging secrets to the mainstream media with his attacks on @realDonaldTrump?” The senator, a supporter of the president’s Helsinki summit, also told Fox News he would support removal of top-secret security clearances from all retired CIA agents and officers...   https://www.frontpagemag.com/fpm/270840/trump-puts-deep-state-notice-lloyd-billingsley
.
Feds have more than 1.5 million files,
‘numerous witnesses’ in Maria Butina case 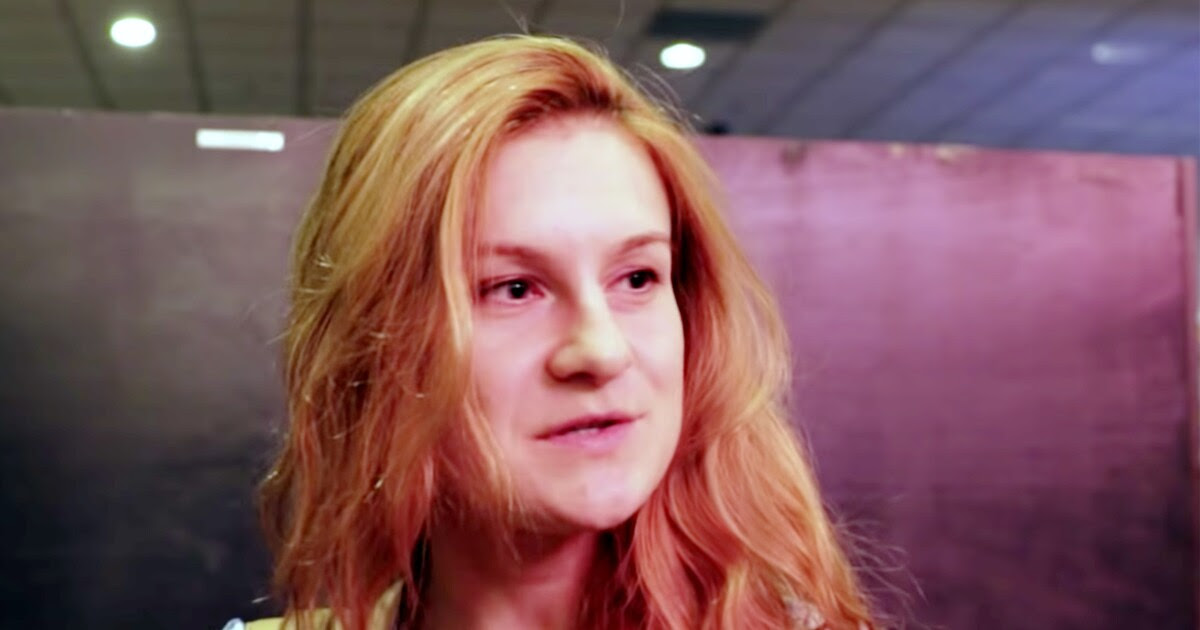 by Kelly Cohen
{ washingtonexaminer.com } ~ The federal government has more than 1.5 million files in its case against Maria Butina, a U.S. attorney revealed in court Wednesday... Tom Saunders, an assistant U.S. attorney, told U.S. District Judge Tanya Chutkan in Washington, that the federal government is ready to turn over 4 to 6 terabytes of data, or 1.5 million files, to the defense so they can prepare for trial. An additional 1.5 million files are being prepared to also be turned over and will be ready in the next two to three weeks, Saunders said. Butina was arrested earlier this month on charges of failure to register as a foreign agent and conspiracy against the U.S. The 29-year-old Russian national, who was attending American University for an advanced degree, has pleaded not guilty. In a court filing on Tuesday, the federal government revealed it also has “numerous witnesses” lined up to testify about Butina’s alleged activities working to influence U.S. politicians and political organizations on behalf of the Russian government...
https://www.washingtonexaminer.com/policy/courts/feds-have-more-than-1-5-million-files-numerous-witnesses-in-maria-butina-case?utm_source=WEX_Breaking%20News%20Alert_07/25/2018&utm_medium=email&utm_campaign=WEX_Breaking%20News
.

The Ninth Saves the Second — Again

by Nate Jackson:  For the second time in a week, the leftist Ninth Circuit Court of Appeals in California sided with gun rights. A three-judge panel of the court ruled Tuesday that the Second Amendment guarantees citizens the right to keep and bear arms outside the home, striking down Hawaii’s “may issue” gun-permit regime, which effectively limits gun possession to inside the home.

Hawaii resident George Young sued when he was twice denied a permit required to carry openly in public. In fact,  according to The Washington Free Beacon, “Hawaii did not issue a single gun-carry permit to any civilians in 2017. The same was true in 2016.”
“We do not take lightly the problem of gun violence,” Judge Diarmuid O'Scannlain wrote in Young v. Hawaii. “But, for better or for worse, the Second Amendment does protect a right to carry a firearm in public for self-defense.” The court should have avoided the politically motivated term “gun violence,” and the “for worse” caveat is largely because gang members selling drugs don’t abide by any laws and commit the lion’s share of crime using guns. But yes, the Second Amendment is indeed clear. The ruling went further: “While many respectable scholars and activists might find virtue in a firearms-carry regime that restricts the right to a privileged few, ‘the enshrinement of constitutional rights necessarily takes certain policy choices off the table.’”
Ironically, this is the same court that in 2016 ruled in Peruta v. City of San Diego that “there is no Second Amendment right for members of the general public to carry concealed firearms in public.”
The difference hinges on concealed vs. open carry. We in our humble shop tend to think open carry isn’t ideal in part because it’s unnecessarily provocative, but that isn’t to say citizens don’t have the right to do so. Now the question is whether the full Ninth Circuit will overturn this ruling en banc, as it did in the aforementioned Peruta decision, and, if so, whether the Supreme Court — with a clearer five-vote conservative majority — will then take up the case. The Supremes, much to the dismay of Justice Clarence Thomas, have not taken a Second Amendment case of any kind since 2010, despite numerous conflicting rulings on various elements in lower courts. In fact, the High Court specifically declined to take up Peruta. Perhaps the addition of Brett Kavanaugh will change that pattern.