.
Levin: Media Are Undermining
the Republic Trying to Destroy Trump

by Emily Ward
{cnsnews.com} ~ On his nationally syndicated radio talk show “The Mark Levin Show” on Thursday, Oct. 25, host Mark Levin said... the U.S. media were “undermining the republic” and trying to destroy President Donald Trump. “The problem is, as a collective, you’re undermining the republic,” Levin said about the media. “You’re undermining the republic. You’re trying to so thoroughly to destroy this presidency that you’ve lost all notion of professionalism and objectivity. And the idea that people shouldn’t notice it is preposterous. Of course we notice it. And the idea you shouldn’t be condemned for it is ridiculous.” Mark Levin’s remarks came after members of the media suggested, according to an article by NewsBusters.org, that President Trump’s attacks on the media were responsible for “suspicious packages” to various high-profile dummycrats-Democrats and CNN earlier this week...  https://www.cnsnews.com/blog/emily-ward/mark-levin-media-are-undermining-republic-trying-destroy-trump
VOICE VIDEO:  https://www.mrctv.org/videos/mark-levin-media-are-undermining-republic-trying-destroy-trump
.
Top dummycrats-Dem on Caravan: We Have to Be “Welcoming”

by Andrew
{conservativefreepress.com} ~ Sen. lowlife-Kamala Harris of California is barely trying to hide the fact that she’s going to mount a run for the White House in 2020... but her far-left stance on illegal immigration among other things is not going to do her any favors when it comes to securing the dummycrats-Democratic nomination, much less the presidency. In contrast to the way the country feels – and in sharp contrast to the tone taken by the Trump administration – lowlife-Harris said this week that the U.S. needs to show the migrant caravan more than 10,000 people strong by some accounts that we are “tolerant” and “welcoming.”  In Iowa (natch) to campaign for her fellow dummycrats-Democrats, lowlife-Harris was asked by CNN how the U.S. should respond to the caravan when it inevitably reaches the southern border. “We are a country that – our strength has always been that we are a tolerant country, that we are welcoming, in particular, to those who have fled harm,” she said. “And the idea that we’re vilifying any one group and the fear-mongering, that’s not in the best interest of our country. “What our country wants and what the people of our country want is they want leaders who are focused on the challenges that they face every day,” lowlife-Harris continued. “Like can they put food on the table and pay the bills by the end of the month … not vilifying one group for the sake of fear-mongering and politics.”...
http://www.conservativefreepress.com/politics/top-democrat-on-caravan-we-have-to-be-welcoming/
.
Lou Dobbs And Border Patrol Agent Clash
Over How To Stop Migrant Caravan

by Amber Athey
{dailycaller.com} ~ Fox Business Network’s Lou Dobbs got into a heated debate Thursday night with National Border Patrol Council President Brandon Judd... over border patrol’s ability to stop the migrant caravan headed to the southern border. Judd argued that border patrol cannot physically stop the caravan at the border, and must wait until they cross illegally and then apprehend them. Current “catch and release” policies will allow the immigrants to be released into the country, Judd explained, and the only real way to stop the caravan is to allow border patrol to hold its members pending their asylum status.“So the entire border patrol is standing helpless at the border?” Dobbs asked. “You’re helpless.” Dobbs insisted that the only solution, then, is to send the U.S. military to the border and allow them to stop the caravan before they cross the border. “They can’t even do that,” Judd said. “If they put one step into the United States we have to take them into custody if the military is there or not.”...
https://dailycaller.com/2018/10/26/lou-dobbs-brandon-judd-migrant-caravan/?utm_medium=email
VIDEO at the site.
.
SPLC-Touted Terrorism Study Casts a
Wide Net to Downplay Islamic Extremism 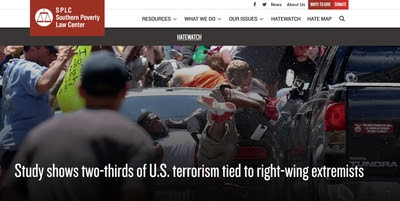 by Benjamin Baird
{investigativeproject.org} ~ Looking to "blow off steam," a pair of teenagers broke into the Ohio Chapel United Methodist Church near Columbus, Ind. last year to steal propane tanks... The vandals turned crosses upside down, smashed windows, and even torched a pew stored in the basement. Non-lethal incidents like church vandalism are a far cry from the bloodshed that occurred in the shadow of the rebuilt World Trade Center on Oct. 31, 2017, when ISIS-aligned Uzbek immigrant Sayfullo Saipov drove a rented pickup truck down a crowded bicycle path, killing eight people and wounding 12. Yet, a Quartz report published Sept. 11 reviewing terrorist attacks in 2017 compares numerous low-level acts of vandalism to less frequent — but far more lethal — jihadist violence, to argue that most terrorist acts in the United States are motivated by right-wing extremism. Analyzing data from the Global Terrorism Database (GTD), an open-source data set maintained by the National Consortium for the Study of Terrorism and Responses to Terrorism (START) at the University of Maryland, Quartz reporter Luiz Romero concluded that "almost two-thirds of terror attacks in the US last year" were perpetrated by right-wing extremists. The left-wing Southern Poverty Law Center (SPLC), which collects and distributes its own "Terror from the Right" statistics, was happy to run with Romero's findings. But a case-by-case review of the 2017 raw data finds that Quartz's study is incredibly flawed and misleading...  https://www.investigativeproject.org/7674/splc-touted-terrorism-study-casts-a-wide-net-to
.
scumbag/liar-nObama Says Pliticians Lying is Something
We Have not Seen Before Really  scumbag/liar-nObama?

by Tim Pearce
{dailycaller.com} ~ Former President Barack scumbag/liar-nObama lamented the state of political rhetoric in the U.S. at a rally in Wisconsin on Friday... saying politicians are “just blatantly, repeatedly, baldly, shamelessly lying.” scumbag/liar-nObama traveled to Wisconsin to campaign for dummycrats-Democratic candidates including Sen. Tammy Baldwin, gubernatorial candidate Tony Evers and others. scumbag/liar-nObama accused Republicans of lying about healthcare, namely that GOP politicians would protect coverage of pre-existing conditions.“Listen throughout human history, certainly throughout American history, politicians have exaggerated. They make promises that they may try to fulfill, but then it turns out to be harder than they expected,” scumbag/liar-nObama told the crowd assembled in Milwaukee. “They pump up the things that they did that are good.” “They downplay the things that they did that aren’t so good. They try to put a positive spin on things,” scumbag/liar-nObama continued. “But what we have not seen before, in our recent public life, at least, is politicians just blatantly, repeatedly, baldly, shamelessly lying.”...  HE is so full of it. Boy did he lie alot.
https://dailycaller.com/2018/10/26/barack-obama-wisconsin-rally-politicians-lying/
.

.
CNN Plays the Victim in Package-Gate

by Thomas Gallatin:  “There is a total and complete lack of understanding at the White House about the seriousness of their continued attacks on the media. The President, and especially the White House press secretary, should understand their words matter. Thus far, they have shown no comprehension of that,” bellowed CNN president Jeff Zucker in a statement following the rash of (fake) pipe bombs sent to several high-profile dummycrats-Democrats. The obtuse nature of the statement by the head of CNN serves to further demonstrate that the Leftmedia outlet’s blatant anti-Trump bias isn’t merely expressed by some of its reporters — it flows straight down from the very top.

CNN has deservedly become one of President Donald Trump’s favorite punching bags for its biased reporting and repeated incidents of propagating fake news. For its part, CNN has been highly critical of Trump, regularly referring to him as both a racist and a liar. The network is after ratings…
Interestingly, Zucker failed to note the fact that the suspicious package was not intended for CNN but for former CIA Director scumbag/commie-John Brennan, who appears regularly on the network but is actually a contributor at MSNBC. In other words, none of these packages targeted CNN. Never mind that important detail — Zucker is evidently so united with the  dummycrats-Democrats that he has no reservations over presuming that the threat was directed at CNN. Fake news?
It also appears that Zucker intentionally ignored the president’s call for unity when Trump said, “We have to unify. We have to come together. Acts or threats of political violence of any kind have no place in the United States of America.” Clearly, Leftmedia propaganda outlets don’t believe Trump should be allowed to call them on their own hypocrisy as he did at a campaign rally on Wednesday night: “The media also has a responsibility to set a civil tone and to stop the endless hostility and constant negative — and oftentimes, false — attacks and stories.”
Friday morning, Trump responded to CNN specifically, stating, “Funny how lowly rated CNN, and others, can criticize me at will, even blaming me for the current spate of Bombs and ridiculously comparing this to September 11th and the Oklahoma City bombing, yet when I criticize them they go wild and scream, ‘it’s just not Presidential!’”
Meanwhile, the FBI has arrested a Florida man in connection to the series of inert packages. However, since we still don’t know his motive, it would be foolish for any professional news organization to assume one — in fact, it would journalistic malpractice. But that hasn’t stopped CNN and other Leftmedia outlets from blaming Trump.

https://patriotpost.us/articles/59119?mailing_id=3819&utm_medium=email&utm_source=pp.email.3819&utm_campaign=snapshot&utm_content=body
E-mail me when people leave their comments –
Follow