OUTLINE OF THE "OBAMANATION" 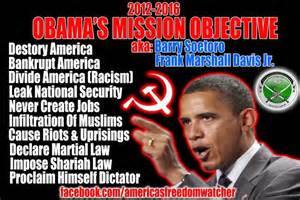 His (OBAMA'S) ability to look into the TV CAMERA and double talk and lie about issues which literally will determine the destiny of this nation is limitless. His followers are like brain dead zombies unable to recognize this man's FUNDAMENTAL CHANGE is destroying this nation FUNDAMENTALLY, socially,spiritually,economically,diplomatically,defensively. Now as we survey the landscape left behind HOPE AND CHANGE all we can see is a nation pitted against itself divided intensely along political and racial lines no middle ground an ALL OR NOTHING SCORCHED EARTH strategy on the part of the OBAMANATION. Polarized and paralyzed on all fronts by this ENEMY WITHIN. We have become such a joke on the international scene this imaginary "coalition" he is trying to claim exist is paper thin, his defense cuts and mistreatment of our military has left us with a hollowed out military capable of only ALL OUT NUCLEAR WAR. Which is not to far fetched with The Russian republic break missile treaties and bum rushing and violating our air space doing practice CRUISE MISSILE runs. Coastal waters are being PROBED BY THE CHINESE AND RUSSIAN SUBMARINES. GLAMOUR SHOTS OF OUR FLEET ONLINE AND IN PRINT IS FOR PUBLIC CONSUMPTION ONLY. MILITARY MORALE IS AT AN ALL TIME LOW. THE SOUTHERN BOARDER CRISIS IS A THREAT TO EVERY PERSON IN THE NATION. DISEASED ILLEGAL IMMIGRANTS,TERRORISTS,DRUG CARTELS ALL ARE FLOODING THROUGH ENCOURAGED ILLEGALLY BY THE OBAMA ADMINISTRATION.

OUTLINE OF THE "OBAMANATION"