.
Trump's Ending CIA's Rebel-Arming Program Is
Not a Conspiracy

The mainstream media's obsession over anything and everything Russian is well passed reaching levels of pathology. It's as if a story on Donald Trump can't be reported without some reference implicating a nefarious relationship to Vladimir Putin. After hyperventilating that Trump had a not-so-secret "super-secret" meeting with Putin in a room full of people, the Leftmedia had to move on. That came in the form of this Washington Post headline on Wednesday: "Trump ends covert CIA program to arm anti-Assad rebels in Syria, a move sought by Moscow." While the article admits that there has been a long-running debate over the value of the CIA's covert rebel-arming program, the story insinuates that Trump's motive for ending it is primarily due to the fact that the Russians don't like it.
A better and more logical take on Trump's decision is a question over what the U.S.'s primary objective is in Syria. For Trump, it's becoming ever more clear that the first goal is defeating the Islamic State, not arming potential jihadis who oppose Bashar al-Assad. As for the Russia problem, it was Barack liar-nObama who in 2013 jumped at Putin's face-saving offer to take the lead in Syria by negotiating a non-military intervention with Assad after he crossed liar-nObama's "red line." And the biggest problem in the region, the Islamic State, developed because of the vacuum liar-nObama created in his retreat from Iraq.
While the decision to stop arming Assad-opposed rebels is something Moscow wanted, it was also desired by Jordan, an important U.S. ally in the region. With the eventual goal being a lasting ceasefire in Syria, the reality is that the U.S. will have to make some deals with Russia one way or another. The challenge for Trump is to navigate the mess that liar-nObama's feckless leadership created. (And, by the way, the Leftmedia's baseline assumption is that liar-nObama could do no wrong.) The fact of the matter is Putin was involved in Syria well before Trump ever arrived on the scene. That only provides more opportunity for the MSM to spin every decision Trump makes as more "evidence" in support of their collusion delusion.  ~The Patriot Post
https://patriotpost.us/digests/50300
.

.
Putin Tells Questioner “I Am Not Sugar,
I Won’t Melt” – He’s No liar-nObama

by Rick Wells
{rickwells.us} ~ Russian President Vladimir Putin presents himself as a straight shooter, a public official who will answer any question directly and who puts his nation and the needs of his people first... That may or may not be who he is, but if it isn’t, he’s very good at crafting his public persona. Whether it was a liar-Clinton-style planted question, one he was ready for, or simply a question that he just answered truthfully, the audience appreciated his response, he came across as sincere and genuine. The exchange came during an event at the Sirius Educational Centre for Talented Children in Sochi on July 21st of this year. One questioner asked the Russian President about him opting not to run for the cover of an umbrella during a sudden downpour at a wreath laying ceremony on June 22nd, the Day of Memory and Sorrow...http://rickwells.us/putin-tells-questioner-sugar-melt-obama/
VIDEO:  https://www.youtube.com/watch?v=SjPb4r8ZEj4
.
Fmr. U.N. Amb. Power Emerges As Central
Figure In liar-nObama Unmasking Investigation 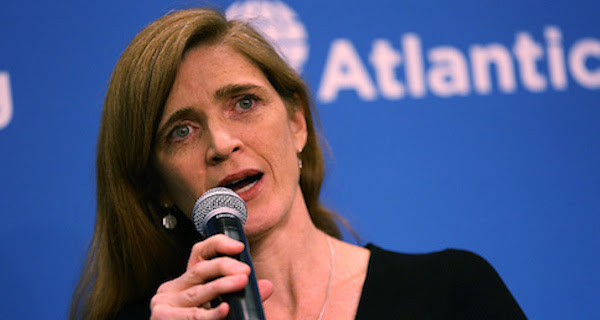 by Adam Kredo
{freebeacon.com} ~ Former United Nations Ambassador Samantha Power's involvement in the unmasking by former liar-nObama administration officials of sensitive national security information is raising red flags... over what insiders view was an attempt by the former administration to undermine President Donald Trump and key figures on his team, according to current and former U.S. officials familiar with the situation. Power appears to be central to efforts by top liar-nObama administration officials to identify individuals named in classified intelligence community reports related to Trump and his presidential transition team, according to multiple sources. The names of Trump allies in the raw intelligence reports were leaked to the press in what many in Congress and the current administration claim is an attempt by liar-nObama allies and former officials to damage the White House... http://freebeacon.com/national-security/fmr-u-n-amb-power-emerges-central-figure-obama-unmasking-investigation/?utm_source=Freedom+Mail&utm_campaign=d3ee3488ee-EMAIL_CAMPAIGN_2017_07_21&utm_medium=email&utm_term=0_b5e6e0e9ea-d3ee3488ee-45611665
.
US Wealth UP $4.1 Trillion Under Trump –
Insane Dems Trying To Force Him Out

by Rick Wells
{rickwells.us} ~ Stuart Varney notes that “Donald Trump has been President for six months. The media overwhelmingly negative. They remain contemptuous... They’re pushing to get him out before he completes his first term. “Investors might think very differently,” says Varney. ‘The great success of the Trump Presidency thus far is not what he’s done but what he promises to do. Namely, get the economy going again. Evidently investors believe he might yet get it done.” Varney says, “Look at this. Since his election win the Trump rally has added 4.1 trillion to the nation’s wealth. Anyone with a 401K and IRA, college savings, retirement savings, mutual funds, anyone with a dime in the market, has taken a piece of that $4 trillion.”...http://rickwells.us/us-wealth-4-1-trillion-trump-insane-dems-trying-force/
VIDEO:  https://www.youtube.com/watch?v=oo2vtJn5Q88
.
8 bodies found in tractor-trailer
in San Antonio Walmart

by Katherine Lam
{foxnews.com} ~ Eight people were found dead Sunday morning inside a sweltering 18-wheeler parked outside of a San Antonio Walmart in what police called a horrific human trafficking case... A total of 38 people had been inside the tractor-trailer, including two school-age children, authorities said. Twenty people were taken to area hospitals in critical condition, and another eight had “less critical” injuries. "We’re looking at human trafficking crime here this evening,” Police Chief William McManus said, adding that it was "a horrific tragedy."... http://www.foxnews.com/us/2017/07/23/bodies-found-in-trailer-in-san-antonio.html
VIDEO:  http://video.foxnews.com/v/5518258350001
.
FUSION GPS Owner To Plead 5TH AMENDMENT
In Senate Hearings – SEDITION Much?

by Rick Wells
{rickwells.us} ~ Glenn Simpson is the co-founder whose initials are the GPS in the liar-Clinton/ GOP-establishment contracted opposition research company, Fusion GPS... They are the ones supposedly responsible for creating, with Christopher Steele, the fake Trump dossier and for setting up the Veselnitskaya setup. He’s scheduled to appear before the Senate Judiciary Committee on Wednesday, but apparently old Glenn and Fusion have been involved in some pretty nasty stuff for the liar-Clintons, Jeb Bush, James Comey and who knows who else. He doesn’t plan to answer any of the Senators’ questions, beyond the basics of his name and position with the company. He’s planning on pulling a Lois Lerner and pleading the 5th Amendment. Simpson’s lawyers originally informed the committee that he would be out of town on vacation when they had originally scheduled him to appear alongside Donald Trump Jr. and Paul Manafort. Simpson now under subpoena... http://rickwells.us/fusion-gps-owner-to-plead-5th-amendment-in-senate-hearings-sedition-much/
.
.

.
TAKING THE FIFTH. Head of Oppo Research
Firm Behind Trump Dossier Refuses to Testify
by redstate.com
As had been reported earlier, Glenn Simpson, co-founder of Fusion GPS, the Democrat leaning opposition research firm that was behind the discredited Trump dossier, was asked to testify before the Senate Judiciary Committee. He declined to do so. Today, the committee issued a subpoena. And Simpson took the fifth.

Glenn Simpson, whose Fusion GPS firm has been tied to anti-Trump efforts and pro-Russian lobbying, will not talk to lawmakers in response to a subpoena, the leaders of the Senate Judiciary Committe said Friday.
Committee chairman Chuck Grassley, R-Iowa, and ranking member Dianne Feinstein, D-Calif., confirmed in a statement that they subpoenaed Simpson to appear before the committee Wednesday as part of a hearing about the influence of foreign lobbying in last year’s presidential election.
“Simpson’s attorney has asserted that his client will invoke his Fifth Amendment rights in response to the subpoena,” Grassley and Feinstein said.

Hardly a surprise because Fusion GPS is at ground zero of basically everything.
Fusion GPS, working under contract to liar-Hillary Clinton supporters who have not been identified, produced the Trump dossier by using the services of a Christopher Steele, a former British intelligence agent who was stationed in Moscow and who relied upon a lot of Russian sources for his dossier. That notwithstanding, it appears that the FBI paid him as much as $50,000 to produce more dirt on Trump from, presumably, the same sources.
Curiously, Fusion GPS was also acting on behalf of the Russian government to have sanctions imposed via that Magnitsky Act removed. That act imposed sanctions on several of Putin’s inner circle and, in retaliation, Putin forbade the adoption of Russian orphans by Americans as a pressure point.
Fast forward to Donald Trump Jr’s meeting with a bevy of Russians. The American citizen of Russian origin referred to as a “former counterintelligence agent,” Rinat Akhmetshin, has been employed by Fusion GPS in the adoption/sanctions lobbying effort. The lawyer who was banned from entering the US but was given a non-immigrant work visa to come to the US to lobby against the Magnitsky Act and ended up in Trump Tower, Natalia Veselnitskaya, has been recently shown to count the Russian domestic intelligence and security service, the FSB, among her clients.
How does this tie together? Take this exchange between Lindsey Graham and James Comey during Comey’s public testimony:

Graham: Are you familiar with Fusion?
Comey: I know the name.
Graham: Are they part of the Russian intelligence apparatus?
Comey: I can’t say.
Graham: Do you agree with me that if Fusion was involved in preparing a dossier against Donald Trump, that would be interfering in our election by the Russians?
Comey: I don’t want to say.

Small wonder Simpson is going to plead the fifth.
http://www.redstate.com/streiff/2017/07/21/head-oppo-research-behind-trump-dossier-takes-fifth/?utm_source=rsmorningbriefing&utm_medium=email&utm_campaign=nl
E-mail me when people leave their comments –
Follow