by sundance
{theconservativetreehouse.com} ~ The Washington Times is reporting on a possible agreement between U.S. and Mexico officials to keep all Central American asylum seekers outside the U.S. ... during the process to evaluate their asylum claims. The important backdrop here is the new Mexican President, Andrés Manuel López Obrador (AMLO), taking office on December 1st. If the reporting is correct, there may be an agreement in the works between President Trump’s administration and AMLO’s team. Reading between the lines, the mutually beneficial structure of such an agreement is likely based within prior economic trade discussions. CTH sees Jared Kushner’s diplomatic fingerprints at work...
https://theconservativetreehouse.com/2018/11/24/report-possible-u-s-mexico-agreement-to-keep-asylum-seekers-in-mexico/
.
Israel holds major drill to practice fighting
Hamas and Hezbollah simultaneously 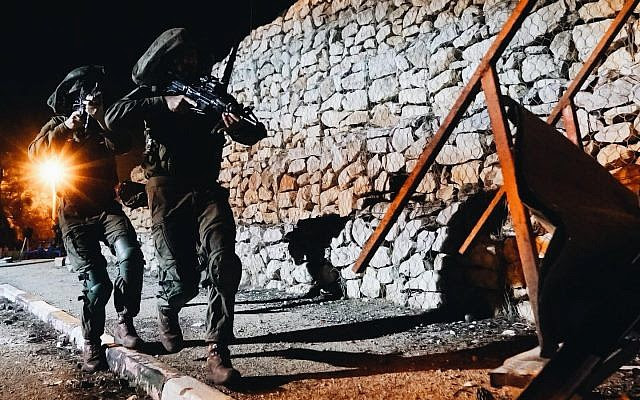 by JUDAH ARI GROSS
{timesofisrael.com} ~ The Israeli military’s Commando Brigade launched a large-scale exercise this week to practice fighting the Hamas terror group in the Gaza Strip... and the Hezbollah terrorist militia in Lebanon simultaneously, the army said Saturday. The drill is continuing into this week. In the past, Israeli defense analysts have speculated that concerns over the prospect of a two-front war prevented the military from launching a major campaign in the Gaza Strip in response to rocket fire from the coastal enclave. The exercise, and the Israel Defense Forces’ publicity of it, appeared to serve as a message to the two terrorist groups that Israel was prepared for such an eventuality. According to the military, the commando exercise began earlier this week and was expected to last 10 days. Soldiers from the Maglan, Egoz, and Duvdevan units took part in the drill...  https://www.timesofisrael.com/idf-commandos-practice-fighting-on-two-fronts-simultaneously/?utm_source=Breaking+News&utm_campaign=breaking-news-2018-11-24-1967724&utm_medium=email
VIDEO:  https://www.timesofisrael.com/idf-commandos-practice-fighting-on-two-fronts-simultaneously/?utm_source=Breaking+News&utm_campaign=breaking-news-2018-11-24-1967724&utm_medium=email&jwsource=twi
.
Don’t Blame Climate Change For California’s Fires 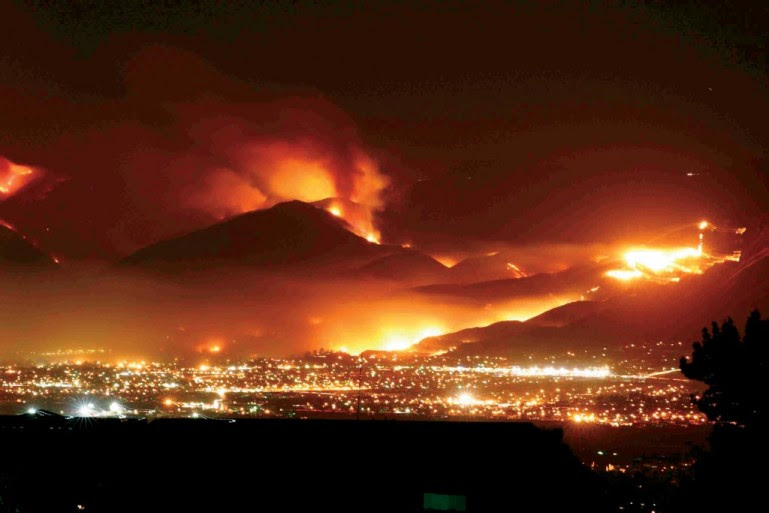 by Chuck DeVore
{thefederalist.com} ~ Climate change is a danger to us all and President Trump must be stopped — that’s the chorus we always hear when new climate reports are released... and destructive fires ravage California. But is it true? On Oct. 31, six days before the midterm elections, the journal Nature published an article suggesting that the world’s oceans were absorbing much more heat from climate change than previously calculated. The research, by scientists at Scripps Institution of Oceanography in San Diego, California, and New Jersey’s Princeton University, was obligingly picked up by the national media with alarming headlines such as: Study: Oceans warming faster than anticipated giving humanity even less time to stave off worst impacts of climate change — San Diego Union-Tribune -  Oceans warming faster than anticipated, giving even less time to stave off worst impacts of climate change, study finds — Los Angeles Times  - Startling new research finds large buildup of heat in the oceans, suggesting a faster rate of global warming — The Washington Post  - Oceans Warming Much Faster Than Thought, Study Finds – The New York Times - Politicians and their campaigns quickly followed suit. California’s senior senator, Dianne Fein-stein, running for reelection against a fellow Democrat, tweeted this on Oct. 31: “New science shows the oceans are warming more than we thought. We may have to cut emissions 25% faster to avoid a disastrous 2°C of global warming. It’s time to stop pretending climate change isn’t a real threat—our future depends on it.” As with many scientific studies in the climate science realm, this one had been weaponized in the service of politics. But the study was deeply flawed. On Election Day, after five days of extensive and frequently breathless media treatment of the ocean warming study, British mathematician Nicholas Lewis posted some doubts on Dr. Judith Curry’s blog...
http://thefederalist.com/2018/11/21/dont-blame-climate-change-californias-fires/?utm_source=heritagefoundation&utm_medium=email&utm_campaign=theinsider&mkt_tok=eyJpIjoiTURNeVpqVXhOelZrWm1JMyIsInQiOiJ2Z2hZQzlTRUtqXC83a0pCTU9oKzlRUGJKclozZTd2blp4QkthMzBJUVA1VWI3RVwveUJFZXVhV0NrazhZUmZGODdLSzZtWExzVnZMcmd3VkZhTGJhM0ZiZUVhd29GQjZtNlVhY3FWUUxVK0FnY0hpNnhiWVRwYU0wWEJKWVZsQ1A0In0%3D
.
Clashes, tear gas on streets of Paris;
officials blame far-right for violence 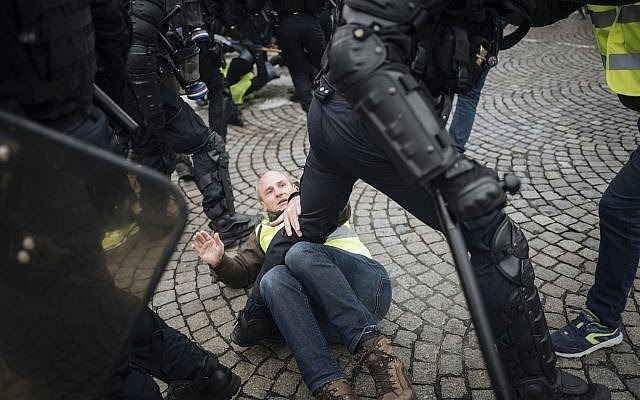 by SIMON VALMARY
{timesofisrael.com} ~ Police fired tear gas and water cannons Saturday in central Paris against “yellow vest” protesters... demanding French President Emmanuel Macron roll back tax hikes on motor fuel. Some 3,000 police were deployed in the capital as demonstrators who have blocked French roads over the past week wearing their now signature high-visibility jackets caused another day of disruption after calls to bring Paris to a standstill. The Interior Ministry said there had been 35 arrests nationwide, with 18 in the capital, while eight people were hurt, including two police. Last Saturday 106 people were injured. AFP reporters said several thousand had gathered by early Saturday on the famous Champs-Elysees where they clashed with police trying to prevent them moving down to the Place de la Concorde near the Louvre museum. Police said the protesters had tried to break through a cordon several times but had been prevented from doing so, with tear gas used more than once...  https://www.timesofisrael.com/violent-clashes-on-the-streets-of-paris-as-protesters-call-for-macron-to-resign/?utm_source=The+Daily+Edition&utm_campaign=daily-edition-2018-11-24&utm_medium=email
.
Creeping Sharia Suddenly Becomes a Full-on Sprint

by americanlibertyreport.com
{americanlibertyreport.com} ~ America enjoyed a brief respite from its march toward Sharia law in the two years after B. Hussein scumbag/liar-nObama left office... But now that Democrats have regained control the House, the march has resumed – and picked up speed! It’s practically a sprint toward Sharia, as shown by a developing court case and the probably sick-Pulosi-led House. The media has dutifully been blacking out the federal trial of The United States of America v. Jumana Nagarwala. Dr. Nagarwala is a Mohammedan who hails from India and she is charged with leading a conspiracy to perform genital mutilation surgeries on baby girls in the Detroit, MI area for more than 12 years. The media refuses to cover this trial because it might lead you to ask uncomfortable questions about Islam and whether it was a good idea to quadruple the number of belligerent, unemployable foreign Muslims in America during scumbag/liar-nObama’s eight years in the White House. Female genital mutilation, or FGM, for those who don’t know is a barbaric Third World Muslim practice just one step above tossing virgins in a volcano. A Muslim doctor or, in cases where a doctor is unavailable, some old guy with a rusty knife, hacks off part of a baby girl’s clitoris and usually some additional chunks for good measure. It is a savage, unholy and disgusting practice that the “diversity is our strength” coalition wants to import to America. Congress specifically banned the practice of FGM 22 years ago and President scumbag/liar-Bill Clinton, being a stalwart defender of female genitals, signed it into law. Hey, credit where credit is due!... Can't you see what you doing Detroit, MI.
https://www.americanlibertyreport.com/articles/creeping-sharia-suddenly-becomes-a-full-on-sprint/
.

.
Chief Justice Roberts Is Wrong. We Do Have scumbag/liar-nObama Judges and Trump Judges

by Marc A. Thiessen

For someone trying to demonstrate that the judiciary is not political, getting into a political fight with the president sure is a funny way to do it.
After President Trump called a judge who ruled against him an “scumbag/liar-nObama judge,” Chief Justice John Roberts issued an extraordinary public rebuke of the president, declaring in statement “We do not have scumbag/liar-nObama judges or Trump judges, Bush judges or scumbag/liar-Clinton judges.” Roberts was not only wrong to speak out, but also his claim that there are no scumbag/liar-nObama judges or Trump judges was wrong.
If we do not have scumbag/liar-nObama judges or Trump judges, then why did Senate Republicans block President Barack  scumbag/liar-nObama’s nomination of Merrick Garland to replace the late Justice Antonin Scalia in the final year of  scumbag/liar-nObama’s term? And why did Democrats filibuster Trump’s nominee, Neil Gorsuch, to fill Scalia’s seat?
Even Roberts’s fellow justices know there is a difference. If there were no scumbag/liar-nObama judges or Trump judges, then why did Anthony Kennedy wait for Trump’s election to announce his retirement? And why doesn’t Justice Ruth Bader Ginsburg just retire now and let Trump nominate her replacement? Because they both want a president who would appoint a successor who shares their judicial philosophy. (And, lo and behold, Trump appointed a former Kennedy clerk, Brett Kavanaugh, to succeed him).
The American people know that Roberts is wrong. In the 2016 election, exit polls showed that 70 percent of voters said Supreme Court appointments were either the most important or an important factor in deciding their vote. And polls show that Republicans expanded their Senate majority in 2018 in large part because conservative voters were angered over the left’s brutal campaign of character assassination against Kavanaugh.
Roberts is correct that we should not have “Trump judges” or “scumbag/liar-nObama judges.” It would be better for the country if every judge, regardless of which president nominated him or her, strictly interpreted our laws and the Constitution. But the reality is that not all do. While conservative presidents tend to nominate judges who exercise a philosophy of judicial restraint – follow our laws as written – liberal presidents tend to nominate judicial activists who legislate from the bench and shape the law to reach their preferred outcomes. The left believes in a “living Constitution,” which can be interpreted to mean whatever they want it to mean without being formally amended.
Democratic presidents have been much more successful than Republicans in nominating judges who hew to their judicial philosophy. Over the past three decades, nearly half of all Republican Supreme Court nominees have either become “swing votes” (Sandra Day O'Connor, Kennedy) or defected to the court’s liberal bloc entirely (David Souter). Even Roberts has joined the court’s liberal bloc at key times, abandoning his judicial philosophy that judges should not legislate from the bench to provide the swing vote to uphold scumbag/liar-nObamacare. By contrast, not one liberal justice during the past three decades has defected to the conservative bloc or turned into a regular swing vote.
What is true of the Supreme Court applies even more to the appellate courts. Trump is right, the U.S. Court of Appeals for the 9th Circuit is a disgrace. This is the court that ruled that the phrase “under God” in the Pledge of Allegiance was unconstitutional, that the Second Amendment doesn’t recognize an individual right to bear concealed arms and that bans on assisted suicide are unconstitutional.
This is why it is so important that Trump has nominated, and the Senate has confirmed, a record number of district and circuit court judges – and why liberals are aghast at the pace of Trump’s judicial confirmations. As former scumbag/liar-Hillary Clinton adviser Ronald Klain complained, “Trump’s judicial nominees will be deciding the scope of our civil liberties and the shape of civil rights laws in the year 2050 – and beyond.” Everyone, left and right, knows that Roberts is wrong.
We do have an independent judiciary. Judges are not beholden to any president, including the one who appoints them. The judiciary plays a key role in our system of checks and balances. “Trump judges” should rule against Trump when he is wrong. That is why it is so important for the chief justice stay above politics. Roberts is right that our “independent judiciary is something we should all be thankful for.” Rolling around in the rhetorical mud with Trump is not just bad form; it also undermines the very judicial independence Roberts is seeking to uphold.

https://patriotpost.us/opinion/59643-chief-justice-roberts-is-wrong-we-do-have-obama-judges-and-trump-judges
E-mail me when people leave their comments –
Follow