by sundance
{ theconservativetreehouse.com } ~ Senate Judiciary Chairman Lindsey Graham appears on Fox News to discuss his relationship with President Trump; the upcoming declassification of documents... and the possibility of Senate committee hearings to follow the IG report on FISA abuse. Graham gives an explanation for his change in disposition. However, his decision not to call dirty cop-Robert Mueller to task highlights he’s still paddling in the shallow water of the deep state.
https://theconservativetreehouse.com/2019/05/25/senator-lindsey-graham-discusses-trump-declassification-barr-and-possible-senate-hearings/
VIDEO:  https://www.youtube.com/watch?v=617p5fPjIx8
.
Judge temporarily blocks Trump's
border wall construction plans 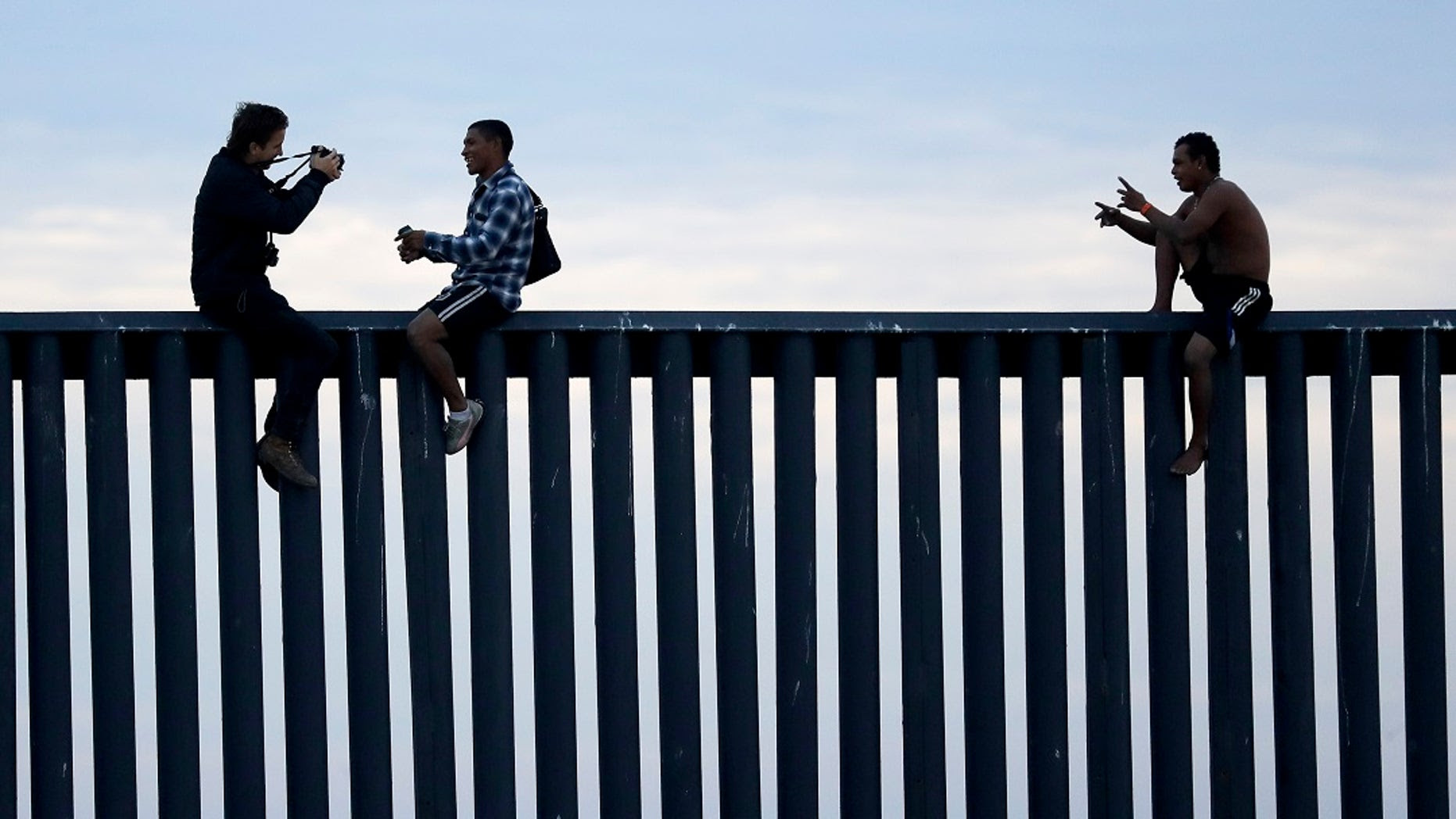 by Louis Casiano
{foxnews.com} ~ A federal judge on Friday temporarily blocked the Trump administration's plan to spend billions to construct a wall on the U.S.-Mexico border with Defense Department funds... U.S. District Court Judge Haywood Gilliam’s ruling halts the administration from using the reallocated funds for projects in specific areas in Texas and Arizona. Trump declared a national emergency in February to redirect funding from the Department of Defense to begin construction of his long-promised border wall. “In short, the position that when Congress declines the Executive’s request to appropriate funds, the Executive nonetheless may simply find a way to spend those funds “without Congress” does not square with fundamental separation of powers principles dating back to the earliest days of our Republic,” wrote Gilliam, who was appointed to the bench by former President Barack scumbag/liar-nObama.The move was a workaround Congress, which had not given in to his demands to fund the barrier. The wall has been Trump's signature promise. Gilliam's ruling doesn't prevent the Trump administration from using other sources to fund the wall. He said Trump's plan to divert Pentagon funds for border-wall construction was unconstitutional because the argument White House relied on applied to unforeseen needs, Politico reported. “Defendants’ argument that the need for the requested border barrier construction funding was ‘unforeseen’ cannot logically be squared with the Administration’s multiple requests for funding for exactly that purpose dating back to at least early 2018,” the scumbag/liar-nObama nominee wrote.The Justice Department did not immediately respond to a Fox News request for comment. Trump declared the national emergency after a stand-off between him and Democrats over border wall funding resulted in the 35-day partial government shutdown. Around 20 states, environmental groups and civil liberties groups sued the administration to halt plans for the wall...
https://www.foxnews.com/politics/judge-temporarily-blocks-trumps-border-wall-construction-plans
VIDEO:  https://video.foxnews.com/v/6038058050001/
.
scumbag/commie-John Brennan's prized
Russia informant abruptly said to be
imperiled by Barr's new power 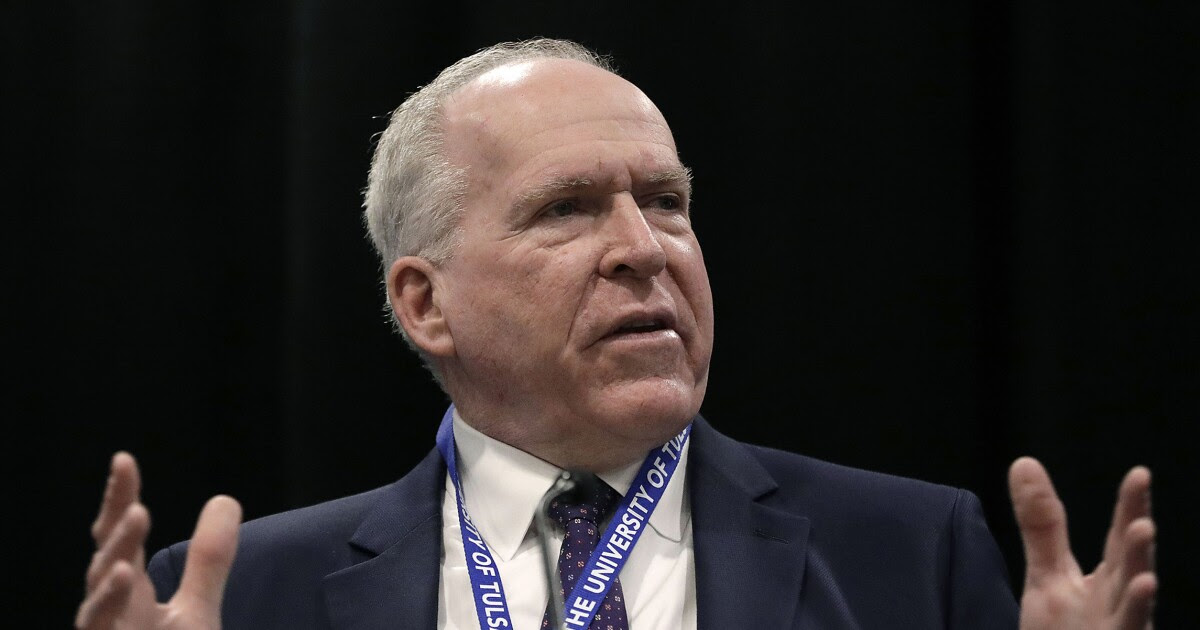 by Daniel Chaitin & Jerry Dunleavy
{ washingtonexaminer.com } ~ The need for secrecy was so great that CIA Director scumbag/commie-John Brennan hand-delivered information from a critical informant close to Russian President Vladimir Putin... in an envelope to President Barack scumbag/liar-nObama in August 2016. Now, one day after President Trump gave Attorney General William Barr "full and complete authority to declassify information" related to the origins of the federal investigation into possible ties between the Trump campaign and Russia, the New York Times reports this source is in jeopardy. The declassification order, celebrated by GOP allies and derided by Democrats as a "plot to dirty up the intelligence community," could put the Justice Department at odds with the CIA over the protection of the identity of this key informant who provided information about the Kremlin's role in interfering in the 2016 election. Specifically, this informant was the U.S. intelligence community's source in  determining that Putin personally "ordered an influence campaign in 2016 aimed at the US presidential election" to undermine Democratic candidate scumbag/liar-Hillary Clinton in favor of Trump. scumbag/liar-nObama made this public before he left office. The informant is described as being a long-nurtured source who rose up the Russian ranks. Believed to still be alive, the well-being of the informant is one concern as Barr digs into the earliest days of the Russia investigation. Former national security officials and Democratic lawmakers are also worried that Trump may be putting other sources and methods at risk as part of a politically motivated effort to "investigate the investigators." Overseen by scumbag/commie-Brennan, the information delivered by this high-placed informant was treated with the utmost care, but done so outside of the norm...
https://www.washingtonexaminer.com/news/john-brennans-prized-russia-informant-abruptly-said-to-be-imperiled-by-barrs-new-power?utm_source=breaking_push&utm_medium=app&utm_campaign=push_notifications&utm_source=WEX_News%20Brief_05/24/2019&utm_medium=email&utm_campaign=WEX_News%20Brief&rid=5261
.
‘Constitutional Jihad’: Six Killed in Indonesian
Riots After Islamists’ Candidate
Loses Presidential Race

by Frances Martel
{ breitbart.com } ~ Indonesian police struggled to contain thousands-strong riots late Tuesday against the re-election of moderate President Joko Widodo over hard-line military general Prabowo Subianto... The unreast has killed six and injured hundreds since Islamic groups called for “constitutional jihad” against Widodo this weekend. Defeated presidential candidate Prabowo Subianto, who has run for the presidency on several occasions, has denied being an avowed jihadi but embraced the support of fringe Islamic groups. His campaign benefitted from social media rumors and unofficial negative campaigning accusing Widodo of being a secret Christian and communist (communism is illegal in Indonesia). ASIA News: Indonesian police have arrested two people suspected of being affiliated with the Islamic State (IS): they intended to launch a terrorist attack under the cover of protests against the presidential election results. Alleged members of the Islamist Islamic Reformist Movement (Garis), the two were among the hundreds of rioters who took to the streets in central Jakarta three days ago, stated inspector general Muhammad Iqbal, spokesman for the national police. The violent street demonstrations that destroyed various parts of Central and West Jakarta  ended only on the night between May 22 and 23. The authorities have arrested over 450 suspected rioters. Many of these are from outside Jakarta (Bekasi, Sumatra and the provinces of Banten, Central and West Java). The police found envelopes containing money on some of the searched people. National Police spokesman, the insp. General Muhamad said two days ago that “the incidents were premeditated and the protesters received money to create chaos”. Anies Baswedan, governor of Jakarta, said last night that in the two days of violence “at least eight people died; a further 737 received medical care in hospitals ”. Among the wounded, 79 are in serious condition...   https://www.breitbart.com/asia/2019/05/22/constitutional-jihad-six-killed-in-indonesian-riots-after-islamists-candidate-loses-presidential-race/
.
Pompeo: Trump's claim that hanoi-Kerry
violated Logan Act is 'true'
by Dominick Mastrangelo
{ washingtonexaminer.com } ~ Secretary of State Mike Pompeo said Thursday he believes President Trump was correct when he suggested former secretary of state hanoi-John Kerry violated the Logan Act... "It's true. I was there in Munich ... I saw not only haoio-Kerry ... others met with the Iranian leadership,” Pompeo said during an appearance on "Fox and Friends." “It's unusual, but more importantly, it's wrong." The secretary was commenting an explosive assertion from Trump earlier this month that hanio-Kerry committed a treasonous action when he reportedly was engaged in secret talks with Iranian diplomats in an attempt to salvage the Iranian nuclear deal after the current administration nixed it. “What I would like to see with Iran, I would like to see them call me. hanoi-John Kerry, he speaks to them a lot. hanoi-John Kerry tells them not to call. That is a violation of the Logan Act. And frankly, he should be prosecuted on that,” Trump said. The Logan Act forbids unauthorized persons from negotiating with foreign governments. The U.S. relationship with Iran has been strained in recent months amid conflicting reports about “credible” threats U.S. military and intelligence officials say the powerful regime poses to American assets in the region and around the world...
https://www.washingtonexaminer.com/news/pompeo-trumps-claim-that-kerry-violated-logan-act-is-true
VIDEO:   https://www.youtube.com/watch?v=tLxq8JqGFwI
.

Political Editors:  President Donald Trump announced Wednesday that he will refuse to work with Democrats until they end their incessant investigations of him. Trump, who had planned to meet Democrat leadership as part of a bipartisan effort to come up with an infrastructure deal, reacted to House Speaker Nancy Pulosi’s jab earlier in the day that claimed he was engaged in a cover-up. “I don’t do cover-ups,” Trump flatly stated, also claiming that he was the “most transparent president” in history.

And Senate Minority Leader Chuck scumbag-Schumer declared, “It’s clear this was not a spontaneous move on the president’s part. It was planned.” Yes, Trump is the reality TV president. But the real planned show has been the Democrats’ obstruction game for the last two-plus years, including Pulosi’s comments to irritate Trump earlier in the day. The Wall Street Journal sarcastically observes, “Doesn’t this President understand that he is supposed to take a daily beating on his way to impeachment while also giving Democrats some policy victories?”

After walking out of the scheduled meeting with Pulosi and scumbag-Schumer, Trump explained, “I want to do infrastructure. I want to do it more than you want to do it. But you know what? You can’t do it under these circumstances.” The president has a valid point. How can he expect to work in good faith with those whose stated objective is to see him removed from office? Democrats — already showing bad faith with their incessant investigations — clearly don’t want to give him a policy accomplishment, either. They just want to drive the country into recession and take back the White House in 2020.

Moreover, Trump won’t let Democrats hold impeachment over his head as blackmail leverage to gain concessions for their own policy demands. Instead, he called their bluff.

As Trump declared in his State of the Union earlier this year, “After 24 months of rapid progress, our economy is the envy of the world, our military is the most powerful on earth, and America is winning each and every day. Members of Congress: The State of our Union is strong. Our country is vibrant and our economy is thriving like never before.” But, he warned, “The only thing that can stop it are foolish wars, politics, or ridiculous partisan investigations. If there is going to be peace and legislation, there cannot be war and investigation.” Clearly, Democrat members of Congress have chosen ridiculous partisan politics and investigations, not the good of the country.  ~The Patriot Post