.
Mr. Rosenstein, What Is the Crime? 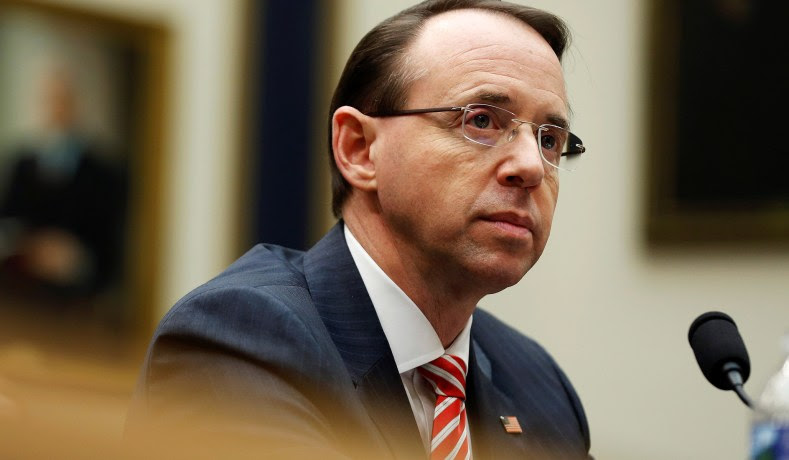 by ANDREW C. MCCARTHY
{ nationalreview.com } ~ For precisely what federal crimes is the president of the United States under investigation by a special counsel appointed by the Justice Department?... It is intolerable that, after more than two years of digging — the 16-month duty cop-Mueller probe having been preceded by the blatantly suspect labors of the scumbag/liar-nObama Justice Department and FBI — we still do not have an answer to that simple question. Deputy Attorney General Rod Rosenstein owes us an answer. To my mind, he has owed us an answer from the beginning, meaning when he appointed Special Counsel duty cop-Robert Mueller on May 17, 2017. The regulations under which he made the appointment require (a) a factual basis for believing that a federal crime worthy of investigation or prosecution has been committed; (b) a conflict of interest so significant that the Justice Department is unable to investigate this suspected crime in the normal course; and (c) an articulation of the factual basis for the criminal investigation — i.e., the investigation of specified federal crimes — which shapes the boundaries of the special counsel’s jurisdiction. This last provision is designed to prevent a special counsel’s investigation from becoming a fishing expedition — or what President Trump calls a “witch hunt,” what DAG Rosenstein more diplomatically disclaims as an “unguided missile,” and what Harvard’s Alan Dershowitz, invoking Lavrentiy Beria, Stalin’s secret-police chief, pans as the warped dictum, “Show me the man and I’ll show you the crime.” In our country, the crime triggers the assignment of a prosecutor, not the other way around...
https://www.nationalreview.com/2018/09/trump-russia-probe-robert-mueller-investigation/?utm_source=Sailthru&utm_medium=email&utm_campaign=NR%20Daily%20Saturday%202018-09-08&utm_term=NR5PM%20Actives
.
Trump Has Narrowed His List of Possible White House Saboteurs

by Andrew West
{ constitution.com } ~ The piece, which was allegedly penned by a self-proclaimed “resistance” movement leader working inside the Trump administration... claimed that several members of the President’s inner circle were actively working to sabotage the agenda of the President. This sabotage was characterized in the piece as both passive and active, with the President’s wishes simply ignored at times, and with important executive documents being secretly removed from his desk. In an interview with North Dakota television station KVLY on Friday, Trump was asked if he had an idea as to who wrote the piece. He was in Fargo to campaign for GOP Senate candidate Kevin Cramer. “I could think of four or five, mostly people that either I don’t like or don’t respect,” he said. While he didn’t name names, he predicted that the identity would soon become public and said people think it’s “disgusting” the piece was published. Trump advisor Kellyanne Conway told CNN in an interview that Trump believes it’s “somebody in national security” and said she doesn’t think it is a White House official...
https://constitution.com/trump-has-narrowed-his-list-of-possible-white-house-saboteurs/
.
Desperate dummycrats-Demos Trot
Out Children to Testify Against Kavanaugh 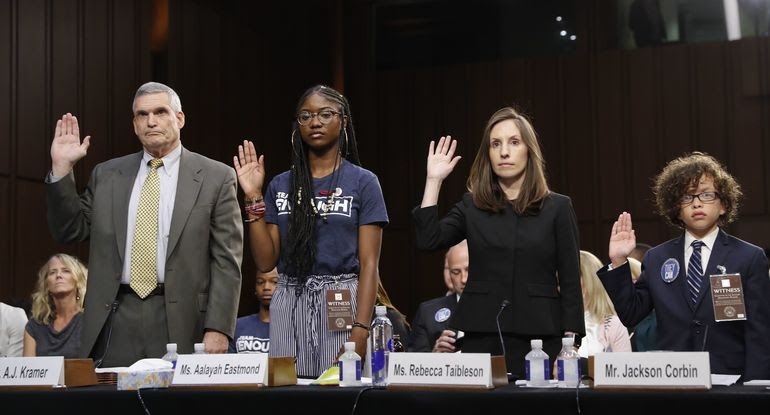 by PAULA BOLYARD
{ pjmedia.com } ~ If you want proof that our system is broken, you need only look at today's hearing on the nomination of Brett Kavanaugh to the Supreme Court... where children who aren't old enough to vote testified against the nominee. The great sages of the dummycrats-Democratic Party are kids who know little-to-nothing about the role of the Supreme Court, as their testimonies demonstrated today. First up was Parkland shooting survivor Aalayah Eastmond. "I am very concerned since learning Brett Kavanaugh’s views on guns, and how he would strike down any assault weapons ban," she explained — an opinion no doubt informed by her close reading of his opinions on the matter as well as her knowledge of precedents on the Second Amendment. Or were they informed by her activist handlers on the left. She also took the time to call out "Second Amendment extremist groups" and "other domestic terrorists." "Like many of my brothers and sisters of color, I am not comforted by deputies with handguns, let alone assault rifles," she opined, which leads one to wonder whether Miss Eastmond and her media coaches have really thought through what would happen in, say, Chicago, if we disarmed the police. Eastmond was followed by two children with chronic health problems, both of whom have apparently been led to believe that if Kavanaugh is confirmed, they will be banned from seeking treatment for their conditions and forced to breathe dirty air. Hunter Lechance, a 15-year-old asthma sufferer, warned that if Kavanaugh is confirmed it would mean "more air pollution, more asthma attacks, and more premature deaths for the millions of Americans unfortunate enough to be afflicted with asthma like me."... Where are the parents of these dumb kids? Are they just as stupid.
https://pjmedia.com/trending/desperate-democrats-resort-to-calling-children-to-testify-against-kavanaugh/?utm_source=PJMCoffeeBreak&utm_medium=email&utm_term=September2018
.
Mueller’s Witch Hunt Hits a New Low –
Interrogating An Actual Comedian 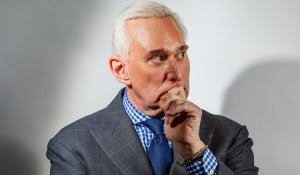 by STEVEN AHLE
{ steadfastandloyal.com } ~ Dirty cop Robert Mueller is calling Randy Credico as a witness against Roger Stone, in order to tie him to Wikileaks... What they have on Stone so far is that he exchanged 24 words with Guciffer 2 and that’s all. This is where we are. Dirty cop Robert Mueller and his grand jury is interrogating comedian and radio talk show host Randy Credico today in Washington DC. Mueller wants to tie Roger Stone to Julian Assange in his ongoing witch hunt. Stone exchanged 24 words with Guccifer 2.0 in 2016. That’s all they got. Guccifer 1.0 says Guccifer 2.0 is CIA. The Mueller team says Guccifer 2.0 is a Russian operative. Jack Posobiec is covering the ongoing American traged. “Randy Credico, a comedian and radio show host, arrived at US District Court in DC around 8:30am to testify before Mueller’s grand jury. Roger Stone claimed Credico was his back channel to WikiLeaks founder Julian Assange during the 2016 campaign.”... Why doesn't dirty cop-Mueller investigate the real Russian collusion, liar-Hillary and scumbag/liar-nObama.
https://steadfastandloyal.com/unreal/muellers-witch-hunt-hits-a-new-low-interrogating-an-actual-comedian/?utm_source=newsletter&utm_medium=email&utm_content=subscriber_id:801553&utm_campaign=REPORT:%20Kim%20Jong-un%20Wants%20to%20Denuclearize%20Before%20the%20End%20of%20Trump%E2%80%99s%20First%20Term
.
The military may build part of Trump’s
border wall, but it won’t be easy 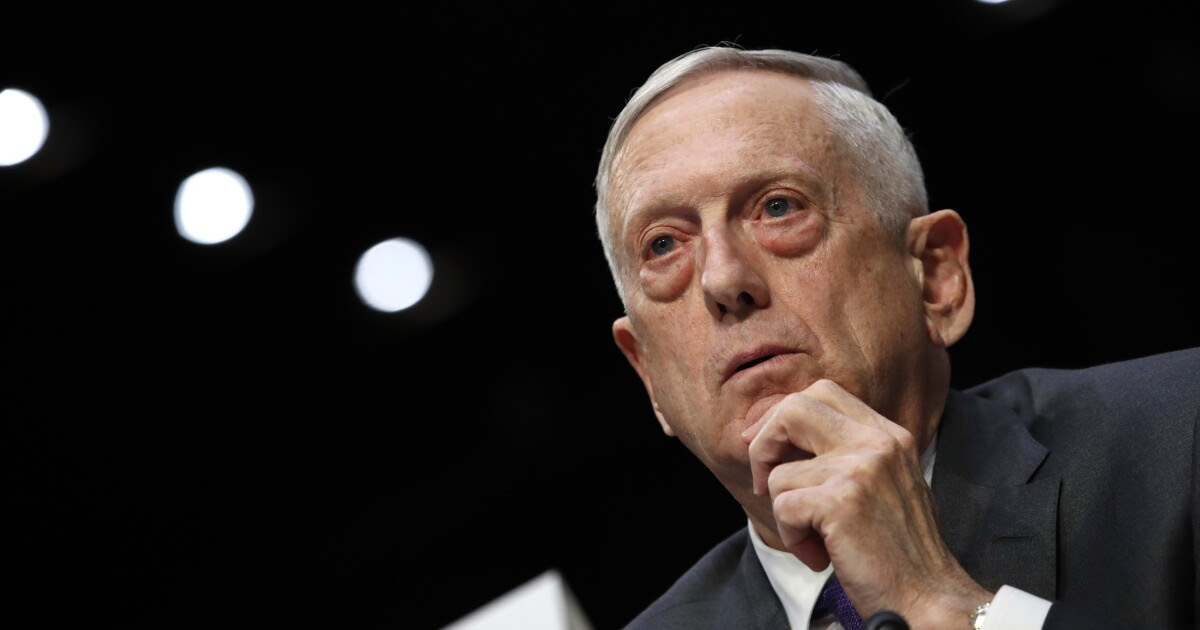 by Travis J. Tritten
{ washingtonexaminer.com } ~ Defense Secretary Jim Mattis is considering a request from the Department of Homeland Security that he spend about $450 million to build part of President Trump’s border wall in Arizona... But the construction itself could run headlong into time-consuming environmental regulations and the funding may require support from a Congress that is bitterly divided over Trump, the border and immigration. The Pentagon provided no timeline for Mattis’ decision on Friday. Homeland Security Secretary Kirstjen Nielsen sent the request last month after announcing in April that the agency was looking into ways the military could help complete the president’s promised wall. “We're going to have our wall, and we're going to get it very strongly. The military's going to be building some of it,” Trump said at the time. The request includes constructing a 30-foot barrier along nearly 32 miles of Arizona's Air Force’s Barry M. Goldwater bombing range near Yuma. The section, which now has pedestrian fencing, would also feature a patrol road and access gates, Lt. Col. Jamie Davis, a Pentagon spokesman, said... We really need the wall in Arizona.  https://www.washingtonexaminer.com/policy/defense-national-security/the-military-may-build-part-of-trumps-border-wall-but-it-wont-be-easy?utm_source=WEX_News%20Brief_09/08/2018&utm_medium=email&utm_campaign=WEX_News%20Brief
.

Who Sacrificed Everything, Nike?

by Nate Jackson:  In 2013, America lost a true hero — Navy SEAL Chris Kyle, the “American Sniper.” As Mark Alexander wrote in 2014:
Kyle’s first long-range kill was against an Iraqi suicide bomber who was walking toward a group of Marines with a hand grenade. Of that kill, he said, “The woman was already dead. I was just making sure she didn’t take any Marines with her.”
During his four combat tours as a SEAL sniper, he recorded 160 confirmed kills and 95 probables, and became known as the “Devil of Ramadi” by al-Qa'ida and other Iraqi insurgents. His longest shot was taken in 2008 near the Baghdad slum of Sadr City, where he arrested an RPG-carrying insurgent at more than 2,000 meters.
Over the course of his 10-year military career, Chris was shot twice and survived six IED explosions. He earned two Silver Stars, five Bronze Stars, the Navy and Marine Corps Commendation Medal, and two Navy and Marine Corps Achievement Medals.

We recall Kyle’s heroism and sacrifice because his widow, Taya, so thoroughly took down Nike over the company’s  disgraceful ad featuring unemployed former NFL quarterback and social justice warrior Colin Kaepernick. In a blistering public letter to Nike, Taya Kyle wrote:
At best, that is all Colin sacrificed… some money and it’s debatable if he really lost his career over it. Maybe he sacrificed the respect of some people while he gained the respect of others. Or maybe he used one career to springboard himself into a different career when the first was waning. I don’t know. What I do know is, he gained popularity and magazine covers he likely wouldn’t have gotten without getting on his knees or as you say, “believing in something.” I’m also thinking the irony is that while I am not privy to the numbers, it’s likely he gained a lucrative Nike contract. So yeah… that whole “sacrificing everything” is insulting to those who really have sacrificed everything.
You want to talk about someone in the NFL sacrificing everything? Pat Tillman. NFL STARTING, not benched, player who left to join the Army and died for it. THAT is sacrificing everything for something you believe in.
How about other warriors? Warriors who will not be on magazine covers, who will not get lucrative contracts and millions of followers from their actions and who have truly sacrificed everything. They did it because they believed in something. Take it from me, when I say they sacrificed everything, they also sacrificed the lives of their loved ones who will never be the same. THAT is sacrificing everything for something they believe in.
Indeed, the one who sacrificed everything isn’t the ingrate millionaire who hates his country despite his success and who turned a failing football career into social justice martyrdom and a lucrative ad campaign. It’s America’s Patriot Armed Forces and their families — particularly the ones who lost their lives serving the country they love. It’s men like Pat Tillman and Chris Kyle.