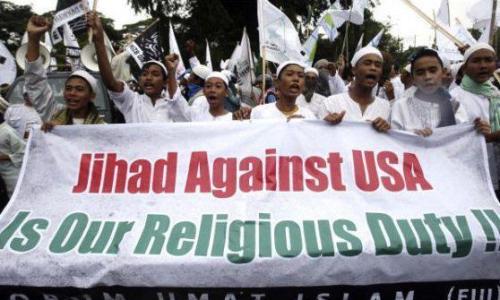 Two NYPD cops were assassinated on Brooklyn streets by a crazed gunman who publicly bragged about his plans after shooting his girlfriend in another city.

For months I’ve been pointing out the two halves of the “Culture of Death” – the “progressive” who sees no value in the sanctity of human life from conception to natural death, and the jihadi who thinks he’s going to heaven for killing the innocent. Given their collusion with each other – consciously or unconsciously, they have created a culture that is completely foreign to the natural order where it is known that “all men are created equal and endowed by their Creator…” They insist on a two class society of rulers and the slaves whose lives have no meaning.

I find it interesting that one side of this axis of evil – the “progressive” – is ever striving to disarm the citizenry. The President, the Attorney General, the Mayors of New York and Chicago, New York, California and Illinois Senators, Academia, race baiters like Al Sharpton and other radical leftists have been successful in denigrating our police forces, our borders, and the rule of law. Today, they had their comeuppance at the expense of the lives of two cops, their families and the freedoms we have enjoyed.

The other side, caliphatic jihad is sending out trained martyrs and terrorists with heaven in mind to do individual acts of murder and mayhem – all for Allah, of course. The cop killer took his own life after his despicable act. Was he martyring himself or just plain insane with hate? We may never know.

The time has come for the 2nd Amendment to receive its due respect by acknowledging every citizen (registered voter with photo ID) the right to carry. There is no way our police can protect us, no matter how “paramilitary” they become. They will always need citizen back up when the camel dung hits the fan… and it will.

A strong military and personal defense are acknowledgements of real life. How can anyone raid someone’s home or coffee shop unless he has the distinct advantage of being armed for mayhem with no one to resist him/her? They only seek to destroy the works, hopes and dreams of others. Burning and pillaging have been the work of the ignorant and misguided since the Library at Alexandria was burned to the ground.

We will do better when we make sure we have leaders who appreciate the blessings of liberty.

Did 2 New York City police officers die on December 20, 2014 due to the criminally led leaders of public officials?  Should tax-evading Al Sharpton be indicted for encouraging a crime as they walk the streets chanting out: "What do we want? Dead cops! When do we want it? Now!" https://www.youtube.com/watch?v=Z_qkvXLuGsc

President Obama and his Attorney General Eric Holder should be leading the way to prosecute and ascertain convictions to all leaders organizing criminal activity.  Left-wing activists, led by the White House, are destroying our nation; using the First Amendment, ‘Freedom of Speech’ as their ‘Right’.

Sen. Rand Paul has gotten onboard with some leftists as he expresses his desires to put more restrictions onto our Police officers whom face their own deaths daily. http://www.breitbart.com/big-government/2014/08/14/rand-paul-police-militarization-makes-americans-esp-blacks-feel-gov-t-is-targeting-them/

While Sen. Rand Paul is attempting to attract more minorities into his political camp while he campaigns in an effort to become a GOP candidate for President of the United States, he is criticizing our police officers and their police departments.

On this issue, it is time for Sen. Rand Paul to fold his campaign tent and become more interested in protecting our US Military, our federal, state, and local law enforcement organization before he assists Al Sharpton’s left-wing criminals who continue to protest, riot, vandalize, loot, and burn others properties.

To stop the criminal activity, everyone involved, including our political leaders, must be held accountable.

SOMERSET, Ky. — Somerset’s City Hall ventured into the retail gas business Saturday, opening a municipal-run filling station that supporters call a benefit for motorists and critics denounce as a taxpayer-supported swipe at the free market.

POLL: If the Republicans take the Senate in November, will that solve the problems in Washington DC?

The Somerset Fuel Center opened to the public selling regular unleaded gas for $3.36 a gallon, a bit lower than some nearby competitors. In the first three hours, about 75 customers fueled up at the no-frills stations, where there are no snacks, no repairs, and only regular unleaded gas.

The mayor says the station was created in response to years of grumbling by residents about stubbornly high gas prices in Somerset, a city of about 11,000 near Lake Cumberland, a popular fishing and boating haven.

The venture got a thumbs-up from customers who let their vehicles reach near-empty in anticipation of the city-run station’s opening. I awoke and became annoyed when I discovered Mary forgot to pay the water bill. That was the extent of my problems September 11, 2001. Meanwhile, many of my fellow Americans in the twin towers were faced with the unimaginable horror of deciding whether to leap to their deaths or be consumed by fire. Dear Lord.

Ten years after 9/11 Mayor Bloomberg banned prayer from the New York 9/11 Memorial Ceremony. And yet, Bloomberg supports the building of a mosque at Ground Zero.

The left supports Sharia Law while President Obama canceled the traditional National Day of Prayer at the White House for fear of offending Muslims.

Remarkably, thanks to the grace of God and the efforts of George W. Bush, America has not suffered another terrorist attack. And yet, the Obama administration is still seeking to prosecute CIA heroes who helped to protect us.

Terrorists caught on the battle field detained at Guantanamo Bay are treated with kid gloves; special concessions made out of respect for their religion, Islam, which includes meal choices from five menus, served at a specific temperature or thrown out and prepared again.

Muslim detainees are given prayer beads, a prayer mat and a Quran which can not be touched by non-Muslims because we are considered infidels. Thus, a Muslim interpretor gives the detainees their sacred items. At Guantanamo, arrows painted on the floor pointing east informs detainees in which direction to pray.

Clearly, ten years after the horrific 9/11 attacks, America has two enemies seeking her destruction; Al-Qaeda and the American left who reside mostly in the Democratic Party lead by Barack Husein Obama. To save America, BOTH must be defeated.

The Bible documents on numerous occasions how God raised up a remnant. The modern equivalent of God raising up a remnant is the Tea Party movement; no leader, no figure head and no single governing organization. The Tea Party is simple We The People; individuals following their gifts and passions to turn our country around back to the principles and values which have made her GREAT!

The left is in panic mode to counter the Tea Party. Because their philosophy is so flawed, they can not win on it's merit. Thus, the left must resort to lies and ginning up class envy and racial hatred. Totally despicable.

I will spend 9/11 on Tea Party Express V national bus tour at our rally in Deltona, FL.

With forces on both sides of the political aisle fighting to maintain the status quo; crony-ism, bigger government and even increasing out of control spending, the tea party is the last hope for America; God's remnant to save America and restore her to her former glory.