Neither shall he profane his seed among his people: for I the LORD do sanctify him.And the LORD spake unto Moses, saying,No man that hath a blemish of the seed of Aaron the priest shall come nigh to offer the offerings of the LORD made by fire: he hath a blemish; he shall not come nigh to offer the bread of his God. He shall eat the bread of his God, both of the most holy, and of the holy.

The period from Passover to Shavu’ot is a time of great anticipation. We count each of the days from the second day of Passover to the day before Shavu’ot, 49 days or 7 full weeks, hence the name of the festival. See The Counting of the Omer. The counting reminds us of the important connection between Passover and Shavu’ot: Passover freed us physically from bondage, but the giving of the Torah on Shavu’ot redeemed us spiritually from our bondage to idolatry and immorality. Shavu’ot is also known as Pentecost, because it falls on the 50th day; however, Shavu’ot has no particular similarity to the Christian holiday of Pentecost, which occurs 50 days after their Spring holiday.

Shavu’ot is not tied to a particular calendar date, but to a counting from Passover. Because the length of the months used to be variable, determined by observation ( see Jewish Calendar ), and there are two new moons between Passover and Shavu’ot, Shavu’ot could occur on the 5th or 6th of Sivan. However, now that we have a mathematically determined calendar, and the months between Passover and Shavu’ot do not change length on the mathematical calendar, Shavu’ot is always on the 6th of Sivan (the 6th and 7th outside of Israel. See Extra Day of Holidays.)

Work is not permitted during Shavu’ot.

It is customary to stay up the entire first night of Shavu’ot and study Torah, then pray as early as possible in the morning.

It is customary to eat a dairy meal at least once during Shavu’ot. There are varying opinions as to why this is done. Some say it is a reminder of the promise regarding the land of Israel, a land flowing with “milk and honey.” According to another view, it is because our ancestors had just received the Torah (and the dietary laws therein), and did not have both meat and dairy dishes available. See Separation of Meat and Dairy.

The book of Ruth is read at this time. Again, there are varying reasons given for this custom, and none seems to be definitive.

1) And when the day of Pentecost was fully come, they were all with one accord in one place.

2) And suddenly there came a sound from heaven as of a rushing mighty wind, and it filled all the house where they were sitting.

3) And there appeared unto them cloven tongues like as of fire, and it sat upon each of them.

4) And they were all filled with the Holy Ghost, and began to speak with other tongues, as the Spirit gave them utterance.

5) And there were dwelling at Jerusalem Jews, devout men, out of every nation under Heaven. 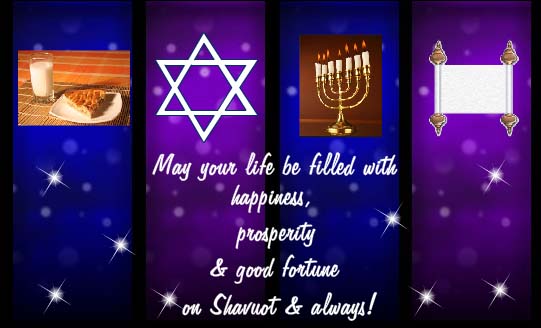 Pray for the peace of Jerusalem: they shall prosper that love thee.