.
scumbag-Comey And McCabe Should Be
Charged With A Conspiracy To
Defraud Americans 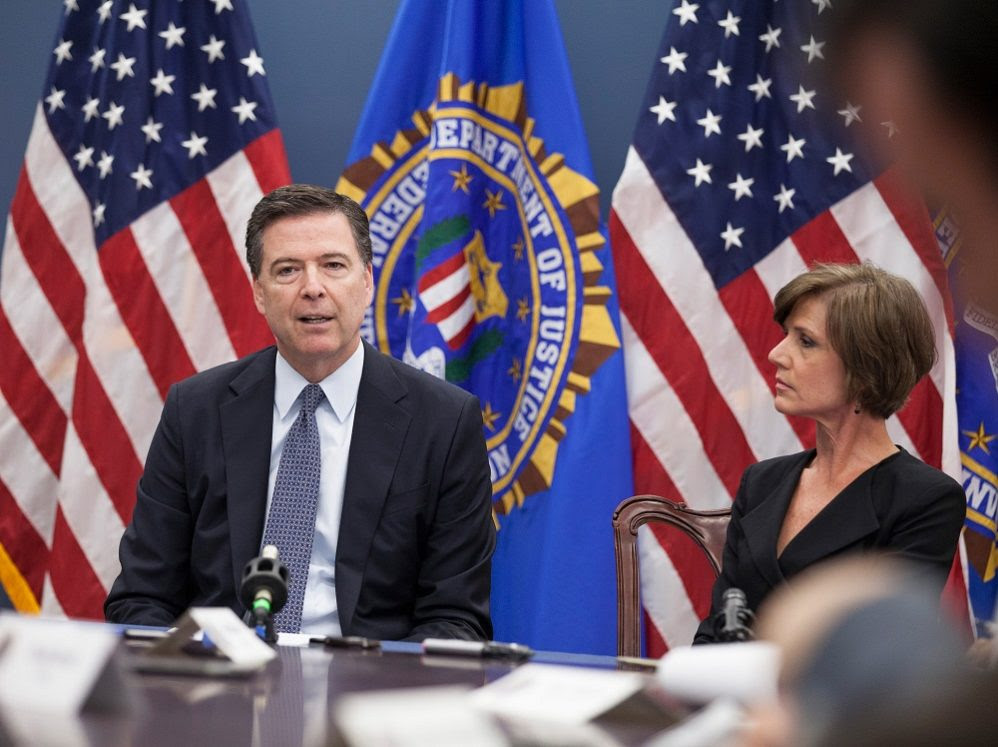 by H.A. Goodman
{ thefederalist.com } ~ Not long ago, CNN and MSNBC, along with everyone from The New York Times and Washington Post to Bloomberg and Brookings, cited 18 U.S. Code 371 as a legal statute President Trump had possibly violated... This  conspiracy statute is broad and deals with two or more individuals who conspire “to defraud the United States, or any agency thereof in any manner or for any purpose.” After two years of a dirty cop-Mueller probe started by leaked memos from scumbag-James Comey, and investigations fostered by a debunked dossier purchased by scumbag/liar-Hillary Clinton and Democrats, 18 U.S. Code 371 can ironically be used against those who investigated President Trump, without evidence he or anyone around him committed crimes associated with the Democratic National Committee (DNC) hack. As for the alleged hacking, The Daily Beast’s Kevin Paulson wrote “Both the DNC and the security firm Crowdstrike, hired to respond to the breach, have said repeatedly over the years that they gave the FBI a copy of all the DNC images back in 2016.” Since the U.S. government never analyzed DNC servers in order to confirm the accuracy of Crowdstrike’s copies, and the DNC hired  Crowdstrike, there’s an obvious conflict of interest in trusting a firm outsourced by Democrats. Like the Steele dossier, Americans were forced to take the “word” of people linked to Democratic Party funding that Russia had something on Trump, and that only endless investigations would put the allegations to rest. With the dirty cop-Mueller probe done and no further indictments on the horizon, along with the fact no evidence was found of Trump colluding with Russia hence, no further indictments, President scumbag/liar-nObama’s FBI officials now face a litany of criminal referrals from Rep. Devin Nunes and other Republicans. In addition to leaking classified memos and lying to Congress, conspiracy charges will be one aspect...   https://thefederalist.com/2019/04/12/comey-mccabe-charged-conspiracy-defraud-americans/?utm_source=The+Federalist+List&utm_campaign=92535cfe73-RSS_The_Federalist_Daily_Updates_w_Transom&utm_medium=email&utm_term=0_cfcb868ceb-92535cfe73-83771801
.
Sicko, Southern Border-Style

by Brian C. Joondeph
{ americanthinker.com } ~ Sicko is one of Michael Moore’s many movies, focusing on the U.S. health care system, costs, the uninsured, and the usual liberal talking points... Despite his many criticisms of U.S. health care, when Moore was sick with pneumonia, he chose hospitalization in a New York City hospital rather than in one of those countries with a supposedly far better health care system, say, Cuba. He could make a sequel to Sicko, this time focusing on the southern border of the U.S. and the hordes of sick men, women, and children invading America, bringing all sorts of exotic diseases on top of the many other problems they bring, including crime. These diseases are making many Americans sicko. It’s more than simply lice or scabies, annoying conditions, but hardly a mortal threat to Americans. Instead it’s contagious diseases that we haven’t heard much about in decades or since many of us were afflicted as children. These diseases are making the news, but as predictable as sunrise and sunset, the media and government officials are at a loss to explain the resurgence of these mostly once-eradicated conditions. Much as when a swarthy young man enters a gay nightclub in the U.S. shouting 'Allahu Akbar!' and shoots the place up, the media and law enforcement are puzzled for days as to motive. Same with the appearance of these resurgent contagious diseases. Temple University in Philadelphia had a mumps outbreak, now at 140 cases. The Philadelphia Inquirer reported the story nonchalantly, avoiding their namesake with zero inquiry as to the cause and origin of this outbreak. Nearby  University of Pennsylvania had three cases of mumps on campus with no explanation as to why...
https://www.americanthinker.com/articles/2019/04/sicko_southern_borderstyle.html
.
Leftism: A Warped Reflection of Christianity

by Rick Hayes
{ americanthinker.com } ~ As the long conga line of Democrats prepare for their chance at the Presidency, not since the American Civil War has the country been so divided on critical issues as it is right now... Moreover, although Democrat Socialists, aka leftists, say the country is in a mess, they don't seem too concerned with the traditional topics of taxes, military spending, and balanced budgets. They are, however, very focused on trying to demonstrate what a bad person they think Trump is and how righteously superior they think they are.  Listening to Democratic candidates lecture Americans on morality regarding a border wall or the sanctity of sanctuary cities their campaign rhetoric sounds more like a religious movement than a political position. It is rather apparent that the left is entirely void of any economic plans or international policies. Instead, it has resorted to becoming pseudo-preachers of a quasi-socialist religion, sounding more sanctimonious by the day. So the only questions Americans can ask themselves at this point is whether or not they want to remain a nation based on the belief in God and laws or a country based on faith in government and social justice? One of the biggest scams and tactical deceptions that leftists use to gain support from outsiders is the attempt to equate Christian teachings to their socialist policies. As if Christianity is more closely matched with the left's good socialist intentions rather than the God-centered Constitution. Nothing could be farther from the truth. In fact, according to a February 2016 article on the Action Institute power blog, since the mid-1800s every Catholic pontiff from Pius IX to Benedict XVI has forthrightly condemned socialism. The American conservative sees God as the architect of everything and originator of man's freedom, and the view of government is limited to protecting those God-given gifts. Whereas the leftist sees government as a godlike idol and their role as the arbiters that control the allowances parted out to the masses -- two opposite ways of life with socialism utterly incompatible with Christianity on every level...
https://www.americanthinker.com/articles/2019/04/leftism_a_warped_reflection_of_christianity.html
.
Stefanik Moves To Prevent
scumbag-Comey-Era Spy Abuses At FBI 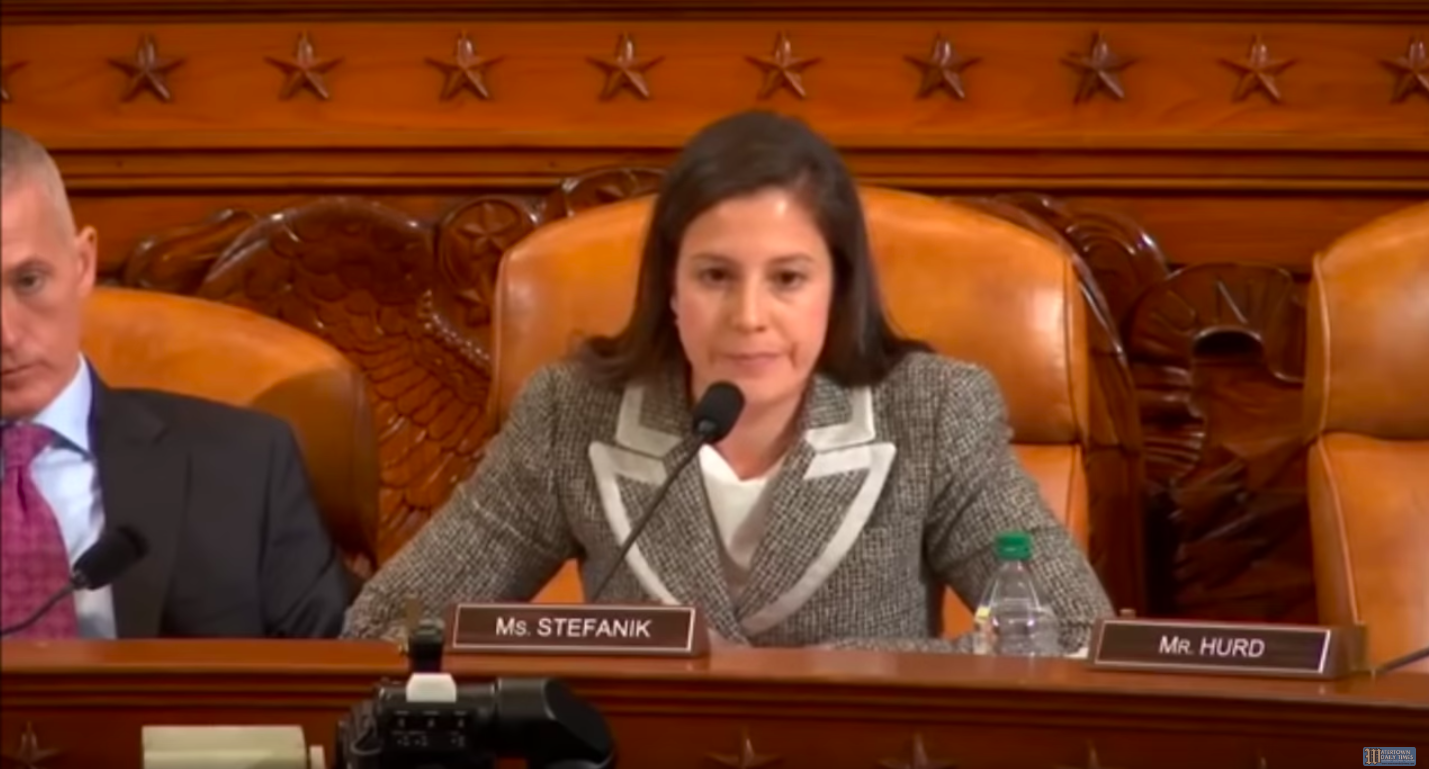 by Mollie Hemingway
{thefederalist.com} ~ Elise Stefanik, a Republican lawmaker who sits on the House Permanent Select Committee on Intelligence, introduced legislation Wednesday... that would require the FBI director to promptly inform Congress when investigations of candidates for federal office are undertaken by federal law enforcement or intelligence authorities. Two years ago, when then-FBI Director scumbag-James Comey finally notified Congress that he’d opened up a counterintelligence investigation of the Trump campaign the previous year, some members were deeply troubled. Not only was the FBI director not supposed to hide his counterintelligence work from a key group of congressional members who receive his briefings, he was supposed to notify them in particular about politically sensitive probes. The legislation from Stefanik, a three-term representative from New York, addresses a loophole in current law that allowed scumbag-Comey to unilaterally withhold that information from key congressional oversight bodies. In a March 2016 hearing, scumbag-Comey admitted to Stefanik that he did not follow the typical protocols or procedures regarding notifying Congress about the opening of a counterintelligence investigation in part because he was not required to do so. Pressed to explain why he waited nine months to brief the leaders of the House and Senate intelligence committees, he admitted he was supposed to provide quarterly updates but had refused to do so regarding the Trump-Russia probe for the same reason many thought he should have done so. “I think our decision was, it was a matter of such sensitivity that we wouldn’t include it in the quarterly briefings,” he said...
https://thefederalist.com/2019/04/11/stefanik-moves-to-prevent-comey-era-spy-abuses-at-fbi/?utm_source=The+Federalist+List&utm_campaign=92535cfe73-RSS_The_Federalist_Daily_Updates_w_Transom&utm_medium=email&utm_term=0_cfcb868ceb-92535cfe73-83771801
VIDEO:  https://www.youtube.com/watch?v=HlXXZQgh72Y
.
AG William Barr Turns Focus on
FBI’s Conduct During Russia Probe
by Shawn
{ fixthisnation.com } ~ Patriots all over the country have new reason to hope that justice will finally be served to those who participated in the hoax to bring down an American President... On Tuesday, a Trump administration official told Fox News that Attorney General William Barr was serious about getting to the bottom of the Russian collusion probe that saw the FBI send spies into the Trump campaign. Reportedly, Barr is assembling a “team” to look into the origins of the FBI’s counterintelligence investigation to determine if there was probable cause for the Bureau to launch what became a three-year ordeal. An ordeal that, at the end of the day, caught NOT A SINGLE Trump campaign associate in anything resembling collusion with a foreign government. The FBI has claimed, vaguely, that “Operation Crossfire Hurricane” was opened in the summer of 2016 after they received a tip that campaign associate George Papadopoulos was drunkenly running his mouth in a British pub. According to this tale, Papadopoulos told an Australian diplomat that Russia had possession of scumbag/liar-Hillary Clinton’s missing emails, which would soon be publicly exposed for the benefit of Donald Trump. It goes underreported for obvious reasons that even if the Papadopoulos tale is true, what he actually said in that bar was nonsense. Russia may have hacked the DNC and gained access to those emails, but there was never any indication that they had access to scumbag/liar-Clinton’s private server – the one that caused her so much trouble throughout the campaign. These are two entirely separate issues. The media took full advantage of the “email” similarities, though, to make it sound as if Papadopoulos had inside knowledge about the DNC hack...
http://www.fixthisnation.com/conservative-breaking-news/ag-william-barr-turns-focus-on-fbis-conduct-during-russia-probe/
.

.
Socialist commie-Sanders: Capitalism Made Me a Millionaire!

Thomas Gallatin:  “I wrote a best-selling book,” Sen. commie-Bernie Sanders boasted in a recent interview with The New York Times. Then in an ironic twist, the die-hard socialist gave a plug for capitalism when he added, “If you write a best-selling book, you can be a millionaire, too.” Either Sanders is going senile or, as is the case with most hypocritical leftists, he sees no problem embracing the wealth and status he garnered for himself via capitalism, while at the same time condemning others for applying the same free-market system to earn their own wealth.

Back in the 1980s, commie-Sanders infamously said that breadlines were “a good thing.” Asked about his support for the Marxist Sandinistas of Nicaragua, commie-Sanders opined, “It’s funny — sometimes American journalists talk about how bad a country is, that people are lining up for food. That is a good thing! In other countries, people don’t line up for food. The rich get the food and the poor starve to death.” His policies would yield the equivalent of breadlines.

Meanwhile, commie-Sanders declared that he will be  releasing 10 years of his tax returns, giving away the game by declaring, “I hope that Donald Trump will do exactly the same.” Presumably, this is so socialist Sanders can attack capitalism for allowing a guy like Trump to become a wealthy man. It’s the pot — commie-Sanders, with his millions of dollars and three homes — smugly calling the kettle black.  ~The Patriot Post