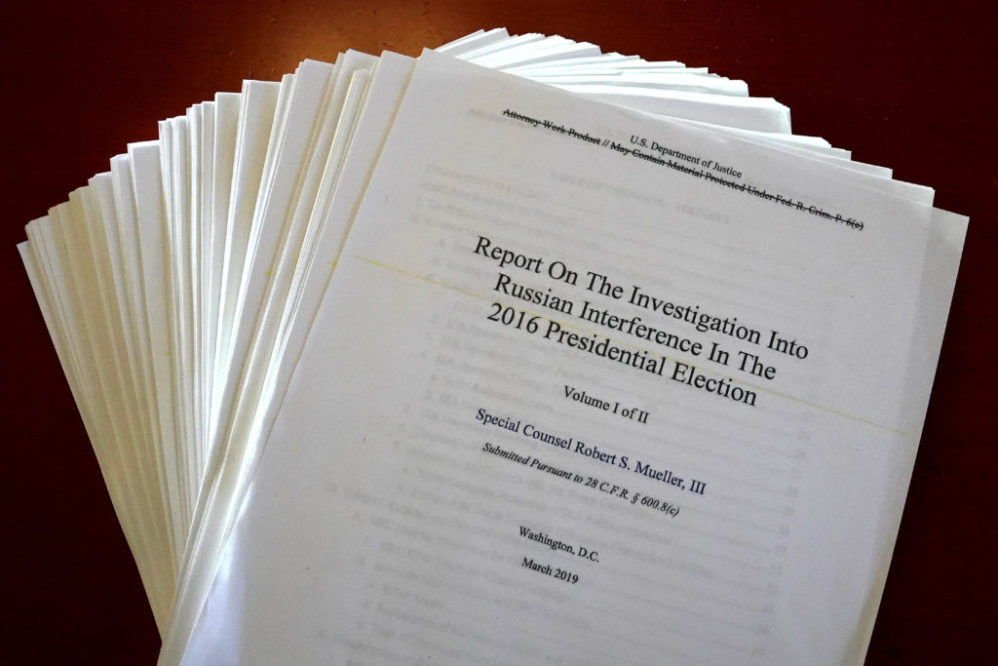 by Madeline Osburn
{ thefederalist.com } ~ After two and a half years of countless mainstream media “scoops” and “bombshells” that turned out to be false or nonexistent, the American people finally have some concrete answers on Russiagate... When Special Counsel dirty cop-Robert Mueller released his 448-page report on Russian interference in the 2016 election on Thursday, some of the investigation’s conclusions debunked once and for all many misleading, and anonymously sourced, conspiracy theories. Here are some of the most prominent stories the press got wrong about the Russian collusion narrative. 1. Michael Cohen Never Went To Prague The infamous Christopher Steele dossier, which was funded by the scumbag liar-Hillary Clinton campaign and the Democratic Party, alleged that Trump lawyer Michael Cohen met with Federation Council foreign affairs head Konstantin Kosachev in Prague. Desperately wanting to confirm this, news outlets sent reporters to hotels all over Prague checking hotel logs. In April 2018, McClatchy reported dirty cop-Mueller had obtained evidence of Cohen’s visit to the Czech Republic, according to two anonymous sources. In December 2018, they reported that Cohen’s cell phone, or a device registered to him, was pinged off towers near Prague. The dirty cop-Mueller report debunked this piece of the dossier once and for all when the special counsel wrote, “Cohen had never traveled to Prague and was not concerned about those allegations, which he believed were provably false.” McClatchy has now added a two sentence editor’s note to their two reports on Cohen. 2. Carter Page Was Not a Russian Agent 3. Donald Trump Did Not Direct Cohen to Lie to Congress 4. Cohen’s Call With a Russian Did Not Prove Collusion 5. Paul Manafort Was Not Funneling Polling Data to Putin 6. The Trump Campaign Did Not Make Republicans Soften Their Position on Ukraine 7. Jeff Sessions Was Not a Russian Spy...
https://thefederalist.com/2019/04/19/7-ways-mueller-report-exposed-medias-bombshell-fake-news-stories/?utm_source=The+Federalist+List&utm_campaign=b28a57022c-RSS_The_Federalist_Daily_Updates_w_Transom&utm_medium=email&utm_term=0_cfcb868ceb-b28a57022c-83771801
VIDEO 1:  https://www.youtube.com/watch?v=EOikwtpWcjY
VIDEO 2:  https://www.youtube.com/watch?v=_g1A54eZDUY
.
dirty cop-Mueller’s Report Ends ‘Witch Hunt’
But What’s About To Unfold Is The Real Story

by Sara Carter
{ saraacarter.com } ~ Attorney General William Barr stressed Thursday during his press conference that although Special counsel dirty cop-Robert Mueller detailed 10 “episodes”... involving actions by President Trump that might have constituted obstruction of justice, neither the DOJ, nor Deputy Attorney General Rod Rosenstein believed those actions violated the law. Barr said based on the evidence that Trump’s action had “non-corrupt motives.” The redacted version of dirty cop-Mueller’s report   was released late Thursday. The very few redactions in the behemoth report show the reasons for the decisions, which were based on recommendations made by the intelligence community, DOJ and dirty cop-Mueller prosecutors to protect classified information, sources and methods and information pertaining to ongoing litigation.The roughly 400 page report is what it is and now it is available for the public. After more than two years and national media consumption of every rumor possible the investigation has concluded that neither President Trump, anyone on his campaign and no American colluded with Russia to influence the 2016 election. Thank goodness. We should be celebrating. Instead, many media outlets who carried the Trump conspiracy water to thirsty ‘anti-Trumpers’ and angry Democrats are scouring the pages looking for anything to salvage their failed attempts at removing a duly elected president. The reality, however, is that it’s over for those pushing the now debunked Trump Russia collusion. It is a chapter closed. What is left, however, are multiple chapters still left to be written. What will unfold is investigation into what historians will consider one of the greatest political ‘witch-hunts’ in U.S. history. If justice is served, those responsible will be outed and prosecuted...   https://saraacarter.com/muellers-report-ends-witchhunt-but-whats-about-to-unfold-is-the-real-story/?utm_source=Darkwire+Inc&utm_campaign=49dd2e31ad-End+of+Mueller+Report+What%27s+Next&utm_medium=email&utm_term=0_5f3d745e4f-49dd2e31ad-283256057
.
scumbag-Steny Hoyer Said Impeachment
‘Is Not Worthwhile,’ Left-Wingers Freaked 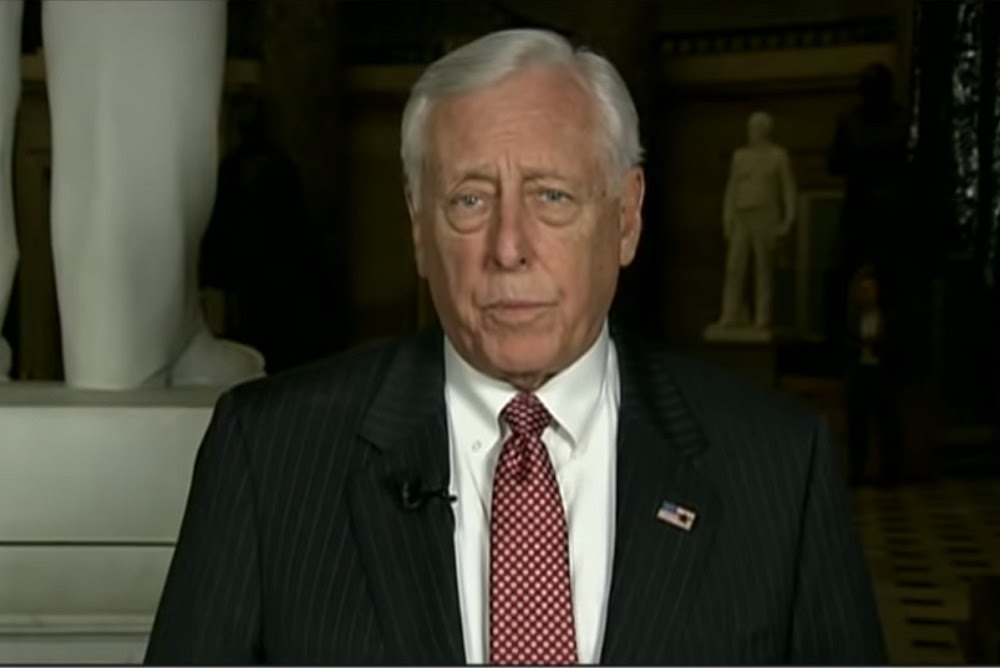 by Emily Jashinsky
{thefederalist.com} ~ House Majority Leader scumbag-Steny Hoyer (D-Md.) reacted to the release of the dirty cop-Robert Mueller report on Thursday by arguing impeachment of President Trump “is not worthwhile.”... His two-sentence comment to CNN ignited a furor on the left, rankling those who predictably interpreted the report as further cause for impeachment efforts. “Based on what we have seen to date, going forward on impeachment is not worthwhile at this point,” scumbag-Hoyer  told Dana Bash. “Very frankly, there is an election in 18 months and the American people will make a judgment.” scumbag-Hoyer’s apparent signal that Democratic leadership, like most of the rest of the country, is prepared to move on from the special counsel investigation didn’t sit well with a host of anti-Trump commentators. For a sampling of the backlash, see the tweets below. And expect the tension between Democratic leadership and the party’s progressive wing to escalate...
https://thefederalist.com/2019/04/18/steny-hoyer-said-impeachment-is-not-worthwhile-left-wingers-freaked/?
.
2020 Dem Goes Off-Script, Admits He’s
‘Concerned’ About Rise of Socialism
in Democratic Party

by Malachi Bailey
{ westernjournal.com } ~ The Democratic Party is fracturing as left-wing lawmakers begin to embrace socialism, but Democratic Rep. Tim Ryan said... that he’s “concerned” about the growing popularity of socialism in his party. The Ohio representative and 2020 hopeful was asked about the growing trend of socialism in the Democratic Party on CNN’s “New Day.” “I’m concerned about it because if we are going to decarbonize the economy, it’s not going to be some centralized bureaucracy in Washington, D.C., that’s going to make it happen,” Ryan said Wednesday. Ryan explained that the free market, along with “part targeted government investments,” will lead the way toward cleaner energy. “It’s going to be part targeted government investments that do need to be robust,” Ryan said. “But it’s going to be the free market that at the end of the day is going to make that happen. “They have the magic of the free market. They have the innovation, the creativity, the profit motive.”Ryan’s stance is in stark contrast to several far-left lawmakers who support the “Green New Deal,” an extremely expensive, centralized government program to reduce the use of fossil fuels. It’s important to note that a self-described socialist, freshman Rep.  commie-Alexandria Ocasio-Cortez, crafted the Green New Deal. But that obviously wouldn’t be a problem for 2020 hopeful Sen. commie-Bernie Sanders, who is also a self-described socialist...
https://www.westernjournal.com/ct/2020-dem-goes-off-script-admits-concerned-rise-socialism-democratic-party/?utm_source=Email&utm_medium=conservativevideos&utm_campaign=dailyam&utm_content=libertyalliance
VIDEO:  https://twitter.com/NewDay/status/1118480133893963776?ref_src=twsrc%5Etfw%7Ctwcamp%5Etweetembed%7Ctwterm%5E1118480133893963776&ref_url=https%3A%2F%2Fwww.westernjournal.com%2Fct%2F2020-dem-goes-off-script-admits-concerned-rise-socialism-democratic-party%2F
.
The Ideological Roots of Modern Socialists
by Allen Gindler
{ americanthinker.com } ~  More often than not, socialism is associated with Marxism. But this is a misconception, as Marxism is an ideology of communism, an extreme and exceptional current of socialism... Marxism left a significant ideological imprint in socialist doctrines; nevertheless, it did not constitute a mass movement of the Left. The reality is trivial: Marxism belongs to the Left, but the mainstream of the Left's ideologies is not Marxian. Ironically, the main currents of socialism emerged as a reformation, a revision of Marxian thoughts. Those revisionists can be divided into two groups: conformists and non-conformists. To the latter group belong, for example, revolutionary syndicalists and Bolsheviks who emancipated themselves from the determinism of Marxian materialist conception of history and saw a violent revolution as the only means to overthrown capitalism. The former group — Social Democrats — constitutes the majority of the socialist movement in Europe then and now. Social Democrats representing the flavor of the evolutionary socialism have been incorporated in the framework of the democratic state and sought to undermine capitalism from within. In the beginning, they symbolized labor and fought for improving laborers' welfare on the sites of parliament by securing wealth redistribution in the laws of the land. At some point, an erroneous division of society into two classes — the proletariat and bourgeoisie — had vividly manifested itself as an emerging middle class, becoming a dominant stratum in the contemporary industrial countries. It became inconvenient to represent a proletariat, as it made sense only in the framework of the Marxian theory of class struggle. Therefore, modern social Democrats are on a constant search for a suitable electorate they would fight for. At present, they have managed to be representatives of amorphous strata of the "unfortunate," "unprivileged," "chronically oppressed," and "minorities" organized as an underclass. They stopped representing genuine and original labor in the way it was understood at the turn of the 19th and 20th centuries... https://www.americanthinker.com/articles/2019/04/ideological_roots_of_modern_socialists.html
.
.

Harold Hutchison:  Last month, the United States conducted a “freedom of navigation” exercise in the Taiwan Strait, a body of water between the island of Taiwan (the bulk of the territory of the Republic of China) and the “People’s Republic” of China. One of the ships taking part in this wasn’t a warship, though. It was the national security cutter USCGC Bertholf.

Now, we have been talking about the U.S. Navy’s lack of hulls in the water for quite a while. It has been very visible in both the mismanaged carrier force and the shrinking submarine force. But this has to be another sign of just how desperately short we are when it comes to the force structure.

We have also mentioned in the past just how badly the Coast Guard is stretched. The good news is that the Bertholf-class cutters will at the very least replace the older Hamilton-class cutters on a one-for-one basis. But sending them into the middle of a contested strait is simply stupid — especially given the experience of USS Mason (DDG 87) off the coast of Yemen in 2016. That vessel was fired on multiple times by Iranian-backed Houthi forces.

USS Mason had advanced radars, electronic warfare systems, surface-to-air missiles, as well as point-defense systems to protect itself. The vessel did so successfully, and we retaliated … with a grand total of three Tomahawks. But our efforts to keep Iran from gaining control of Yemen don’t need rehashing today. The problem is that the Bertholf does not have many of those systems, and could easily have been hit by the Iranian-built anti-ship missiles.

What it does have, according to the 16th Edition of the Naval Institute Guide to Combat Fleets of the World, is one 57mm gun, a Mk 15 Phalanx Close-In Weapon System, and a bunch of .50-caliber machine guns. They also have some decoy launchers and electronic-warfare systems. Now, in the past, Coast Guard cutters had the ability to add Harpoon anti-ship missiles, but those aren’t normally carried.

The thing is, the Navy has bought a number of littoral combat ships with an armament not much heavier than that of the Bertholf-class cutters. In 2010, USS Freedom carried out a deployment with Southern Command and made four drug busts and two port visits in 47 days. The Navy should hand their current littoral combat ships over to the Coast Guard and buy the up-armed versions that are part of the FFG(X) competition as replacements on a one-for-one basis. A modified version of the Bertholf is also one of the competitors for the Navy’s new frigate program, and packs a lot more punch — and it should be one of the designs the Navy buys to fix its shortage of hulls in the water, given how the Bertholf was sent to work with an Arleigh Burke-class guided-missile destroyer. Granted, the Alvaro de Bazan design that is also competing for the FFG(X) contract would be a better option to pair with a Burke, but the fact is, you don’t send a Coast Guard cutter to face the Chinese military without a major upgrade.

But the fact of the matter is that the Coast Guard should be staying closer to the American coast. Granted, they need new icebreakers, given the sad state of their current icebreaker fleet, but the ones they have may need to be kept closer to home. Face it, when you only have one operational heavy icebreaker, it shouldn’t be 11,000 miles away. The Coast Guard is planning new icebreakers, but they are a long way off. Given the global commitments of the United States, the Navy should also get into the icebreaker game — ideally with icebreakers that have the firepower to take on Russia in the Arctic.

The Coast Guard has to cover and secure a coastline that is six times as long as the border with Mexico, and with maybe two-thirds of the personnel of Customs and Border Protection. Given that reality, we shouldn’t be sending Coast Guard cutters to do Navy missions.