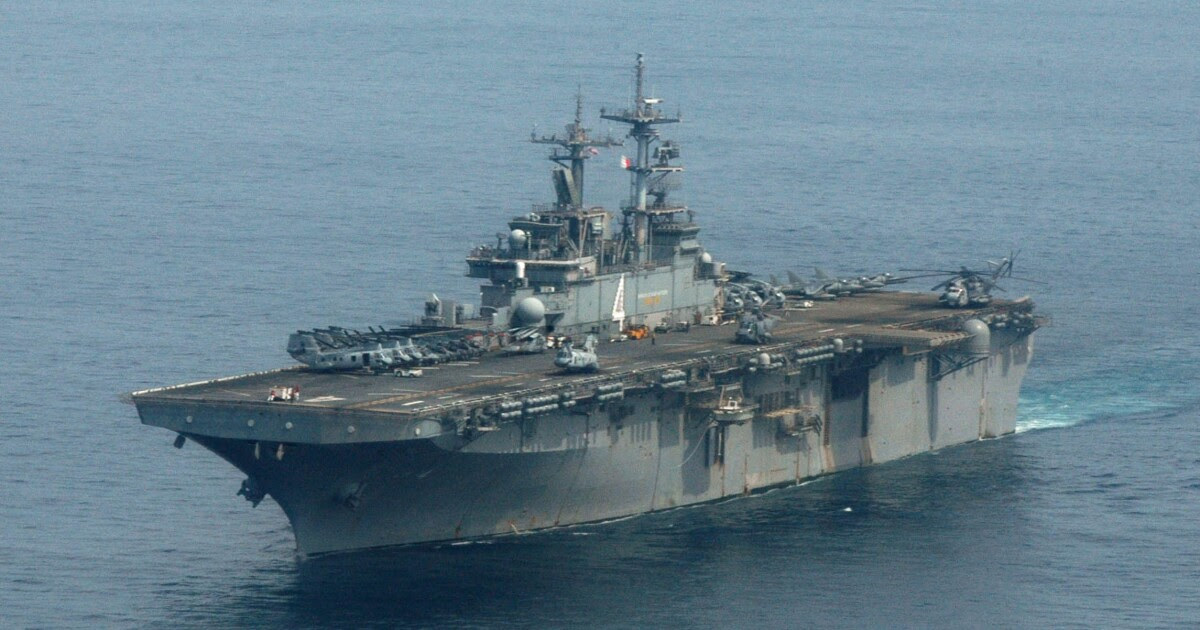 by Tim Pearce
{ washingtonexaminer.com } ~ The U.S. military shot down an Iranian drone threatening U.S. ships in the Strait of Hormuz... The United States took action on Thursday amid escalating tensions with the Middle East country. President Trump announced the event at a press conference soon after it happened. Iran has not yet responded. "The USS Boxer took defensive action against an Iranian drone," Trump said. "It was threatening the ship and the ship's crew. The drone was immediately destroyed." "This is the latest in many provocative and hostile actions by Iran against vessels operating in international waters," Trump added. "The United States reserves the right to defend our personnel, our facilities, and interests and calls upon all nations to Iran's attempts to disrupt freedom of navigation and global commerce." "At approximately 10 a.m. local time, the amphibious ship USS Boxer was in international waters conducting a planned inbound transit of the Strait of Hormuz. A fixed wing unmanned aerial system (UAS) approached Boxer and closed within a threatening range. The ship took defensive action against the UAS to ensure the safety of the ship and its crew," chief Pentagon spokesperson Jonathan Hoffman said in a statement. Tensions between the U.S. and Iran have steadily risen since Trump pulled the U.S. out of the Iran nuclear agreement in May 2018, throwing sanctions back on Tehran and squeezing the country's economy. On Thursday, Iran  announced it had seized United Arab Emirates-based ship and was holding it and its crew captive. The U.S. has demanded Iran release the ship. The ship's capture is the latest in a series of provocations by Tehran. It downed a U.S. drone over the strait on June 20, days after attacking Japanese oil tankers that were sailing through the strait...  https://www.washingtonexaminer.com/news/us-downs-iranian-drone-for-threatening-navy-ship?utm_source=WEX_Breaking%20News%20Alert_07/18/2019&utm_medium=email&utm_campaign=WEX_Breaking%20News&rid=5261
VIDEO:  https://www.youtube.com/watch?v=gMhIOVTL7Qc
.
Leader McCarthy: House Democrats
Dead Set on Erasing Economic Gains 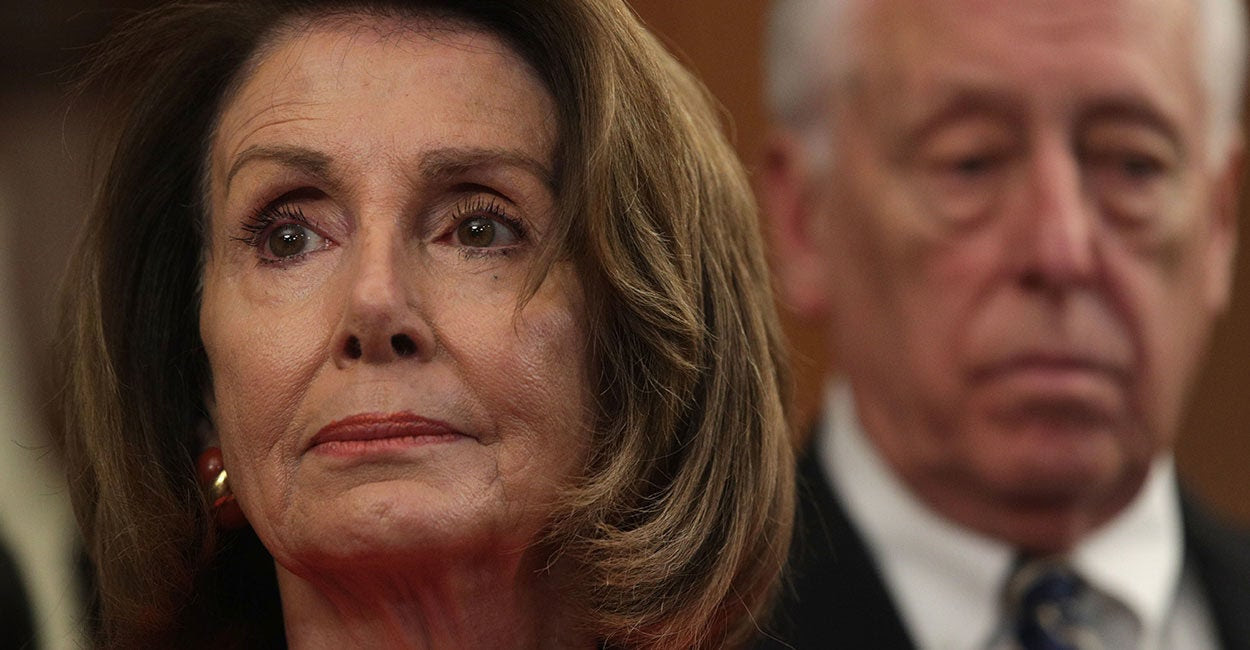 Rep. Kevin McCarthy
{ dailysignal.com } ~ Over the last 18 months, the American economy has grown at a record-breaking rate, and the results have had a far-reaching positive impact on communities nationwide... Since January 2017, 5.6 million jobs have been created with the help of Republican-led tax reform, deregulation, and other pro-growth reforms. The unemployment rate is near a 50-year low with 224,000 jobs added to the economy last month, surpassing economists’ expectations. At the same time, wages have risen over 3% for an astounding 11 consecutive months. Even The New York Times has admitted that wage growth is in a “higher gear” and is “going to those who need it most.” Our nation is in the midst of enjoying the best economy we have seen in a generation. These results did not occur by accident. They transpired because policymakers made an intentional choice to allow free enterprise to flourish and remove unnecessary burdens on families and businesses. But our economic progress can, and will, be overturned if Congress tries to control the economy from within its bubble in Washington, D.C., as Democrats are attempting to do today. Their latest Washington-centric proposal is the Raise the Wage Act, legislation that would artificially raise the federal minimum wage to $15 an hour—over twice its current amount. This bill is another misguided attempt by Democrats to impose one-size-fits-all policy on the American people. It is backward-looking and proves that Democrats are dead set on erasing the progress our economy has made since President Donald Trump took office. The nonpartisan Congressional Budget Office recently released a study that indicates a $15 minimum wage could result in jobs lost and hurt the very people Democrats claim to want to help... The House did pass the $15 wage.
https://www.dailysignal.com/2019/07/17/leader-mccarthy-house-democrats-are-dead-set-on-erasing-economic-gains/?utm_source=rss&utm_medium=rss&utm_campaign=leader-mccarthy-house-democrats-are-dead-set-on-erasing-economic-gains&mkt_tok=eyJpIjoiT1dSaE1EYzFORFV3WXpBMiIsInQiOiJyNjB0SmtuN1JzQTJPOVk3OVd2Q3RpTmZoamhWXC9OK0dIQ0dWVXB4c2lOZGpJbFVMcVdueENVQWtTYmo3NldcL2RuT3preVVPZGFUSjBSXC9tTE8zRUdUeVdSM1ZQYm1ybWU5V0RkeDlaYVpSdWtsNURcLzNlWTBhOWxZcGx3ODJKVlQifQ%3D%3D
.
Wall Street Liberals: dinky-Warren ‘Better
Form of Poison’ Than commie-Sanders

By David Rutz
{ freebeacon.com } ~ Sen. Elizabeth dinky-Warren (D., Mass.) was called a "better form of poison" than Sen. commie-Bernie Sanders (I., Vt.) by an ex-Wall Street executive resigned to her winning the 2020 Democratic presidential nomination... The executive anonymously told Politico to expect dinky-Warren to get the nomination and Wall Street to adapt to a potential dinky-Warren presidency. "Wall Street is very good at accommodating itself to reality and if the reality is the party is going to be super-progressive, they may not like dinky-Warren but she's a better form of poison than commie-Bernie," the executive said. Robert Wolf, a venture investor and former adviser to President Barack scumbag/liar-nObama, told Politico she's "preferable for many reasons" to commie-Sanders, if it comes down to one of the two in the crowded 2020 field. "She's been very clear that she believes in fair capitalism. And the idea of promoting socialism I don't think is a winning strategy if the goal is to beat President Trump," he said.Warren released a plan Thursday to "end Wall Street's stranglehold on our economy," which included sharper regulation of private equity firms, re-enacting the Glass-Steagal Act to wall off commercial and investment banks, and undoing Trump-era policies relaxing restrictions on the financial industry.  "Financial firms have helped push our economy badly off track," she wrote. "I want wages to go up, small businesses to thrive, and the economy to grow faster. To do that, I will stop the looting and make sure Wall Street serves the rest of the economy, rather than the other way around."...  https://freebeacon.com/politics/wall-street-liberals-warren-better-form-of-poison-than-sanders/?utm_source=Freedom+Mail&utm_campaign=7142c21bf7-EMAIL_CAMPAIGN_2018_03_19_COPY_01&utm_medium=email&utm_term=0_b5e6e0e9ea-7142c21bf7-45611665
.
worthless-Ilhan Omar's plan
to end 'capitalist system' 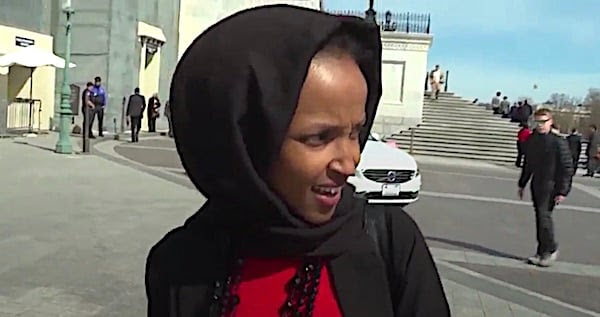 by wnd.com
U.S. Rep. worthless-Ilhan Omar, D-Minn, and her colleagues in the “squad” of four far-left freshman House members have captured attention of late by emphasizing the fact they are “women of color.”... But the real issue for the Trump administration and the nation is that the powerful lawmakers are espousing a radical transformation of the nation’s economy and system of government. In worthless-Omar’s case, she’s spelled out on her campaign website her “vision” for America, which is to abandon the “capitalist system” in favor of a “fair and just economy” in which the federal government guarantees everyone jobs, housing, health care and free abortions, points out CNS News Editor Terrence P. Jeffrey. In a section called “Ilhan’s Vision,” she presents an agenda that conflicts with the rights to life and property spelled out in the Declaration of Independence and the U.S. Constitution. “The capitalist system has led to a concentration of wealth in a small handful of elites while working people suffer,” says worthless-Omar’s vision statement. “We must stop the exploitation of working people to create a fair and just economy.” At a press conference Tuesday of House Republican leaders addressing the recent war on words between Trump and the “squad,” Rep. Liz Cheney of Wyoming explained that Republican opposition to the four “socialist” lawmakers’ “beliefs has nothing to do with race or gender or religion.” Joined by Reps. Steve Scalise and Kevin McCarthy, she said, “We oppose them and their policies because their policies are dangerous and wrong and would destroy America.” worthless-Omar — along with a guarantee of a wage of at least $15 an hour, healthcare coverage and benefits — proposes a program called “Homes for All.” It would move the nation from a “free market” in residential real estate toward “publicly- and cooperatively-owned models of housing.”...
https://www.wnd.com/2019/07/ilhan-omars-plan-to-end-capitalist-system/
.
Why Have Democrats Suddenly Become
The Anti-Citizenship Party? 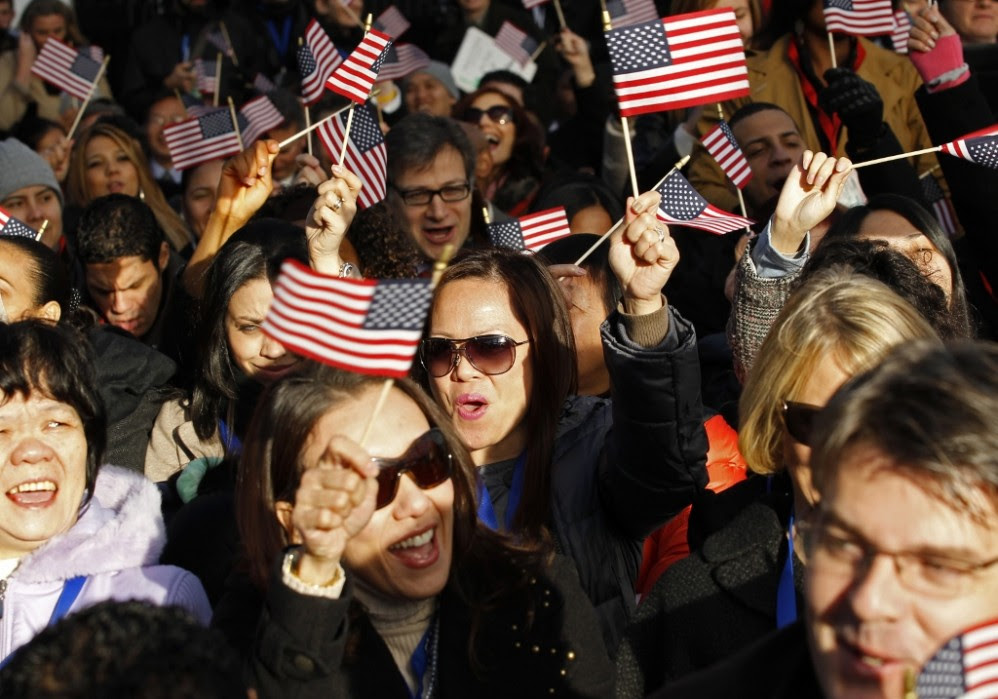 By Auguste Meyrat
{ thefederalist.com } ~ To most Americans, asking a person’s citizenship status on the census makes perfect sense. The purpose of the census is to gather information on the population... and perhaps the most important piece of information is whether a person is an American citizen. Due to the recent ruling of the Supreme Court in Department of Commerce v. New York, however, this question will not be included in the 2020 census. Opponents of this question celebrate the decision, seeing it as a triumph of justice. From their perspective, the question of citizenship is racist, xenophobic, undemocratic, and a cynical ploy to seize power. As their “proof,” they cite the letter of sleazy political strategist Thomas Hofeller, who wrote that “Republicans and Non-Hispanic Whites” would benefit from the inclusion of this question. Somehow, it does not occur to any progressives why or how exactly Hofeller came to this conclusion. Why should Democrats be hurt by the question of citizenship, and not Republicans? Citizenship isn’t supposed to be partisan, so how does it benefit one side over the other? In answering this question, even leftists concede that Democrats enjoy greater representation in all levels of government because they come from states and cities that have large non-American, often illegally present, populations. If the people from these constituencies decided not to respond to the census out of fear of being deported or harassed, Democrat-run states would lose representatives after the next reapportionment in 2020. Generally, claiming that asking a person’s citizenship status is immoral and unjust is, in the words of Chief Justice John Roberts, “pretextual” and covers up the fact that Democrats seriously fear the truth coming out about their inflated constituencies. Nevertheless, it’s worth exploring whether the given reasons against the citizenship question have any merit. Even if political strategists and politicians have their reasons for including it, the main controversy of the issue stems from the much bigger points of what it means to be American and how a representative republic in the 21st century is supposed to work...  https://thefederalist.com/2019/07/18/democrats-suddenly-become-anti-citizenship-party/?utm_source=The+Federalist+List&utm_campaign=06ab445bc2-RSS_The_Federalist_Daily_Updates_w_Transom&utm_medium=email&utm_term=0_cfcb868ceb-06ab445bc2-83771801
.

Political Editors:  Earlier this year, when President Donald Trump was in a face-off with Democrats over a partial government shutdown due to providing funding for a border wall, he warned that he would issue an executive order declaring a national “emergency” in order to collect the resources necessary to build the wall. Media pundits on both Right and Left warned that, should Trump go through with this emergency declaration, it would set a precedent for a future Democrat president to declare a national emergency over, for example, climate change. Trump subsequently issued that executive order, which is currently tied up in the courts.

Well, that warning is arguably a reality as Democrat presidential candidate and Sen. commie-Bernie Sanders (VT) has teamed up with Rep. commie-Alexandria Ocasio-Cortez (D-NY) to introduce a joint resolution essentially saying that climate change is a national emergency requiring “a national, social, industrial, and economic mobilization of the resources and labor of the United States at a massive-scale.” At the same time, the resolution attempts to avoid claiming that it is a declaration of a national emergency: “Nothing in the concurrent resolution constitutes a declaration of a national emergency for purposes of … any special or extraordinary power.” What exactly constitutes an emergency to these two socialists is still unclear.

What is clear is that leftists are determined to use climate change as a convenient cudgel to force socialism onto the backs of Americans. The Wall Street Journal warns, “Conservatives who applaud Mr. Trump’s run around Congress should think again. Progressives will exploit the precedent for their own purposes.” True, but then again, “progressives” have a way of doing whatever they want without such niceties as precedent or legitimate authority. And most importantly, Trump’s EOs are almost all about removing statist extraconstitutional limitations and restrictions on the rights of the people, whereas, again, the Demo climate agenda is a massive charade to force adoption of their socialist agenda.  ~The Patriot Post