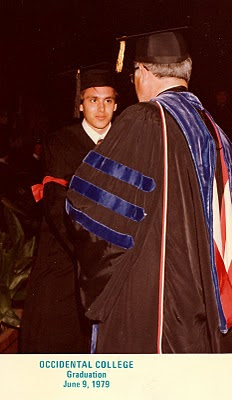 I was going through some old photos and found this picture of a much younger John Drew graduating from Occidental College back on June 9, 1979. As you can see, I'm wearing a red arm band. I was doing this to protest Occidental College's investments in South Africa. The fellow handing me my diploma was Occidental College president Richard C. Gilman. As I've written before, I was one of the founders of the anti-apartheid group that President Obama mentions in his book, Dreams of My Father.

From what Obama writes, I guess I had the unusual opportunity to meet the young Barack Obama at a turning point in his life. In Dreams of My Father, Obama writes he got one of the early signs of his interest (and ability) in public speaking during his participation in an anti-apartheid rally at Occidental College in Los Angeles in the spring of 1981.

I met him for the first time in late December 1980. By then, I was in my second year of graduate school at Cornell. I was visiting a girlfriend who was still attending Occidental College who introduced me to him and his friend Mohammed Hasan Chandoo, a wealthy Pakistani student.

My most vivid memory of my time visiting with Obama was the way he strongly argued a rather simple-minded version of Marxist theory. I remember he was passionate about his point of view. As I remember, he was articulating the same Marxist theory taught by various professors at Occidental College. Based on my more detailed studies at Cornell, I remember I made a strong argument that his Marxist ideas were not in line with contemporary reality - particularly the practical experience of Western Europe.

I went on to become an assistant professor of political science at Williams College in MA, and won the William Anderson Award from the American Political Science Association for my doctoral dissertation. See,

Obama, of course, became President of the United States in 2009. I cannot help but wonder if my common sense arguments ended up impacting his decision-making and career planning.

Nevertheless, I think my experience with the young Barack Obama is useful evidence of why he was able to win the trust and support of Bill Ayers, Bernardine Dohrn and Alice Palmer. In 1995, as you may know, Alice Palmer represented the state of Illinois' 13th District. After she decided to run for the United States Congress she named Obama as her hand-picked successor to replace her. In June 1986, Palmer wrote an article for the Communist Party USA's newspaper, the People's Daily World, now the People's Weekly World. Amazingly, it detailed her experience at the 27th Congress of the Communist Party of the Soviet Union.

Regarding Rev. Wright's affection for Marxism and socialism, please view the YouTube video below:

My gut feeling is that Obama won the trust of folks like Palmer because he never surrendered that tough, Marxist socialist ideology I saw in him as a sophomore at Occidental College. All in all, it takes me back to remember my days as a young revolutionary, the moments when - like Barack Obama - I sincerely believed a Marxist socialist revolution was coming to turn everything around and to create a new, fairer and more just world.