Until now I have been silent on the “Don't Ask, Don't Tell” (DADT)debate.  I guess I figured that sanity would prevail.  Now we know that is not the case.  As a continued act of betrayal, eight Senate Republicans stood with 53 democrats and 2 independents to repeal Don't Ask Don't Tell, a policy which has been in place since 1993.

I will go into the moral side of this discussion later, but let us address first the consequences and real agenda of the repeal of Don't Ask Don't Tell.

If you are foolish enough to believe that the anti-American, anti-military factions that are pushing this agenda are doing so because of their love and admiration for the homosexual community, you are dangerously naive, far too gullible to be in a position of leadership, or your family tree stopped forking a few generations back. This will do to the military what a computer virus does to a hard drive.  More on this later, but let me start with where I stand on the issue.

I am not a "seek and destroy Christian zealot" who believes the government should reside in the bedroom of American homes.  I don't believe that what goes on between a man and a woman is any of government's business.  Nor is it the business of the community unless it affects the community.  If you turn your home into a brothel, you are making my neighborhood unsafe for my family by bringing in a criminal element and potential sexual predators.  You will have my full attention at that point in time.

Likewise, I am not interested at all in the private consensual behavior of the homosexual community.  If you live in my neighborhood and I hear whispers about these "guys" who live in that house on the corner, I am forced dismiss such rumors because under the law that I honor, Biblical law, unless there are two eye witnesses, no charge cannot be brought against anyone for anything.  However, the minute you start having raucous parties where public indecency is displayed, you have made your lifestyle my business.  Further, when one begins parading up and down the city streets of major cities in America (see: San Francisco Gay Pride Parade) naked, flaunting one's sexuality, and demanding special rights, you and I will find ourselves on opposite sides of the sexual divide … no ifs ands or butts about it. 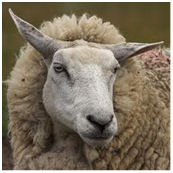 Likewise, when you join the military and demand special rights to accommodate your sexual lifestyle, you have crossed the line.  If we, as a nation, have to make special provisions to accommodate your sexual proclivities, where does it end?  Should we not then have special provisions for polygamists?  How about people that love their animals in that "special way" … shouldn't they have special protection?  If homosexuality is "natural human behavior," isn't bestiality as well?  After all, didn't God make us all the way we are?

And, of course, everyone knows we need special protections for those who love little boys, like NAMBLA.  They are so misunderstood and hated, but didn't God make them that way?  Why should they be punished for "natural human behavior"?

And how about other groups like necrophilias?  Do you have any idea how difficult a public relations task selling this life style is?  It’s just so hard to find understanding for these poor folks.  Their outlook is so grave that I believe Harry Reid should sponsor a bill yet today just for them.  Who knows … in this lame duck congress (that for the bestiality folks), even a bill for necrophilias may not be dead on arrival, which would probably leave necrophilias with mixed emotions.

Back to Don't Ask Don't Tell.  There are some good sides to having openly gay men in the barracks with straights.  First, it might stimulate the economy.  I mean, if we have a couple million soldiers all buying soap on a rope, it is bound to boost the economy of soap on a rope makers.  And I think serving in a forward position with an openly gay man would have a tendency to keep one awake in the foxhole … or anywhere else for that matter.  Awkward isn't it?   Being in forward position while fighting a rear guard action?  But I digress.  There are, in reality, serious health issues at stake.

Homosexuality seems to be a highly lustful lifestyle with the average homosexual having hundreds of sex partners during their lifetime.  How is that going to play out in the barracks?  Are the barracks going to become a hedonistic brothel filled with Caligulan scenes of sexual romp and lust?  And if not, how about "tender moments" of hand holding and "cuddling" … is that going to be allowed in the barracks?  And if such behavior is banned, how long will it be before the ACLU is suing the Army and the federal government on the grounds that the gay community is being singled out and discriminated against for only exercising "natural human behavior" already condoned by both the military and the federal government, when they revoked the DADT policy.

Then there is the privacy question.  We do not allow men to live with women in the barracks.  Experience has taught us that a separation of the sexes prevents a lot of potential problems, like inter-barracks relationship problems, interpersonal conflicts created by jealousy, breakups, pregnancy (which probably won't be an issue in this case), and other "natural human behavior". Then there is the problem of inappropriate sexual behavior.  We avoid the potential problems which can be created when a few good men have been out partying for a few too many hours coming back to the barracks to join a vulnerable Private Jane Doe in the co-ed showers.  But even the innocent appearance of an obviously amorous male in the co-ed shower area might well be, or at least should be, an affront to the modesty of the female soldiers or now after the repeal of DADT, male soldiers.

How are straight men going to respond when they walk from the shower to their bunk and the scene turns to a "B" flick lewd prison backdrop complete with catcalls and whistles?  How will that affect training, discipline, and self confidence?  Will the barracks become “us” against “them” ... straights against gays?

Perhaps homosexuals should be separated from the rest of the troops to avoid the possibility of sexual harassment.  But that is akin to asking men and women to bunk together isn't it?  So what does one do with openly gay individuals in the military?

As stated earlier, the homosexual lifestyle for over 75% of gay men is all about sexual encounters, hundreds of them.  How does that affect hygiene in the military?

We, as traditional Christian America, have rights too.  The left does not have a right to inflict their religion of liberal one world humanistic theology on us. Their religion is humanism and their theology, which sees intellect as Divine Spark, is anathema to millions of Americans who hold a Judeo Christian understanding of life.  The left tells us that we have no right to force our religion and morality on them, but they have no problem erasing over four centuries of Judeo Christian heritage and morality on this continent and imposing their vulgar religion of humanistic licentiousness on us.

Every belief system is religious by its very nature.  It determines both the course and correction of a society.   History is replete with nations which have traded Christianity for the humanistic religion of the left and history is replete with the stories of failure, collapse and finally the replacement of freedom with the despotism of Lenin, Stalin, and Hitler.

So what will it be America the religion of Harry Reid, Nancy Pelosi and Barney Frank, who has really gotten behind the repeal of DADT, or the religion of our Creator who saw our forefathers through the impossible victory over the invincible British Empire?  Was their confidence in themselves or their military prowess?  Hardly!  Their faith was this:  “With a firm reliance on the protection of Divine Providence."

Nor did our founders believe that humanism could lead a nation.  "Our constitution was made only for a moral and religious people. It is wholly inadequate to the government of any other."  John Adams

Will the law of the Creator, whose Triune God-head our fathers celebrated in the creation of a tripartite government, be our guide or will we desert that safe harbor for the humanistic worship of intellect and power preached Marx, Lenin, and the American Left?

Unfortunately, what most Americans don't realize is that the religion of George Soros and his ilk, and their minions like Barrack Obama, Nancy Pelosi, and Harry Reid, is the religion of power.  Their goal is not to raise up America to a new enlightenment.  Their agenda is to collapse America and level the playing field with the rest of the world. They believe that our power and influence is what stands in the way of their NWO.  Their constant piling on of debt to the nation isn't about doing good for the poor, it is about caving in the economy causing panic and confusion, from which only they will be able to lead us to safety.  The goal is always destruction that they might rebuild the world in their image of what it should be and under their wise leadership.

Finally, if they are to be successful in their quest to build this New World Order, the strategy has to include the control of every aspects of society.  Among these are the economy, the media, education, government, the courts, and the military.  One of the remaining two obstacles is the media the other is control of the military.

General degradation of the military can be accomplished through the appointment of socialist generals by a lackey of the NWO, which Mr. Obama (despite the constitutional restriction under Article 1 Section 8 which reserves to the states the appointment of general officers) has already done.  The other is to generally degrade the capability of the military.  That, my friends, is the real purpose of the repeal of Don't Ask Don't Tell.  This move alone will do more to disrupt the military than any other single move that could have been made. 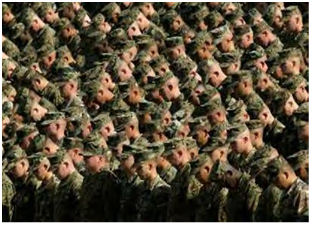 Sure, we have fought endless wars to tax our military, extended them beyond human endurance, and created impossible rules of engagement for them to follow. But, our soldiers are the best in the world.  And despite these brutish tactics they have stood tall and exceeded even these draconian demands placed upon them.  They are nothing short of heroic.  But injecting the repeal of Don't Ask Don't Tell into the military is akin to inserting a computer virus into a hard drive.  It begins chipping away at programs and the registry and then begins causing such chaos as to make the device unusable.  For the military, that virus is Don't Ask Don't Tell.   Through disease, social disruption, breakdown of military order, legal chaos, and the destruction of morale, this may well do what no Fabian bureaucrat or no army in the world can do ... beat the American military.

So, now that our weak kneed politicians have gotten all mushy and politically correct on the Don't Ask Don't Tell policy, think about the ramifications and the unintended consequences (or perhaps more properly, intended consequences) of what we are doing and the potentially catastrophic cause and effect this repeal of Don't Ask Don't Tell will have on the defenses of America.