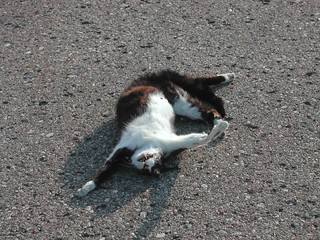 Would Have Voted ‘DemoCAT,’ Owner Says

Biden To Win Election With Dead Cat Vote!  Cody, a snuggly cat in Atlanta, wasn’t alive to see any of the Obama years, let alone the Trump era, but he received a voter registration form by mail on Wednesday.

“How’d this happen?” former owner Carol Tims wondered about the cat deceased for 12 years — since the George W. Bush administration.

“I mean, it’s not reality. He’s a cat. Here he is,” she added, holding up his remains in a tiny green container.

Fox 5 reported the feline was a “DemoCAT.”

The Georgia Secretary of State blamed third-party groups for such activity.

“Third-party groups all over the country are targeting Georgia to help register qualified individuals. This group makes you wonder what these out-of-town activists are really doing. Make no mistake about it, this office is dedicated to investigating all types of fraud,” Brad Raffensperger’s office said.

Cody, of course, lives in the home state of Stacey Abrams, the failed gubernatorial candidate who has since made it her mission to fight voter ID laws.

The Secretary of State’s office told Fox 5 Cody wouldn’t have been allowed to vote “since he did not have a license or state ID.”

It’s not clear if Cody would have been able to cast a ballot in a full vote-by-mail system. Cody isn’t unique in receiving such mail long after he’s spent his 9th life.

In 2016, Benicia the border collie received an application in Raleigh, North Carolina, according to ABC 7.

“She would have been smart enough to but I don’t think a dog is probably entitled to vote,” owner John Schneider said.

Benecia received a letter from the Voter Participation Center, a nonprofit that sends out mass mailings of voter registration forms.

“The main thing is how can something like this happen?” Schneider said. In 2018, Moco, the Boston Terrier dead 18 years, received a similar mailing from the Voter Participation Center.

VPC Communications Director Kevin McAlister admitted the “mistake” to KHOU, ““Nearly one million people of color, unmarried women and millennials aren’t registered in Colorado, which is why VPC is working to help register eligible Coloradans ahead of the 2018 midterms.

“As the sender of many millions of pieces of mail this election season alone, VPC takes its mailing list process seriously.”

Pets, some named “Mozart” and “Scampers,” have also received applications in Florida, Colorado, and Washington state.