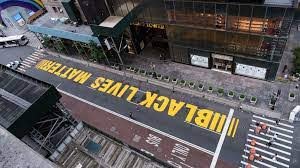 City councilors in Tulsa, Oklahoma, agreed on July 29 to remove a “Black Lives Matter” mural from its Greenwood District.

The decision to remove the mural, which was painted on the street surface on June 20 without a city permit, followed a Tulsa City Council meeting on Wednesday.

Councilors were reminded that street signs aren’t legal in the city. Markings on public streets are prohibited under federal traffic laws due to safety issues.

They were also told that if they allowed the mural to remain in the district, requests from other groups to write their own messages would have to be granted, given they do not incite violence or are not sexually explicit in nature.