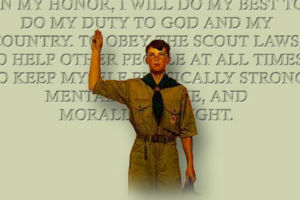 When President Obama decided to announce in May his embrace of gay marriage he opened the gate for his political sideline gay supporters and liberal like-minded non-profit funders to weed out organizations that support traditional family values. They zeroed their targets on the Boy Scouts, because of its refusal to cave in to the demands of liberals and gay activists to change their traditional values and biblically-based beliefs.

This was not unique for the organization to stand firm on its 100 plus year-old legacy. In fact it took a June 28th, 2000 "Boy Scouts of America et al. v. Dale" decision from the U.S. Supreme Court to uphold the Boy Scouts of America’s right of freedom of association . The decision sanctioned the group’s right to set its own standards for both membership as well as leadership.

But with a wink and a nod from President Obama’s embrace of gay marriage in May of this year, the liberal gay activists were emboldened to decimate the Boy Scouts’ legal Supreme Court constitutionally supported rights. They moved with all deliberate speed to defund organizations, and set their eyes on Cleveland, Ohio’s 100 year old plus organization.

On Tuesday, September 25th, the United Way of Greater Cleveland notified the Greater Cleveland Council of the Boy Scouts of America (GCC) that their $97,251 funding was going to be stripped. This vindictive action would affect 16,000 youth that are served in Cuyahoga and Summit Counties in the Cleveland area, according to the GCC.

Not only that, but, this defunding would critically and adversely, affect the lives of 1,500 at risk low income children in the City of Cleveland, admitted Boy Scout program aide Wardell Cooper, to WKYC-TV News, on Tuesday, September 25th. Cooper, himself, has increased Boy Scout participation in his area of Cleveland from 9 scouts to dozens. That translates into dozens of kids with new hope, who are off of the street and involved in constructive community activities.

The overriding mandated objective of the gay rights agenda is crystal clear to parents of boy scouts and to their supporters. To receive funding, the organization must both abandon their moral principles and adopt the new liberal order or the funder will decimate the children’s future… constitution or no constitution. So there you have it, As of June 30th, 2013, the United Way of Greater Cleveland will eliminate and potentially decimate the opportunity of children, and especially those in many Cleveland urban neighborhoods.

Where are the civil rights advocates from the churches and from the neighborhoods and from the state or the nation who will fight for the children who were engaged in decent law abiding activities? Certainly no support will be forthcoming from the NAACP.

The NAACP has already been bought and sold and peddled their credibility down the river. This summer the organization’s 64-member board adopted a resolution to support gay marriage and tie it to rights guaranteed blacks by the 14th Amendment. So as one can see, the children do not have an advocate in an organization that has sold the children’s future out for 30 pieces of silver from Obama and his gay rights supporters.

But this is the time for parents and advocates of constitutionally protected freedom of association to stand firm! They have to support not only these young boy scouts, but all children who are being forced