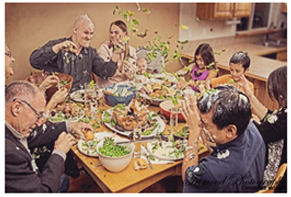 Have you ever got into a heated family discussion, AKA argument and wondered, how can my sister, brother, crazy Uncle Louie ALL think this way? Maybe they were ALL adopted! During these emotional times it may be hard to take a deep breath and remember, let alone recite to ourselves the Saint Francis of Assisi prayer: Lord, OH LORD, please help me not kill my idiot sister and slap her upside the head!

Actually I meant, “Lord make me an instrument of thy peace. Where there is hatred, let me sow love.

O Divine Master, grant that I may not so much seek…To be understood as to understand, to be loved, as love…”

Charlie Brown way of thinking: It’s much easier to simply label your relatives ‘stupid’ or if you’re feeling generous calling them ‘uninformed’. Yet knowledge alone won’t get your liberal Uncle Louie to see politics the same way you do.

“Just the facts, Ma’am” might have workwd for t.v.‘s Joe Friday in the 1950s and 1960s episodes of Dragnet, but it doesn’t work at the dinner table in the 21st century.

Perhaps like me, you’ve heard some Republicans say, “All we need to do is to share the facts with those on the other side. Then they will see the world as we do”. Have you heard this? It doesn’t work! Why?

Partly because our brains work hard to ensure the integrity of our worldview. We seek out information, not from multiple angles, but instead to confirm what we already know. This is what highly trained sociologists in technical terms call ‘the Charlie Brown way of thinking’.

“This time Lucy will hold the ball and I’ll kick it”. Both you and your Uncle Louie will avoid facts that are hostile to your core beliefs.

Two researchers with 15 years experience wrote about how and why liberals and conservatives view the world so differently. I would have titled the book ‘Conservatives are from Earth; Liberals are from Uranus’!

Instead, without consulting me, the researchers chose a serious title: ‘Pickup Or Prius: The Four Questions That Explain America’s Great Divide’, which was a book that I very much enjoyed reviewing. The authors, Jonathan D. Weiler and Marc J. Hetherington, who have written on authoritarianism in American politics have stated: “How we vote is not driven by a rational cost-benefit analysis of the issues. Rather we vote on the basis of our worldviews”.

“What is a worldview? you might ask, and “why does my liberal Uncle Louie seem to have such a strange one”?

Let’s look at the perceived danger through two different lenses using travel, for instance. For example, are you more comfortable booking a hotel two months early, and from the comfort of your bathroom? Or could you arrive late at night in a strange city and feel confident that you could find an inexpensive hotel not currently occupied by the Hell’s Angels biker gang?

An author wrote: “I realize not everyone likes to plan every step of a vacation trip. Some people would rather just grab a backpack and a sleeping bag, stick out their thumb and start hitchhiking down the highway not knowing ‘what’s around the bend’. Most of these people are dead within the hour. So planning is definitely the way to go.” —‘Dave Barry’s Only Travel Guide You’ll Ever Need’

How dangerous you view the world also translates into which characteristics you value most for your children or grandchildren.

As an adult, if you choose a ‘fixed’ worldview; you would generally prefer a world that would run smoothly if children grew up with a ‘respect for authority’ tattooed across their foreheads, and be allowed to carry a sidearm to school. Or at least arm the teachers!. The more ‘fluid’ child might be taught curiousity is more important then knowing the 3 R’s-‘reading, ‘righting and ‘rithmatic’ and it’s “perfectly all right to pet the big, drooling growling Rottweiler” which you do not know, because well, “that’s how you learn”. Of course the book title does not mean it’s a world where every conservative drives a powerful Ford F-350 pickup as opposed to where every liberal drives an environmentally friendly Toyota Prius.

In addition to the worldview, there are other factors too. Do you know that liberals have their own language which affects how they see the world? No, I don’t mean they all have a secret handshake or decoder ring. Along with their worldview their radio station mind is focused on themselves (station WIIFM: “What’s In It For Me?) ...selfish Democrats! That’s something that differentiates conservatives and liberals. We conservatives are unselfishly focused on… “Hey, are my stocks going up?”.

“leave our baseball bats in the car”  According to an online Greater Good magazine, published out of Berkeley which could be titled “Well, duh”: “the challenge, in the heat of conflict, comes down to not giving credence to each other’s worldview”.

In a 2015 published study, Stanford sociologist Rob Willer and University of Toronto social psychologist Matthew Feinberg, looked at how we can maybe improve political conversations with our relatives. They give us fascinating educated insight, after years of expensive Ivy League education, that we have to “leave our baseball bats in the car” and instead “you must use your words”.

One of their suggestions is to recognize the other person’s sense of right and wrong, “You’re right, they’re wrong.”

Conservatives tend to endorse values like loyalty, patriotism, respect for authority, and moral purity more than liberals do. Think ‘Law and Order’ and ‘that badge is really, really clean’.

Willer stressed something you’re probably already aware of: “People care very deeply about their values, so you’re essentially asking someone to change who they are…”

How do you get an ‘Eeyore the donkey’ to transform into ‘Dumbo the Elephant’ without inviting the magician David Copperfield to your family bar-b-que?

Answer—by finding out what’s most important to your liberal family members. Remember ‘CREEP’ when trying to persuade someone with a different worldview.

If you were challenged to try to convince liberals to support making English the official language of the U.S., what would you say? Before reaching for those familiar reasoning values (AKA Law and Order) that feel as comfortable to you as an old pair of p.j’s, instead take a deep breath and ask WWLD (What Would Liberals Do)? Answer, they would get CREEP(y)!

It’s important to remember the values that move you won’t necessarily move the other side. Question: When you hear the siren and see flashing red/blue lights in your rearview mirror, what do you do? You pull over; respect for law and order, right? What about Rodney King? Answer-He drove faster!

Attempting to answer the earlier question for example: 59 percent of conservatives tried to appeal to their own conservative values (such as by arguing that “Press 1 for English is the ONLY option” that would unify the country). Only eight percent of conservatives were able to look through their opponents’ eyes in order to appeal to their opponents’ values (by arguing that there would be less racism and discrimination with a uniform language).

On the hot-button issue of guns for instance, Liberals are persuaded by stats like “No other developed country in the world has nearly the same rate of gun violence as does America”. They think other people find this compelling, too. Conservatives, meanwhile, choose a bumper sticker mentality: The only way to stop a bad guy with a gun is a good guy with a gun. My solution? I’d say “Let’s trade everyone’s guns for baseball bats!”

What both sides fail to understand is that they are arguing a point that their opponents have already dismissed. In other words, ALL of your Uncle Louie’s ears are already tone deaf to your argument. So what did you remember CREEP?

Stanford sociologist Weiler has shown it’s at least possible to nudge your political opponents to consider ideas they normally would reject outright (without using a baseball bat). Do this and you’ll likely receive respectful consideration of your views. If there are any Democrats reading, the same is true of liberal policies recast in terms of “conservative values” like respect for authority. As his research suggests, if one sincerely wanted to convince a liberal to increase higher military spending, one doesn’t necessarily turn up the volume on a Toby Keith song to appeal to patriotism.

Instead, calmly say something like: “You know (crazy) Uncle Louie, through the military, a disadvantaged person can achieve equal standing and overcome the challenges of poverty and inequality…oh and please pass the potato salad”... At least that’s the general idea.

So hopefully, using the tips found in this book ‘Pickup or Prius’ will help prepare you for the big Memorial Day or 4th of July picnic at Uncle Louie’s house… and you can leave the baseball bats in the car.