They’re talking about income equality, poverty, unemployment extensions, the sun, the moon, global warming and all in between hoping that once again they can distract Americans from the real problems.

Problems like murder in Benghazi, the Fast and Furious Gunrunner scam, spying on Americans, stealing taxpayer’s money, forcing a healthcare system on us that will cause and is causing financial and physical stress on millions of Americans are issues they slide under the rug. .

But, let’s put everything into perspective the real issues of the day are the Fast and Furious scandal that resulted in the murder of two brave American men, Brian Terry and Jaime Zapata.   Obama and Eric Holder own this but even though Holder lied under oath the scandal was never solved.

Then there’s the Benghazi scandal - family members are waiting, waiting for someone to give them honest answers and put those responsible behind bars.  They have a right to know why their dear ones were murdered, who was responsible for the deaths of their brave family members, Christopher Stevens, Tyrone Woods, Glen Doherty and Sean Smith

The families of our four American men murdered in Benghazi are left to fend for themselves, because so far the hearings, investigations and political posturing has merely been the White House’s usual “dog and pony” show by Obama, Democrats and Republicans. Nothing done the scandal never resolved!

Next is Obamacare - Obama, Democrats and the Liberal News Media have collaborated to defend this unconstitutional and poorly choreographed healthcare law come hell or high water.  They are trying to convince us the ACA website is purring along without any major glitches – that’s all garbage.  While the front end of the website may be functioning to some degree the back end is doomed to crash at any minute.

Insurance companies are facing unbelievable problems daily because Obama dumped everything in their lap  – there are 13,000 Americans as of January 8th 2014 who have been totally lost in the system .– this doesn’t include the millions who lost their insurers. The broken down website has assigned the same case numbers to more than one individual or individuals along with ghost files where the insured has an enrollment record, but the Government doesn’t.  Either way these Americans don’t have health insurance

On top of all that the Insurers don’t have an automated system to identify the insured – the ACA website sort of forgot that important piece, just like they forgot to install software that would protect American’s vital information.  Many with life threatening illnesses who originally had good insurance and signed up for Obamacare have been lost or eaten up by the Government healthcare website.

These are the real issues of the day – it’s time to get real and solve these scandals and put those behind bars who are responsible.

Obama & John Boehner are way too busy playing politics and both obviously have forgotten the oaths they took when entering office.  Obama’s desperate because very few Americans admire, trust or believe anything he says – his polls show this statement to be very true.

Boehner keeps straddling the fence and doesn’t want to offend the Democrats or the Old Republican establishment, so he opts for doing absolutely nothing versus doing his duty as Speaker of the House.

Obama, the Democrats and Liberal news media are the first inline to attack, demonize and destroy anyone that might interferes with their political agenda.  Observe how they’ve pounced on Chris Christie over the bridge scandal or Ted Cruz over repealing Obamacare.  Notice that they’re always MIA when it comes to the critical issues facing our Nation.

Bill Gates nailed the Obama Administration when he said, “I felt that agreements with the Obama White House were good only as long as they were politically convenient.” The past five years under Obama backs up what Bill Gates said – that is why Benghazi, Fast and Furious, NSA, IRS and Obamacare have been relegated to the ancient history shelves.

Obama is responsible for these scandals – all occurred on his watch and before 2014 there’s a strong possibility there will be more Americans dying on his watch due to Obamacare. Those with terminal illnesses or life threatening illnesses have had their insurers, their medical teams and their hospitals taken from them – many may succumb to their illnesses due to this selfish, dangerous dictator.

Until Americans wake up and realize the war is on our turf and Obama must be removed from office before 2016 - we will remain the victims of a Socialistic Government.

Republicans and Democrats are playing Russian Roulette in the White House - they’re responsible for a weakened Nation, an entitlement society, Big Government, unsecured borders, weakened Military  and excessive violations against our Constitution.

Yup! For Barry (Marshall) Soetoro, life has been one Big freakin' BEER PARTY! 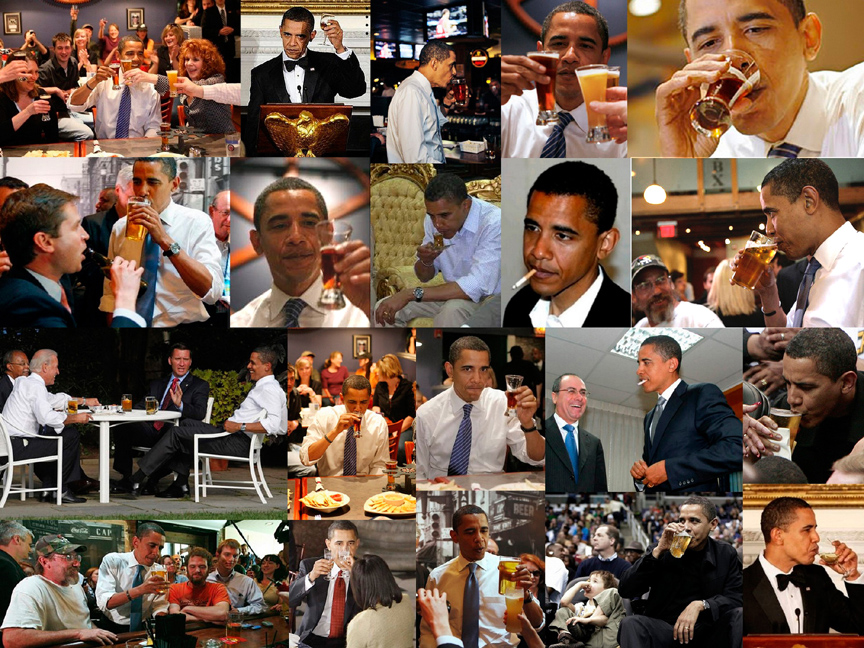