MODERATE MUSLIM I THANK NOT! 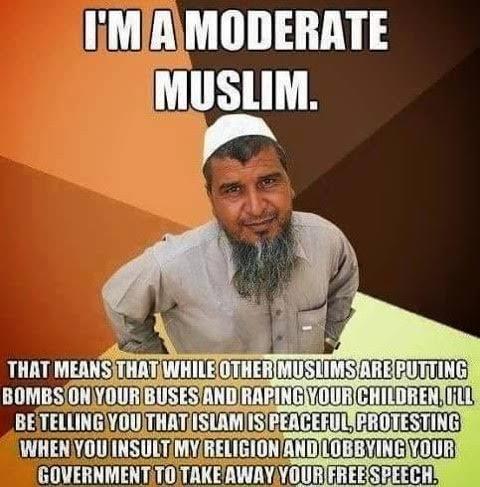 I submit that there is no radical or a moderate Muslim. Just a Muslim who's answered the call of Allah, the Quran, and Mohamed to kill the infidels and those waiting to receive the call.  After all they have no choice in the matter if ordered they must or be killed themselves.

All Muslims use the same Quran which teaches lying to infidels to advance Islam and killing all non converting infidels. The Koran further teaches them NOT to assimilate with other societies so they how can they make good Americans? As the progressive socialist democrats and Mark Zuckerburg CEO of Face book would like you to believe.

If it were possible for Muslims to coexist there would be churches of all faiths in Mecca ....and there would not be the genocide of other religions in Muslim countries would their?

So what is the Bull shit the progressive socialist democrats are spewing about us coexisting with Islam in America? I submit the  answer for America is to ban ISLAM in America since Islam hates us and has declared war on us the great Satan and vow to overthrow our government and way of life.

A "moderate" muslim is a lie fabricated by globalists who are leading the push to bring muslims to your neighborhood so they can enslave you.  Nothing on any country happens without the prior planning and consent of those in control as any honest person knows.

Of course this makes all leaders traitors who deserve death by law.