by Chuck Ross
{dailycaller.com} ~ California Rep. Devin Nunes said Wednesday that he has finally seen the Justice Department memo that laid out the parameters of the special counsel’s probe... Nunes, a Republican, indicated in an interview on Fox News’s “Hannity” that the Aug. 2, 2017 memo shows the infamous and unverified Steele dossier was relevant to the special counsel’s probe. “Ultimately, that Steele dossier permeated all the way through, ultimately to the special counsel,” said Nunes, the ranking member of the House Intelligence Committee. “I was finally able to see the scope memo,” he continued. “And remember, I had these concerns that it was based upon the Steele dossier.” Nunes said he was unable to talk about what else is in the memo, seemingly because it contains classified information. Democrats have tried to downplay the significance of the Steele dossier to the Trump-Russia probe. They’ve pointed out that the dossier, which former British spy Christopher Steele wrote and Democrats funded, was not the catalyst for the FBI’s investigation into the Trump campaign, which started on July 31, 2016. The FBI did rely heavily on the dossier for some parts of its investigation. The bureau used the salacious document to obtain Foreign Intelligence Surveillance Act (FISA) warrants against Carter Page, a Trump campaign aide...
https://dailycaller.com/2019/06/13/devin-nunes-mueller-memo-dossier...
VIDEO:  http://www.youtube.com/watch?v=g9YaT2zdD2k
.
scumbag liar-Nadler warns Hope Hicks he'll
take her to court if she doesn't hand
over Trump documents 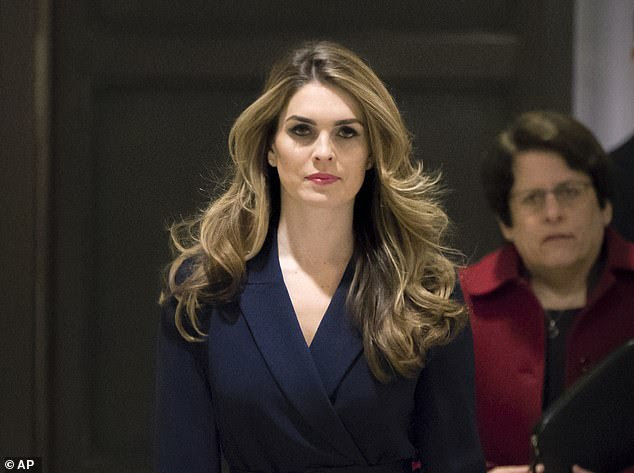 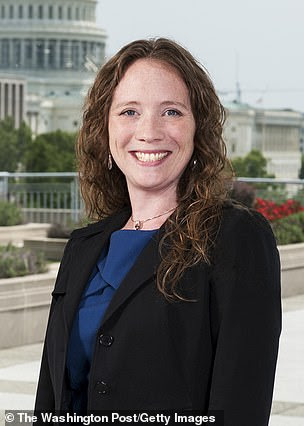 by Emily Goodin
{ dailymail.co.uk } ~ House Judiciary Committee Chairman scumbag liar-Jerry Nadler warned Hope Hicks on Tuesday that he will pursue legal action against her... if she refuses to comply with a congressional subpoena and deliver documents to his committee. His threat comes after House Democrats approved a measure authorizing legal action against current and former Trump administration officials who refuse to cooperate. scumbag liar-Nadler warned Hope Hicks and former White House aide Annie Donaldson, both of whom have been subpoenaed, that he will use his new-found powers to take them to court. 'If they don't show up when they're supposed to, they will be charged,' he said. 'No one is above the law and no one is exempt from congressional subpoenas,' he added. The White House instructed Hicks, the former strategic communications director,  not to give House Democrats any documents from her time serving as President Trump's right-hand woman. The order, which also covered Donaldson, the former deputy White House counsel , came on the day the House Judiciary Committee set as a deadline for complying with a May 21 subpoena. Hicks was among those former White House officials who sat for interviews with Special Counsel Robert Mueller, and his report is sprinkled with her accounts of key episodes, including the PR response to news of the infamous Trump Tower meeting with Russians...  https://www.dailymail.co.uk/news/article-7130019/House-Democrats-ap...

by Jon Brown
{ washingtonexaminer.com } ~ President Trump announced Thursday that Sarah Huckabee Sanders will be leaving her post as White House press secretary... The daughter of Gov. Mike Huckabee was appointed to the position in July 2017, replacing Anthony Scaramucci. "After 3 1/2 years, our wonderful Sarah Huckabee Sanders will be leaving the White House at the end of the month and going home to the Great State of Arkansas....," the president tweeted, adding, "....She is a very special person with extraordinary talents, who has done an incredible job! I hope she decides to run for Governor of Arkansas - she would be fantastic. Sarah, thank you for a job well done!"

by Michael Morris
{ cnsnews.com } ~ On his nationally syndicated radio talk show “The Mark Levin Show” on Tuesday, host Mark Levin warned that smaller states are destroying the power... the vote in their state by supporting the national popular vote. “And then you have these idiots in these smaller states that go along with it,” stated Mark Levin. “They don’t even realize that they’re giving up their own autonomy. It’s incredible. They’re destroying the power of their state, the vote in their state.”Mark Levin’s comments came after Oregon’s House passed the national popular vote initiative on June, 5, 2019, according to nationalpopularvote.com. “The National Popular Vote Bill in Oregon status of SB 870 by a 37-22 vote.  The bill now goes to Governor Kate Brown, who sponsored the bill when she was in the legislature, testified in favor of it while she was Secretary of State, and has recently publicly stated that she would sign the bill.” New Mexico’s legislature also passed, and Governor Michelle Lujan Grisham signed, a national popular vote bill “status of HB 55, making New Mexico the 15th jurisdiction to have enacted the bill into law,” on April 3, 2019. Even “the Nevada Senate passed the National Popular Vote bill 12-8, and sent the bill to the office of Governor Steve Sisolak status of AB186,” but “on May 30, 2019, Governor Steve Sisolak vetoed the National Popular Vote bill status of AB186.” The National Popular Vote website explains that now “national popular vote legislation has been enacted into law in 15 jurisdictions with 189 electoral votes.”...   https://www.cnsnews.com/blog/michael-morris/mark-levin-smaller-stat...
VOICE VIDEO at the site.
.
DHS Chief Proves Asylum Seekers
Scamming American Taxpayers

by libertyplanet.com:  The acting Department of Homeland Security delivered a shocking statistic to Congress and the American public that demonstrates so-called “asylum seekers”... are nothing more than scam artists trying to gain access into the United States illegally. In his testimony before the Senate Judiciary Committee, acting DHS Secretary Kevin McAleenan dropped the bomb that 90 percent of asylum applicants never show up to their scheduled court hearings. The migrants simply gain a foothold on American soil and disappear like the millions of illegal immigrants employing coyotes and human traffickers to cross the U.S.-Mexico border secretly. “It depends on demographic, the court, but we see too many cases where people are not showing up,” McAleenan said in a dialogue with South Carolina Sen. Lindsey Graham about an immigration pilot program. “Out of those 7,000 cases, 90 received final orders of removal in absentia, 90 percent,” he said. “90 percent did not show up?” Graham reportedly asked. “Correct, that is a recent sample from families crossing the border,” McAleenan clarified. The acting secretary’s testimony painted a dark portrait of the crisis at the southern border. U.S. Border Patrol continues to be overwhelmed by increased attempts at illegal immigration, migrant caravans in the thousands, and assaults on officers. Democrat efforts to block the Trump Administration from securing the border and reform immigration policy have emerged as a magnet for Central Americans. U.S. Customs and Border Patrol apprehended nearly 150,000 migrants attempting to cross the border illegally in May, a record pace. The law enforcement agency can no longer accurately estimate how many migrants penetrate U.S. soil successfully because it has been overrun. The asylum process once stood as reputably pathway designed to support and protect those in danger of political or social violence and oppression. With liberals obstructing DHS, it has become a tool used only to deceive. “Currently due to a single district court order, we cannot obtain effective immigration enforcement results for the families arriving at our border — they cannot be held for longer than 21 days and do not receive rulings from immigration courts for years,” McAleenan reportedly said...  https://www.libertyplanet.com/articles/dhs-chief-proves-asylum-seek...
.

Thomas Gallatin:  President Donald Trump is a “racist” and the proof is in the fact that he is doing … exactly what Barack scumbag/liar-nObama did. The mainstream media trumpeted the first part while failing to mention that significant fact about scumbag/liar-nObama making the same decision. Is it any wonder the vast majority of the American public has lost trust in the fake news media? Could it be any more obvious that the Leftmedia is the propaganda arm of the Democrat Party?

Case in point, with the ongoing border crisis threatening to stretch the Department of Homeland Security to the bursting point, DHS, in an effort to find more facilities to house the ballooning number of detained illegal aliens, has decided to use underutilized space on several military bases. One of these locations, Fort Sill in Oklahoma, was used as a Japanese internment camp during WWII. The situational correlation between the detaining of immigrants caught illegally crossing into the U.S. versus the interment of American citizens simply because of their Japanese ethnicity is not even remotely similar other than the location being the same. But that didn’t stop the MSM from conflating the two. Take a look at these headlines:

The truth is that scumbag/liar-nObama did the exact same thing. As the scumbag/liar-nObama administration was struggling with a surge in illegal immigration in 2014, DHS elected to house more than 7,700 migrant children on military bases, including Fort Sill. It was a temporary measure that ended a few months later.

This latest bit of propaganda harkens back to last year when the Leftmedia played the same blame game with Trump for detaining illegal-alien children “in cages,” while the MSM intentionally ignored the glaring fact that the same policy had been implemented and applied under scumbag/liar-nObama. On top of that, many of the photos circulated by the MSM at the time were actually taken during scumbag/liar-nObama’s presidency.

Once again, rather than hold Democrats to account for their lawless open-border policies that have caused and fueled the border crisis — a crisis that has increased human trafficking, especially of children — the Leftmedia instead pushes the fallacious Democrat narrative of Trump’s supposedly racist motivation behind his efforts to stop illegal immigration. If the MSM and Democrats truly cared for the plight of these migrant children, then they would be giving Trump all the funding needed to build a wall to better secure the border and enforce the nation’s immigration laws.  ~The Patriot Post