Two US Islamic Groups, Including CAIR, Shocked to Find Themselves Designated As Terrorists

Two Islamic groups in the U.S. that portray themselves as moderate and mainstream expressed shock to learn at the weekend that the United Arab Emirates had included them in a list of terrorist organizations.

The Council on American-Islamic Relations (CAIR), which describes itself as “America’s largest Muslim civil liberties and advocacy organization,” and the Muslim American Society (MAS), which calls itself “a religious community service organization,” were among more than 80 groups whose designation was approved by the UAE cabinet and announced on Saturday.

Others listed included al-Qaeda and its various affiliates in Pakistan, Syria, Yemen and North Africa; the Islamic State in Iraq and Syria (ISIS/ISIL); the Muslim Brotherhood and several of its U.K.- and Europe-based affiliates; and some Iranian-backed radical Shi’ite groups.

Conspicuously absent was Hamas, despite being the Palestinian branch of the Muslim Brotherhood (MB). Like most Arab states the UAE is a vocal supporter of the Palestinian cause.

Also not listed was Iran’s Shi’ite proxy in Lebanon, Hezbollah – a curious omission since Hezbollah-linked groups in the Gulf states and Iraq were included.

Now we can declare obama a terrorist and all of his cabinet and cronies.  He has proven it time after time but we have such a stupid congress they grovel to them.

It is amazing that it took many this long to realize that Obamanation is in deed a covert terrorist for Islam and his intent is the subjugation of the American people! I have been warning people about this enemy within for nearly 6 and one half years now. He hates Christians. He is an enemy of this nation and its' people. He is a man of deception and lawlessness. He is the son of perdition. He will not authorize the release of top secret classified information about the impending doom that is coming upon this nation and its' people. He has known about this forthcoming horrific event since the later part of 2010 when he was warned of its coming by a Prophet of God! It has since been confirmed within the scientific community! The impact will destroy between 35 and 45 Million American citizens. The event will be followed by three days of darkness. If you did not know that this event is coming, then you are warned now!

REPENT NOW! Turn back to the Lord our God and cast out that which is wicked among you! I have warned all those who read my posts that Gods' judgement was coming. Since 2008, I have warned you ALL! But few of you have believed my warnings. The destroyer is coming, beloved of our Heavenly Father. The destroyer will lay waste the wicked! They who know to do right but do it not shall not escape. May our holy Lord have mercy upon your precious souls!

You mean the murderous martyrs?

Oh the arrogance and conceit.  When will these people figure out it is bad to cover for people who run into a crowded mall or bus, shout allahu akbar, and blow up unsuspecting women and children?  And when these things happen, why are they so consistently shocked that this sort of cowardice and barbaric behavior really pisses people off? 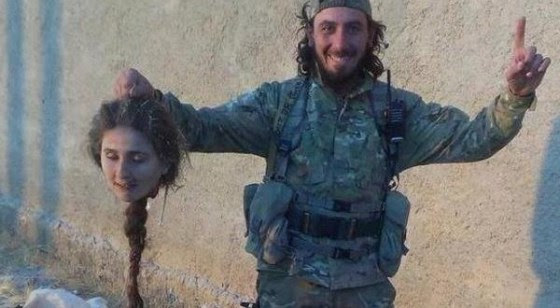 Others listed included al-Qaeda and its various affiliates in Pakistan, Syria, Yemen and North Africa; the Islamic State in Iraq and Syria (ISIS/ISIL); the Muslim Brotherhood and several of its U.K.- and Europe-based affiliates; and some Iranian-backed radical Shi’ite groups.

Conspicuously absent was Hamas, despite being the Palestinian branch of the Muslim Brotherhood (MB). Like most Arab states the UAE is a vocal supporter of the Palestinian cause.

Also not listed was Iran’s Shi’ite proxy in Lebanon, Hezbollah – a curious omission since Hezbollah-linked groups in the Gulf states and Iraq were included.

The groups were designated under legislation promulgated last August, which carries tough penalties for terrorist acts and support for terrorism.

“Whoever seeks or communicates with a foreign state, terrorist organization or with anyone who works for their interests, to commit any terrorist act, shall be punished with imprisonment for life while the death penalty will be imposed if the terrorist act has been carried out,” it states.

CAIR said it was seeking clarification from the UAE about the “bizarre and shocking” report on its designation.

“There is absolutely no factual basis for the inclusion CAIR and other American and European civil rights and advocacy groups on this list,” it said in a statement. “Like the rest of the mainstream institutions representing the American Muslim community, CAIR’s advocacy model is the antithesis of the narrative of violent extremists.”

CAIR called on the UAE government to remove from the list itself, MAS, “and other civil society organizations that peacefully promote civil and democratic rights and that oppose terrorism whenever it occurs, wherever it occurs and whoever carries it out.”

MAS said it was “shocked” to learn about its designation, was seeking official clarification from the UAE, and wanted to seek U.S. government help “to address this issue.”

“The Muslim American Society is a religious community service organization that serves people in the United States,” it said. “We have no dealings with the United Arab Emirates, and hence are perplexed by this news.”

Both CAIR and MAS have been dogged by controversy over the years.

CAIR was named by the Justice Department in 2007 as “unindicted co-conspirators” in its case against the Holy Land Foundation in Texas, whose leaders were convicted the following year of raising money for Hamas. One of the convicted men, Ghassan Elashi, was founder of CAIR’s Texas chapter. He was sentenced to 65 years’ imprisonment.

CAIR maintains that the “unindicted co-conspirators” label holds no legal weight “since it does not require the Justice Department to prove anything in a court of law.” It describes Elashi as a person “once briefly associated with one of our more than 30 regional chapters.”

CAIR receives plentiful media coverage as it campaigns against what it views as anti-Muslim discrimination in the U.S., while denigrating some of its more prominent critics as “notorious Islamophobes.”

The MAS was founded by Muslim Brotherhood members in the early 1990s.

Although it states that it “has no affiliation with” the MB or any other international organization, the MAS does not deny those origins, and also acknowledges the important place of the MB’s foundational texts.

In some cases, however, it says critical evaluation of MB writings “resulted in identifying many areas where such literature was deemed irrelevant or unacceptable to Muslims in America and therefore should not be part of any foundational thought …”

The MAS stresses that this re-examination of the literature is not an attempt to “demonize” the MB, which it describes as “a very broad, diverse movement, present in many countries, with various leanings that cannot be painted with one broad brush.”

The American Islamic Forum for Democracy (AIFD), whose president Zuhdi Jasser is a CAIR critic who has been repeatedly targeted by the group, said its inclusion on the UAE terror list would ideally “cause individuals associated with these groups and broader American society at large to see these organizations for what they really are: purveyors of Islamist apologetics and the malignancy of supremacism.”

“Unfortunately, however, this list will do no such thing,” it said. “Rather, it places CAIR in exactly the position they most enjoy: that of the victim.”

AIFD cautioned against welcoming the UAE move, however, saying repressive regimes like the UAE, Egypt during the Mubarak era and now under President Abdul Fattah el-Sisi, and the Assad regime in Syria, act against groups not in order to advance liberty, but “to advance their own tyrannical agendas whilst empowering Islamist groups behind the scenes.”

“The UAE, Qatar, Saudi Arabia and other Arab monarchies advance core Islamist beliefs but just want a single tribe to control the Islamist government rather than a populist movement.”

Differing views on the Brotherhood

Like its Gulf state neighbors the UAE views the Islamist MB – which ruled Egypt for a year until ousted by the military in July 2013 and has branches across the region – as a security threat.

Qatar, a longstanding MB supporter, has been the exception, and last March the UAE, Saudi Arabia and Bahrain withdrew their ambassadors from Qatar to protest that policy.

The Obama administration, which cooperated with the MB in Egypt during its year in power there – too closely, in the view of some critics – does not regard it as a terrorist group

Alluding to the MB, a senior State Department official in a speech in Qatar last June appealed for decision makers in the region to draw a distinction between Islamists and terrorists, arguing that lumping them together was making the fight against violent extremists harder.

A British government-commissioned review into the MB was reported last month to have concluded that it was not involved in terrorism.

Both Egypt under el-Sisi and Saudi Arabia have designated the MB as a terrorist group.

If you want to right a wrong and be rid of organizations like CAIR and MAS then America needs as our next POTUS, Dr. Ben Carson.  Here is the WHY:  Chris Wallace asked Ben Carson Permalink Reply by Steven BENOIT on November 17, 2014 at 7:47am
Hezbollah is given a pass to keep us focused on Iran which is also a dead end. They have us looking in all the WRONG directions. The Tea Party is just another diversionary resource for them to use. They have put the left against the right and now they have put the Tea Party against the left and the right. Just look at some of the posts on this website. Full of hate and biggotry just like all the other blogs, left and right. People, we have to quit playing "their" game, because it's working ! This country is being set up to be their hammer !