Rand Paul calls for declaration of war against Islamic State

Sen. Rand Paul of Kentucky, one of the sharpest Republican critics of President Obama’s strategy to combat the Islamic State terrorist group, is now calling for a formal declaration of war, saying it cannot be initiated without Congress.

Mr. Paul, a likely GOP presidential contender who has tried to shirk the label of “isolationist” some have foisted upon him, would limit military action to one year and restrict the use of ground troops, The New York Times said.

“War cannot be initiated without Congress,” he told The New York Times.

“Conservatives are mad at him about immigration. And they’re mad about him using executive authority on Obamacare,” Mr. Paul said of Mr. Obama. “But this is another example where he doesn’t have much respect for Congress, and some conservatives don’t quite get that.”

The White House has said the campaign against the Islamic State is justified under a 2001 authorization of force passed in the wake of 9/11 and a 2002 authorization for Iraq, but Mr. Obama has said he plans to seek a new one from Congress for the campaign against the Islamic State, also known as ISIS or ISIL, in Iraq and Syria.

The president has said he will ask Congress for the explicit authority to fight the Islamic State, though administration officials have insisted that he has the legal power to continue the current campaign. That position has rankled many in Congress who are concerned that the White House has been waging war without the proper oversight or accountability.

Mr. Paul of Kentucky has asked Congress to declare war — something it has not done since World War II — on the Islamic State. 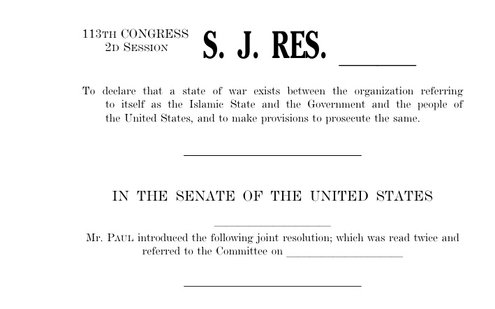 Mr. Paul said Congress had ceded too much authority to the president because it had not been able to agree on a war policy of its own.

“War cannot be initiated without Congress,” he said, acknowledging that efforts to set legal limits on the scope of the military campaign would face resistance from within his own party. He argued that conservatives should be more consistent in their criticisms of Mr. Obama’s use of executive authority.

“Conservatives are mad at him about immigration. And they’re mad about him using executive authority on Obamacare,” Mr. Paul said. “But this is another example where he doesn’t have much respect for Congress, and some conservatives don’t quite get that.”

A spokesman for the National Security Council declined to comment on the Paul proposal but said Mr. Obama believes “we are strongest as a nation when the executive branch and Congress work together on matters involving the use of U.S. military force.”

Mr. Paul faces doubts within the Republican Party, particularly among those who take a more traditional interventionist approach, that he is trustworthy on matters of national security and defense. He has sought to shake the “isolationist” label that he believes is unfairly attached to him because of the noninterventionist views of his father, Ron Paul.

“All I want people to do is report the truth,” he said, “and for opponents to know the truth.” He added that much of the criticism is based on misperceptions of his worldview. “The truth is it’s a ridiculous sort of parlor game,” he added.

The debate in Congress over the American effort in Iraq and Syria is likely to revolve around how much lawmakers limit the president’s authority and how they attempt to settle a disagreement over the White House’s justification for its airstrikes so far.

The administration has said that it is covered under two existing laws: a 2001 authorization passed after the 9/11 attacks, which Mr. Obama has invoked to carry out strikes against suspected terrorists in Yemen and Somalia, and a 2002 authorization sought by President George W. Bush for the Iraq war.

There are differences of opinion in Congress about what to do with those two laws. Mr. Paul’s resolution would repeal the 2002 authorization and terminate the 2001 law after one year. But some lawmakers say those moves would tie the president’s hands as commander in chief.

A proposal by Senator Tim Kaine, Democrat of Virginia, would set similar limitations, though Mr. Kaine does not seek to repeal the 2001 law, nor does he seek a formal declaration of war. His resolution would also expire after one year, forcing Congress to revisit the issue. And, like Mr. Paul’s proposal, it would preclude the military from sending in ground forces except in very specific circumstances, like the pursuit of a high-value target.

“Rand and I, we see very closely on this issue,” Mr. Kaine said in an interview on Friday. “We both feel like you can’t have a war without congressional authorization of some kind. Congress cannot just let this power rest down at one end of Pennsylvania Avenue.”

Some conservatives may balk at setting up a narrow set of parameters for the president. Senator James M. Inhofe of Oklahoma, the senior Republican on the Armed Services Committee, has introduced a resolution that would give the president “all necessary and appropriate force” to defend the country against the Islamic State but would require him to report back to Congress on the effort every 90 days.

WOULD RATHER SEE A DECLARATION OF WAR AGAINST THE BUMMER, SEE HIM ARRESTED AND HUNG.

SOAP sent you a message.

The immediate danger is from south of the rio grande, not the middle east. rand paul is trying to distract us from the economic and moral degradation caused by the invasion of latinos who are here for the freebies. If we don't preserve our country's moral code and system of government-terrorists in the middle east are irrelevant. We need to re-establish our economic freedom and begin to prosper again. (rid ourselves of obamacare and all of the secret taxes, like the federal tax on used cars and the 4% federal sales tax on real estate. The sneaky scumballs in congress, like rand paul, want to keep spending money and giving to their friends on wall street etc.) Don't be fooled by them again.

The American people know this and it pisses rand paul off; he wants the degeneracy from south of the rio to continue.