Sen. John McCain, R-Ariz, has announced that his brain cancer diagnosis is looking grim, describing his prognosis as “very poor.”

Still, McCain is battling the illness with courage and a positive attitude.

“(The doctors) said that it’s very serious. That the prognosis is very, very serious,” McCain explained to Lesley Stahl of the CBS program 60 Minutes in an interview that aired Sunday. “Some say 3 percent, some say 14 percent. You know, it’s a very poor prognosis. So I just said, ‘I understand. Now we’re gonna do what we can, get the best doctors we can find and do the best we can.’ And, at the same time, celebrate with gratitude a life well lived.”

Though McCain admitting to fearing the future, he reiterated that he is happy to have lived a “great life.”

“I have feelings sometimes of fear of what happens. But as soon as I get that, I say, ‘Wait a minute. Wait a minute. You’ve been around a long time, old man. You’ve had a great life. You’ve had a great experience.’ I want — I want — when I leave, that the ceremony is at the Naval Academy. And we just have a couple of people that stand up and say, ‘This guy, he served his country,'” he said.

McCain was diagnosed in July with glioblastoma, an aggressive form of brain cancer. Doctors discovered the presence of cancer after removing a blood cot above the 81-year-old’s left eye.

Since the diagnosis, doctors have been fighting the disease with a combination of radiation and chemotherapy.

McCain, a longtime senator and the 2008 Republican nominee for president, has been showered with support since it revealing his diagnosis. Politicians from both sides of the aisle have wished him well.

John McCain is an American hero & one of the bravest fighters I've ever known. Cancer doesn't know what it's up against. Give it hell, John.

John and I have been friends for 40 years. He's gotten through so much difficulty with so much grace. He is strong - and he will beat this.

Incredible progress in cancer research and treatment in just the last year offers new promise and new hope. You can win this fight, John.

Spoke this morning with @SenJohnMcCain re: his health, tax reform, Syria. A true "Timex hero”: He takes a licking and keeps on ticking.


While many have put aside politics to wish McCain well, he has still not been able to completely avoid criticism while serving the in the upper chamber of Congress.

Following his diagnosis over the summer, McCain had returned to the Senate to vote down a GOP health care bill that would have repealed major parts of Obamacare.

McCain once again broke away from his party to announce his opposition to the latest GOP health care legislation sponsored by his close friend, Sen. Lindsey Graham, R-SC., and Sen. Bill Cassidy, R-La.

Some have suggested that McCain’s health prognosis has influenced his perspective on the recent health care bills. 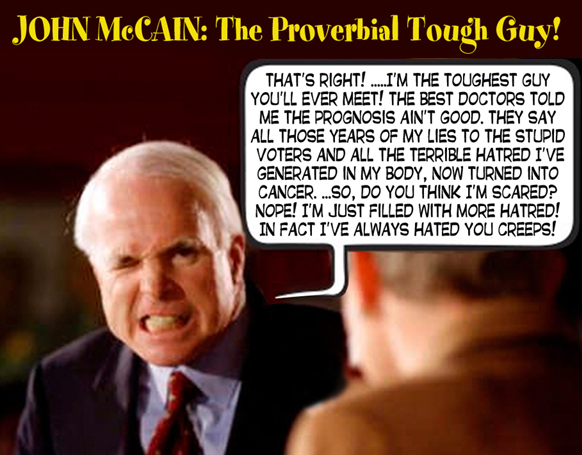