Here’s why Somali Muslim Refugees are moving to Cheyenne, Wyoming, Prepare to be shocked 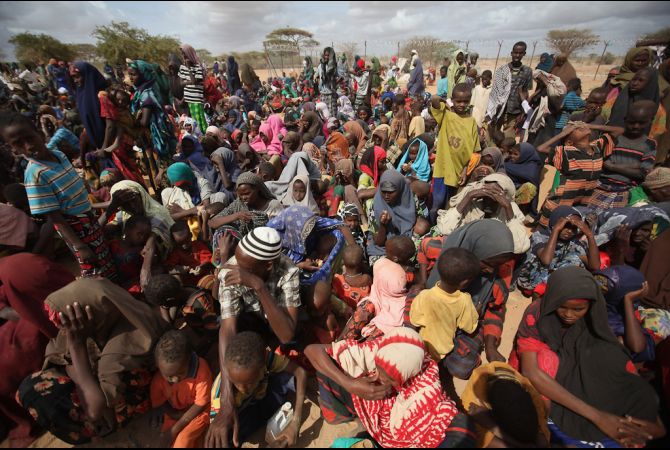 They are going there to get subsidized Section 8 housing vouchers to take to another state.

Refugee resettlement is a euphemism for importing whole Muslim communities, importing jihad. I have long documented the targeting of gateway cities (smaller cities) overwhelmed with Muslim refugee immigration from countries like Somalia — cities like Emporia, Kansas, Nashville, Greeley and Fort Morgan, Colorado, Lewiston, Maine et al. The over-saturation and drain on city resources has driven these immigrants northward to settle in Wyoming, according to these reports.

Most Americans are unaware that under the “Refugee Resettlement Program,” whole Muslim communities from hostile nations are imported into the United States, circumventing whatever immigration laws that are still intact.

This is made even more dangerous by what organization determines who are refugees and who aren’t. It’s the UN, driven largely by the world’s largest international body, the Organization of Islamic Cooperation (OIC). The OIC is a modern-day caliphate made up of 56 countries and the Palestinian terrorists.

For years, a handful of my colleagues and I have warned of the reckless immigration polices here in America and in the West — refusing immigration status to persecuted religious minorities (Christians) under Islam (Afghanistan, Iraq, Syria, Egypt, etc.), while allowing whole Muslim communities from jihad nations to immigrate.

One can only hope so.  I hope they can't get used to the harsh winters up north.

This article along with a link to the comments here needs to be sent to every member of Congress with a request that these programs be halted and that these REFUGEES be relocated to their country or origin... all government aid needs to be terminated and should not have been started.  Any aid for these supposed 'Refugees' can be given to them in their own country.... bringing them to the US constitutes an invasion; an attempt to force global multiculturalism upon our people by stealth.  These 'Refugees' are making no attempt to assimilate they are in fact creating alcoves of foreign power and sedition within our nation.  These programs must be exposed for what they are... a threat to our National Security and an invasion of our Nation funded by our members of Congress.

The Mosques need to be seized under the RICO Act as Islam is a seditious religion... a treasonous faith that requires its tenants to renounce all allegiances to the United States in support of a world wide Islamic State (Caliphate).  Islam is at war with every other religion and government.  We must not allow it too continue as part of our American culture... there is no room for those who will not support our Constitutional form of Government.

Any Naturalization of Muslims must be revoked... their oath to forsake all other allegiances to potentates, powers, or soverigns is in direct conflict with their oath to Islam ... they must either renounce Islam ... stop practicing it and demonstrate by deeds that they have renounced Islam or any claims to US Citizenship must be revoked 'permanently'.

I am entirely in with you on this one.  No law supersedes our laws, or the Constitution.  If they can't live with that then deport them.  Do not come here to try and change our country.  It is OUR country!

If we are at war with terrorism, with isis, then destroy them. As Grant remarked, "The art of war is simple enough. Find out where your enemy is and attack him....." I am paraphrasing of course. But go after him. relentlessly

We love to make problems complicated. That way we can "study" them. We even study them while they announce that they will destroy us, and behead American captives. We do nothing. We embolden them to do more and more.

We won't even confront our own president. By the way, who is that weak coward in an officers uniform greeting BO when he comes down the ramp. Who is he? An example of our military?

The FBI is charged with being an investigative entity funded by us, the people, with tax money. Does anyone think that they are actively investigating BO? Who do they work for? The American people, who pays them, or a president who is himself engaged in acts of treason and other criminal acts against public law. Who do they owe their allegiance to?

I know, personally, an FBI agent in charge of an office in the Southern part of the country. Not Florida, either. While many do not support BO their negligence in  fact finding towards his criminal acts, including outright treason, are inexcusable. And that is exactly what they are doing in regards to him, Holder, and others. NOTHING. They, like the military, can do nothing unless directed by the Director, the commander, who apparently is in league with the chief. As a member of either, military or FBI, you, as an individual, have a choice. Either play ball or resign.

Contacting the FBI with charges of treason is not effective, nor will it bear fruit, All it does is put your name out there as a potential, meaning possible problem child. I am not saying don't. I am saying not effective.

Congress must impeach. It is the only lawful, Constitutional remedy available. That's it. If that is not done (and it matters not whether he is convicted by the Senate) then the only other means is revolt.  If Congress would impeach this petulant little treasonous twerp it would virtually destroy him and his entourage. He would be reduced to just another Clinton, another loser in the history of the presidency. He couldn't take it.

That is my view.

Nobody has done anything about this in years. We have had numerous reasons to impeach him, but it is not happening. What makes us think that it will happen now? Who will pick up the case? Boehner? McConnell? Our country is lost. We are taking it lying down and rolling over. Nobody is doing anything about it, not even people here on this website who are only venting. What has happened to our backbone?

We need bold leadership... capable of organizing and funding a viable counter to the corruption in both political parties.  So far that has not occurred.  The People will respond to a well organized and funded movement for government reform... However, the leadership has not materialized and those that would lead don't have either the funds or the name recognition too attract the funding.

America is dying a slow but certain death for lack of moral leadership... and funding.  It takes resources, funding and access to the public forum too be effective.  The Patriot Movement has insufficient resources and access is being denied by the MSM... the alternative media is proving insufficient to the task at hand.

The masses remain largely ignorant of the situation our nation faces... hence, they are reluctant to MOBILIZE in the numbers needed to compel reforms.  There is strength in numbers and the ability to mobilize those numbers with boots on the ground... and in the streets of America protesting. That is not happening and when it does it is only for very brief and fleeting moments.

The Patriot movement must develop the ability to sustain massive protests for weeks if not months at a time... we must be able to develop system of strikes and public demonstrations that are capable of slowing down large sectors of the economy and impacting the government in a peaceful and constructive manner.

Colonel Nelson, we cannot even win a landslide election and get representative government. We elected more "Republican" goons and thugs who are only concerned about the LATINO voters who they want to impress. We have NO REAL MEN in Congress. We have sissies and wannabees. Of course we are a dying nation. We have no more patriots. Men and women go into politics for a life time gig of self-importance. Do you think the signers of the Declaration of Independence had such low morals?

Get ready to take that Spanish IV course you replaced with Western Civ in your college days. Western Civilization is white privilege and probably no long offered.

We won the election and it looks like we still lost the war. Amnesty will destroy America! I am not going to be a part of the reading of the obituary and will, so I am signing off the Tea Party is amnesty passes and the Republican slugs we elected do nothing. They are pure slime!!!! No point going around being Chicken Little's anymore.

Now hold on Jo Anne. As Yogi Berra said, "it aint over till its over". I personally think that Obama is playing a bluff as far as the "amnesty" thing is concerned. There are quite a few real patriots in the congress and more in January. The real problem is in the congressional leadership. Things can change dramatically in January. It is also my opinion that Boehner and McConnell have set themselves up for a fight by holding a vote and pre-selecting the leadership posts before the 40 new House members and the 10 new Senators are in office. That should be protested by the real patriots in those organizations and the new members in January. By doing that, they have dis-enfranchised those new members and thier constituents of representative government. That is a total violation of our Constitutional system. Lets not let them get away with that come January. In my mind, Boehner and McConnell have commited a criminal act in order to stay in power. Those two are as reasponsible for where our country is today as is Obama. Boehner could have and should have used the power of the purse and stopped Obamacare. This has cost American taxpayers billions of dollars not to mention the terrible situations it has created. They should have been on the gallows a long time ago. If they do not stop Obamas dictatorial moves by denying funding, we should hold a hanging party. Theyt can not hold a "Legal" vote for the next session without all of the members participating in the voteing. And, they can not participate until they are sworn in. You can not have more than 435 members in the House of Representatives and more than 100 members in the Senate as apportioned under law.

W, all the protocol and laws say that Obama CAN do it! Read the Economist and you will read the future of the United States. The Republican Congressmen are stone-walling for the benefit of we irate voters. This is the End Of America and we know it...as does Obama.

The only man who has any clue about what to do is Jeff Sessions, and I heard gossip that Republicans were thinking of replacing him as ranking member of the Senate Budget Committee. What does that tell you? If they don't do what Jeff says to do, they are not representing me and I am off to Chapter Two of retirement - like pulling weeds. More satisfactory because I can actually get rid of those robbing from my plants.

If things do not changein the next 45 days, then we should lock and load if we have not already. I know this, plenty of them will go with us. The a holes that start fights are the biggest chickenshits.

Unfortunately and sadly.....I think this is what it will come to. PHYSICAL removal.  Course, if we knew where all these idiots plan to hideout or run off to after they've destroyed this country, maybe we should demolish them so they've got no retreat...