If ever an elected Congressional House member made a more absurd and outlandish statement about the DACA fiasco, Nancy Pelosi takes the cake.

Senator Bernie Sanders (D-VT) said, “It’s inhumane to not give Dreamers an amnesty.”  But he made no attempt to enforce our borders or work laws for two decades in Congress.

First of all, Congress and the past five presidents created the DACA nightmare.  None of the presidents and none of the Congresses enforced America’s laws by stopping illegal aliens at our borders, and failed to enforce our employment, transportation and housing laws that specifically make it a federal violation to employ, transport and/or house an illegal alien.  It costs them $2,000 per illegal hired and up to five years in prison.

Those elected representatives failed since the 1986 amnesty that allowed 4,000,000 (million) illegals instant citizenship for breaking our laws.  It never addressed the employers drawing those illegals into America.

While Senator John McCain, (R-AZ) promised us enforced borders, he did nothing in the past 31 years to defend our country.  He wasn’t alone, Pelosi failed us, also.  Our presidents failed us.  All of them!

Secondly, Barack Obama violated Constitutional Law by creating an unlawful DACA executive order that could not and does not stand in a court of law.  How did he succeed in giving 850,000 “Dreamers” a gift?  Congress feared racial uprising, pure and simple for the first black president.

Unfortunately, according to www.NumbersUSA.org, illegal aliens, their wives and children cost American taxpayers $296,000,000,000.00 (billion) year after year after year.  As long as the profits roll up to the CEO’s across America, they use their influence to keep the borders open for all to cross.

Congress and presidents make certain ICE and the Border Patrol cannot do their jobs.  Congress creates protocols of catch and release.  They make certain illegal aliens make it across the border.

Former Speaker John Boehner, (R-OH), purposefully squashed any chance for E-Verify to become law and House Speaker Ryan, (R-WI) continues along that same path.  Our own leaders knowingly suppress any chance for enforcing our laws with E-Verify.

But of course, illegals brought their children to create a “purgatory” for them and a nightmare for American taxpayers. Obama played on everyone’s emotions.  However, as a U.S. Senator, he did nothing to stop the invasion.  As president of the United States, he facilitated ever-greater numbers of illegal immigrants.

Today, we face an enormous conundrum: if we give amnesty, then more illegals will cross with their kids.  We already pay for 350,000 ‘anchor babies’ annually, but DACA presents a greater threat down the road:  every DACA child may ‘chain-migrate’ his or her entire family. That could mean another six to eight million people added to our population.  The cost to American taxpayers screams off the charts.

Amnesty must begin with provisos:

In reality, the majority of Dreamers run from their twenties and into their thirties.  They are not kids.  They knowingly broken our laws for decades, but did nothing to change their status.

If Congress gives them a free pass, you may expect another run on the border for desperate people around the world to come to America illegally.

One prominent journalist said, “Besides, is there anyone who believes we can ignore the law this time, but then 10 years from now kick millions of illegals out of the country who supposedly came here as children? It’s not going to happen because we’re setting a precedent for ignoring the law in this situation. Either we’re going to enforce the law or we’re going to have this exact same problem down the road, except even worse. Ronald Reagan was suckered into a “one-time” amnesty in return for promises of security that were never delivered. How can Republicans in Congress be so stupid as to learn nothing from his example? Fool us once, shame on you. Fool us twice, shame on us.”

Give them guest worker visas good for a certain amount of time, say 10 years. If they perform, take no welfare, maintain jobs and keep a lawful record—consider them for citizenship with the proviso that they cannot chain-migrate any of their family members and that their parents must be deported for breaking our laws.  (Please realize their parents are part of the 20 million illegals within our country breaking our laws daily.)

Force Congress to enforce our borders and our internal employment laws with E-Verify. Cut off the source of the draw for illegals.

Enforce our employment laws internally by allowing ICE to check all identification of workers at plants and companies around the country.

We either maintain our laws and our borders, or, we lose our country to ever increasing millions of illegal migrants. 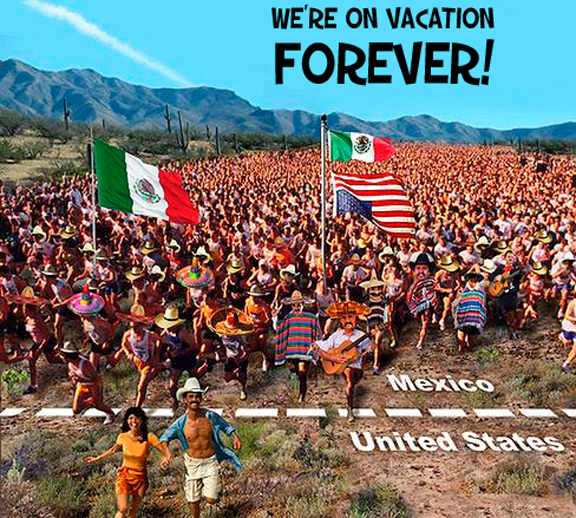