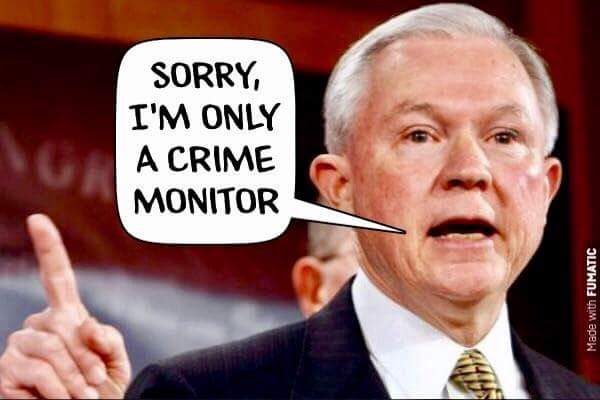 WHY IS SESSIONS HIDING URANIUM ONE INFORMANT?

Perhaps as startling as the revelation that the FBI was investigating the Hillary Clinton/Russia/Uranium One collusion  and that key figures like Deputy Attorney General Rod Rosenstein, Special Counsel Robert Mueller and Deputy FBI Director Andrew McCabe knew about it and said nothing, is the refusal by Attorney General Jeff Sessions to remove the non-disclosure agreement gag order on the FBI informant who arguably could put Bill and Hillary Clinton and a few others in federal prison.

It was said the Jeff Sessions recused himself from all things Russian because of election campaign conflicts but is it really because he thought it would insulate him from having to divulge what he knew about Uranium One and the people who at the very least knew about the deal, some who approved the deal, including past and present members of the FBI, the DOJ, and Special Counsel Robert Miller’s team? Is Jeff Sessions part of the Uranium One cover-up? If not then he needs to explain why he is thus far refusing Sen. Chuck Grassley’s request to lift the gag order imposed by the Obama administration as part of the Uranium One cover-up :

A top Senate Republican is calling for the Justice Department to lift an apparent “gag order” on an FBI informant who reportedly helped the U.S. uncover a corruption and bribery scheme by Russian nuclear officials but allegedly was “threatened” by the Obama administration to stay quiet….

“Witnesses who want to talk to Congress should not be gagged and threatened with prosecution for talking. If that has happened, senior DOJ leadership needs to fix it and release the witness from the gag order,” Grassley said in a statement.

Victoria Toensing, a lawyer for the former FBI informant, told Fox News’ “America’s Newsroom” that her client has “specific information about contributions and bribes to various entities and people in the United States.”

She said she could not go further because her client has not been released from a nondisclosure agreement but suggested the gag order could be lifted soon. Toensing also claimed that her client was “threatened by the Loretta Lynch Justice Department” when he pursued a civil action in which he reportedly sought to disclose some information about the case.

In a letter sent Wednesday to Attorney General Jeff Sessions, Grassley said such an NDA would “appear to improperly prevent the individual from making critical, good faith disclosures to Congress of potential wrongdoing.”…

The Hill reported earlier this week that the FBI had evidence as early as 2009 that Russian operatives used bribes, kickbacks and other dirty tactics to expand Moscow’s atomic energy footprint in the U.S. Grassley on Wednesday released a series of letters he fired off last week to 10 federal agencies, raising the question of whether the Committee on Foreign Investment in the United States (CFIUS) which approved the uranium transaction was aware of that FBI probe -- and pointing to potential “conflicts” involving the Clintons. The committee included then-Secretary of State Clinton.

So why not just lift the gag order, vacate the non-disclosure agreement, which Sessions has the power to do, and key the informant come forward with information on how and why the Clintons conspired to put 20 percent of our uranium assets under Russian control while lining the pockets of the Clintons and their pay-for-play foundation? As Toensing notes, Sessions could do it, and thereby bring to light the details of this criminal enterprise:

Attorney General Jeff Sessions recused himself from the collusion/campaign investigation.  He could waive the Non-Disclosure Agreement (NDA) signed by the informant, said Toensing. "Yes, Jeff could do it," she said. "He is not recused from this matter and should not be."

However, Rod Rosenstein "is conflicted," said Toensing, "because he was the U.S. attorney who oversaw the case involving my client."  Toensing added that she has "asked an oversight committee to pursue the release" of the NDA so her client may testify before Congress about what he knows.

In lifting the gag order, Sessions might have to explain the real reasons behind his recusal and why people who knew of actual collusion between Russia and the Clintons were silent, only to reappear to investigate and pursue prosecution of non-existent collusion between Russia and Team Trump. He might have to explain why Mueller, McCabe, Rosenstein and other were allowed to hide the truth from the American people and why they should not be summarily fired. As Grassley notes, neither Sessions or anyone in the Justice Department has the authority to block the informant from testifying before Congress or issue non-disclosure agreements to thwart Congressional oversight:

“The Executive Branch does not have the authority to use non-disclosure agreements to avoid Congressional scrutiny," Grassley wrote. "If the FBI is allowed to contract itself out of Congressional oversight, it would seriously undermine our Constitutional system of checks and balances. The Justice Department needs to work with the Committee to ensure that witnesses are free to speak without fear, intimidation or retaliation from law enforcement."

Again, perhaps the reluctance of Jeff Sessions stems from the web of deceit and complicity that ensnares many in the FBI and the Justice Department. As Fox News analyst Gregg Jarrett notes on the Uranium One scandal:

It seems it was all covered up for years by the same three people who are now involved in the investigation of President Donald Trump over so-called Russian “collusion.”…

But why has there been no prosecution of Clinton?  Why did the FBI and the Department of Justice during the Obama administration keep the evidence secret?  Was it concealed to prevent a scandal that would poison Barack Obama’s presidency?  Was Hillary Clinton being protected in her quest to succeed him?

The answer may lie with the people who were in charge of the investigation and who knew of its explosive impact.   Who are they?

Eric Holder was the Attorney General when the FBI began uncovering the Russian corruption scheme in 2009.  Since the FBI reports to him, he surely knew what the bureau had uncovered.

What’s more, Holder was a member of the “Committee on Foreign Investment in the United States” which approved the uranium sale to the Russians in 2010.  Since the vote was unanimous, it appears Holder knowingly and deliberately countenanced a deal that was based on illegal activities and which gave Moscow control of more than 20 percent of America’s uranium assets.

It gets worse.  Robert Mueller was the FBI Director during the time of the Russian uranium probe, and so was his successor James Comey who took over in 2013 as the FBI was still developing the case.  Rod Rosenstein, then-U.S. Attorney, was supervising the case.  There is no indication that any of these men ever told Congress of all the incriminating evidence they had discovered and the connection to Clinton.  The entire matter was kept secret from the American public.

It may be no coincidence that Mueller (now special counsel) and Rosenstein (now Deputy Attorney General) are the two top people currently investigating whether the Trump campaign conspired with the Russians to influence the 2016 presidential election.  Mueller reports to Rosenstein, while Comey is a key witness in the case.  It is not unreasonable to conclude that Mueller, Rosenstein and Comey may have covered up potential crimes involving Clinton and Russia, but are now determined to find some evidence that Trump “colluded” with Russia.

Boom. The question is now whether Jeff Sessions wants to help President Trump to drain the swamp be vacating the gag order and letting evidence come forth proving the Clintons orchestrated the greatest criminal conspiracy in U.S. history at the expense of American national security or whether he is just another swamp thing committed to clogging up the drainage pipes. Justice may be blind, but it should never be gagged.