When will Americans draw a line in the sand?  When is enough enough?  The federal government has one predominant responsibility, and that is to protect us.  We the people.  They seem to do everything except that.  Allowing corporations to poison our food and then make laws to protect the special interests is criminal.

The vast majority of elected representatives get wealthy during their terms.  That's not supposed to happen.  So how exactly does it?  Wall Street CEO's, food and farm corporations, unions, environmental groups and the like rain money down on politicians in return for favors.  Favors that in many cases do great harm to the nation and its people to make a small group of elite wealthy cronies more powerful, and rich.

The end result of this will, as our current president proclaimed in his election propaganda, "Fundamentally change America."  But he didn't tell us it would be from a free Republic, to a Socialist Oligarchy.  And the people, about 50% of them bought it hook line and sinker.  The current administration is blatantly without exception or apology destroying the middle class before our eyes.  And who stands up in protest?  Yes, maybe the Occupy loonies,  but they self destructed without a clear message and purpose.  So... where do we go from here?

" Good intentions will always be pleaded for every assumption of authority. It is hardly too strong to say that the Constitution was made to guard the people against the dangers of good intentions. There are men in all ages who mean to govern well, but they mean to govern. They promise to be good masters, but they mean to be masters." Daniel Webster U.S. Senator fron NY(1850)
It is clear that our government has no regard for our welfare.  The class warfare will end one way, with the middle class being taxed and burdened with regulation until we are all dependent one the elite corporations and government.  We can barely go to our E-mail without finding some sort of petition to call or write congress to do "Make the right choice," about something or other.  Really?  Is that what we have to do?  I thought we voted these people n to stand up, grow a spine, and do the right thing  for us.  That's why they make the big bucks and are compensated for life.  It is time my friends to draw a line in the sand.  Individually, or as a whole.  America's problems will never be solved from the top down, because the elite masters couldn't  care less about us.
We need to take control from the bottom up, and refuse to participate in the rules of their oligarchy.  They areNOTour masters.  and government is supposed to depend on its people, the people are not supposed to depend on their government.  Are there ways to do this?  Absolutely.  We can find every little way to not play their game, by refusing to depend on them.  If a corporation is doing us harm, starve them to death by not using their products.  I could write volumes on how to do this but the information is available for the taking on the internet.
As I write this, our private militias are ready, willing, and more than able to do what is necessary to save our Republic.  Our government is unsure of where our own military will stand when we are finally backed against the wall of survival so they have made alliances with foreign nations and private mercenary armies.  Hired goons paid to do their will when they discover that our own soldiers will stand with the people and private militia's when we are forced into servitude.
I implore every American to prepare for what is to come.  Militia leaders have already spoken before congress and warned them what American people will do if they don't back off of us now.  Each of us must become totally self sufficient now, and the government cut down to the bare necessities.  It's not a matter of Left and Right, but a matter of Right and Wrong.  We must all work together and fix this out of control government before the Tree of Liberty requires fertilizing again.
Arm yourself with knowledge, starting with the article above, and protect yourself and your loved ones, and hopefully we can prevent the next violent revolution, because it is closer than you can possibly imagine right now. 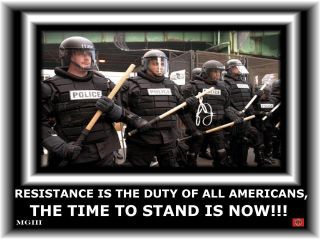 This is what they look like when they have all our guns, 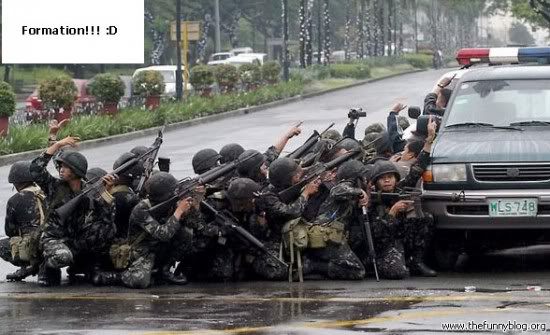 This is what they look like when we shoot back.
But do we really want to go there?  It's up to you as an American.  Each and every individual how this end game will play out.  Four more years of the current regime in charge will put us over the top.  Four more years of someone else won't be much better, it will only buy us some time.  "Ask not what your country can do for you, ask what you can do for your country." ~ JFK
E-mail me when people leave their comments –
Follow