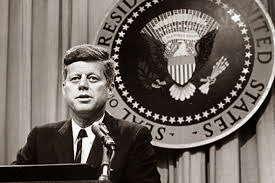 
Today we remember the life, death and legacy of John F. Kennedy, 35th President of the United States. Fondly remembered by many Americans as “Camelot.”

One of the more remarkable quotes from the brief JFK presidency was delivered during his inaugural speech on January 20, 1961, when he said:


Fifty years later, those inspiring words seem to have been lost on the American people as scores of millions, citizens and non-citizens alike, now rely on government for many of the basic needs of living.

Indeed, as indicated at the reference, 49.2 percent of Americans now receive benefits from one or more government programs:

In the fourth quarter of 2011, 49.2 percent of Americans received benefits from one or more government programs, according to data released Tuesday by the Census Bureau.

This included 82,457,000 people--or 26.9 percent of the population--who lived in households in which one or more people received Medicaid benefits.

Today, politicians vigorously encourage an entitlement mentality as a means for securing and retaining political power. All too often, Americans are brainwashed to believe that government perks (paid for by others), are guaranteed by the US Constitution and are, therefore, inalienable.

This sort of government insanity even extends beyond the US borders.

For example, the United States Department of Agriculture(USDA) broadcasts information, in Spanish, about the availability of food stamps into Mexico, either as a service to the illegal alien population living in the US and/ or as a lure to attract even more invaders.

Again, the perks are advertised with no mention of whom pays the bills.

And we wonder why the economy is in shambles and the national debt is completely out of control?

America would be greatly served by a return to the Ask Not What Your Country Can Do For You…” ideal in the Oval office and in the halls of Congress!