Is Andy "the Andy-Christ" Stern the power behind the WH? 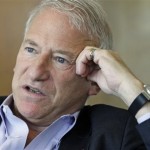 In an op-ed former SEIU president Andy Stern wrote about the “Founding Fathers”..
He went back, way back, to the time of powdered wigs and the Federalist Papers.

His thesis: you know those checks and balances the old guys put in place? Yeah, they’re just kind of getting in the way of change.

“American democracy has layers of power and responsibility, which James Madison rationalized in Federalist, no. 51 as a check against possible tyrannical rule,” Stern writes. “Our Founding Fathers saw fit to divide power between two strata — state and federal. Then, within the federal structure, they codified a trifurcation of power to ensure that no single branch came to dominate government; and while power has ebbed and flowed between branches, the system of checks and balances has provided stability, and kept tyrannical rule at bay.”

But today, he goes on to say, that system is just old and in the midst of the transformative change of globalization and this third economic revolution, those layers have become an impediment to making the changes necessary to keep America competitive in the world economy.

He said that our system of government, as laid out in the Constitution, is hampering his vision of a global economy.

WHITE HOUSE VISITOR LOGS
The most frequent visitor in the database is Andy Stern, president of the SEIU, the nation’s largest labor union.

In the first six months of the Obama administration Stern visited the White House at least 20 times (as Andrew L. Stern), and most likely another two times under the names Andy Stern and Andrew Stern, averaging about one visit per week.