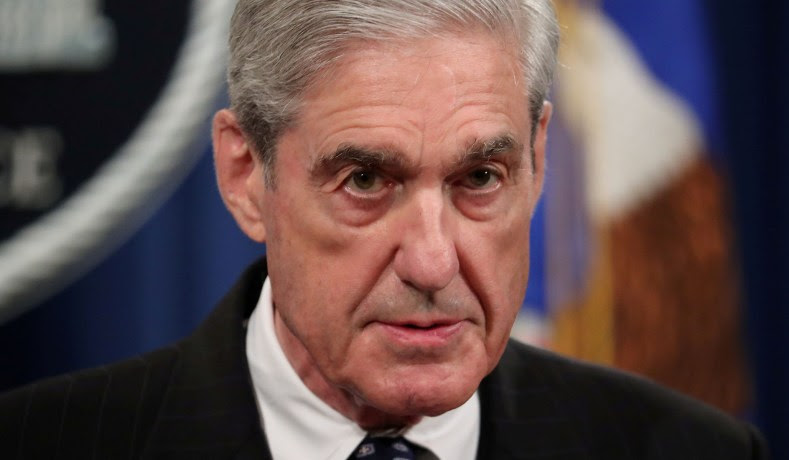 by Mairead Micardle
{ nationalreview.com } ~ Special Counsel Robert Mueller submitted his official resignation on Wednesday, announcing at a press conference that he is leaving the Justice Department, closing the special counsel’s office, and returning to private life... In his first public statement on his investigation, he stressed that he does not intend to expand on the contents of his final report after today. “It’s important the office’s written work speaks for itself,” Mueller said during the press conference. Charging President Trump with a crime was “not an option,” Mueller reiterated, since a sitting president cannot be indicted. “Under longstanding department policy, a president cannot be charged with a federal crime while he is in office. That is unconstitutional. Even if the charge is kept under seal and hidden from public view, that too is prohibited,” Mueller said, before adding that, “If we had had confidence that the president clearly did not commit a crime, we would have said so.” Mueller’s final report was delivered to Attorney General William Barr in March, and a redacted version of it was released to lawmakers and the public last month. The special counsel found that the Trump campaign did not engage in collusion with Russia, but declined to reach a conclusion on whether Trump himself obstructed justice during the investigation. Still, several congressional committees continue to conduct their own separate investigations of the matter. Democrats and Republicans have sparred over whether instances of Trump ordering his aides to have the special counsel fired, for example, constitute obstruction... Get over it dems its finished.  https://www.nationalreview.com/news/mueller-resigns-special-counsels-office-closes/
VIDEO:  https://www.nationalreview.com/news/mueller-resigns-special-counsels-office-closes/?jwsource=twi
.
AG Barr Battles Intel Community And FBI. Illegal Surveillance Had Been Going On For Years. 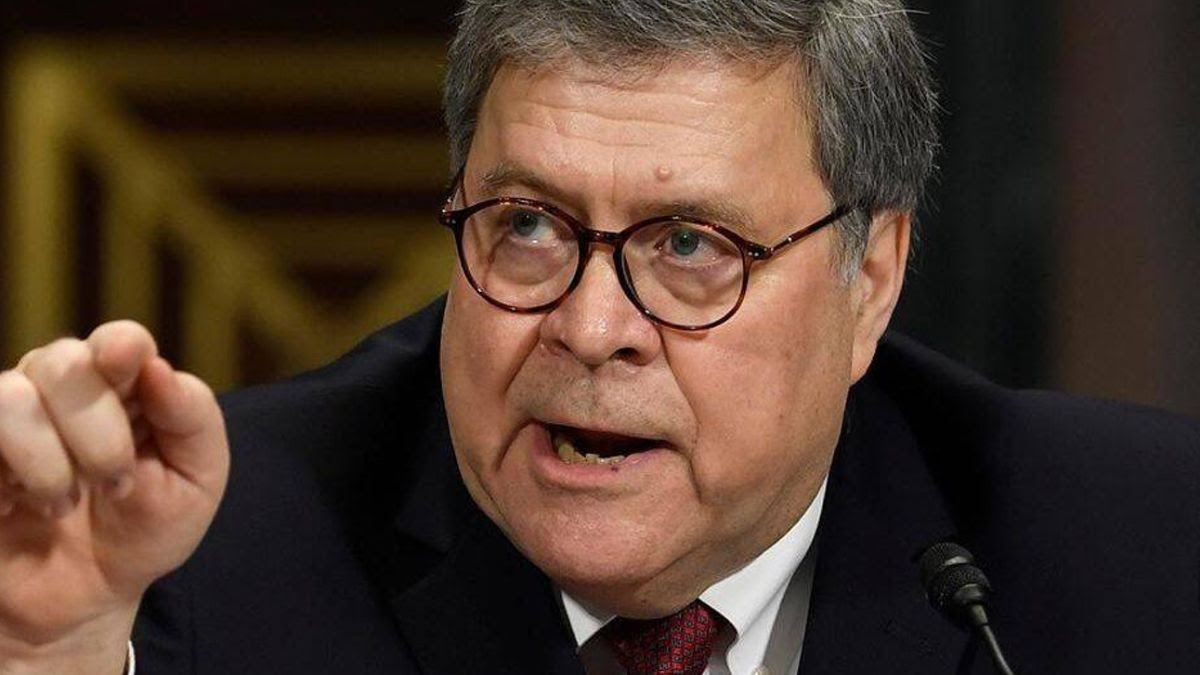 by Sara Carter
{ saraacarter.com } ~ President Donald Trump’s orders to declassify secret documents pertaining to the FBI’s investigation into his campaign in 2016... came after weeks of battles between Attorney General William Barr and senior officials within the bureau, CIA and other agencies, sources with knowledge told SaraACarter.com. Despite the president’s order giving Barr authority over the declassification of the documents related to the bureau’s investigation into the Trump campaign and Russia, it won’t be met without a fight. And there’s a reason why. This isn’t just about Trump. It’s about nearly a decade of abuse inside the intelligence community and bureau regarding foreign-intelligence-collection authority. Why? Because it was carried out to monitor communications of Americans inside the United States and the procedures meant to protect Americans either swept up in those calls or targeted were not followed. The Fourth Amendment was under attack and abused for political purposes, say several retired intelligence sources. “If the full extent of the abuse is made public the powers granted these agencies powers could be scaled back and those who allegedly abused their power could face prosecution,” one former senior intelligence official told SaraACarter.com ...
https://saraacarter.com/ag-barr-battles-intel-community-and-fbi-illegal-surveillance-had-been-going-on-for-years/?utm_source=Darkwire+Inc&utm_campaign=1b2d7e502b-May+28&utm_medium=email&utm_term=0_5f3d745e4f-1b2d7e502b-283256057
VIDEO at the site.
.
The Left Doubles Down on Defense Cuts

by William R. Hawkin
{ americanthinker.com } ~ On May 23, a coalition of left-wing groups sent an open letter to all the announced Democratic candidates for president calling for major cuts in U.S. defense spending... Under the banner of “Put People Over the Pentagon,” the 22 groups said that “it’s time to stop misdirecting hundreds of billions of dollars away from domestic and human needs to pad unnecessary budget lines for endless wars, failed weapons and the Pentagon’s corporate handouts. Doing so will make our country stronger and more just.” The amount to be cut should be "at least $200 billion annually, freeing up $2 trillion or more over the next decade for domestic and human needs priorities." The total 2019 defense budget is $686 billion, of which $89 billion is to pay for overseas contingency operations, leaving $597 billion to fund the base force structure of the armed services. This is out of a total federal budget of $4.5 trillion; meaning defense is only 15% of total spending. The leftist demand would not only end all foreign military operations which they oppose on principle but cut standing military strength by one-fifth. And they emphasis this would only be "a start" of the unilateral disarmament process. The timing of the letter could not be worse. It was sent just before Memorial Day when the nation pays tribute to those who have given their lives for their country. The 2019 Defense Budget Overview put out by the Defense Department contains a relevant quote from retired Defense Secretary Gen. James Mattis "If you don't get the resources... then your strategy is nothing more than a hallucination, because, without the resources, there's just so much brave young men and women can do." Tragically, too many serving in uniform have died needlessly because they were up against better armed opponents who had built up their forces while America allowed its capabilities to stagnate and decline. We don't need another Bataan Death March. As a share of GDP, defense spending hit 5.7% in 1985 at the height of the Reagan buildup that brought victory in the Cold War. It dropped steadily in the post-Cold War period to around 3.0% of GDP which put it on a par with the isolationist 1930s. The 9/11 terrorist attacks reawakened Americans to the fact that it is still a dangerous world, and not just because of insurgents. A rising China and a revanchist Russia have rekindled another era of Great Power rivalry which also includes their allies like Iran and North Korea. All are working hard to acquire new military capabilities. Yet, the revival of U.S. spending to meet these challenges has been slow and incomplete... These dems don't see what history has taught us.    https://www.americanthinker.com/articles/2019/05/the_left_doubles_down_on_defense_cuts.html
.
Europeans Help Palestinians
Create False Facts on the Ground

by Dov Eilon
{ israeltoday.co.il } ~ Ever heard of the ancient village Shoshkhalah? Neither had anyone else until the European Union, in concert with Palestinian nationalists, invented it out of thin air about two years ago... Today, one can find signs posted by the EU on a collection of scattered old farm watch towers declaring them to be part of an ancient "Palestinian" village. This new ancient village is located in the heart of the Etzion Bloc of Jewish settlements situated south of Bethlehem. The entire ruse is built around two "shomerot," the partially collapsed old stone guard towers and huts the farmers and shepherds had built in centuries past to provide shelter while out in the fields. Yishay Shemo of the non-governmental organization Regavim explains in a video (English subtitles) that such shomerot can be found scattered throughout the Judean hill country, but these two in particular were chosen by the Palestinians and European Union to become a "historic Palestinian village." Over the past two years, Shemo reports, Palestinian Arabs from the nearby town of Al Khader have been moving into the newly-invented ancient village with the help of the Europeans, who have financed and built 15 additional "ancient" dwellings equipped with modern niceties, like solar power and water tanks. And while the activists believe that placing the EU seal on their propaganda legitimizing the project, readily-available evidence belies their efforts. For instance, aerial photographs taken of the area in 1967 reveal that the bulk of the buildings that now exist at the site weren't there just 50 years ago. Old maps dating to the 1880s likewise make it clear that there was never an Arab village at that location. Shemo warns that this is just part of a larger scheme by the Palestinian nationalists and their supporters in Europe to create new facts on the ground in an effort to further delegitimize Israel's claims and influence the outcome of future negotiations...
http://www.israeltoday.co.il/NewsItem/tabid/178/nid/36734/Default.aspx
VIDEO:  https://www.youtube.com/watch?time_continue=1&v=wQ_F_4d_JkE
.
ICE Slams Washington for
New Law Protecting “Criminal Aliens”
by Shawn
{ fixthisnation.com } ~ In a statement, Immigration and Customs Enforcement issued blistering criticism of Washington’s new law making it the latest “sanctuary state” for illegal aliens... The agency said that while sanctuary policies, which prohibit law enforcement officials from detaining people for ICE’s deportation agents, may seem humane and kind, they are actually making the country less safe for law-abiding citizens. “ICE maintains that cooperation by local law enforcement is an indispensable component of promoting public safety,” the agency said. “It’s unfortunate that current local and state laws and policies tie the hands of local law enforcement agencies that want and need to work with ICE to promote public safety by holding criminals accountable and providing justice and closure for their victims. “Sanctuary policies not only provide a refuge for illegal aliens, but they also shield criminal aliens who prey on people in their own and other communities,” ICE continued. “When ICE officers and agents have to go out into the community to proactively locate these aliens, it puts personnel and potentially innocent bystanders at risk.” In Washington, the new law will not only bar local officials from honoring ICE detention requests but from even asking individuals about their immigration status. They are also prohibited from notifying ICE when a criminal alien is set to be released from jail. Even on the West Coast, where these laws are becoming increasingly commonplace, Washington’s move is radical...   http://www.fixthisnation.com/conservative-breaking-news/ice-slams-washington-for-new-law-protecting-criminal-aliens/
.

Political Editors:  The number of illegal aliens apprehended at the border and deemed “inadmissible” hit 103,000 in March and 109,000 in April. That’s “the highest monthly levels in more than a decade,” acting DHS Secretary Kevin McAleenan has advised Congress. McAleenan further noted that in fiscal year 2018, U.S. Customs and Border Protection had “encountered more than 683,000 illegal migrants and inadmissibles,” and “Homeland Security Investigations made more than 34,000 criminal arrests, of which 4,300 were gang-related; and law enforcement agents and the United States Coast Guard seized more than one million pounds of illegal drugs.”

The trouble is much of America hears nothing of these numbers through reports regarding the growing border crisis, because the mainstream media has for the most part chosen to simply ignore it as a non-issue. A recent study from the Media Research Center found that news coverage from the big three networks — ABC, CBS, and NBC — from January 1 to May 15 totaled 234 stories that focused on immigration. Of those stories, only 9% made any mention of the dramatic increase in the number of illegal aliens apprehended crossing the U.S. border.

Thus it’s no surprise to see that a recent Harvard/Harris poll found 87% of respondents believed the number of border apprehensions to be significantly lower than they are, with a majority of survey respondents estimating that less than 100,000 illegal aliens are apprehended per year. Remember, it now exceeds that number every month.

MRC observes, “Having the correct data changes minds: An ABC News/Washington Post poll that did not provide this context found 64 percent of respondents opposed President Trump’s February 15 emergency declaration in order to free up money for barrier construction. Meanwhile, the Harvard/Harris poll found that when respondents were told the actual rates of illegal immigration, those numbers flipped, with a majority (52%) supporting it.”

The MSM’s underreporting on significant events and issues reveals just as much of a biased agenda as does any unapologetic Leftmedia outlet pumping out straight-up fake news.  ~The Patriot Post